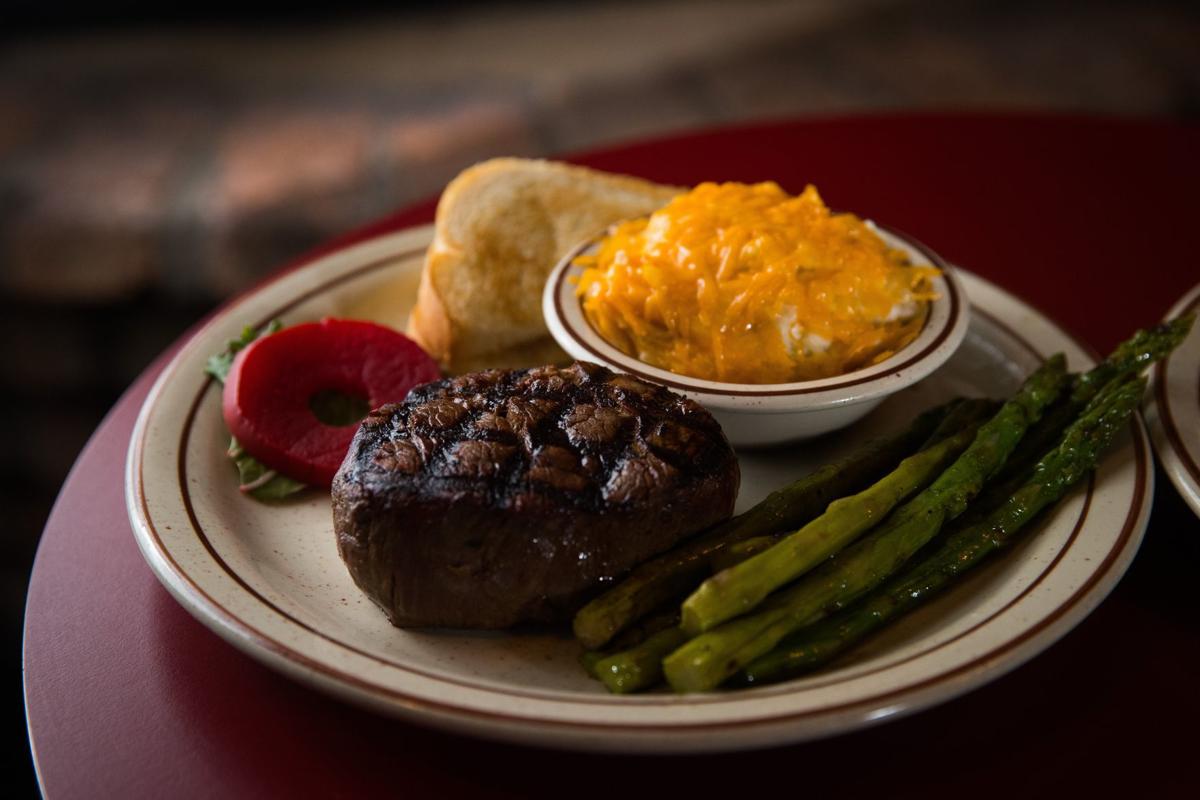 The Whiskey Filet is served with asparagus, toast and the au gratin potato casserole. 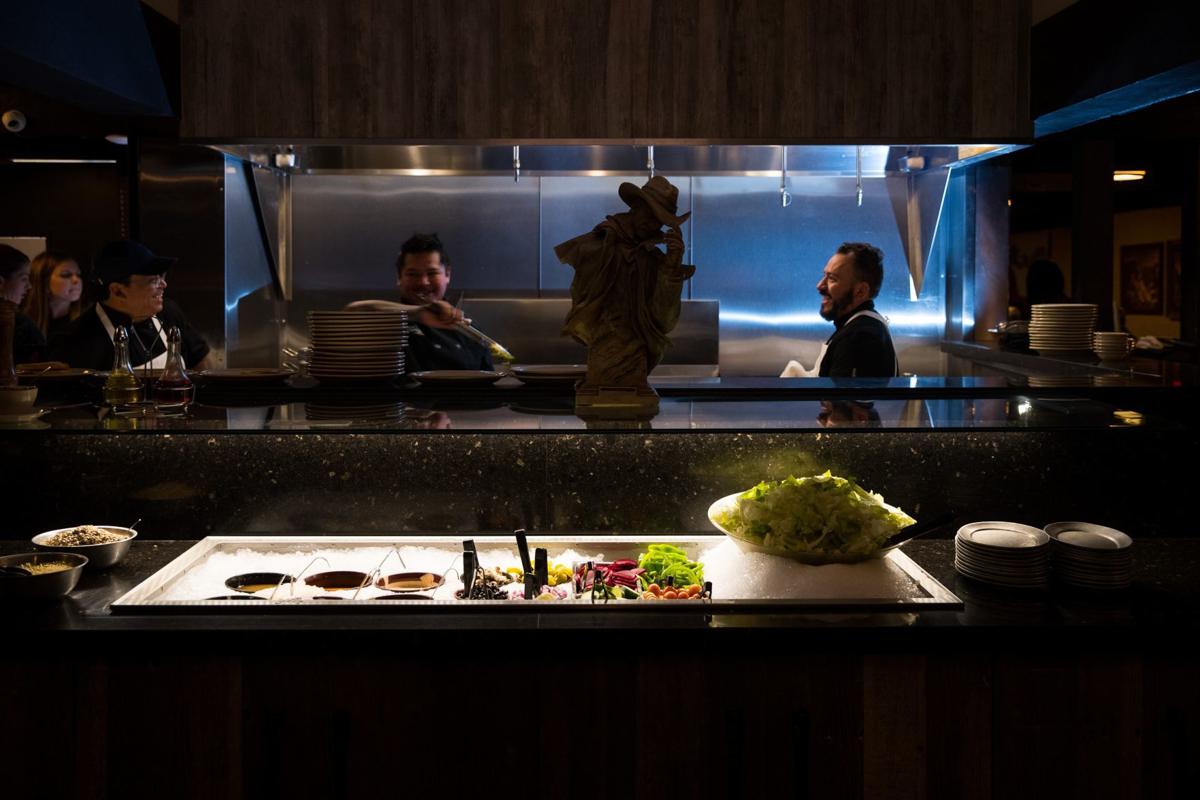 The salad bar at The Drover was damaged in a December fire. It was redone, but what it offers is the still the same. 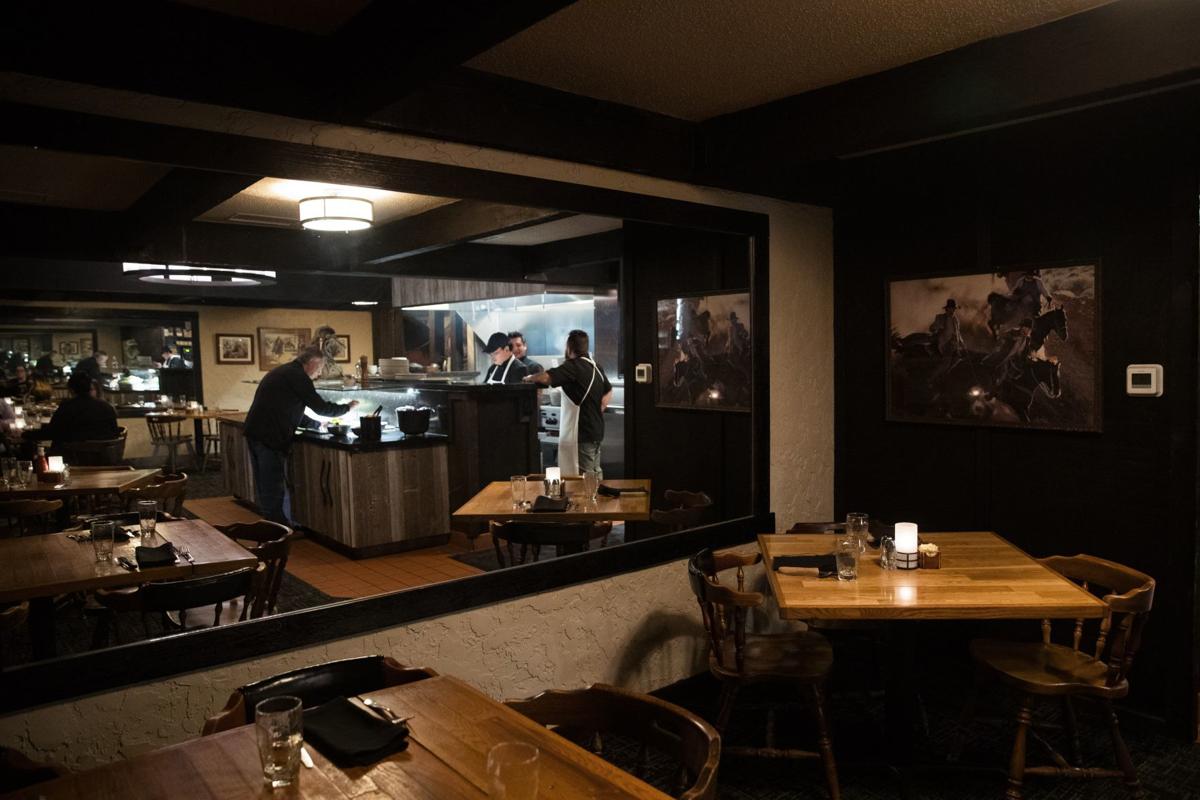 A customer and the salad bar at The Drover are reflected in a newly installed mirror at the restaurant. 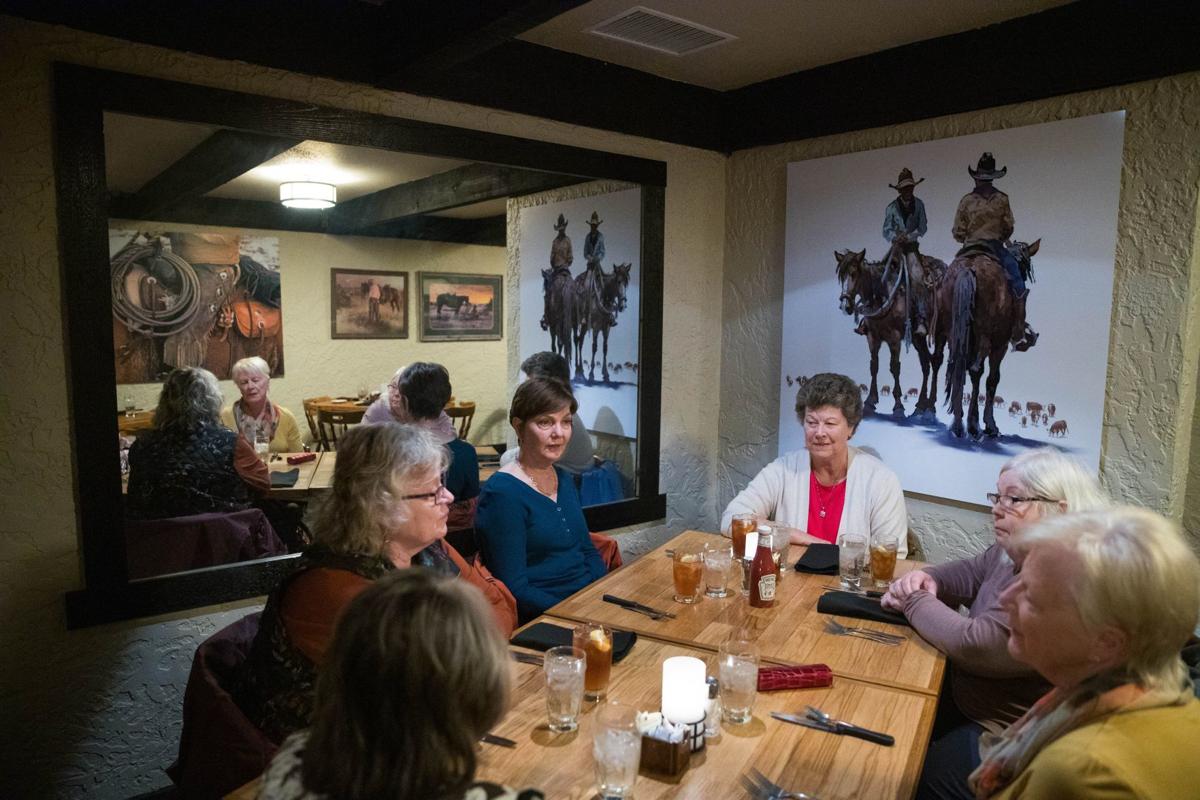 From left: Ellen Carlson, Rhonda Nicklin, Cindi Hearn, Diane Zimmermann, Nancy Peters and Cherie Cardaronella talk after having had their order taken at The Drover. Some of the art work at The Drover has been replaced because of a December fire. 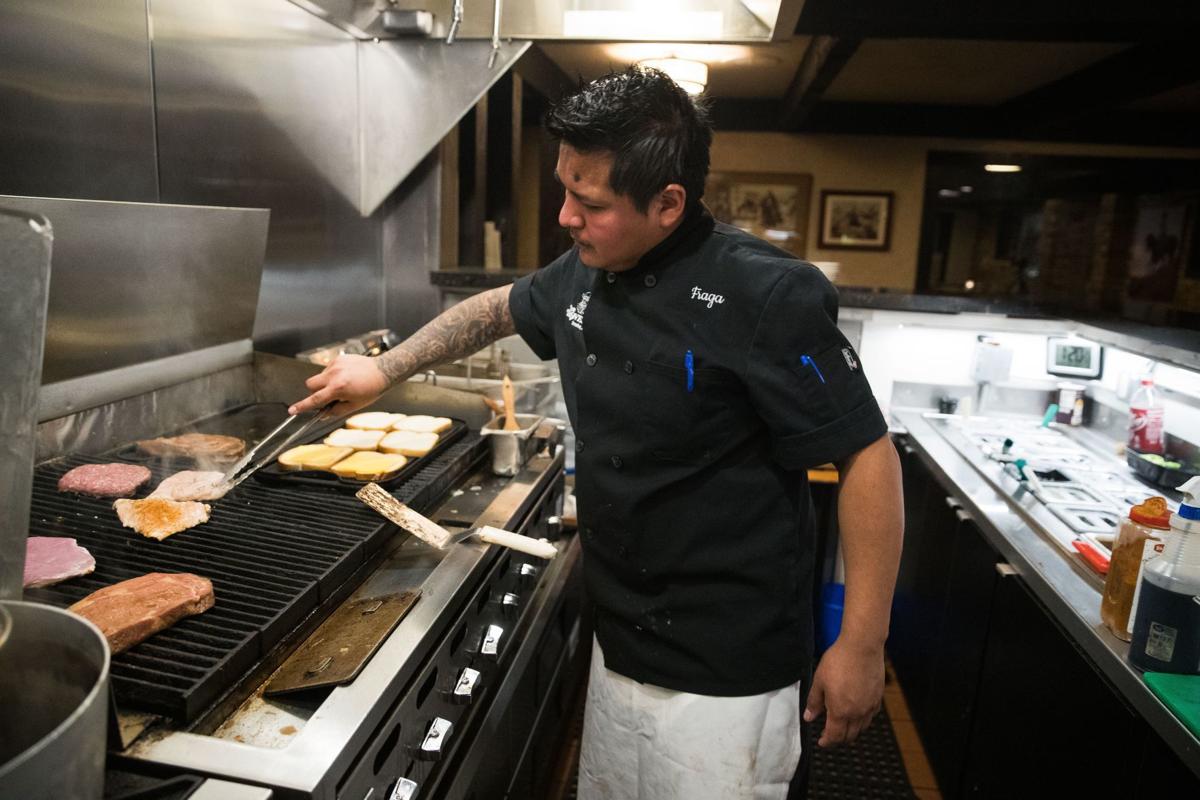 Chef David Fraga cooks up steaks, chicken, and burgers in the restaurant’s open kitchen. The kitchen was damaged in a December fire.

The familiar exterior of The Drover near South 72nd Street. Inside, some of the art and all of the lights are new since the fire, and some mirrors were added.

Most people find comfort when the things they love don’t change.

So fans of the Drover likely will be pleased and relieved when they visit the rebuilt version of their favorite independently owned Omaha steakhouse.

The interior still is cozily dim, decorated in shades of brown with Western art on the walls. The salad bar is the same, with crisp iceberg lettuce and a few carefully curated toppings. And the whiskey-marinated steaks still are among the best in town — if not the best outright.

In short, it’s the Drover you remember, with a few subtle updates made necessary after a fire in December 2018.

My husband and I went there on a recent Sunday evening, thinking it might be a good time to dodge the crowds. We were wrong. The restaurant — which reopened in early September — was jammed with patrons, even at about 7 p.m., and the host said it was a 30-minute wait.

No worries, we thought. We’ll sit in the front room, where several small round tables are set up so you can have a drink while you wait. But we didn’t wait long. The Drover staff appears to be adept at crowd management, and they found us a table after about five minutes.

The menu has other items besides beef, but we knew we wanted the whiskey steak. It had been several years since we’d had one. The spouse ordered the ribeye, while I had a sirloin. Both were cooked to a perfect medium.

We learned that the marinade flavored each steak a little differently. It wasn’t as prevalent on the sirloin, which was pretty lean. The ribeye, however, had more marbling, and the marinade really soaked into the fat, making the flavor more robust. I liked both steaks, but the ribeye really stood out. And both steaks were exactly like they were before the fire.

The salad bar has the standard steakhouse toppings for your basic (albeit very fresh) lettuce: cherry tomatoes, green peppers, black olives, shredded carrots and cheese, onions, pickled beets, croutons, sunflower seeds and bacon bits . Dressings are house-made for the most part, and the poppyseed and French both were great.

I’m a big fan of extensive salad bars with several different types of greens and other salads — including pasta — fruit, nuts, more exotic veggies and several kinds of cheese. (In other words, something of a smörgåsbord.) So I wouldn’t have been disappointed if The Drover had expanded it post-fire, though I was totally satisfied with what I had.

And there’s something to be said about a big pile of black olives topping your greens. Just ask my husband.

Co-manager Spike Sabin said every item on the salad bar has been there since day one, with veggies cut fresh every day. It’s simple by design, he said: Customers have come to expect it that way.

Sides are the standard steakhouse offerings. Last year, the restaurant added a twist, offering larger portions of lobster mac and cheese or au gratin potatoes, enough for two or three people. I ordered the latter, and it had a very nice smoky flavor with a hint of jalapeño, a super accompaniment to the steak. Roasted asparagus had that same smoky thing going, and it too was tasty.

I also have to mention the round loaf of fresh wheat bread that comes with dinners. It’s right out of the oven, and it too is how it was pre-fire: crusty on the outside, tender on the inside. If you treat yourself to the real butter it comes with, you won’t be able to stop at one slice. (I blew my allotment of carbs at one sitting.)

I went back for lunch by myself a few days later, when the special was a whiskey-marinated prime rib. It was flavorful and, unlike many slabs of prime rib, true to the medium I ordered instead of too pink.

The marinade sets it apart from other prime rib because it doesn’t have any au jus, which makes it more like a standard steak. That wasn’t what I expected (the juice is part of the reason why I love that cut of meat), but the extra flavor was compensation.

Sabin said customers can get the whiskey prime rib anytime just by asking, even though it’s not on the menu.

Sabin also detailed the minor changes that took place as they rebuilt.

Some of the art and all of the lights are new. They also redid the back of the bar, which is in a separate room off the main dining areas, using black marble. They also added a few mirrors throughout to make the restaurant look bigger.

That’s about the extent of the changes, he said.

They kept customers — especially their many regulars — in mind during construction.

“People would stop by during the building process and say, ‘Just don’t change things too much,’ ” he said.

“We’ve had lots of customer comments that everything is updated, but it looks similar to the old school we’ve always had here,” he said.

He credits co-manager Buddy Goodman, a 45-year employee who’s now fighting some serious health problems, with maintaining the restaurant’s quality. It wouldn’t be what it is now without him, Sabin said.

If you haven’t been to the Drover since the fire, you should go back, especially if you’re looking for a little reassurance. You’ll find familiar faces and spaces, and an establishment that couldn’t be more comfortable. Unless, perhaps, you could wear your jammies to dinner.

Try this: A whiskey-marinated prime rib that's available anytime if you ask, though it's not on the menu; au gratin potato casserole

Prices: Typical steak prices. The most expensive steaks are in the $45 vicinity; others are cheaper and other entrees are less expensive than that.

Halsey in no rush to make another album

Halsey in no rush to make another album

'Just like a small town': Richie's, a neighborhood go-to restaurant, plans to close

The diner known for owner Richie Huntzinger's mom's chicken recipe plans to close at the end of the year. The building, a converted laundromat, needs a major remodeling and could be razed as part of a plan to eventually redevelop a strip of Center Street into a walkable entertainment and retail district.

Have you tried the new veggie Runzas? We did

13 popular potato chip brands: Our top and bottom picks might just surprise you

Chips can go highbrow (perfect with caviar) and lowbrow (equally great with onion dip out of the jar). A panel of tasters rated the chips on their texture (too crumbly? too crunchy?), salt balance (too much? not enough?) and overall taste, with a maximum possible score of 20.

The new spot has 48 beer taps and 30 large-screen televisions.

Developmentally disabled actors get a chance to work with Omaha theater professionals.

At Porky Butts, the meat is the star. The restaurant has an impressive display of trophies, ribbons and other prizes from barbecue competitions. You order at the counter to dine in or carry out, aided by a staff that’s unusually attentive and congenial for a fast-casual eatery.

The Whiskey Filet is served with asparagus, toast and the au gratin potato casserole.

The salad bar at The Drover was damaged in a December fire. It was redone, but what it offers is the still the same.

A customer and the salad bar at The Drover are reflected in a newly installed mirror at the restaurant.

From left: Ellen Carlson, Rhonda Nicklin, Cindi Hearn, Diane Zimmermann, Nancy Peters and Cherie Cardaronella talk after having had their order taken at The Drover. Some of the art work at The Drover has been replaced because of a December fire.

Chef David Fraga cooks up steaks, chicken, and burgers in the restaurant’s open kitchen. The kitchen was damaged in a December fire.

The familiar exterior of The Drover near South 72nd Street. Inside, some of the art and all of the lights are new since the fire, and some mirrors were added.