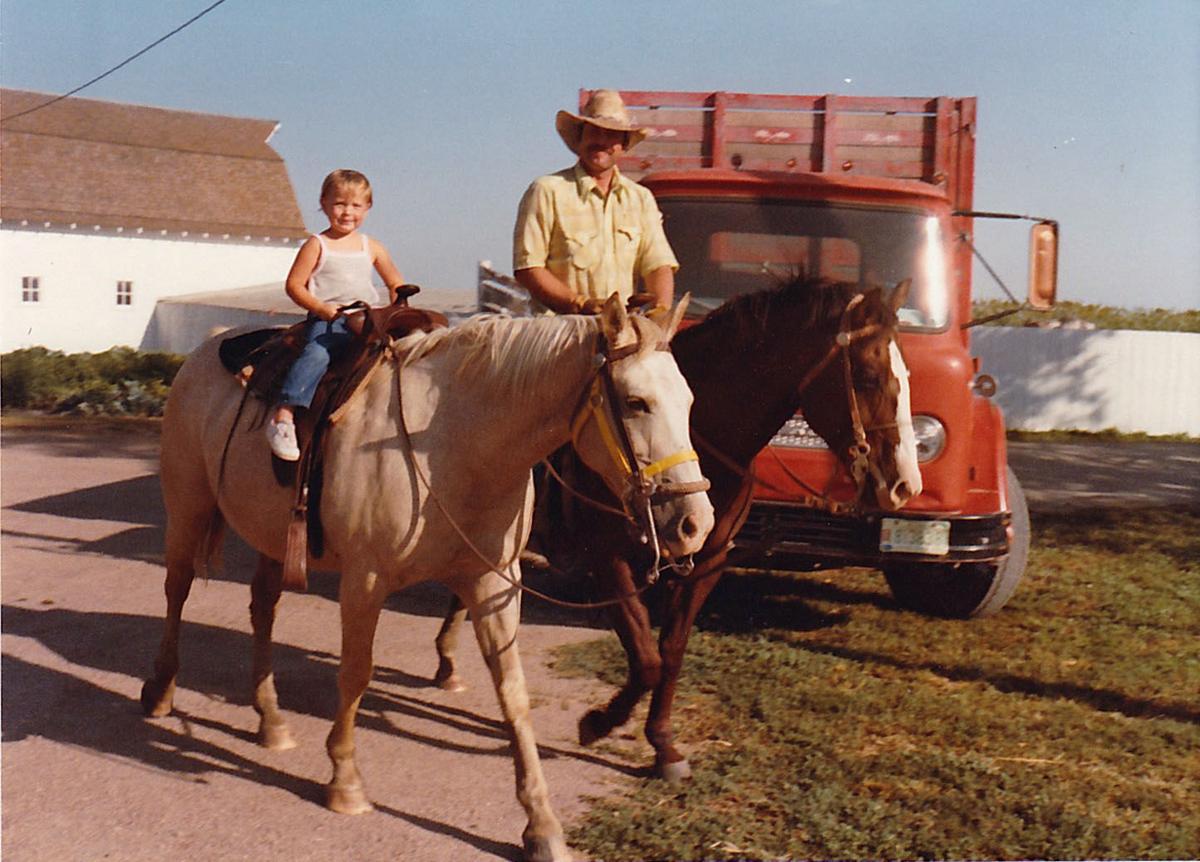 A young Jess Benjamin with her father, Howdy Benjamin, on the family's ranch near Cozad, Nebraska. 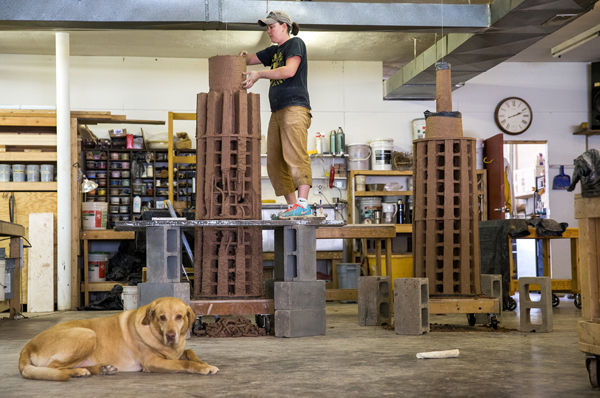 Jess Benjamin works on two of her sculptures made of clay, towers patterned after those at Hoover Dam, inside her Omaha studio.

For a rancher’s kid, it was a bad omen.

Jess Benjamin had stepped outside to get some fresh air, to escape for a moment the nagging feeling that graduate school wasn’t working out, that her sculptures, though technically good, lacked focus, lacked a voice, didn’t really stand for anything.

Benjamin’s head was already filled with these doubts and with thoughts of her father in Cozad, Nebraska, where another dry season was taking its toll on the family ranch, when she saw it.

Back home, this would have been a bad symbol — a sign of drought and infestation and precious grass being stolen from the mouths of even more precious cattle. All her life, Benjamin had been conditioned to see a grasshopper as an enemy.

This time, she saw an answer.

She realized the story she needed to tell was the one closest to home. She started making art about water — about drought, about rights, about usage and consumption and about the short-term solutions engineered to stem long-term catastrophes. And in the process, Benjamin forged a most unlikely artistic partnership, listening — perhaps for the first time in her life, truly listening — to the things her father told her.

Starting today, her latest work — a pair of sculptures 7 feet tall inspired by the inlet towers at Hoover Dam — can be found on display at the Joslyn Art Museum as part of a new exhibition called “Art Seen.” The show features works by 37 artists from Omaha and Lincoln. Some are established names with regional, national and even international reputations. Others are emerging artists showing extraordinary talent out of the gate.

Benjamin, 36, exists somewhere in between — a working artist seven years out of grad school and hustling for the breaks that could make her career. She splits her time between Creighton University’s Lied Art Gallery, which she directs, and a 4,300-square-foot building in Benson she renovated into a studio and gallery for her large-scale works.

Early on, Benjamin became fascinated by the form of the massive tetrahedrons (or “jackstones”) used to prevent erosion on Kingsley Dam near Ogallala, and the way time and the elements had peeled away the concrete to expose the rebar within. She started making her own ceramic jackstones, and her own clay rebar, creating a series of sculptures and installations of items that are both playful and yet never meant to be seen, their appearance above water signaling a depletion that isn’t good.

Benjamin also makes climatological pieces — including three-dimensional, color-coded maps using data pulled from the U.S. Drought Monitor. It’s one of a few key resources she follows closely while making her art. She also listens to rural radio station KRVN in her pickup, staying up-to-date on agricultural reports and conditions.

But her greatest resource is the one she’s listened to her whole life. He’s back home on the ranch, tending to more than 6,000 acres of pasture and another 2,500 acres of farmland. Howard “Howdy” Benjamin, 65, is acutely aware of the conditions in the western half of Nebraska, and in his voice she can hear the level of concern that exists during any given week.

“He’s always optimistic,” Benjamin said, “even when it hasn’t rained, or the winter was pretty hard because they didn’t get a lot of snow.”

But she can tell. There was the conversation back in grad school, the night of the grasshopper, when she heard her father say they were pulling cattle out of the hills.

“Which he’d never done,” she said.

She felt his concern, even if he didn’t let on, and the concern fueled her art. It became a connection, calling attention to the dry reality of rural Nebraska.

A place Benjamin once wanted to escape.

“I could ride a horse before I could walk,” she said of her upbringing. “I had my first shovel at age 5.”

Growing up on the ranch meant a never-ending list of chores. Irrigating in the morning. Spraying for thistles in the afternoon. She hated it, of course. Took up sports almost as a way to avoid it.

But now, nearly two decades removed from it, and a new parent, she looks back on it differently. She sees what she didn’t fully appreciate at the time.

She sees how hard her dad worked, and the smart decisions he made, and the way he weathered tough times and survived when other ranches and farms went belly up.

She remembers him coming in for dinner and heading back out to work until 8 or 9 p.m., or sometimes 11 p.m., and she thinks about how she didn’t really start listening to him until she was in her late twenties.

Now she looks west and sees a man on the front lines of what her art is about. She calls him a silverback, a gorilla in its prime.

“Hard to work for,” she said, “but pretty freaking cool.”

Meanwhile, some 200 miles away, Howdy Benjamin looks east. He sees the shifty kid he raised, the one always up to something, the one with good eyes, who could spot a buck before anyone else. In hindsight, the art thing makes sense. She was always doodling, always carving into or scribbling over something she shouldn’t be.

He looks east and sees as good a steward of the land as there might be in the state. He sees her calling attention to a crisis of local, national and global significance. And he wonders where their conversations, and her art, will go.

“(Maybe) she and I will have another horse to ride in a few years,” he said.

During the summer months, Benjamin visits her parents as much as possible. They’ll meet at the family cabin near Johnson Lake, about 30 miles southwest of Cozad.

She likes to go fishing with her dad. As much as she’s taken from their talking, it’s those moments, the silence, that she really loves. A father and a daughter, rancher and artist, sitting together in quiet company.

“He’s probably my favorite person to not talk to,” Benjamin said. “We could spend hours not talking.”

What: a juried exhibition of artists from Omaha to Lincoln

When: today through Oct. 11

Admission: $10 general public; free for members, college students and youths age 17 and under

Nothing says summer like a trip to the drive-in theater or a watching a movie in the park. Check out the best the Omaha metro has to offer.

Check out photos from celebrity weddings in the 1950s and '60s

Wedding gowns like those worn by Grace Kelly and Jacqueline Bouvier were endlessly copied, as were the choices of pearl chokers, veils, and flowers in the bouquets of countless others.

Queen beams as she returns to Ascot after COVID-19 hiatus

LONDON (AP) — Queen Elizabeth II was smiling broadly as she attended the final day of the Ascot races on Saturday, where environmental protesters urged the monarch to press politicians to act faster against climate change.

Beyond 'In the Heights,' colorism persists in Hollywood and is rarely addressed

Every year, Hollywood faces criticism for its lack of racial diversity. But another pervasive problem also resurfaces: the lack of diversity in skin tone.

A young Jess Benjamin with her father, Howdy Benjamin, on the family's ranch near Cozad, Nebraska.

Jess Benjamin works on two of her sculptures made of clay, towers patterned after those at Hoover Dam, inside her Omaha studio. 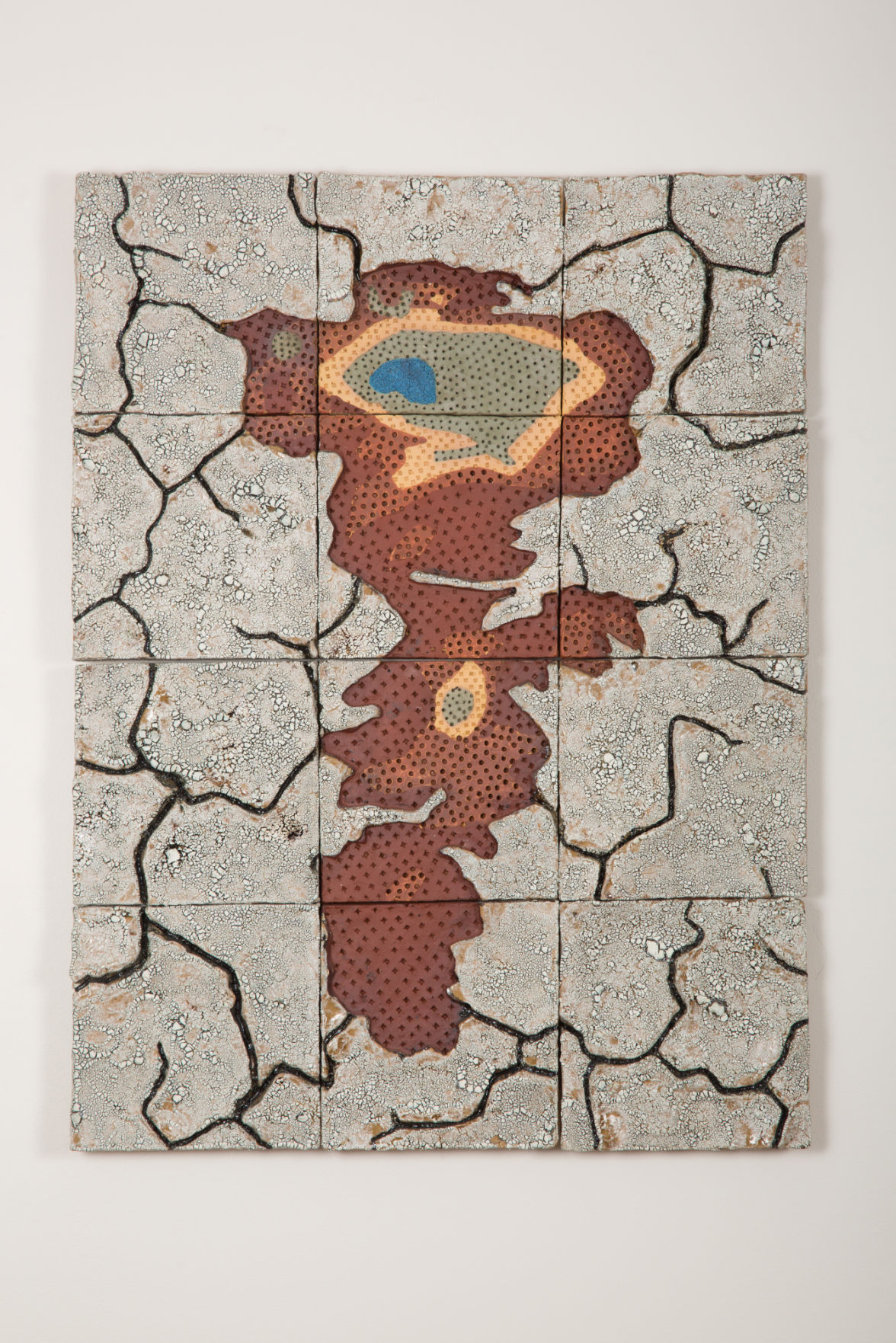 Jess Benjamin's "Dried Up on the Ogallala Aquifer" 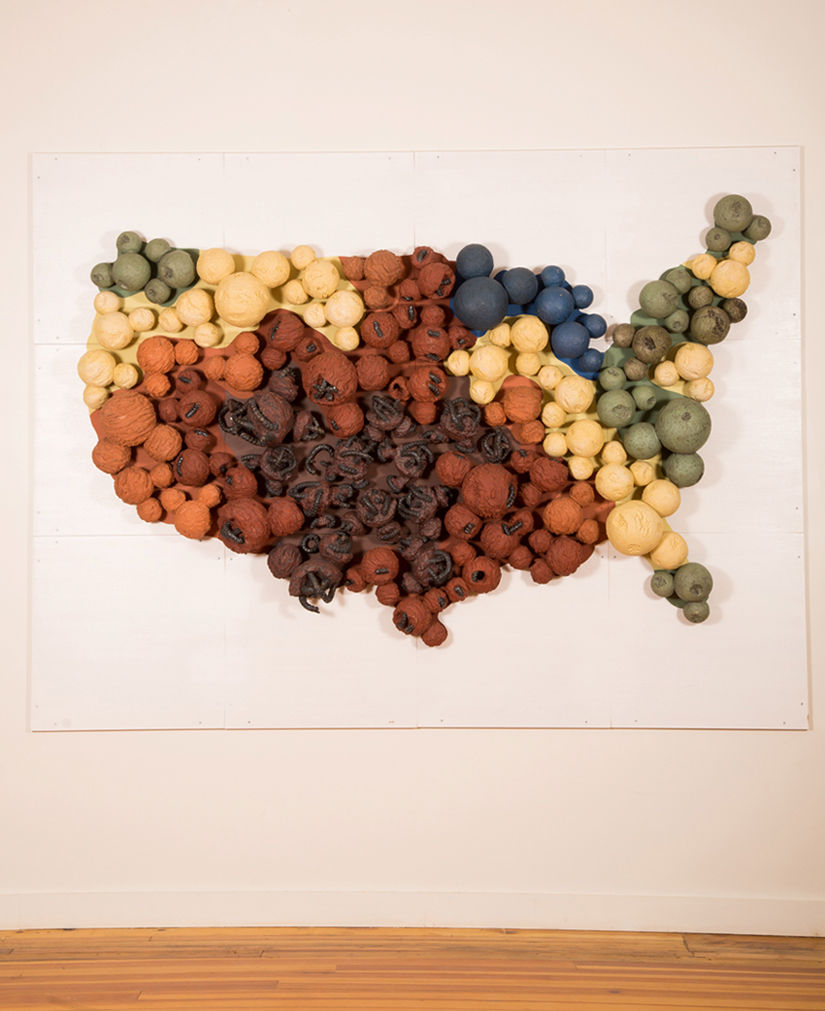 Jess Benjamin's "The Future of Drought?"