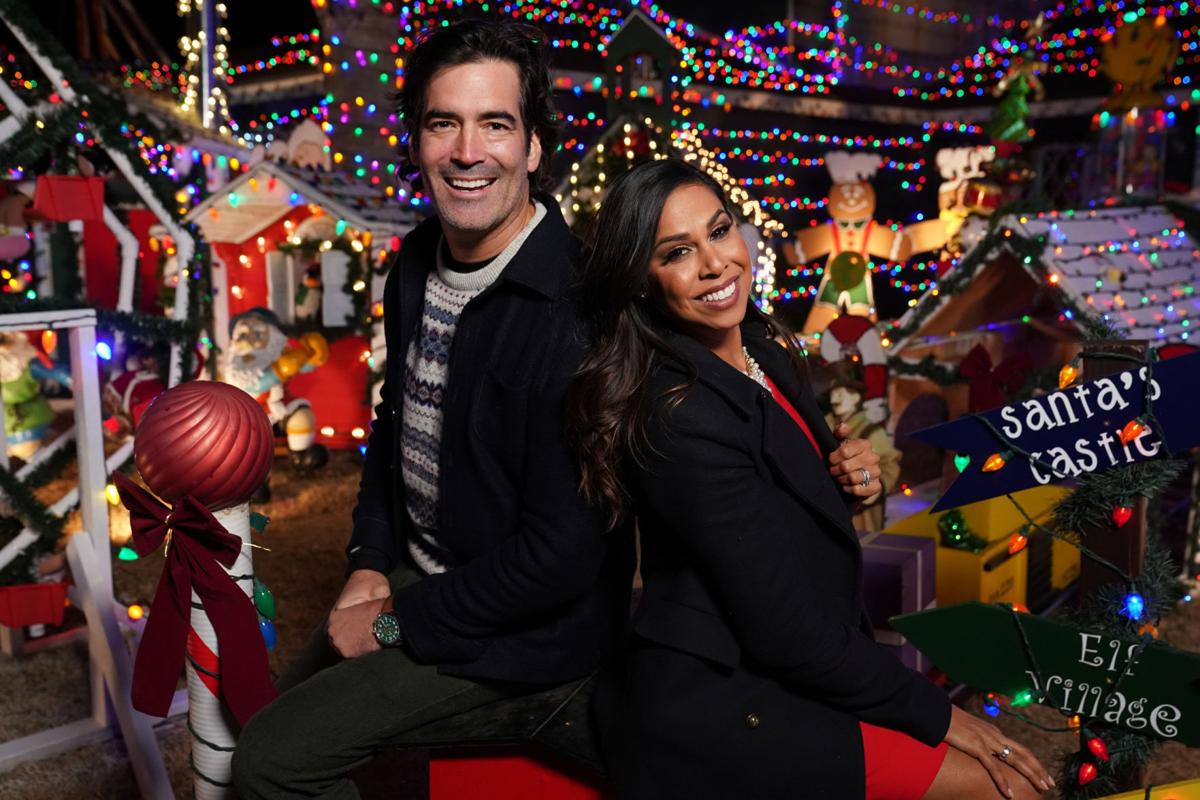 Carter Oosterhouse and Taniya Nayak get a front row seat to all the great homes decorated across the country in "The Great Christmas Light Fight." 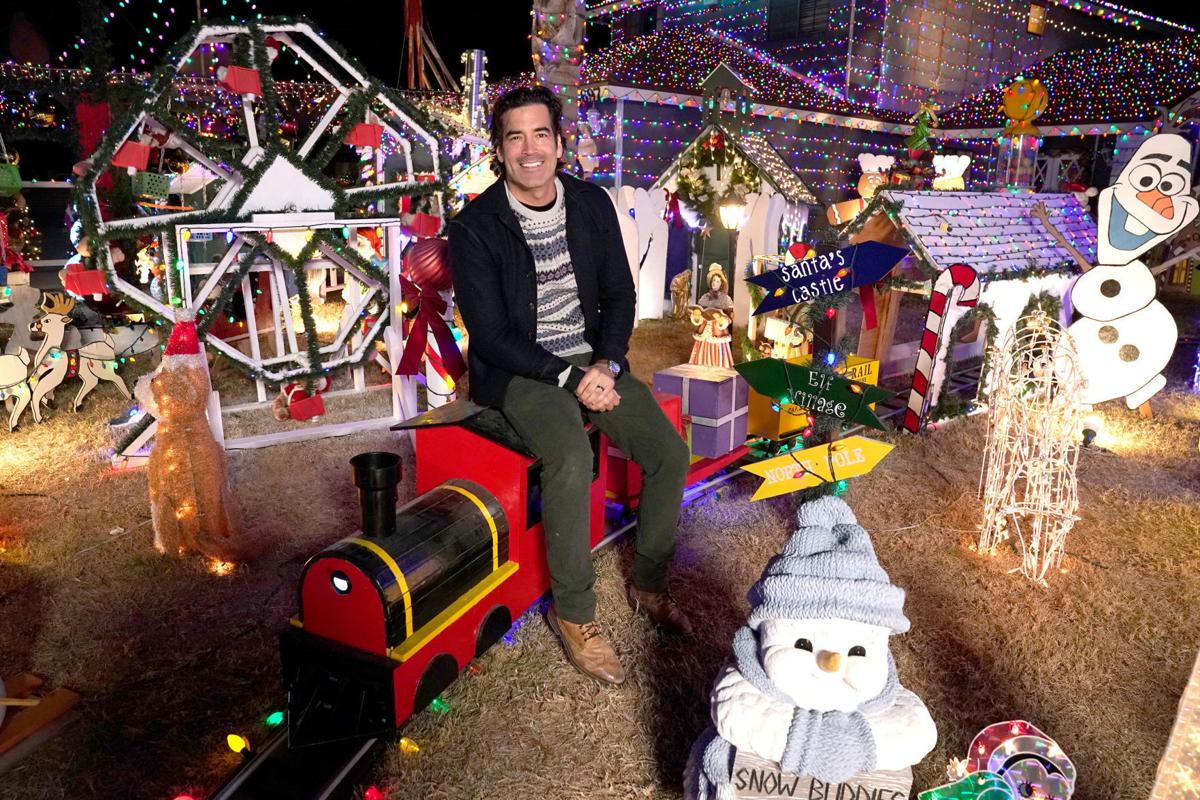 Carter Oosterhouse likes to get in the thick of the decorating in the "Great Christmas Light Fight." The winner gets $50,000 and a Christmas-bulb shaped trophy. 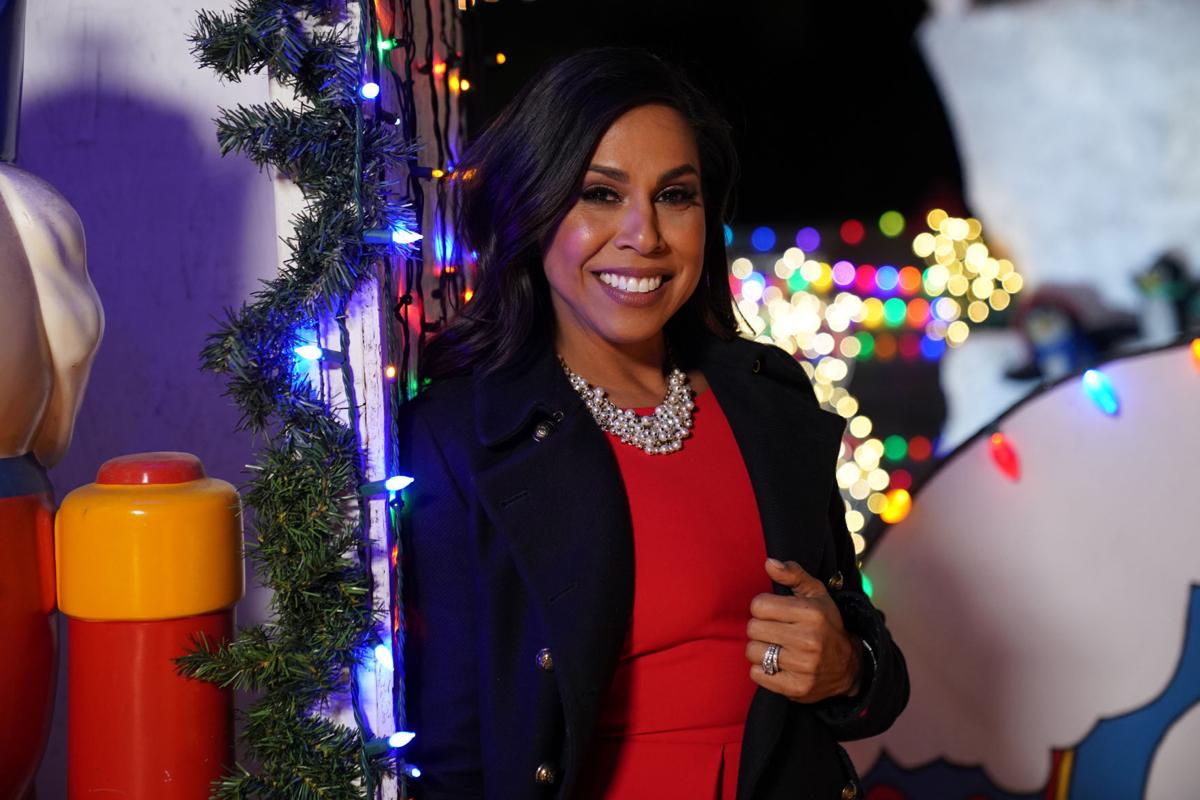 Taniya Nayak uses her design expertise to judge the homes in the "Great Christmas Light Fight." 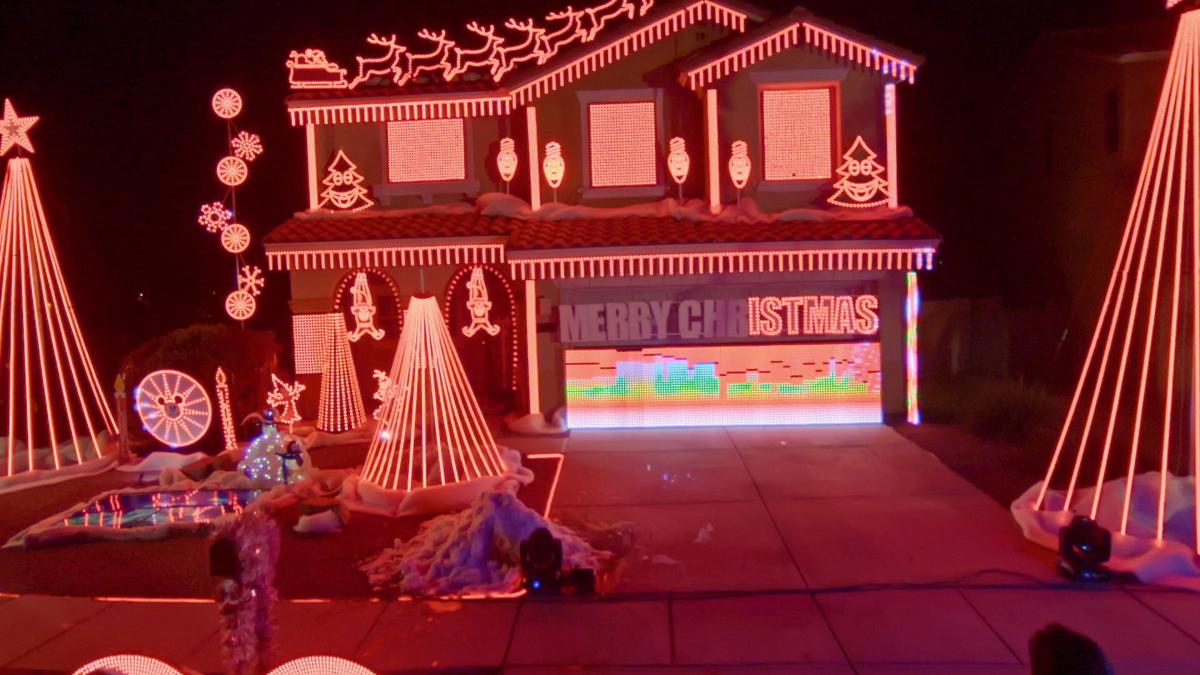 One color for all the lights? It's a possibility.

When contestants discover they’ve won “The Great Christmas Light Fight,” they’re not pining to see that “bag of money,” as host Carter Oosterhouse puts it. “They want the trophy.”

“They want to touch the trophy, hold the trophy, see if there’s weight to it,” he says. “And usually the consensus is, ‘Wow, this is pretty well built.’”

That trophy – which indicates its owner had an eye-popping light display – has been a holiday tradition since 2013. Airing over the Christmas season (the 2021 edition premieres Sunday on ABC), it showcases the latest innovations in exterior decorating.

“Nine or 10 years ago, it was all about lots of lights – millions of lights,” Oosterhouse says. “Now, it seems like it’s about the design and the story telling.”

Bigger is better? Not necessarily, says Taniya Nayak, the show’s other host. “On one of the episodes (this year), you’ll see a very small property and simple display. But every single thing has purpose. The cleanliness and meticulousness spoke to me. These guys really put a lot of effort in. It wasn’t a big property, but they did it really well.”

Key to all of the displays: Storytelling.

“The things you have to have to win are passion and a story that connects to the display,” Nayak says. “I’m a designer and once you can connect any space to anything personal, it’s a win. You’ve reeled those people right in and you want to see more.”

Although some homeowners have boggled viewers’ minds with technical achievements, it isn’t necessary, says Oosterhouse. “Those aren’t always the ones that win. But, done the right way, it can be pretty compelling to see.”

Gene Watchorn and Julie McDowell of Ponca, Nebraska, won the 2018 award for their work in 2017. Because it’d be too difficult to judge homes before Christmas each year, the “Light Fight” is decided a year in advance. So, this year, Oosterhouse and Nayak are judging homes for the 2022 show.

Last year's contestants were decorating in the “thick of the pandemic,” Oosterhouse says, “and it really changed for me the way I saw the show. I was connecting more with the homeowners and the reason why they do what they do – it’s for their community, for their neighborhood. It doesn’t feel like there’s a selfish bone in any of them. Even though it’s a competition show, they’re doing it because they want to put smiles on their neighbors’ faces. It’s even more needed right now.”

So, if the two are able to judge others’ homes, does that mean they’re experts? Hardly. While Oosterhouse has hung lights at his house, he’s not in league with the “Light Fight” competition. And Nayak? “I live in a condo,” she says.

Then, too, both are gone during much of the holiday season, so interior decorating becomes a challenge. Nayak puts up two trees – one in that condo and a small one in Fort Lauderdale, “my home away from home.”

“One of the big trends is rainbow colors and I’d like to do an ombre rainbow tree,” she says. “Carter thinks it’s ridiculous.”

More traditional, Oosterhouse is encouraged by the way contestants “make stuff out of nothing. Like they’ve taken a lawnmower engine and a vacuum and a fan and just figured out how to make some really cool stuff. Now, some of the pastels we’re seeing is mind-blowing.”

Cooperation is another key element. Because exterior lighting has become such a big thing, decorators have found ways to help one another out through conventions, chat rooms and online websites.

And the hosts? They’re in this business because they’re Do-It-Yourself junkies, Nayak says. “It’s a natural fit.”

Adds Oosterhouse: “We’re like big kids. When you get to play around with some of these designs, it immediately brings you back. Who would ever dream up a job like this? We’re just lucky.”

Betty White's assistant shares one of her final photos

"She was radiant and beautiful and as happy as ever," the post read. See how Betty White was celebrated on what would have been her 100th birthday.

Fictional hospitals make for great television. However, what happens every week on medical dramas is often not what happens in real life.

A follow-up to “How I Met Your Mother” might have happened a lot sooner. “This Is Us” just got in the way.

The actors in the new medical drama, “Good Sam,” have gotten so into their work they’re swapping surgical videos they find on the internet.

Gorat's server tips the odds on Leno's 'You Bet Your Life'

Showtime brings back "Ray Donovan" for a movie-length finale to bring closure to the dark drama. Denzel Washington and Frances McDormand headline "The Tragedy of Macbeth," generating Oscar buzz.

Writer/producer Phil Augusta Jackson didn’t have to go far for inspiration for his latest series, “Grand Crew.” He found it in a wine bar.

Rebecca Sonnenshine answers our burning questions and reveals what she hopes to explore in Season 2.

‘Scream: The True Story’: Inside the Horrific Findings of the Documentary

Paranormal investigator Steve Shippy and psychic medium Cindy Kaz explore the horrific history of 'The Gainesville Ripper' like never before.

How does a writer/director address social issues in a superhero series? Through normalization, Ava DuVernay says.

Carter Oosterhouse and Taniya Nayak get a front row seat to all the great homes decorated across the country in "The Great Christmas Light Fight."

Carter Oosterhouse likes to get in the thick of the decorating in the "Great Christmas Light Fight." The winner gets $50,000 and a Christmas-bulb shaped trophy.

Taniya Nayak uses her design expertise to judge the homes in the "Great Christmas Light Fight."

One color for all the lights? It's a possibility.