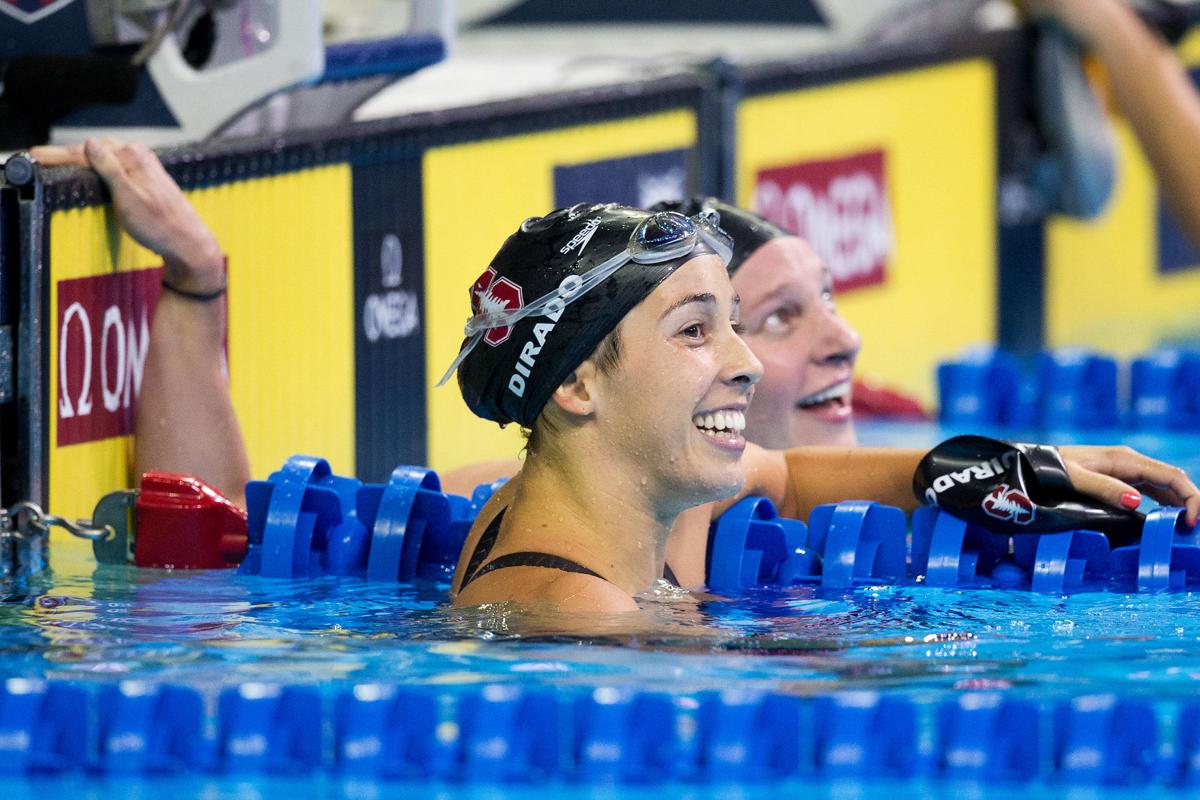 Maya DiRado, left, and Melanie Margalis smile after competing in the finals of the 200 meter individual medley in Omaha in 2016. DiRado placed first and Margalis, second. 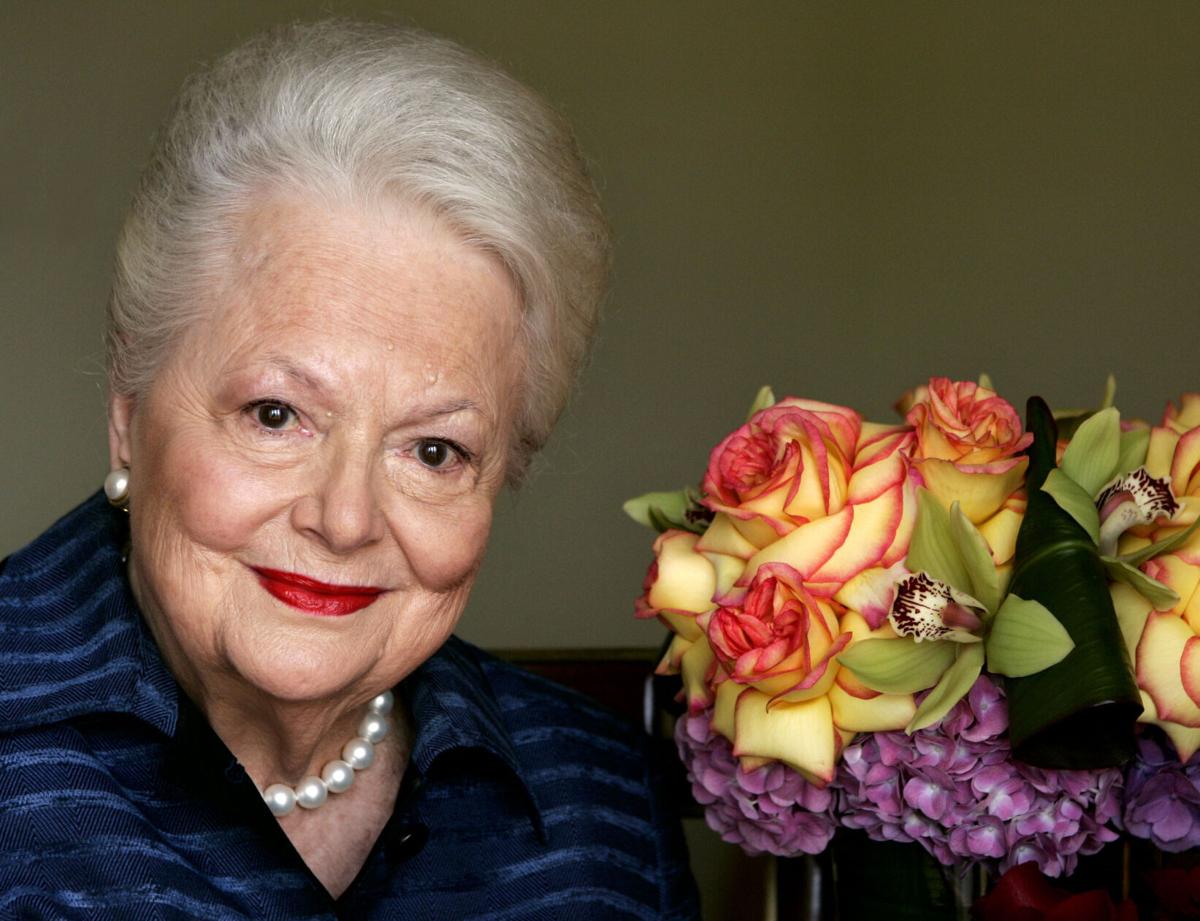 Olivia de Havilland, the doe-eyed actress beloved to millions as the sainted Melanie Wilkes of “Gone With the Wind,” died July 26, 2020, at her home in Paris. She was 104. Her character catapulted the popularity of “Melanie” for baby girls born in 1938.

The U.S. Olympic Swim Trials are taking place in Omaha this month. Twenty-nine-year-old Melanie Margalis, holder of the U.S. record in the 400-meter individual medley, is expected to win that event here. At the 2016 Olympics, she won gold as part of the U.S. women’s 4x200-meter freestyle relay.

Mélanie is the French form of Melania, a Latin name derived from Greek “melaina,” meaning “black.” Melania the Elder (c. 350-417) and granddaughter Melania the Younger (c. 383-439) were fabulously wealthy Roman women who used their fortune to build convents and give relief to the poor. St. Jerome, angry at the elder Melania for supporting his theological rival Origen, called her “black in name and black in nature.” That didn’t stop both Melanias being revered as saints.

Though the Normans brought the name Melanie with them to England in 1066, it was rare and soon died out. In the 1850 United States census, 144 of the 189 Melanies were born in French-settled Louisiana, France, or Belgium.

Melanie’s rare American use before 1940 was usually in a Roman Catholic context. For example, when Martha Anne Holliday (1850-1939) joined the Sisters of Mercy in Atlanta in 1883, she was renamed “Mary Melania,” and called “Sister Melanie.”

In real Civil War Georgia, Melanie was almost as unusual a name as Scarlett. The 1860 census found only one Melanie in the entire state.

The spectacular success of “Gone With the Wind” pushed Melanie into the top thousand names in 1938 for the first time. After the film with Olivia de Havilland playing Melanie premiered in December 1939, the name soared 250% in 1940 and kept on rising.

In 1969, Melanie ranked 92nd. That year singer Melanie appeared at the famous Woodstock festival. In 1970 she had huge hits with “Look What They’ve Done to My Song, Ma” and “Lay Down (Candles in the Rain),” followed by “Brand New Key” in 1971.

Though today she goes by Melanie Safka, back then the singer was billed as Melanie, anticipating future one-name stars like Cher and Madonna. The name Melanie jumped 45% to peak at 42nd in 1972.

Melanie’s fall after that peak was slowed for a few years when Melanie Griffith (born 1957) earned an Oscar nomination for “Working Girl” in 1988. It then had another comeback after 2001, becoming popular in Mexico and with Hispanic Americans, often in the spelling Melany. Melanie Smooter, Reese Witherspoon’s character in the 2002 hit “Sweet Home Alabama,” was also an influence. The name’s most recent peak was at 77th in 2012. In 2020 it ranked 104th.

Two other swimming Melanies besides Margalis have won Olympic gold: American Valerio (1969) at Atlanta in 1996 and Australian Schlanger (1986) at Beijing in 2008 and London in 2012. Margalis can hope that’s a good omen for her chances in Tokyo later this year.

The 2021 College World Series field is starting to come together. Here's a look at the teams that have punched their tickets to Omaha so far.

The Arkansas coach who took Nebraska to the College World Series twice in the early 2000s praised NU’s effort after Monday’s game. Certainly, he said, they didn't look like an ordinary No. 2 seed.

Maya DiRado, left, and Melanie Margalis smile after competing in the finals of the 200 meter individual medley in Omaha in 2016. DiRado placed first and Margalis, second.

Olivia de Havilland, the doe-eyed actress beloved to millions as the sainted Melanie Wilkes of “Gone With the Wind,” died July 26, 2020, at her home in Paris. She was 104. Her character catapulted the popularity of “Melanie” for baby girls born in 1938.