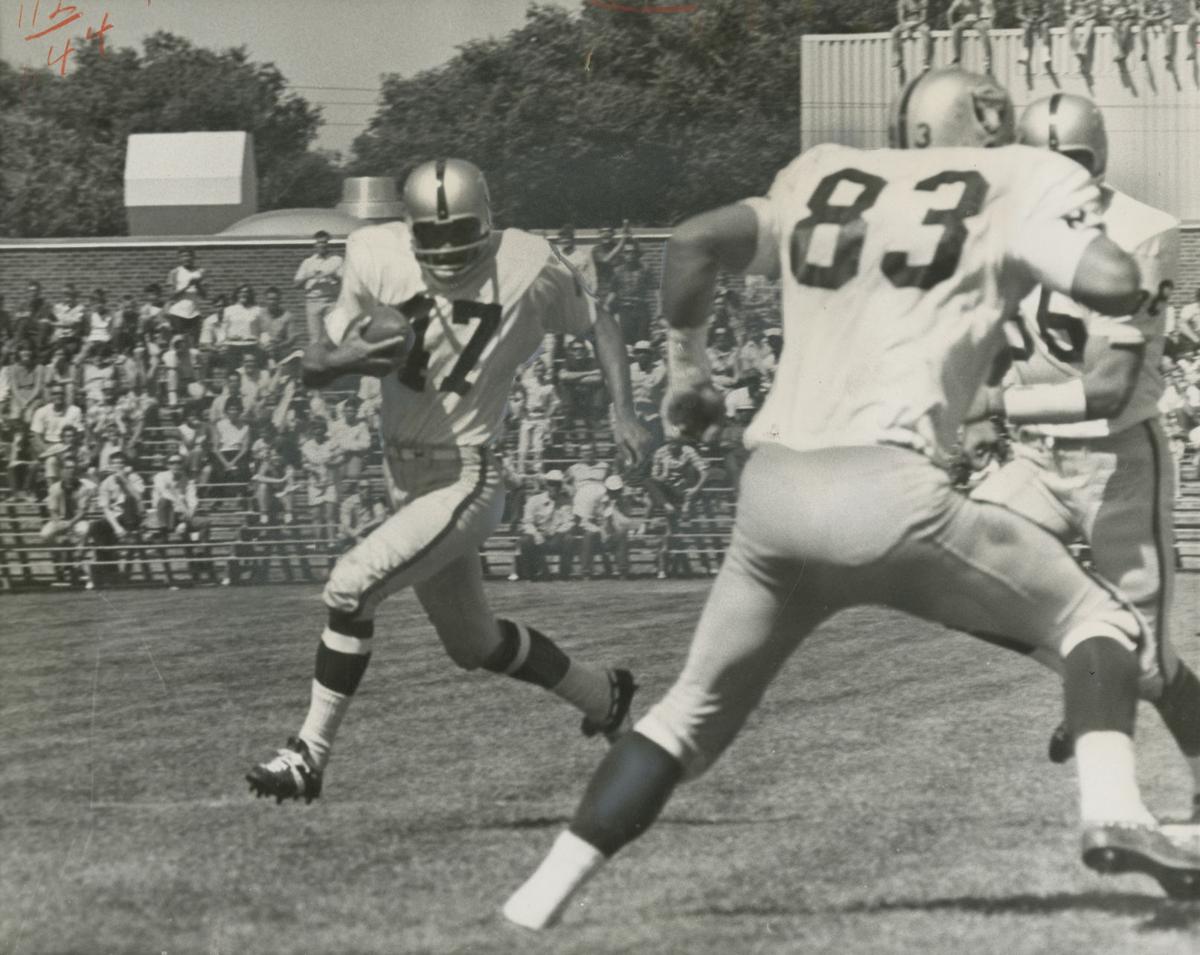 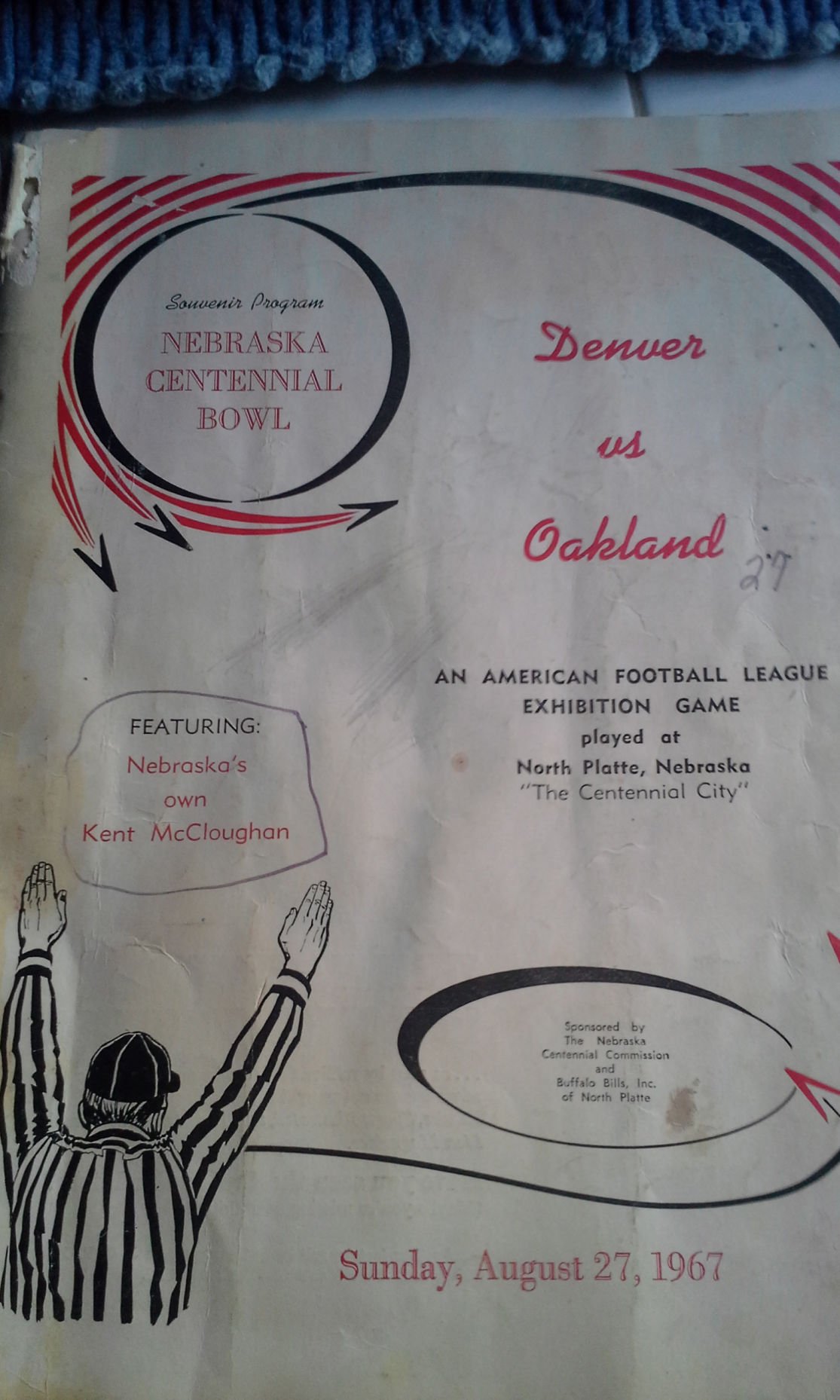 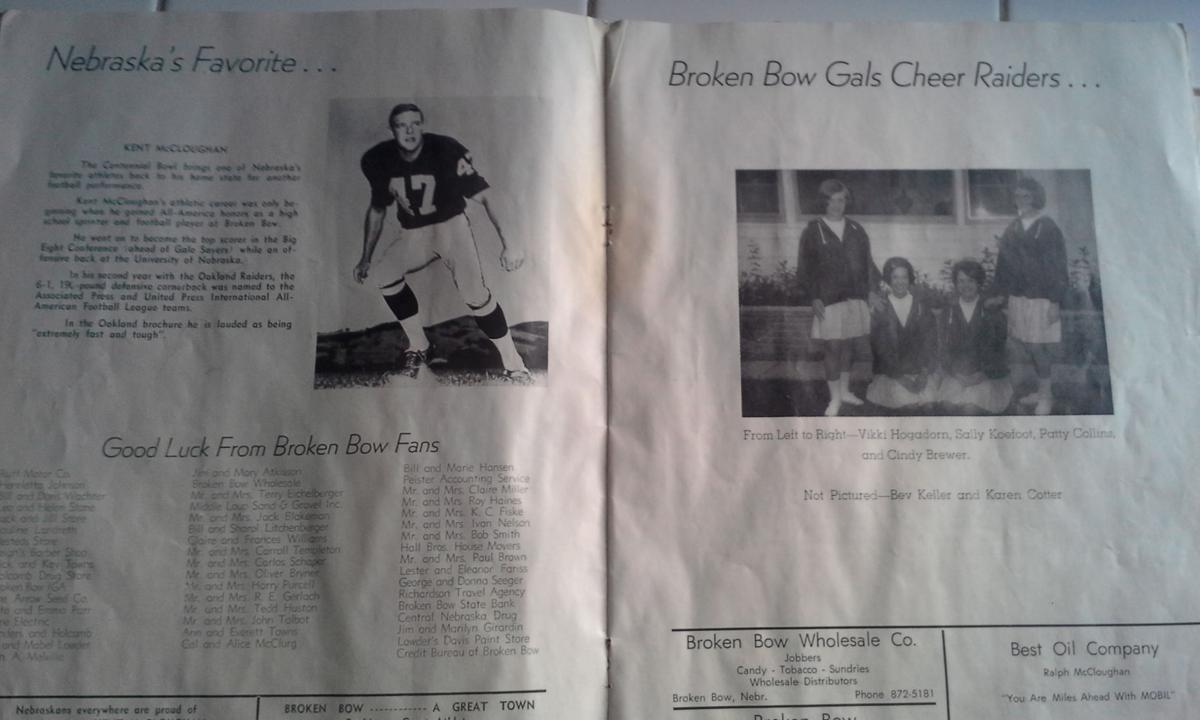 A Denver Broncos-Oakland Raiders game at North Platte High School would be laughably unlikely today, but it happened 50 years ago Sunday.

The preseason game is a vestige of a bygone era of professional football. Today those games are played in large stadiums on immaculate surfaces.

In 1967 the Raiders and Broncos were in the upstart American Football League, which sought fans wherever it could find them. Three years later the AFL merged with the National Football League, an enterprise that grew into a money-making machine.

Kent McCloughan, the Broken Bow, Nebraska, boy who played cornerback for the Raiders in the 1960s, recalls how odd it was.

“I can remember people saying ‘What the hell are we doing here?’ ” said McCloughan, now 74.

An ambitious North Platte group, the Buffalo Bills sports booster club, brought the Broncos and Raiders to town with a pledge of $25,000 per team. The club raised money from businesses and individuals to pay the teams.

“It’s very hard to believe, isn’t it?” said Butch Rasmussen, the longtime owner of North Platte’s Cedar Bowl bowling establishment. “You know, at the time, we didn’t appreciate it for what it would be,” said Rasmussen, who was in his late 20s when the game took place.

The organization called the game the Centennial Bowl because 1967 was Nebraska’s 100th year of statehood. The club brought in bleachers from other communities.

Mitch Gubser was a little boy when he met McCloughan in Broken Bow, where Gubser’s grandparents lived, a couple of years before the game. McCloughan already was a local hero for his exploits in multiple sports in Broken Bow, and meeting him was a treat for Mitch.

Gubser’s father took his son to the North Platte airport, where Mitch, 9 years old at the time, saw the Raiders fly into town.

He met some of the Raiders, including Warren Powers, who played safety. Like McCloughan, Powers had been a player for the University of Nebraska.

“Everybody was really cordial, and the town embraced the experience,” Gubser said. “All I know is it was quite the buzz in North Platte in 1967.”

Father and son went to the game at North Platte High School on Aug. 27, 1967. “As a 9-year-old, it was really, really exciting to see that,” Gubser said last week.

Having met two Raiders with Nebraska ties, the North Platte kid was hooked on the silver and black. And even though he now lives in Durango, Colorado, Gubser, 59, remains a fan of the Raiders.

Tickets cost $10.25 for reserved seats and $6 for general admission.

The organizers put tarps over the fences so people couldn’t watch the game for free, Gubser recalled.

McCloughan’s wife, Elnora, had known McCloughan since junior high school. That weekend she and their baby, David, stayed with her parents in Broken Bow. But she and David attended the game.

“I really didn’t know much about professional football,” she said. “I’ve never really gotten into it.” The McCloughans, who have been married for 52 years, now live in Loveland, Colorado.

“I remember very little as far as the specific items of the game,” said Rasmussen, who is 78 and retired. “I remember the weather was perfect.”

The Broncos were an inferior organization at the time and would take wins any way they could, including by playing starters longer in preseason games. Denver won 21-17.

McCloughan recalls that the Raiders were pleased that nobody had been injured. They were gearing up for regular season, which started the next week.

The Raiders flew home. Elnora McCloughan remembers that she and their baby were the only woman and child on the flight.

And the Centennial Bowl between the Broncos and the Raiders has receded in people’s memories as one funky moment in Nebraska sports history.

In a historic series, The World-Herald honors Nebraska's all-time greatest athletes. The Nebraska 100, originally selected in 2005 and then up…

From 1890 to today, check out a recap of every Husker football game ever played.

The story of Dynamite Pete: Hermit who lived near Platte River was 'one of the colorful characters of the country'

Dynamite Pete is a fading memory in and around Louisville, but his legend lives on in the yellowed newspapers and archives of the town library, and every so often in a fuzzy bar tale told by an old-timer. 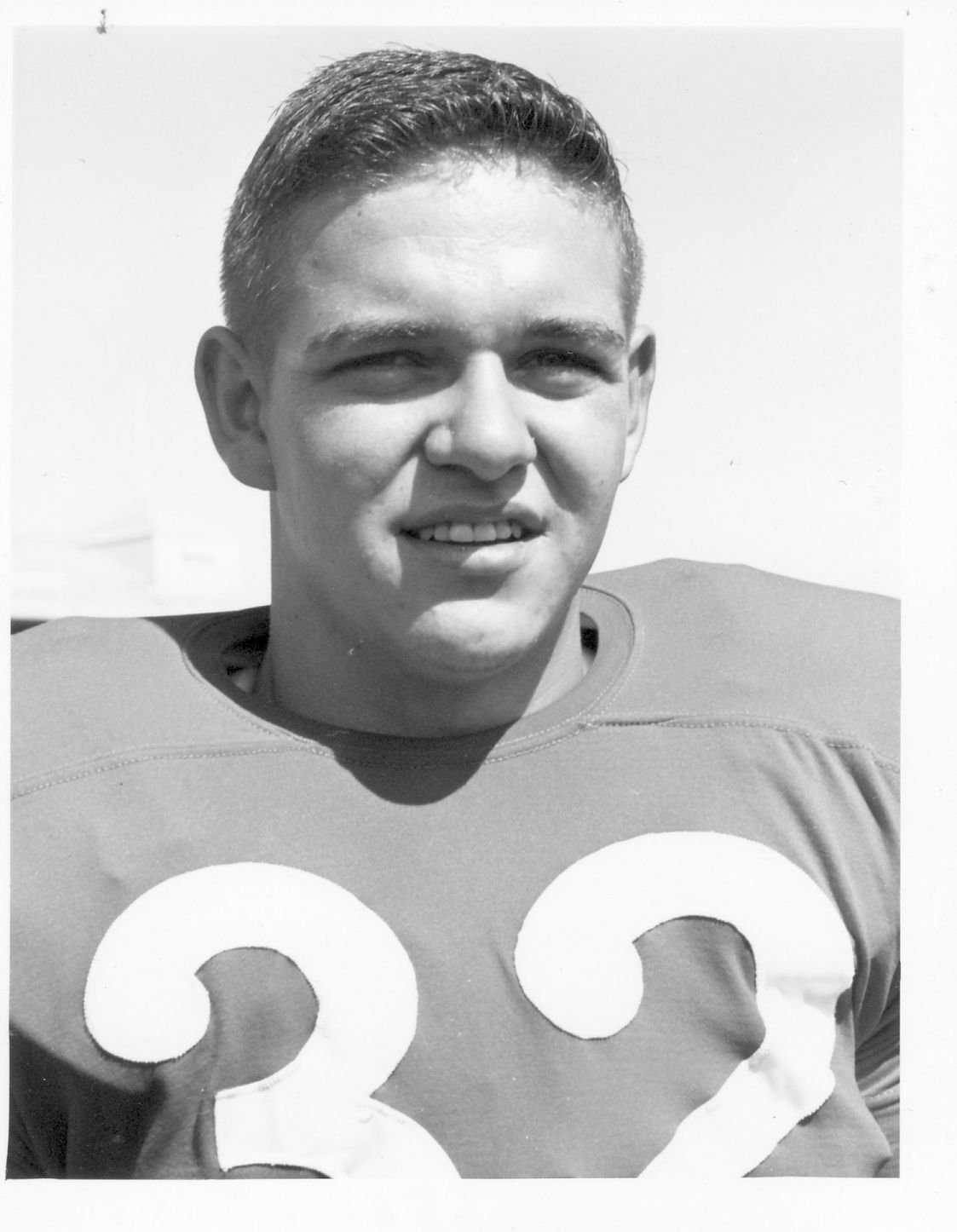 Kent McCloughan during his years playing for Nebraska 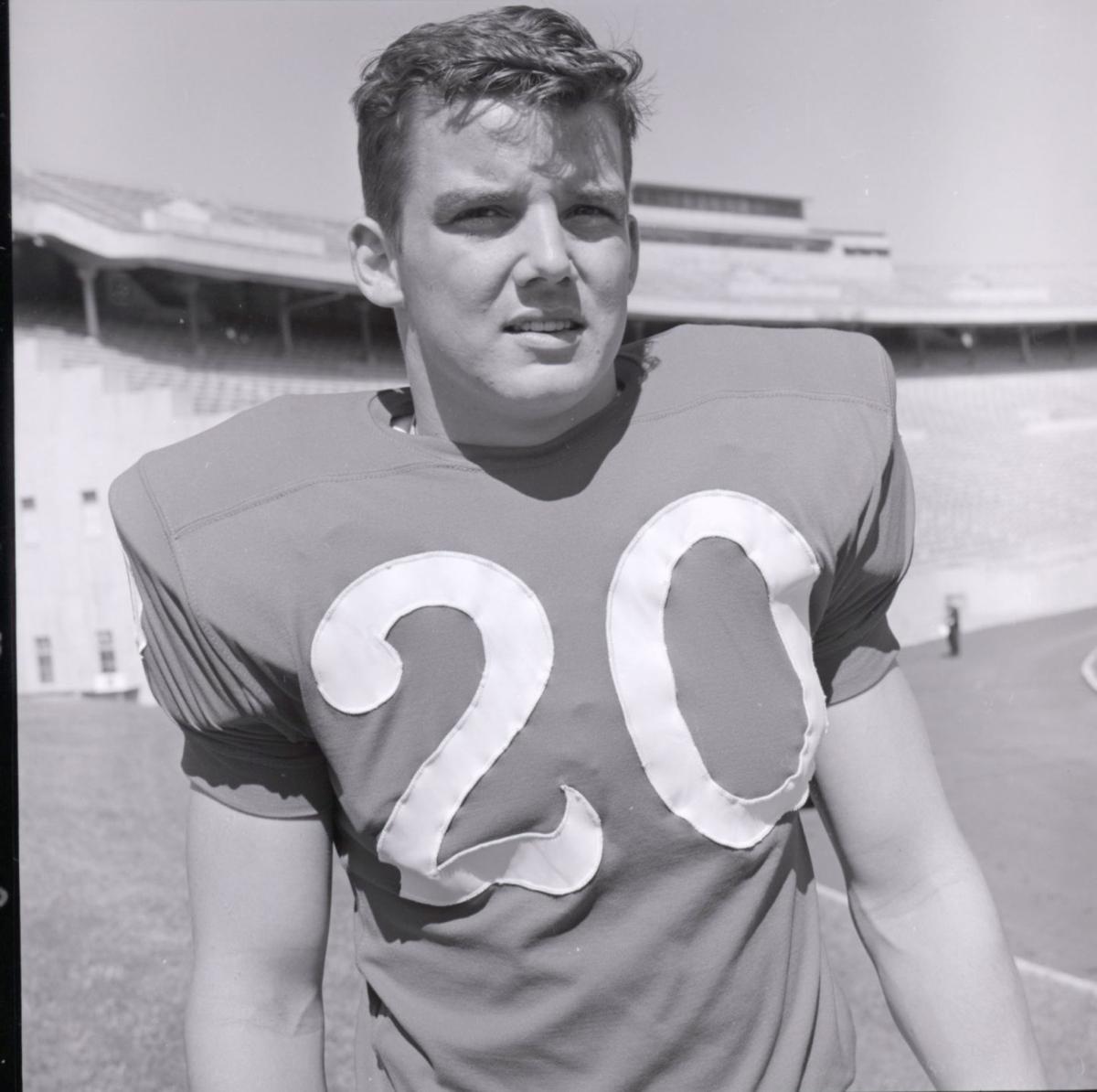 Warren Powers during his time playing for Nebraska.