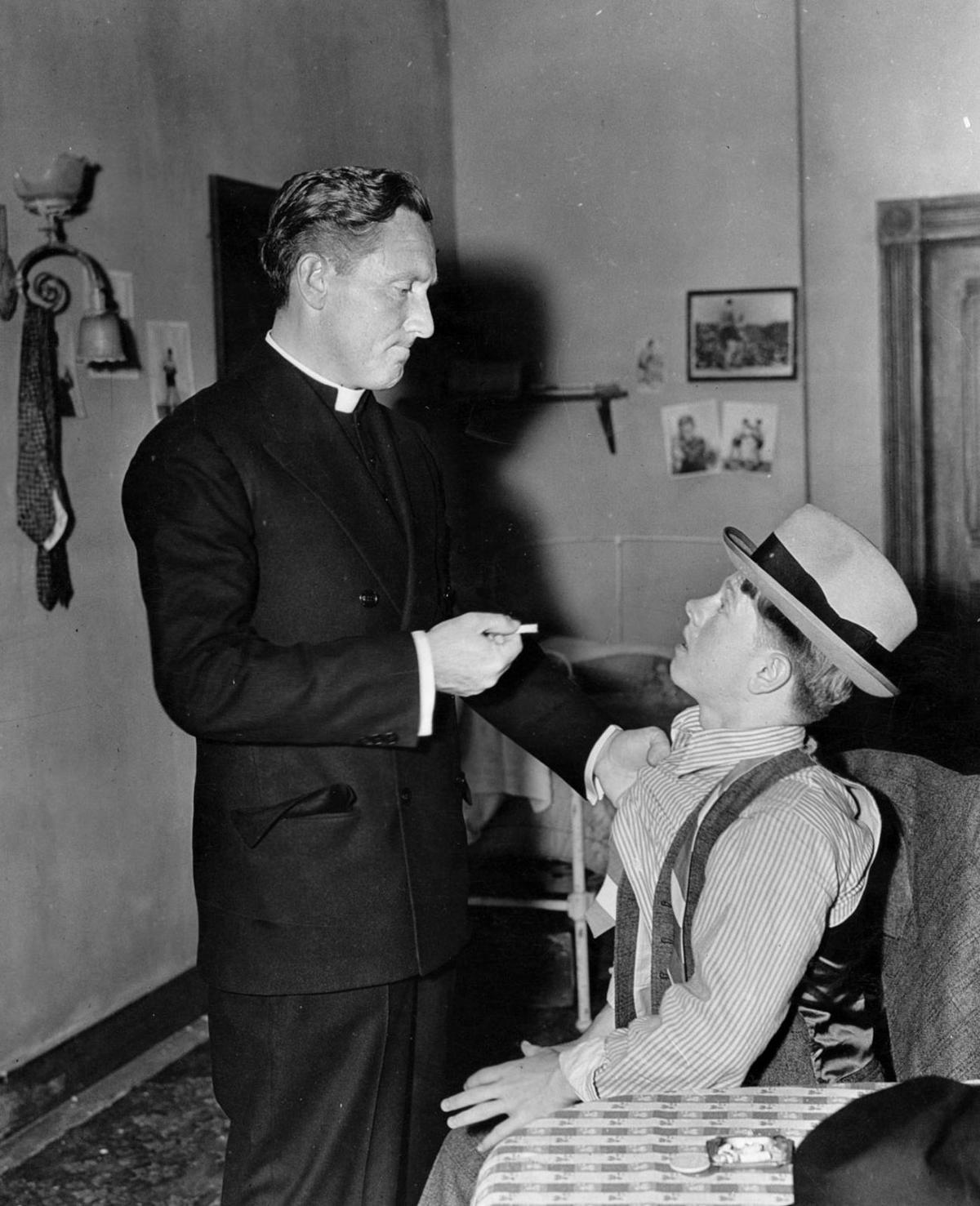 Spencer Tracy and Mickey Rooney in a still from “Boys’ Town.

In August 1997, Americans received word of the car crash in Paris that claimed the lives of Princess Diana, her boyfriend, Dodi Fayed, and their driver, Henri Paul.

Spencer is an English surname meaning “dispenser,” the official on a noble estate who disbursed provisions. All estates had a spencer, so it’s a common surname. Almost 140,000 Americans bore the last name Spencer in 2010, ranking it 199th.

Noble English Spencers trace their ancestry to Sir John Spencer, a wealthy livestock trader who purchased the Althorp estate in 1508.

King Henry VIII knighted him in 1519. One of his descendants married a daughter of John Churchill, the first Duke of Marlborough. The surname changed to Spencer-Churchill, and the family spawned British Prime Minister Sir Winston Churchill (1874-1965).

When surnames were adopted as first names around 1700, boys named Spencer appeared. It was soon more popular in the United States. The 1850 census found 3,868 Americans with the first name Spencer, while in 1851, there were only 1,116 in Britain, when the total populations were near equal.

Television series “Spenser for Hire,” starring Robert Urich as a Boston private-eye, ran 1985-88. Created by bestselling novelist Robert B. Parker in 1973, Spenser never reveals his first name. 1986 was the first of 10 years that spelling Spenser made the top thousand list. Main spelling Spencer rose to 106th in 1989.

Spencer’s occasionally given to girls — most famously to Spencer Hastings (Troian Bellisario), the lead character of teen mystery thriller “Pretty Little Liars” (2010-17). She’s surely why Spencer made the top thousand list for girls in 2017.

Spencer’s now receding, ranking 316th in 2020. Still, its two centuries of regular use qualify it as an All-American name.

PennyWise Episode 39: Easy ways to save money on holiday decorations this year

Here's why Ocean Spray cranberry sauce labels are upside down

Perhaps one of the great Thanksgiving mysteries is the cranberry sauce, and not why people eat it: Why are the labels on Ocean Spray cans upside down?

Omaha couple's wedding was all there in black and white

Ex-etiquette: What to do when a bonus family wants to get together but can't

"The key is to remember what the Thanksgiving holiday is symbolizing — being grateful for your blessings."

Do you know the busiest day for plumbers? Or how many millions watch football on TV? How about the most disliked dish? See more tips and trivia for Thanksgiving travel, shopping, food and football.

It's all about Victorian at this Council Bluffs house, unless it's Christmas

With plenty of room in the 2,000-square-foot house, Nate Watson hauls out 27 Christmas trees, 23 of which are at least 3 feet tall and completely decorated with lights, garlands and ornaments.

A woman's husband of 50 years has had an "emotional affair" for a year with an old flame from college but refuses to own up to it.

Love French toast? Your day is coming up. Celebrate National French Toast Day on Sunday by making one of these three recipes.

"Recently, he matched a Christmas sweater with worn sweatpants, bright yellow socks and too-big sandals. I happily sent him on his way to school, proud that he managed to do it all himself."

Worried about child's future fertility and COVID-19 vaccine? Know the truth about the risks

Now that the COVID-19 vaccine is being rolled out for children ages 5 to 11, parents are asking their pediatricians many questions.

Spencer Tracy and Mickey Rooney in a still from “Boys’ Town.

In August 1997, Americans received word of the car crash in Paris that claimed the lives of Princess Diana, her boyfriend, Dodi Fayed, and their driver, Henri Paul.