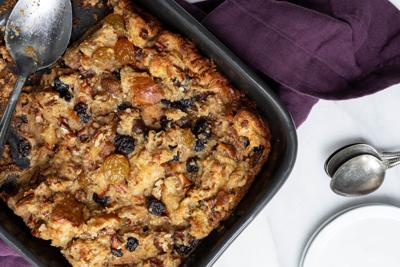 In the Spirit is sponsored by Certified Piedmontese Beef in Omaha, Nebraska.

Full of deep, warm flavors, my take on bread pudding is an ideal make-ahead recipe that is quick to execute and will hold for at least two days. This decadent dish is equally delicious served at home on your breakfast table or served as a rustic dessert.

Bread pudding is essentially just cubed bread mixed with whole milk (or cream) and eggs and baked in a casserole dish – it can be made sweet or savory and requires little technical skill in the kitchen. If you can make French toast, you can make bread pudding!

I use brioche in this recipe because it’s eggy and buttery, amping up the richness of the pudding. If you can’t find brioche, a good quality white or even multigrain bread will work, but don’t use sourdough here. The sour quality won’t match well with the other flavors.

The raisins are soaked in bourbon (or whiskey) overnight to plump them up and infuse them with boozy, warm flavor and aroma. If you want to omit the bourbon, you certainly can, but I would recommend zapping the raisins in the microwave with some water for a few seconds to achieve a similar juicy effect. I’ve added walnuts for crunch, which adds a nice textural contrast – you can use pecans or even chopped almonds if you’d like.

Really, the only way to screw this recipe up is if you don’t allow the bread to fully soak up the custard mixture. You want the bread to drink in your custard so it’s creamy and soft – if it looks like you don’t have enough custard, just whisk together some more milk and another egg and add it to the bowl a bit at a time. You don’t want the mixture to be soupy, but you definitely don’t want it to be dry.

This bread pudding doesn’t need to be served with a sauce, but you could drizzle it with warmed maple syrup at breakfast or a caramel or vanilla sauce after dinner. I like it just scooped warm out of the casserole dish and paired with strong coffee or, in the evening, a tiny nip of bourbon. Either way, you can’t go wrong.

Emmy-winning host Cat Neville is the publisher of Feast Magazine and the producer of tasteMAKERS, which airs nationally on PBS. She has been in food media for about 20 years and when she’s not on the road, she can usually be found playing around with new flavors in her St. Louis kitchen.

|Preparation | In a small bowl, mix raisins and ½ cup bourbon. Allow to sit for a few hours or overnight. When ready to make the bread pudding, drain most of the bourbon from the raisins, leaving just a bit in the bowl.

Preheat oven to 350 degrees. Generously butter a 9-by-13-inch baking dish and set aside. In a large bowl, mix the milk, butter, eggs, brown sugar, cinnamon and 1 Tbsp bourbon until well blended. Add bread cubes and mix gently, coating the bread evenly with the custard, then gently stir in raisins and walnuts. Pour the bread pudding into your prepared pan and bake until the top is golden and crisp, 40 to 50 minutes. Allow to cool for 15 to 20 minutes before serving.

A look at COVID-era alcohol sales by the numbers

Many shopping habits and trends have emerged since the start of the coronavirus pandemic, not the least of which is a significant spike in alcohol purchases.

4 things to know about the health benefits of mushrooms

Mushrooms are often placed in the vegetable category for dietary recommendations, but they are actually fungi. Here's what else you should know.

The events also help business owners reap some profits during the pandemic.

Taco Bell is bringing back potatoes

Taco Bell knows you're upset about losing potatoes. It's sorry, and it's bringing them back.

Slow cooking chicken wings is a seriously underrated technique. It’s set-it-and-forget-it levels of easy, and the end result makes for some of the juiciest, fall-off-the-bone meat you could ever imagine.

The Kitchn: Bacon, egg and cheese hand pies are even better than the classic sandwich

These hand pies pack in the very best parts of the classic breakfast sandwich, with a twist that makes them feel a little bit fancy. 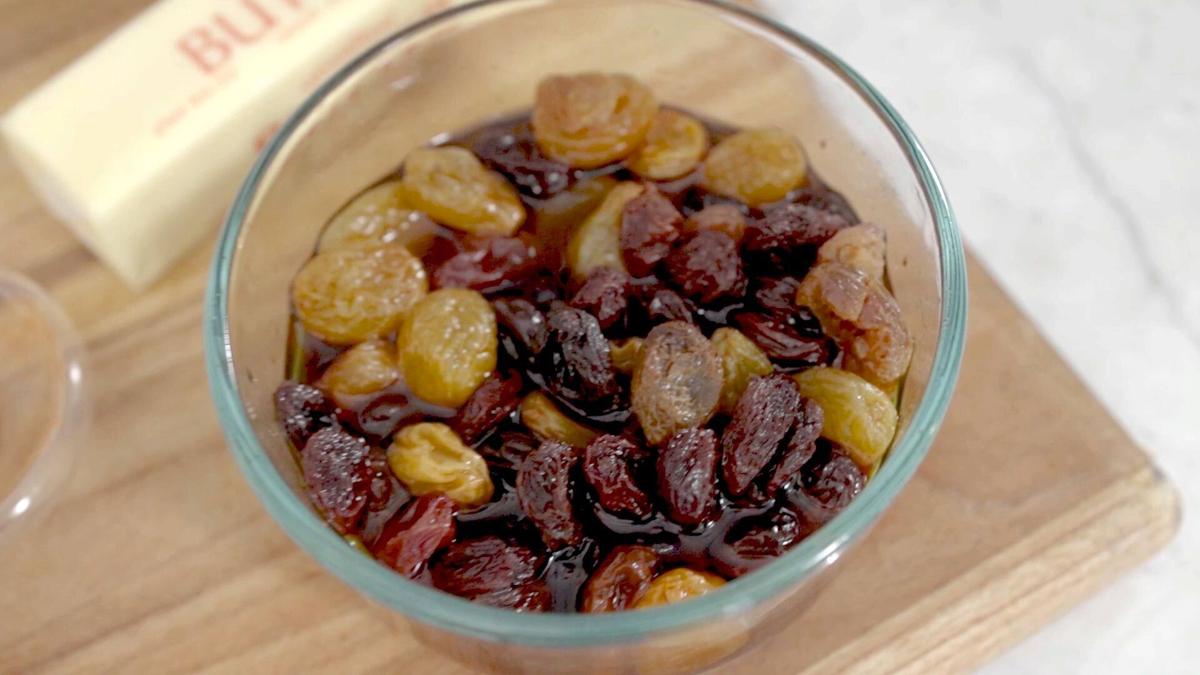 Soak the raisins overnight in a bourbon or whisky to infuse them with a boozy, warm flavor. 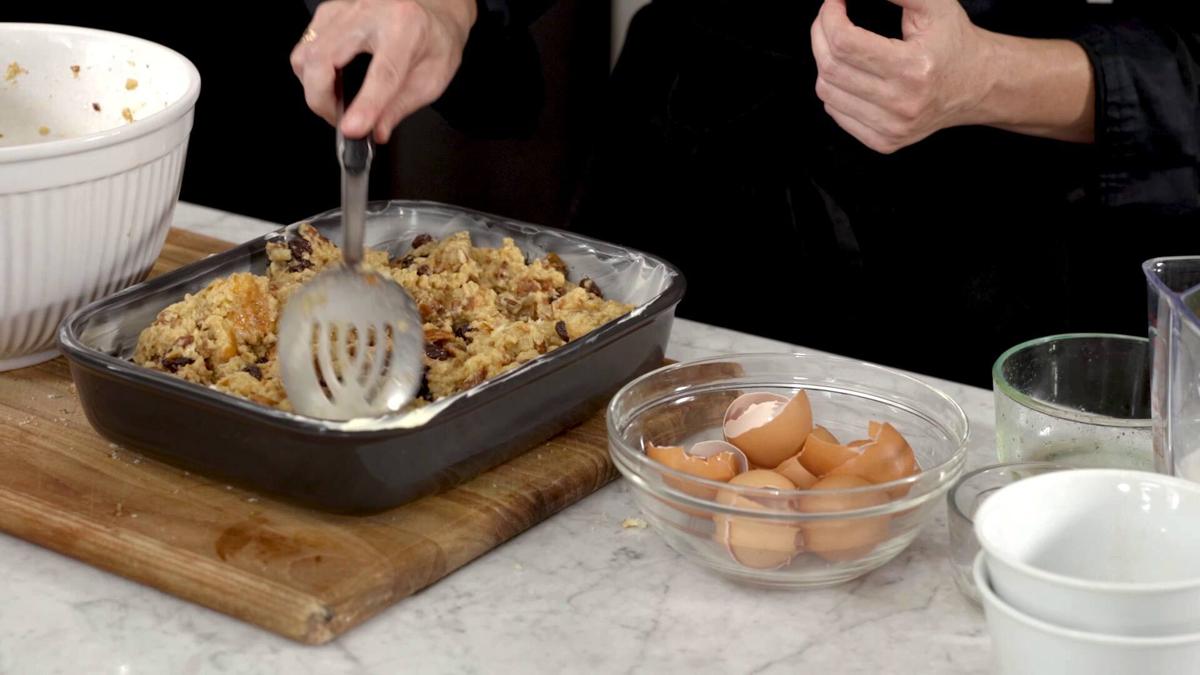 Mix together cubed bread, whole milk (or cream) and eggs. Bake in a casserole dish until golden brown. 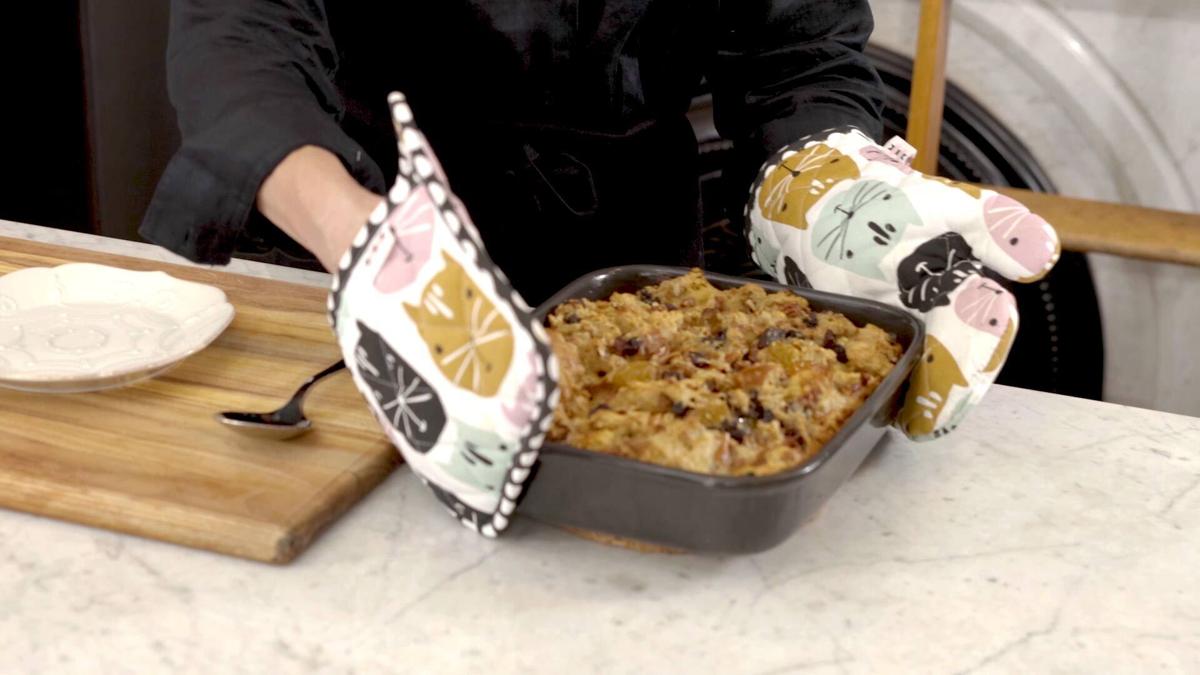 Pair a warm, gooey scoop of this bread pudding with a nice, strong cup of coffee or maybe a smooth bourbon.