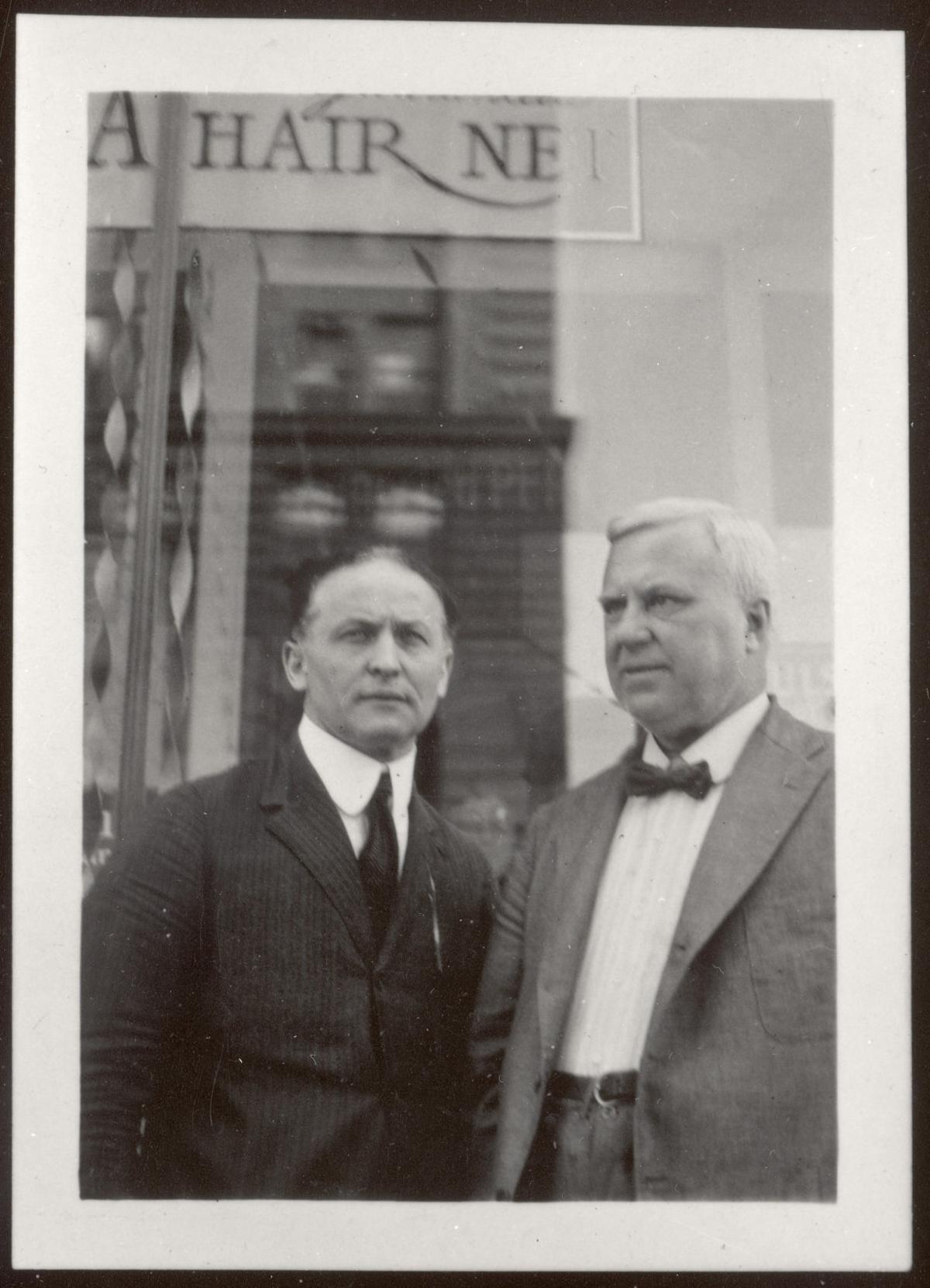 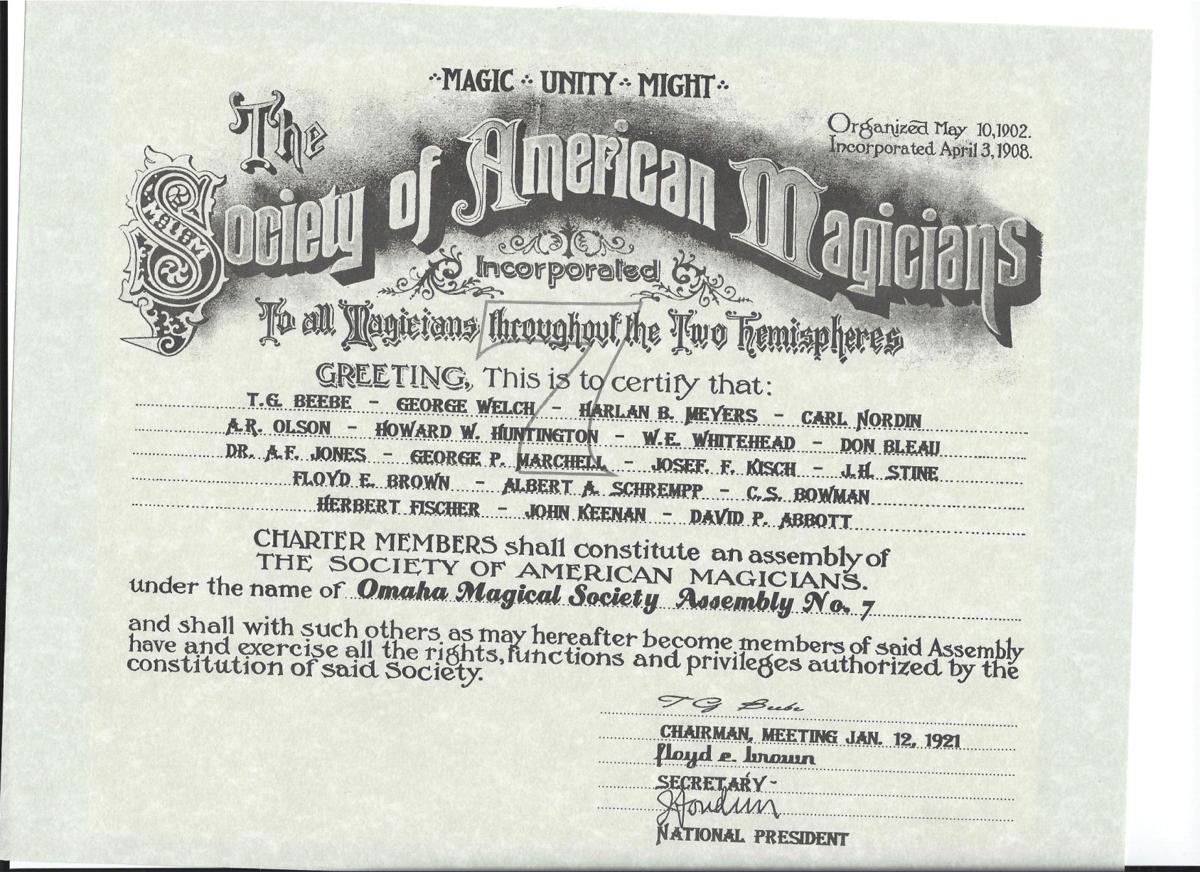 The charter for the Omaha Magical Society, signed by Harry Houdini, then-president of the Society of American Magicians, in 1921. 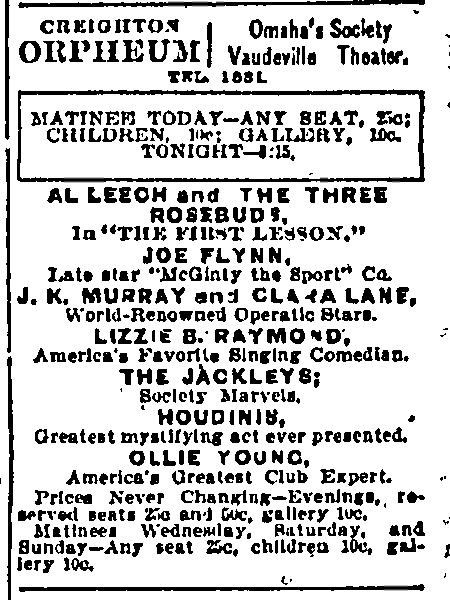 An advertisement for the Creighton Orpheum theater that appeared on April 5, 1899, in the Omaha World-Herald mentions Harry Houdini.

Omaha is a magical place.

No, the streets don’t course with a mystical energy. But the city has seen its fair share of fantastic escapes, talking tea kettles and amazing magicians.

Take the sunny September day in 1923 when Harry Houdini hung from the third floor of the Omaha World-Herald building.

He was upside-down, bound in a straitjacket. More than 10,000 people watched as it took him less than 2 minutes to escape.

Omaha has a long history with magic, beginning with Houdini and extending through David P. Abbott, Johnny Carson and magicians of today. The current president of the Society of American Magicians is an Omahan — and he’s bringing the group’s national meeting to town next year.

The city helped shape the history of magic. And magic shaped Omaha, too.

Houdini, the great escape artist, got his big break in Omaha in 1899 — when The World-Herald called him “the modern Merlin” — and he returned many times to perform. Houdini died on Halloween 90 years ago at age 52.

Then there was Abbott, the amateur Omaha magician whose books were so popular and tricks so magnificent that they brought the most famous magicians of the era to his home on Center Street, the only place he ever performed.

Abbott was a member of the Society of American Magicians and one of the founding members of the Omaha chapter.

“He did so much for magic,” said Omahan Jeff Quinn, president of the national group that includes about 5,000 magicians. Quinn has changed the group’s membership cards to include a picture of Abbott.

The Omaha Magical Society was the seventh local chapter in the national organization. Houdini was the president at the time, and Omaha’s charter was signed by Houdini himself in 1921.

“When he would tour he would meet up with magicians in the cities where he was touring. He’d buy them lunch or buy them dinner and then urge them to begin an SAM assembly,” Quinn said. “He did that here. We went with it.”

Long before that, Houdini got his start here.

After years of performing on vaudeville stages and not going anywhere, Houdini got a break at a beer hall in St. Paul, Minnesota.

“He was seen by a promoter named Martin Beck, who himself was turning into one of entertainment’s biggest tycoons,” said Max Sparber, a researcher with the Douglas County Historical Society. “Beck brought Houdini some handcuffs and watched him escape, and offered him a gig in Omaha.”

“You can open Omaha March twenty sixth sixty dollars, will see act probably make you proposition for all next season,” read the message from Beck, who was with the Orpheum vaudeville circuit.

Houdini kept the telegram. At the bottom, he later wrote, “This wire changed my whole life’s journey.”

“Houdini performed in Omaha, and Beck offered to be his promoter, which made Houdini’s career,” Sparber said.

A week later Houdini appeared at the Creighton Orpheum theater for a week straight, garnering headlines nearly every day. (That theater was torn down and a new Orpheum Theater — the one we know now — opened on the same site in 1927.)

“In less time considerably than it took to perform the task of adjusting this array of jail ‘jewelry,’ he returned from an adjoining room ... relieved from the entire paraphernalia. ... How it was done is the secret from which Houdini derives his living.”

An advertisement called him the “greatest mystifying act ever presented.” (Evening seats cost 10 to 25 cents.)

Then on April 8: “Houdini puzzles them all.”

For that day’s challenge, Houdini went up against a group of local businessmen who bet $500 he couldn’t escape a pair of handcuffs. Houdini broke free in 4 minutes and 13 seconds.

He was a regular on the Orpheum circuit, a chain of more than 20 vaudeville theaters and movie houses that spanned the country from Los Angeles to Chicago.

Houdini returned many times over the years to Omaha, where he’d perform his dazzling escapes and meet with local magicians — including Abbott.

Abbott made his living as a money lender, but he loved magic. Though technically an amateur, he gained great fame among well-known magicians who would travel to his home to see him perform.

Abbott referred to his house near 33rd and Center Streets as “the house of mystery,” and he was visited often by famous performers including Houdini, Ching Ling Foo, the Great Blackstone and Harry Kellar.

“Even today when I drive by and look — all these big names in magic, they were all right there — it’s awe-inspiring to a magician to think that,” Quinn said.

Abbott’s renown even brought famous magicians here after his death.

Teller, the diminutive and silent half of magic duo Penn & Teller, visited Abbott’s former Omaha home in 2004 while researching a book on Abbott.

“Misdirection is what Abbott was an absolute genius at,” Teller told The World-Herald in 2013.

Abbott wrote the popular book “Behind the Scenes With the Mediums” in an effort to debunk spiritual mediums, and he later wrote books that described his own magic tricks.

He once demonstrated to World-Herald reporters how spiritualists faked photographs of ghosts by creating double exposures, and he explained Einstein’s theory of relativity in the paper.

Abbott performed and created tricks for the joy of it, and he was surprised when his works earned money.

“It’s a source of genuine pleasure for me to be able to entertain folks with my magic,” Abbott told The World-Herald in 1923. “It is an art that I value too highly to commercialize. My desire, in addition to searching for genuine evidence of life after death, is to create things which money cannot buy.”

Though those magicians were prominent nearly a century ago, magic has continued to be important in Omaha.

Johnny Carson, who grew up in Nebraska, performed as the Great Carsoni before joining the Navy and later becoming a broadcaster, for which he became enormously famous. He often performed magic tricks on “The Tonight Show.”

Carson was a member of the Omaha Magical Society, which currently boasts about 50 members.

And Quinn, the parent organization’s president, will bring the Society of American Magicians’ annual meeting to Omaha next year.

In January, three days of meetings will be capped by a banquet and performance by magicians from all over the country.

“I’m going to be showing off Omaha,” Quinn said.

In this illusionist's house of mysteries, secrets didn't vanish

In the early 20th century, David Abbott hosted some of the world's most famous magicians -- Harry Houdini, Harry Kellar and Han Ping Chien, among them -- at his midtown home, wowing them with his own tricks.

Graham's work on another Omaha magician, David Abbott, attracted the attention of Teller, a young magician who — with Penn Jillette — achieved fame as the comedy-magic duo Penn & Teller.

Giroir: This is how we get out of the pandemic

Biden Covid-19 adviser: Here's who may get vaccine first

Biden Covid-19 adviser: Here's who may get vaccine first

The charter for the Omaha Magical Society, signed by Harry Houdini, then-president of the Society of American Magicians, in 1921.

An advertisement for the Creighton Orpheum theater that appeared on April 5, 1899, in the Omaha World-Herald mentions Harry Houdini. 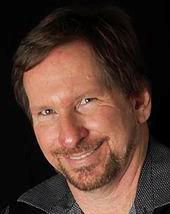