Fast COVID-19 tests get a tryout with the Huskers, other Big Ten teams
0 comments
Share this
{{featured_button_text}}
1 of 2 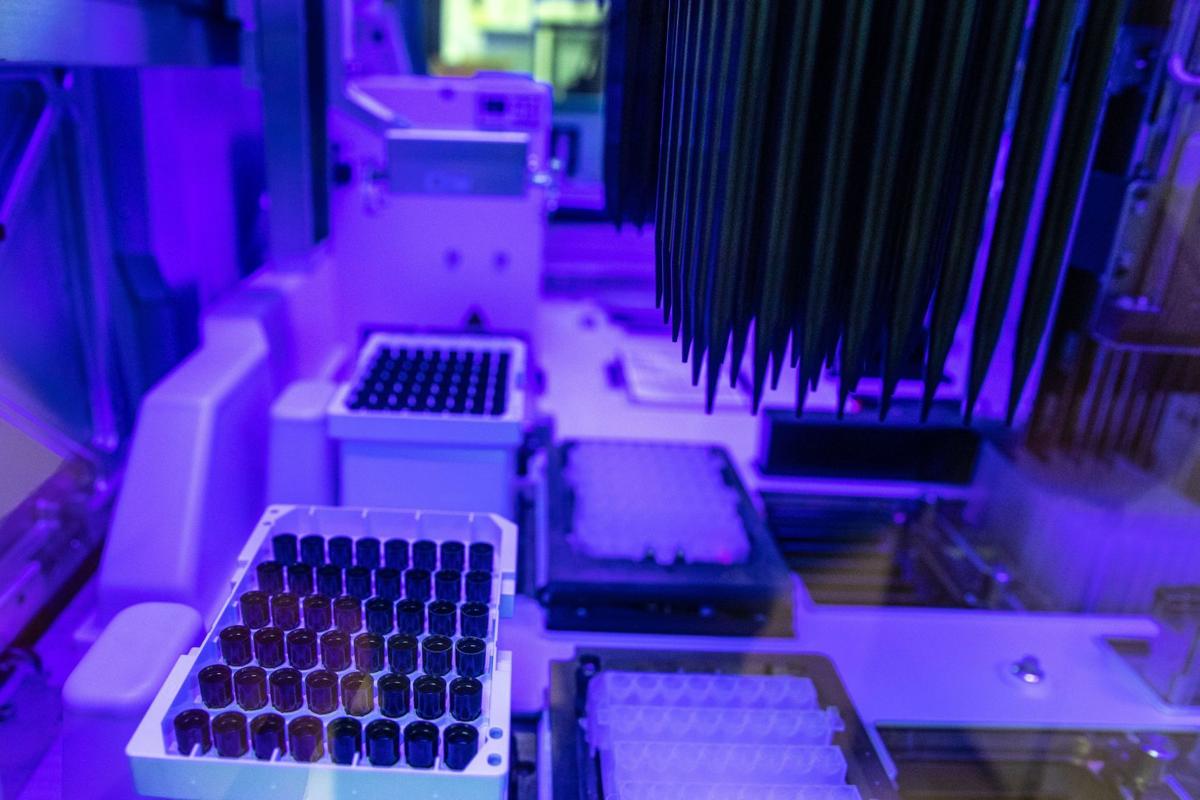 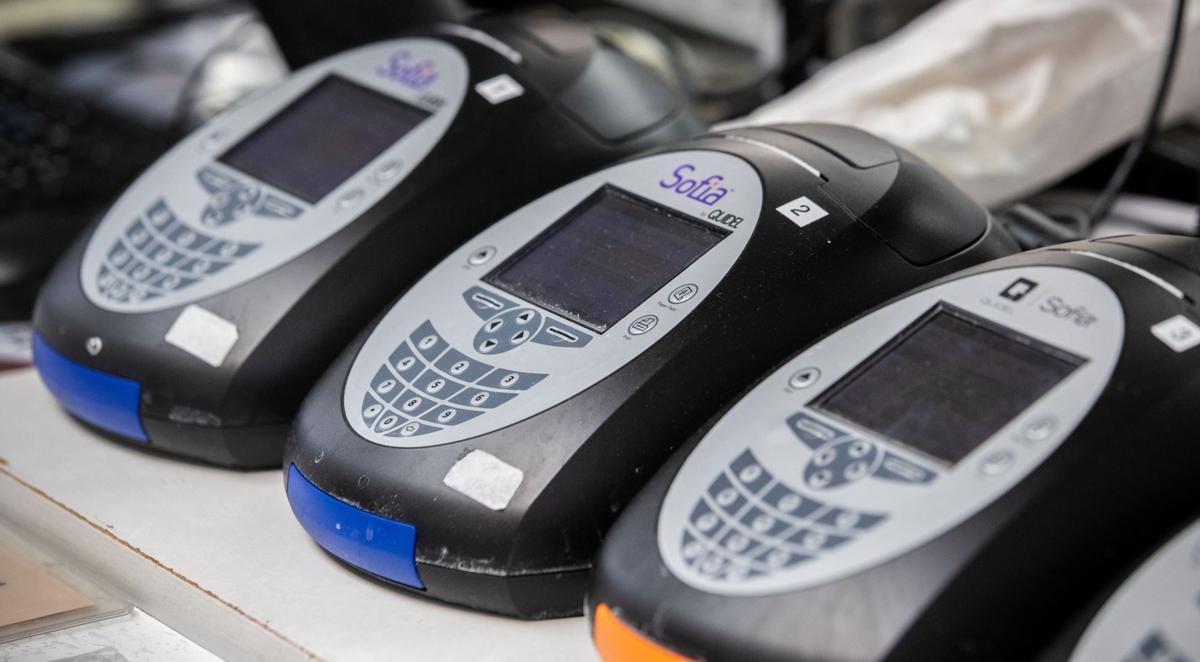 It’s just a black plastic box that looks like a cross between an office desk phone and a credit card machine.

But antigen testing machines like those in Nebraska Medicine’s clinical laboratory in Omaha are being credited with helping the Huskers and the rest of the Big Ten get back to playing football this fall.

A newer version of the device set up inside Memorial Stadium could be used to run daily COVID-19 tests on Husker players, coaches and others in the coming weeks. The tests are part of the medical protocols the Big Ten will require during its shortened season.

Antigen tests, commonly used in doctor’s offices for influenza, detect proteins known as antigens that have been collected on nasal swabs or in saliva. While they’re less sensitive than the gold standard test — PCR, or polymerase chain reaction — they’re faster and cheaper and can be conducted by a trained technician.

PCR tests detect and amplify viral genetic material. They must be done by laboratory professionals in high-tech labs. The largest of the PCR machines in the Nebraska Medicine lab measures roughly 10 feet long and more than 4 feet wide.

Antigen tests “offer a lot of flexibility,” said Dr. Scott Koepsell, the clinical lab’s medical director. “And widespread testing is going to be a key to containing this (virus).”

Indeed, some scientists nationally have called for rapid, more frequent testing to screen workers, students and others. The aim, they say, is to catch people who are contagious, including some who haven’t yet developed symptoms — or never will have them. Some proponents even have promoted tests, which aren’t yet available, that would be cheap and simple enough to use at home.

One concern driving such calls is the time it takes people to get PCR test results. Health officials have voiced concerns that some who get tested aren’t isolating as they wait for the results, continuing with their usual activities instead.

According to the state’s COVID-19 dashboard, the overall turnaround time on tests in Nebraska is running just under three days. One national lab is taking four days. TestNebraska’s turnaround time is 3½ days on average. Labs operated by universities and health systems are returning results in one to two days.

Pour said this week that it’s taking an average of nearly 3½ days for county residents to go and get tests after experiencing symptoms. From the time they get tested to the time the county gets the results is another 3½ days. By the time county health officials notify an infected person, more than 6 days have passed, as has much of the 10-day isolation period recommended by the federal Centers for Disease Control and Prevention.

People with concerns about the antigen tests say those less-sensitive tests might miss people who are infected with the virus, giving them a false negative and leaving them free to spread the virus.

Koepsell, who will serve as interim director of the NU testing lab, said that’s the rationale for frequent testing. If the antigen tests are done often enough, they eventually will catch those who are infectious.

Just how often is enough isn’t yet known. The Big Ten will require daily antigen testing. Athletes who test positive will have to be given a PCR test to confirm the results.

Meanwhile, more of the faster tests are beginning to make their way into use, and new types are being developed. Federal officials have pledged to significantly ramp up the availability of such point-of-care tests as early as this fall.

Koepsell said the federal government initially purchased large numbers of the three major antigen test platforms now available so they could be distributed to screen high-risk groups, such as nursing home staff and residents. The makers now have either filled those orders or will do so in the next couple of months, allowing them to fill other orders.

Point-of-care tests, in fact, already have begun arriving in Nebraska nursing homes. As of midweek, 135 of the 188 facilities scheduled to get them had received the machines, according to the Nebraska Department of Health and Human Services.

Two models, including the Sofia device purchased by the university, require machines to read them. But the third, expected in December, comes as a card. Like a pregnancy test, it displays two lines if positive and one if negative. It also can be read with a cellphone app.

Koepsell said the University of Nebraska-Lincoln bought its machine before the Big Ten came out with its recommendations. He said he doesn’t know which platform the Big Ten will choose.

The antigen tests, similar to pregnancy tests, rely on what’s known as lateral flow technology. With the Sofia, a patient’s nasal swab is placed in a tube with a solution. A technician uses a pipette to drop a bit of the liquid into a well on a small cartridge that also holds a paper strip. The liquid moves across the strip, which contains an antibody that binds to the antigen. If viral antigens are present, a fluorescent indicator glows and the machine picks it up.

Such tests cost about $20 to $40 on average, Koepsell said. The machines themselves can cost several hundred dollars. The card version is being advertised for about $5 a test. PCR, on the other hand, costs from $60 to $100 per test and takes a few hours.

Daily swabbing, Koepsell said, does not pose a risk of damage or infections, but it is uncomfortable and can cause nosebleeds, particularly in those who have nasal polyps or allergies. “But it’s a small price to pay to be safe,” he said.

The CDC advises people who test positive to isolate for 10 days. After that, they’re no longer considered infectious. But athletes and others who have had COVID-19 can’t just be taken off the list for testing because they could become infected again.

Antibody tests, which detect proteins the immune system produces when it responds to an invader, can indicate whether someone has been exposed to the virus in the past. But Koepsell said researchers at the University of Nebraska Medical Center have documented cases, albeit infrequently, of people who have gotten COVID-19, produced antibodies and gotten infected again. A few such cases have been reported in medical literature.

In the future, he said, researchers hope to have antibody tests, like those available for hepatitis immunization, that will allow them to check whether a person is protected.

“I believe the daily testing will keep them safe,” Koepsell said of the football players. “But we’re also going to learn a lot.”

All of the tests will produce a flood of results. Scott Holmes, manager of the Lincoln-Lancaster County Health Department’s environmental public health division, said the data will be managed separately so that it doesn’t dilute the county’s test results. They will do the same with testing from nursing homes.

Koepsell, for his part, admitted that he, like many others, is ready for some football.

“I think they’ve done it in a safe way and a thoughtful way, and I just think we needed it at this time,” he said. “So I’m very excited.”

The aim is to help individuals, and the health care system, avoid a simultaneous run of influenza and COVID-19.

What we've learned about COVID-19, and some key questions we're still facing

“There’s been a whole lot of learning since this started,” said Dr. Angela Hewlett, who directs the COVID-19 infectious diseases service at the University of Nebraska Medical Center.

Assistance money hasn't fully covered the declines in revenue or the increased expenses hospitals have faced since the pandemic began, the association said.

While schools will use them to screen kids for symptoms of COVID-19, the other aim is to see whether the data can help forecast hot spots in the state weeks before new outbreaks are officially reported.

Even after the infection is gone, symptoms linger for COVID-19 'long-haulers'

While most people infected with coronavirus recover quickly with no lingering effects, an unknown number of people report continued symptoms weeks, even months, after their initial illness.

Husker commit Branson Yager makes the most of unpredictable season; 'Every week could be your last'

Nebraska offensive line commit Branson Yager of Utah knows how lucky he is to be playing this fall. His team playing well, too? That’s icing on the cake.

Twenty-four residents and staff members at Crowell Memorial Home tested positive for the virus as of Friday.

Nebraska Medicine dealing with 'security incident' affecting its IT systems

The investigation into what happened is still in its early stages, spokesman Taylor Wilson said, "and we can't yet speculate on the nature and scope of the incident."

Big Ten coaches are 'raring to go,' but are concerned for player safety amidst ramp up to football

Big Ten coaches were united in wanting to play football this fall. Now armed with a 2020 schedule, their approaches to the next month of preparation won’t be nearly as uniform.

OPS Superintendent Cheryl Logan said the plans are more than a chance to screen and surveil for COVID-19 cases. The effort would allow for other kinds of data gathering.

McKewon: Big Ten football is coming back. Here are some early storylines to watch

Big Ten football is coming back in about one month, so Sam McKewon looks at some of the storylines to watch closely as teams return to full practices in preparation for the shortened season.

The computer network outage has led to the postponement of patient appointments this week.

No medical records were deleted, according to a statement. But when asked whether patient information was exposed, a spokesman said the statement contained all the information officials could provide.

Frequent COVID-19 testing is being used by Husker football. What about meatpacking plants?

Trying to get ahead of potential outbreaks, plant operators say they are rolling out surveillance testing programs that test a portion of plant workers on a weekly or biweekly basis.

Hospitalizations across the state have been steadily increasing since July 18, one health official said, with a 20% increase since Sept. 22.

MatMaCorp's testing system would be targeted toward laboratories in rural hospitals in Nebraska.

'Sleepless nights' and 'sacrifices': How the Huskers are working to prevent a COVID outbreak

When Nebraska kicks off against the Buckeyes, it will be the light at the end of a seven-month tunnel that began in mid-March as the coronavirus pandemic hit the United States.

New study: If 95% Americans wear masks it would save 130K lives

New study: If 95% Americans wear masks it would save 130K lives

Azar asked if Trump could have done more to slow pandemic

Azar asked if Trump could have done more to slow pandemic 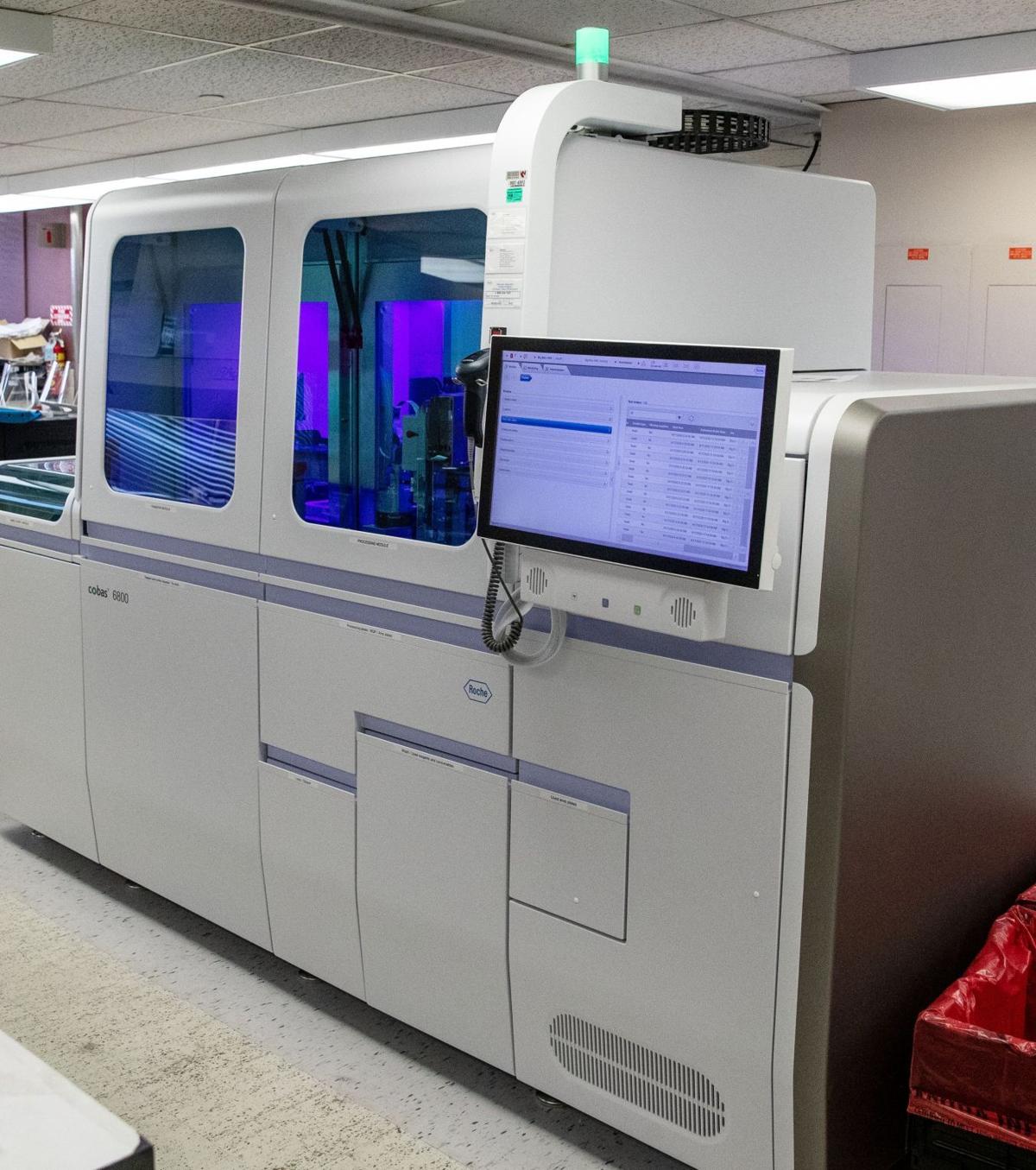 The Cobas 6800 testing machine, which can process COVID-19 tests using the PCR method, is roughly 10 feet long and more than 4 feet wide. 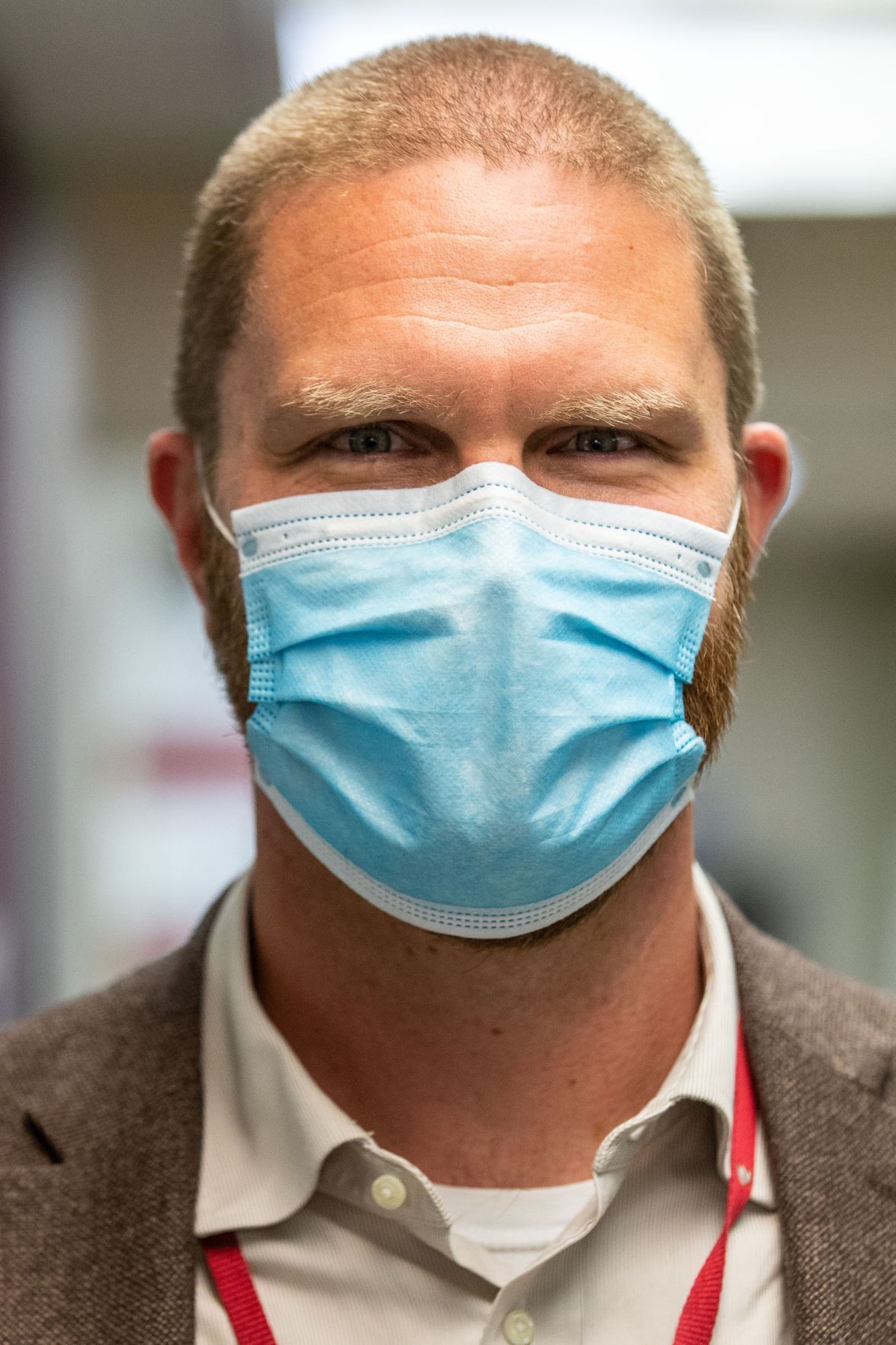