Record numbers of COVID-19 cases and hospitalizations have prompted health care providers to call for Nebraska Gov. Pete Ricketts to adopt stricter health measures to stem the spread of the disease.

“Nebraska hospitals are suffering,” Dr. Erica Carlsson, an emergency medicine physician at Nebraska Medicine, said on Twitter. “Our ER’s are jam-packed and we are tired. We need real mandates, enforcement of those mandates and action by the government. Nebraskans will suffer and many will die if we keep up this pace of COVID spread.”

Similar messages were posted online by health care providers from the two other Omaha-based health systems.

Nebraska COVID-19 hospitalizations have increase since three weeks after @GovRicketts moved to Phase 3 DHM on June 22 and precipitously increasing since move to Phase 4 on Sept 21. Time for data driven COVID response Nebraska pic.twitter.com/EqaVkYQkMN

The number of Nebraskans hospitalized with the virus — 748 on Friday, more than double the number three weeks ago and more than three times the late May peak of 232 — is already straining the health care system.

This spring’s peak single-day statewide case count was 677 on May 7.

It was Nebraska’s third straight day of single-day records for new cases and topped by more than 550 the cases reported Thursday.

In addition, the COVID-19 case count for the seven-day period that ended Friday topped 10,000 for the first time, totaling 11,048.

Some of the increases in cases in rural areas have been even more dramatic on a per capita basis.

John Lowe, assistant vice chancellor for health security at the University of Nebraska Medical Center, said the White House Coronavirus Task Force’s threshold for closing indoor dining and capping gatherings at 10 people is 100 cases per 100,000 people over a seven-day period. The state now has 23 counties adding cases at a rate greater than that, according to COVID Act Now.

Dr. James Lawler, a director at UNMC’s Global Center for Health Security, said health care providers’ calls for more action reflect “the frustration and desperation that my colleagues are experiencing.”

A key difference from May, Lawler said, is that many patients who became seriously ill then could be transferred to larger hospitals.

“Now our large hospitals are as full as they were in the spring, but all of the rest of the hospitals are full, too,” he said. “There’s nowhere to decamp patients to.”

Lawler said most Nebraska communities should not be allowing gatherings of more than 10 people. Nor should indoor dining at restaurants be allowed because people take off their masks to eat and drink.

Researchers now know that the virus can spread beyond 6 feet. Spending extended time in close contact also increases risk, so even sitting 12 feet apart for an hour and a half without masks can prove risky.

Face coverings, which reduce the amount of virus people can spread, should be worn everywhere in public, Lawler said.

A spokesman for Ricketts said the governor’s decisions regarding pandemic restrictions are based on science and data, not social media campaigns and tweets.

Ricketts said Thursday that he wanted to wait several more weeks to see the impact of directed health measures put into effect last month that prohibited standing-room crowds in bars and restaurants and decreased indoor capacity limits, among other things. He continued to implore Nebraskans to take steps to prevent the spread of the virus.

But Lawler said it makes sense to call for more aggressive measures.

“If what you’re doing isn’t working,” he said, “you need to do something different.”

“The fact of the matter is we are seeing a significant increase in COVID patients while still needing to continue to take care of non-COVID patients,” said Kelly Driscoll, the health system’s president and CEO.

McNea said that on Thursday night, the hospital transferred three patients to hospitals in Grand Island, Norfolk and Kearney. The North Platte hospital has inquired about transferring patients to Colorado hospitals, but those facilities have also been taking patients from Wyoming.

On Friday, the North Platte hospital fielded requests to take patients from as far away as Kansas.

“So this isn’t just a state of Nebraska situation,” McNea said. “This is a Midwest issue.”

Meanwhile, the hospital is searching for nurses and plans a campaign to ask retired nurses to return to work, he said.

McNea said state officials have predicted that Nebraska will see more than 1,000 patients hospitalized with COVID-19 by the end of the month.

Indeed, COVID-19 case counts continue to rise in the state as a whole and in many parts of Nebraska that previously had seen few of them.

Shannon Vanderheiden, executive director of the West Central District Health Department, noted that the six-county district’s per capita rate of new cases exceeds that of New York in the spring and is double that of the rest of Nebraska.

The child, who is under 10, is being treated at Children's Hospital & Medical Center in Omaha for multisystem inflammatory syndrome in children, or MIS-C.

Social visiting will not be allowed. The rule applies to all hospitalized patients regardless of their illness or disease.

Under an agreement approved Monday, OPS will partner with UNMC and others to pilot what appears to be a first-of-its-kind COVID-19 testing program.

Rising cases of COVID-19 in Nebraska have begun translating to an increase in deaths. The state recorded 55 deaths last week after logging 44 the week before.

The Kwik Shop at 3632 Avenue G in Council Bluffs will be cleaned and sanitized after an employee tested positive, the company said.

The new COVID-19 restrictions go into effect at midnight Wednesday. They will be in effect through Nov. 30.

The Omaha hospital is hiring individuals to assist medical workers with personal protective equipment to better protect staff and patients.

Nebraska tallied more than 11,000 new cases during the seven-day period that ended Saturday, close to double the nearly 5,800 new cases of two weeks ago.

'I finally got my wish': Sen. Groene, who wants herd immunity, catches coronavirus

"I had it, I got over it and everything's fine," Nebraska State Sen. Mike Groene said. "I have no unique story."

The announcement comes as the state again reached a new all-time high with 820 patients hospitalized with COVID-19. That's more than double the number reported three weeks ago.

Omaha extends mask mandate until Feb. 23 amid surge in cases

The City Council voted 4-1 to extend the mandate by more than three months as coronavirus numbers surge in Nebraska.

CDC says face masks protect the wearer and those around them

The agency also noted in the update to its guidance on face coverings that the benefits of mask-wearing increase the more people wear them consistently and correctly.

Ricketts warns of tighter restrictions, but no mask mandate, if hospitalizations keep rising

Gov. Pete Ricketts said Thursday he will impose more restrictive health measures if COVID-19 hospitalizations continue rising in the state, but he continued to oppose a mask mandate.

An Omaha anti-mask group funded two short-lived billboards and informally made plans for a protest this weekend at a Hy-Vee.

Gov. Pete Ricketts lays out plans for more restrictions should COVID patients fill 25% of beds. At the current rate of increase it would be only a few days before Nebraska hits the that mark.

The Douglas County Health Department is closing its vital statistics office to walk-in customers because of the spike in COVID cases.

Closing their buildings for the holiday week will give more time for staff and students to finish quarantines. It also is an opportunity to scrub buildings, they say.

The deaths of 74 Nebraskans were reported during the seven-day period that ended Saturday. That was up from 55 deaths reported in each of the past two weeks. 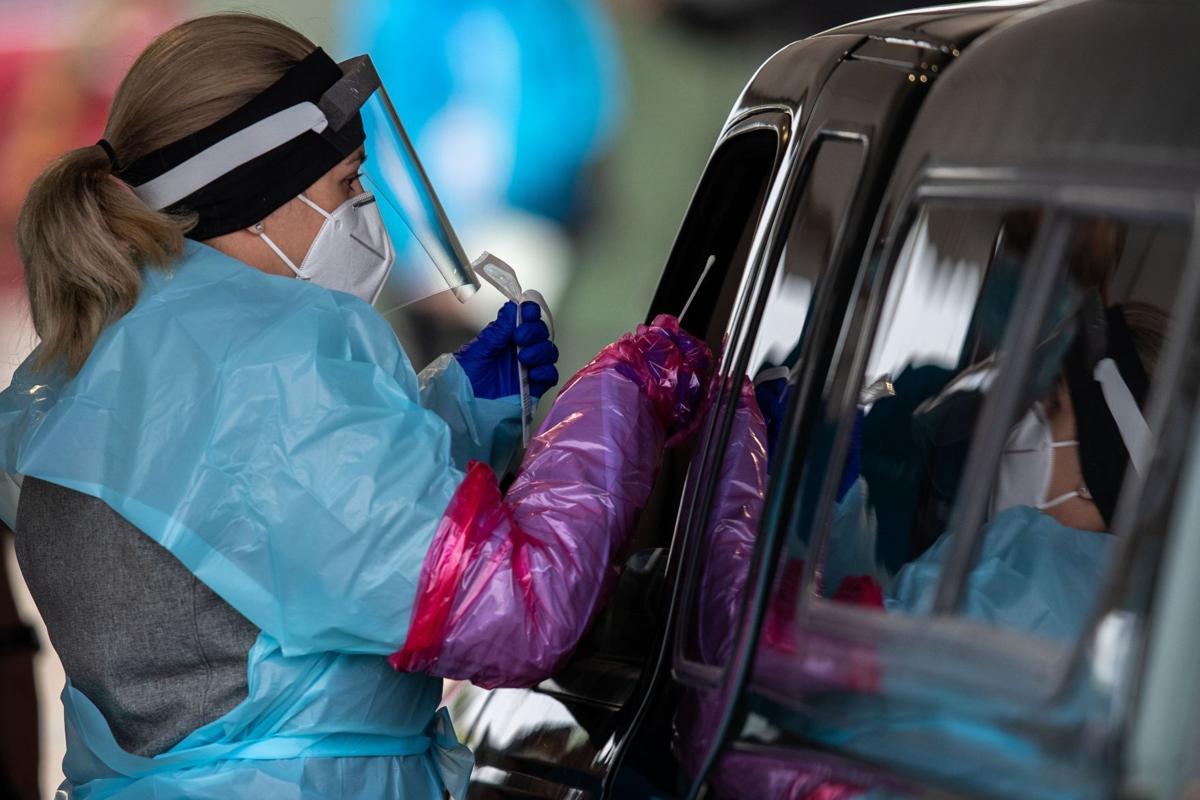 A worker tests for the coronavirus at a drive-thru testing site on May 4. Nebraska reported 2,681 new cases on Friday, the third straight day of record new cases.