Sign up here to get the latest health & fitness updates in your inbox every week! 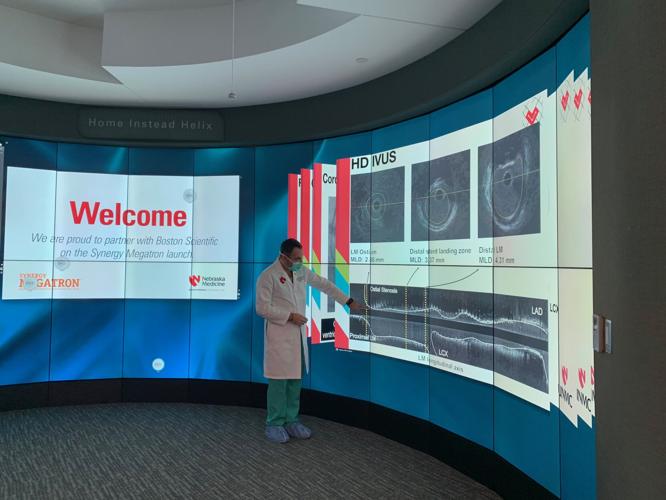 Dr. Yiannis Chatzizisis, an interventional cardiologist with Nebraska Medicine, gives a post-surgery briefing about the new Megatron stent, used for the first time in the U.S. last week at the Nebraska Medical Center. 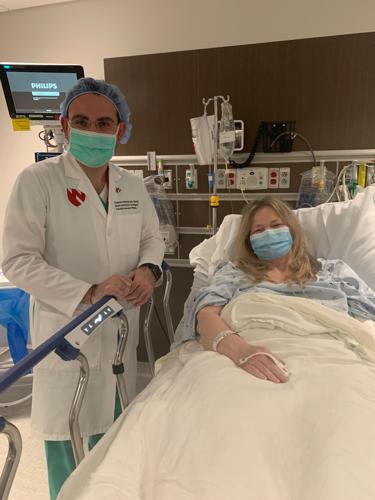 Chatzizisis, left, with Omahan Kate Kilcoyne, who became the first patient in the U.S. to receive the new Megatron stent in a procedure at the Nebraska Medical Center.

Kate Kilcoyne remembers the months-long ordeals her father and brother went through when they had open heart surgery in the 1970s.

The procedure involved cutting open their chests and breaking ribs. Since then, the Omaha woman has marveled at the advances she has seen in cardiology.

Last week, Kilcoyne got to experience one of those advances firsthand. She became the first patient in the United States to receive a new, stronger and more flexible heart stent designed for large vessels — and appropriately named Megatron — during a procedure at the Nebraska Medical Center. The next day, she returned to her home in midtown Omaha.

“It’s just shy of miraculous what they can do,” she said.

Kilcoyne was one of two women to get the new stent that day. The devices, developed by medical device-maker Boston Scientific, was approved last month by the Food and Drug Administration.

'It's going to save lives': New type of heart transplant performed in Nebraska

Like other stents, the Megatron is threaded through the blood vessels to the heart and placed inside a blocked vessel. Its job is to hold the artery open and allow blood to flow more freely. Stenting the arteries can offer an alternative to the more invasive open heart bypass procedure.

Until now, however, stents essentially have been a one-size-fits-all tool.

Not only is the new stent stronger and more expandable, its diameter can be adjusted, allowing one end to be narrower than the other.

“It’s ideal on this left main intervention where we need a strong, stiff and expandable (device) to keep the arteries open,” said Chatzizisis, who was instrumental in bringing the device to the medical center.

Dr. Daniel R. Anderson, chief of cardiovascular medicine at UNMC, said the new stent allows for more of a precision medicine approach. “These are big steps forward in the care of the patient,” he said.

Chatzizisis said left main artery disease accounts for between 5% and 10% of blockages in the heart arteries. But the blockages are becoming more frequent as people live longer.

Such blockages can have serious consequences. Kilcoyne said she had been finding it more difficult to walk in her neighborhood. Walking the hills, in particular, caused chest pain and shortness of breath.

Chatzizisis said the second patient’s pumping function had been significantly reduced because her heart was starving for blood.

Kilcoyne said she already as feels as if she will end up feeling better than she had been.

“It certainly was a wonderful opportunity, in that I needed it,” she said.

Midlanders of the Year: Nebraska's health care workers lead the fight against COVID

Sign up here to get the latest health & fitness updates in your inbox every week!

US to declare monkeypox a public health emergency

The U.S. will declare a public health emergency to bolster the federal response to the outbreak of monkeypox that already has infected more than 6,600 Americans, according to AP sources

Health officials recommend that anyone infected with the coronavirus isolate for at least five days. But for many, that timeline is overly optimistic.

500K American men get vasectomies every year. A specialist explains the easy and reversible procedure

As more younger, single men ask for one following the Supreme Court abortion decision, a urologist explains what to expect with a vasectomy.

Could this type of cheese protect your bones? Plus, global warming may mean unfit kids, and more health news

Enjoying just two slices of a certain type of cheese every day may help stave off osteoporosis, a small Norwegian study suggests. Get that and more recent health news here:

Jennette McCurdy, who co-starred in Nickelodeon shows “iCarly” and its spin-off “Sam & Cat,” has written a book called “I'm Glad My Mom Died.” McCurdy tells about growing up with an abusive mother who she says pushed her into showbiz, encouraged her to starve herself and who insisted upon bathing her daughter into her late teens. Debra McCurdy died in 2013 from complications of cancer. It's taken McCurdy years of therapy to get to the point where she is able to not only share her story, but laugh about parts too. She also hosts a podcast called “Empty Inside” and says she no longer has an eating disorder.

A Nebraska woman has been charged with helping her teenage daughter have an abortion. The charges come after investigators obtained Facebook messages in which the mother and daughter discussed using medication to end the approximately 24-week pregnancy. Nebraska law prohibits abortion after 20 weeks. Prosecutors charged 41-year-old Jessica Burgess with helping her then 17-year-old daughter end her pregnancy and then burning and burying the fetus. Madison County Attorney Joseph Smith says he's never had a case involving an illegal abortion in his 32 years as the prosecutor.

Biden to sign executive order to protect travel for abortion

President Joe Biden will sign an executive order aimed in part at making it easier for women seeking abortions to travel between states to obtain access to the procedure. One of the directives Biden will issue Wednesday will allow states that have not outlawed abortion to apply for Medicaid waivers that would help them treat women who've traveled from out of state. The order will also call on health care providers to comply with federal nondiscrimination laws and streamline the collection of key maternal health data. The order falls short of what many Democratic lawmakers and abortion advocates have demanded of Biden since the Supreme Court’s decision overturning Roe vs. Wade.

Biden steps out of the room and finds legacy-defining wins

Over five decades in Washington, Joe Biden knew that the way to influence was to be in the room where it happens. But in the second year of his presidency, some of Biden’s most striking, legacy-defining legislative victories have come about by staying out of it. It's a counterintuitive turn for Biden, who's long promoted his decades of Capitol Hill experience. Biden’s aides chalk up his victories to the fact that he's playing the role of cheerleader rather than legislative quarterback. Democratic Sen. Jon Tester of Montana says that in Biden's heart, he's a U.S. senator. And because of that, Tester says Biden "understands allowing this to work is how you get it done.”

U.S. Sen. Rand Paul's wife says her husband wants to subpoena the records of the country’s top infectious disease expert. Paul’s wife, Kelley, made the comments during the political speaking at the Fancy Farm picnic Saturday in western Kentucky. She waded into the dispute between her husband and Dr. Anthony Fauci while promoting her husband's bid for a third term. Sen. Paul is being challenged by Democrat Charles Booker, a former state lawmaker. He told the crowd that Paul votes against the interests of Kentuckians. Booker denounced Paul as a “terrible senator” and an “embarrassment” to the state.

The Senate has approved Democrats' big election-year economic package. The legislation is less ambitious than President Joe Biden’s original domestic goals. But it embodies deep-rooted party dreams of slowing global warming, moderating pharmaceutical costs and taxing big corporations. Debate began Saturday and went around the clock into Sunday afternoon. Democrats had swatted down some three dozen Republican efforts to torpedo the legislation. Biden is urging swift House passage, and the House seems on track to provide final congressional approval when it returns briefly from summer recess on Friday.

Heavy backpacks are taking a toll on children's health

Cut the cost of preventative care by making these changes

Cut the cost of preventative care by making these changes

Dr. Yiannis Chatzizisis, an interventional cardiologist with Nebraska Medicine, gives a post-surgery briefing about the new Megatron stent, used for the first time in the U.S. last week at the Nebraska Medical Center.

Chatzizisis, left, with Omahan Kate Kilcoyne, who became the first patient in the U.S. to receive the new Megatron stent in a procedure at the Nebraska Medical Center. 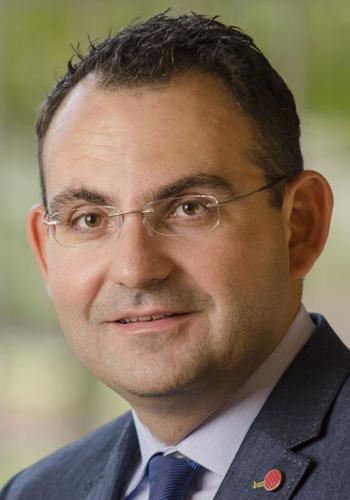