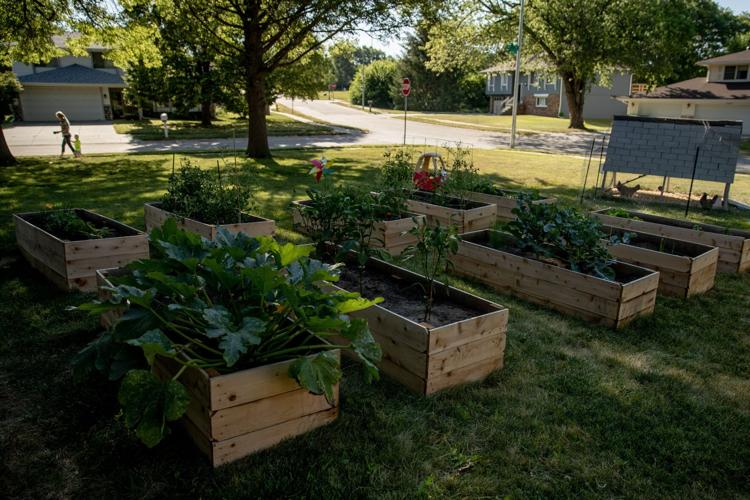 Ten raised garden beds and a chicken coop in the yard of Morgan Rye-Craft in Millard. Neighbors have called the landscaping “tacky,” but “every time I roll up it makes me happy,” Rye-Craft said. 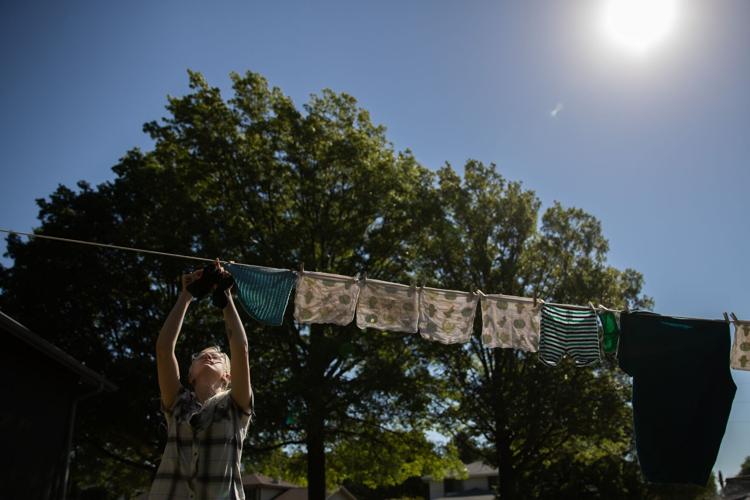 Morgan Rye-Craft, 27, hangs clothing to dry. The plan is to add a fence when prices for materials are more reasonable. 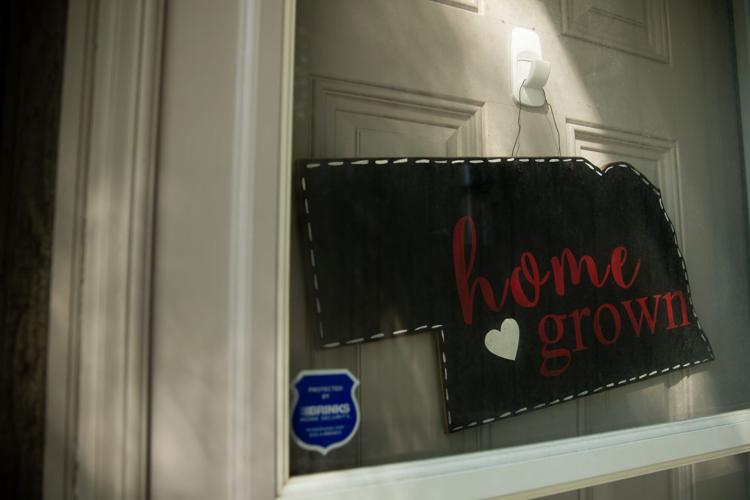 A Nebraska sign hangs on the front of Morgan Rye-Craft’s southwest Omaha home. 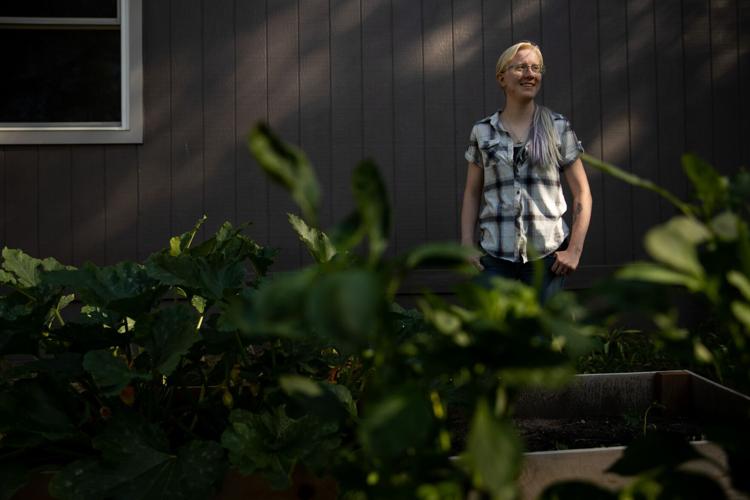 Morgan Rye-Craft, 27, works in the yard. They have 10 raised garden beds. 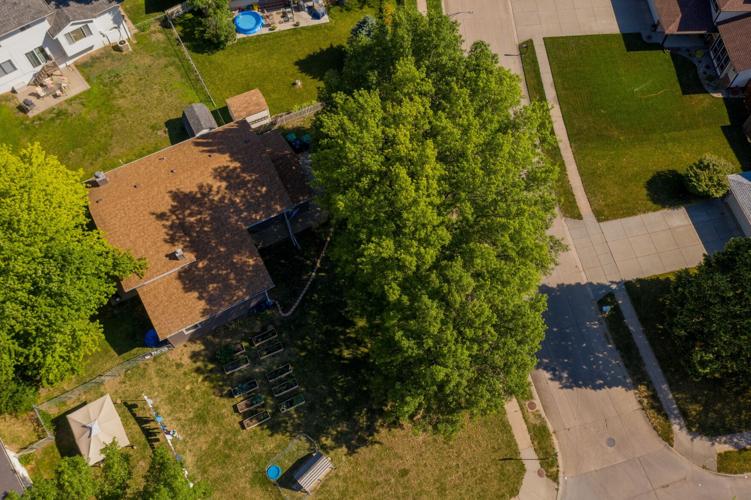 A drone photograph of the southwest Omaha yard.

Ten raised garden beds, a chicken coop and drying laundry swaying in the breeze are the first signs that these aren’t your typical suburban homeowners.

Certainly not at the front doorstep of the Stony Brook subdivision in Millard. The property’s landscaping has prompted complaints to the city because it doesn’t match the sea of green lawns dotted with pretty flowers that fill the rest of the neighborhood.

“The way it was explained to me is people think it looks tacky,” said Morgan Rye-Craft, who shares the house in question with husband Ean Craft, their son Quinn-Michael and Craft’s sister and brother-in-law, Reneelynn and Cade Parker.

Some neighbors have raised concerns, saying that the large corner lot at the entrance to the subdivision is one of the first visitors see. They worry it will bring down property values.

To the two couples, the examples of sustainable living in their yard are a beautiful sight. The raised beds, filled with flourishing herbs and vegetables, will feed them throughout the winter. The three chickens provide eggs.

“Every time I roll up it makes me happy,” Rye-Craft said.

The families moved in together in March as part of their goal to practice a zero-waste lifestyle. They compost, recycle and share items on a buy nothing Facebook group.

Rye-Craft quit her job when Quinn-Michael was born to devote as much time as possible to making their lifestyle a success. She’s now working part time.

“I try to describe it as a mindset. It’s not necessarily that we don’t make waste,” she said. “We try not to buy anything that gets thrown away or reuse things we have. We always try to find a purpose for every item that gets brought into our house.”

After losing a chance at several other homes in a hot housing market, Rye-Craft was happy to return to Millard, where she grew up while soaking up her recycling skills from her grandmother.

She knew not everyone would appreciate the way they’re putting their yard to work, but the couples have been very careful to follow city rules. There are no covenant regulations.

Neighbor Chad Johnsen says it’s different from the majority of the neighborhood, and he’s heard some negative comments, but he thinks what they’re trying to accomplish is a positive.

“Growing your own food in your own yard is fantastic,” he said. “And having chickens for fresh eggs is great, too.”

The couples hope to become involved in the neighborhood association and welcome questions about what they’re doing in their yard. They try to keep the lawn, the coops and the garden beds as tidy as possible.

A fence will provide another solution. They had planned to add one this spring, but the high cost of lumber delayed that decision.

Rye-Craft said they understand it’s a different lifestyle and knew there could be pushback when they moved in. But it’s not something they’re trying to impose on anyone, though they would love to set an example for others interested in sustainability and helping the environment.

“We have tried really hard. We’re outside a lot. We’ve tried to introduce ourselves to everyone around us,” Rye-Craft said. “The majority of people around us think it’s neat.”

Urban Homesteading: Your Guide to Self-Sufficient Living in the Heart of the City by Kelly Coyne and Erik Knutzen

It's part of the state's celebration of the plants, and lots of activities are planned.

For the home cook, there are lots of native herbs to choose from in Nebraska

Growing herbs in containers or raised beds allows for more flexibility in how much moisture and drainage they receive. Mulching will help keep them from drying out.

Michael Pecha has planted about 90 species of native grasses and flowers on his Elkhorn property. He meticulously records everything he grows including if it’s native and where it originated.

In big transformation, Mulhall's seeks to become 'a hub' for Omaha nature lovers

Mick Mulhall said the changes are aimed at helping the environment and forming "a hub" for "people who care about plants and plant things and pollinators and gardening and getting outside.’’

The garden is feeding multiple pantries, with 1,539 pounds of food donated so far, and it’s become a learning center for children, teaching them about sustainable gardening and monarch butterflies.

Evans: Visitors from the south could be attacking your petunias and geraniums

They fly in every summer and snack on your flowers. Just pluck them off to avoid damage.

'This is America,' city councilman says of complaints about zero-waste property in Millard

Omaha City Councilman Don Rowe sees nothing wrong with the zero-waste lifestyle that two young couples are following in his district, as long as they are following city rules.

Vision of a view: Gardens bloom atop Cottonwood Hotel

The colorful flowers have become a favorite with guests. Thirty-six pots and window boxes dot the north terrace garden, filled with things like duranta and ficus trees and trellised roses.

Did you hear about the Roomba 'escape'? Papillion man supplies needed laughs with prank posts

WHO experts answer questions on monkeypox

How to cook safe at your summer BBQ

How to cook safe at your summer BBQ

Ten raised garden beds and a chicken coop in the yard of Morgan Rye-Craft in Millard. Neighbors have called the landscaping “tacky,” but “every time I roll up it makes me happy,” Rye-Craft said.

Morgan Rye-Craft, 27, hangs clothing to dry. The plan is to add a fence when prices for materials are more reasonable.

A Nebraska sign hangs on the front of Morgan Rye-Craft’s southwest Omaha home.

Morgan Rye-Craft, 27, works in the yard. They have 10 raised garden beds. 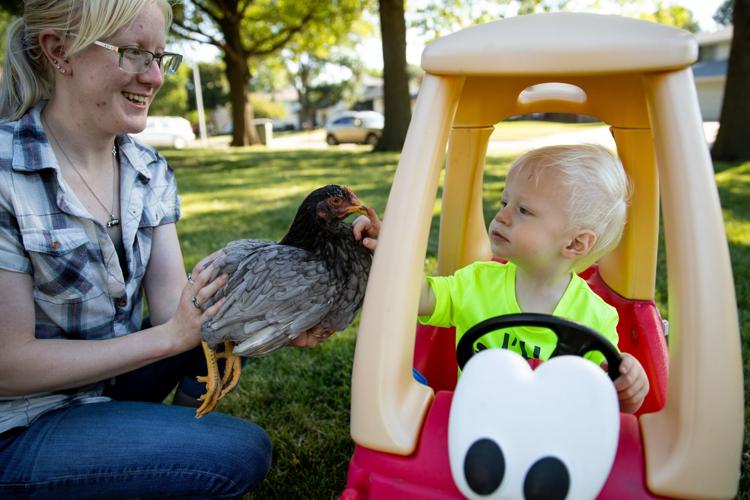 Morgan Rye-Craft holds a chicken for her son, 18 month-old Quinn-Michael, to pet while she works in the yard. 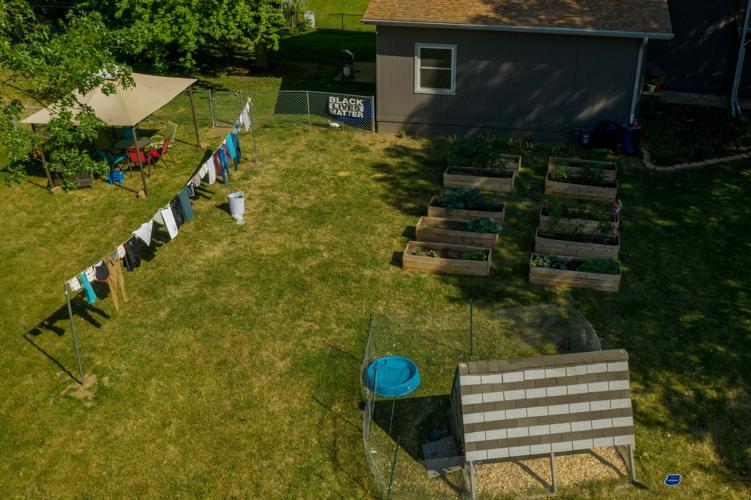 A drone photograph of the southwest Omaha yard. The two couples who live there are following a zero-waste, sustainable lifestyle by growing their own vegetables, raising chickens for eggs and drying clothes on the line.

A drone photograph of the southwest Omaha yard. 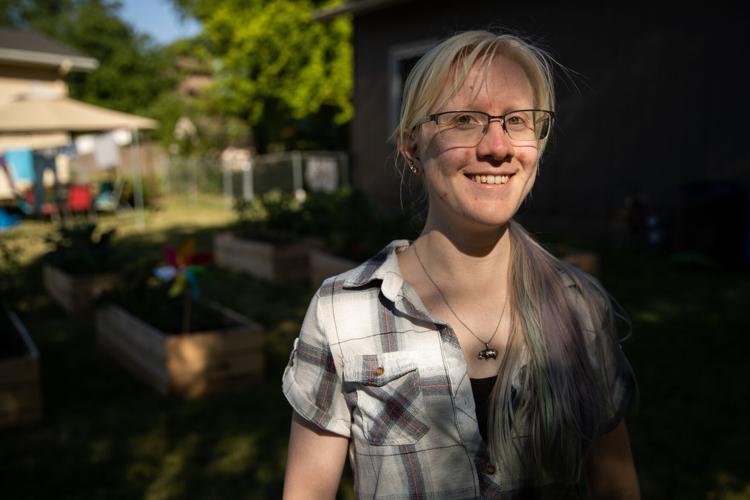