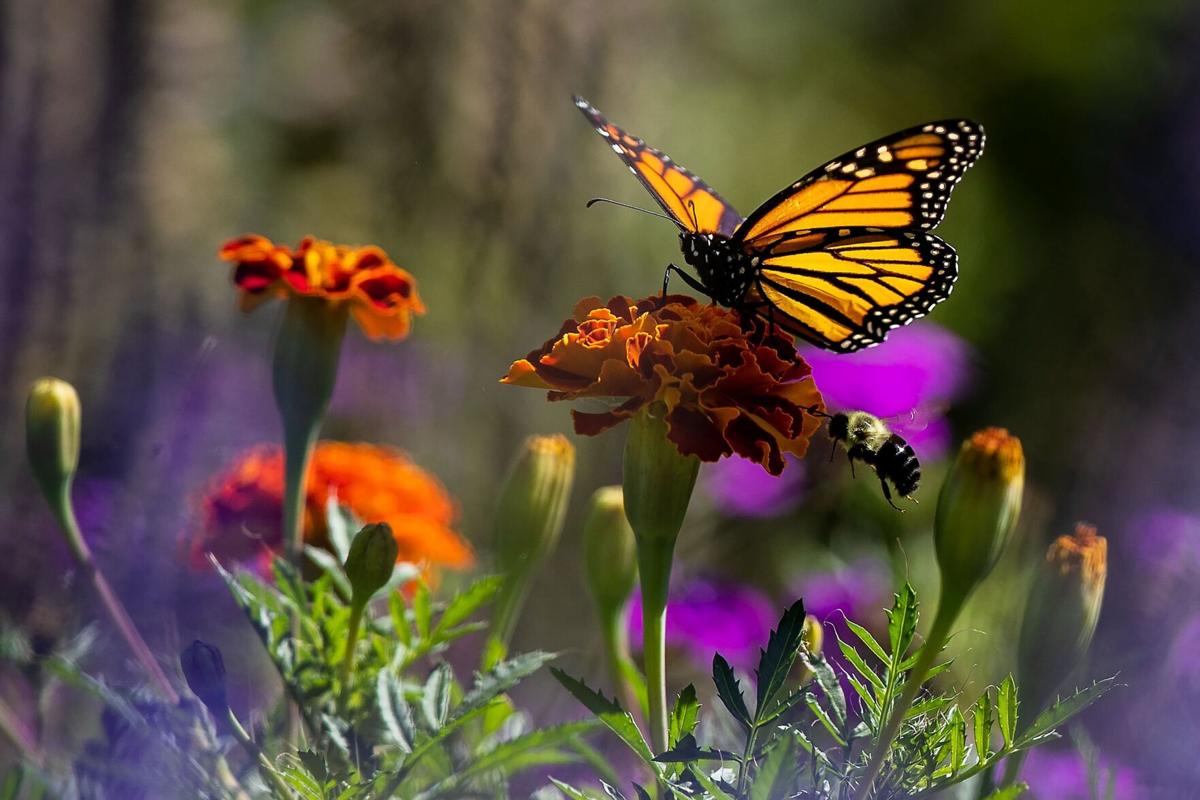 A monarch butterfly and bumble bee jostle for the same flower in the Minne Lusa pollinator garden. 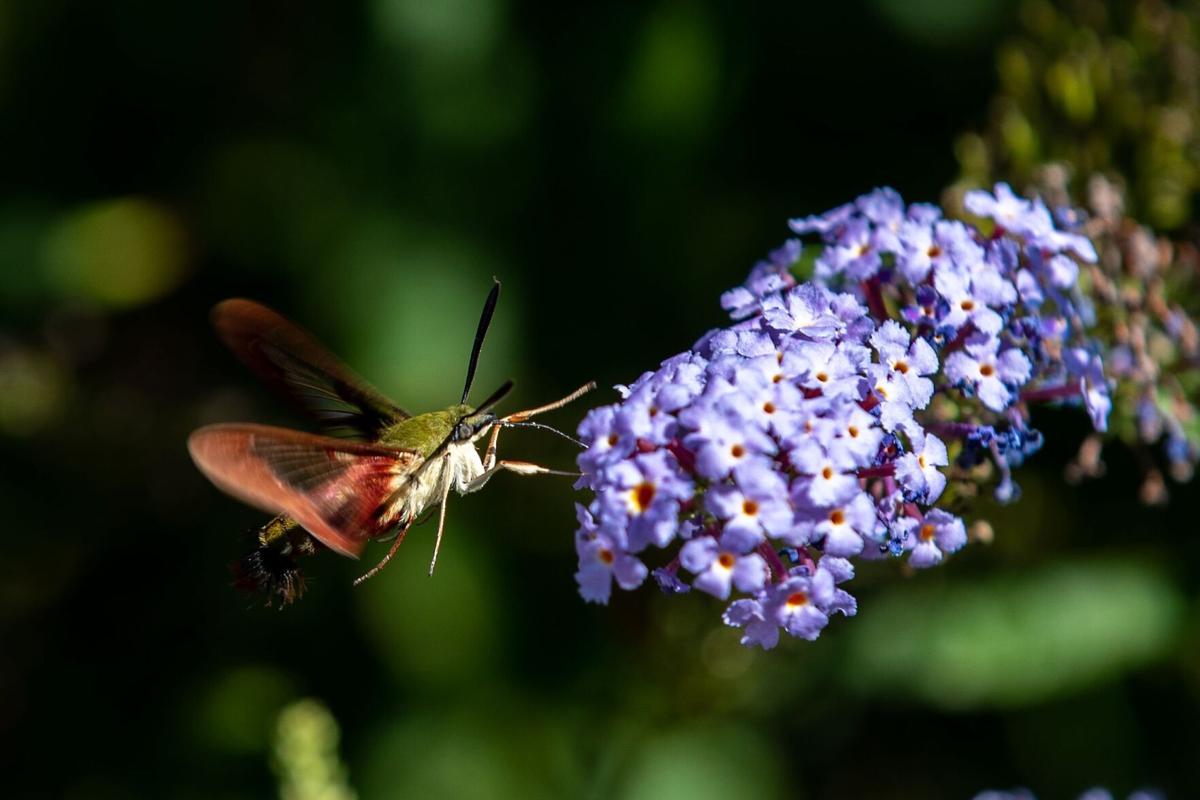 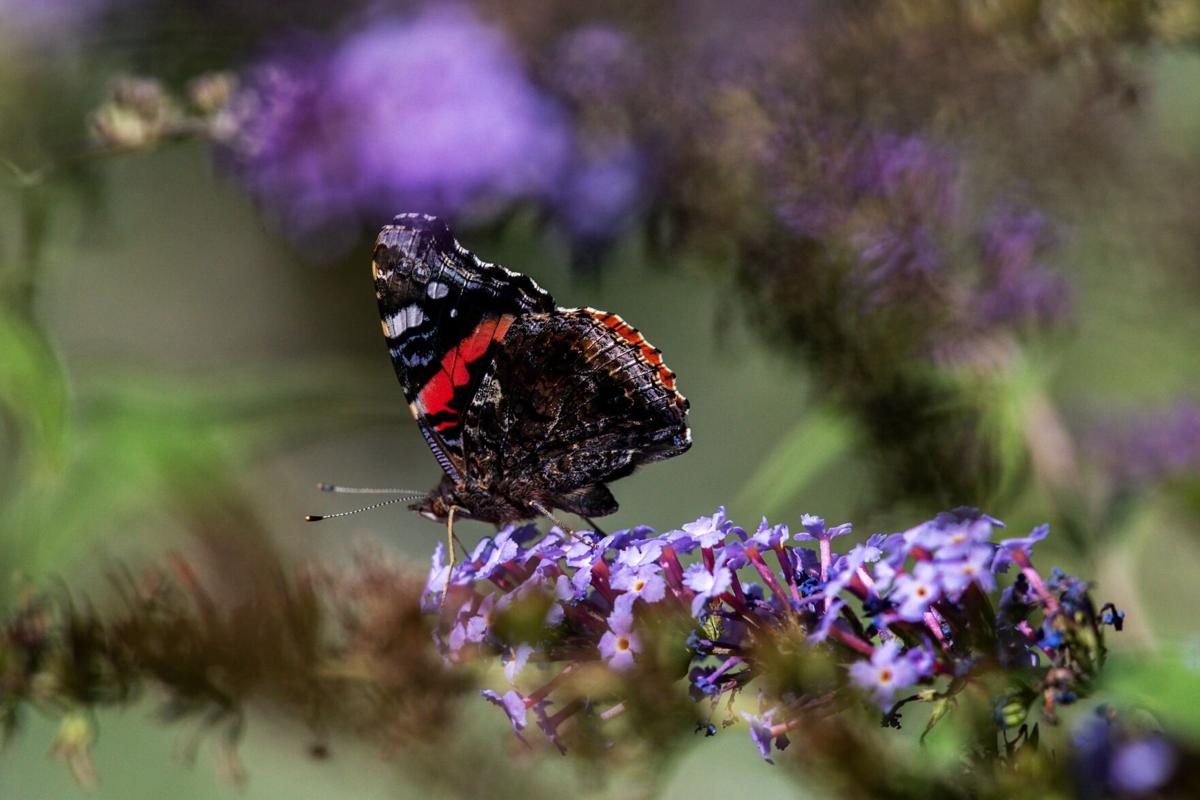 A red admiral butterfly rests on a flower in the pollinator garden. 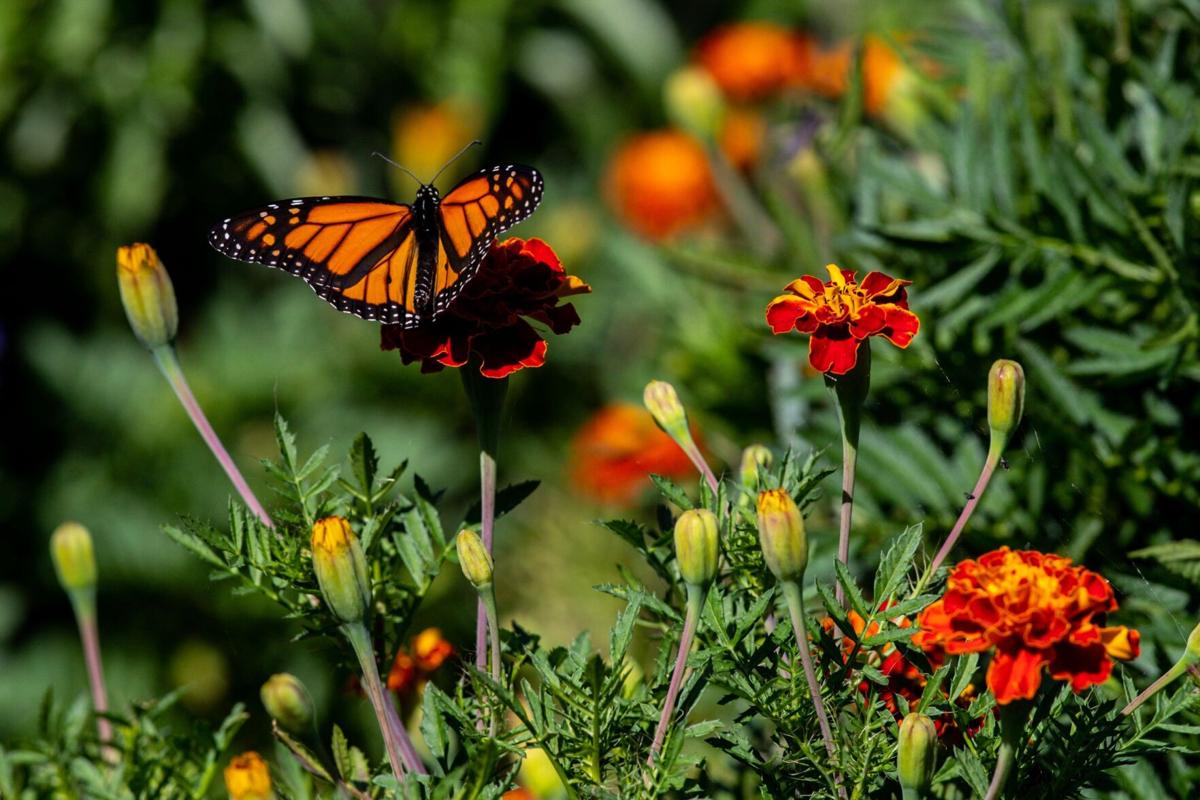 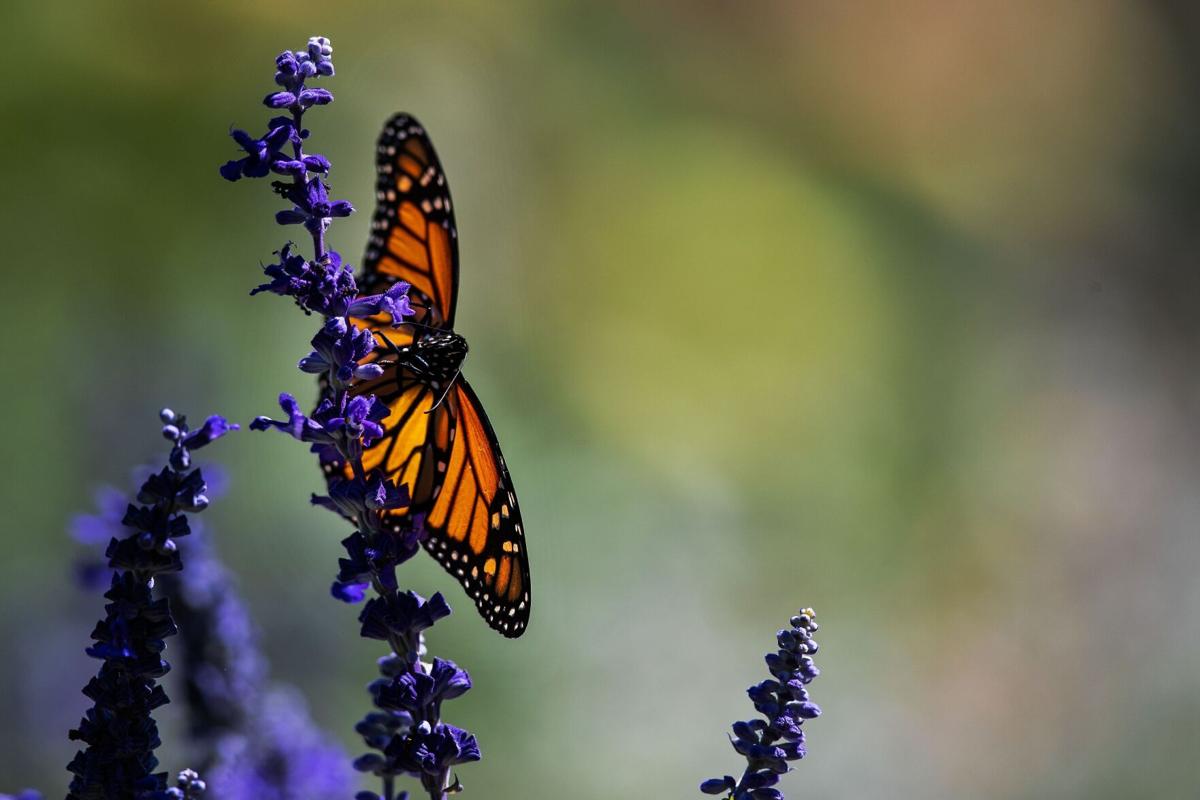 A mix of perennials and annuals attracts a monarch butterfly to the garden. 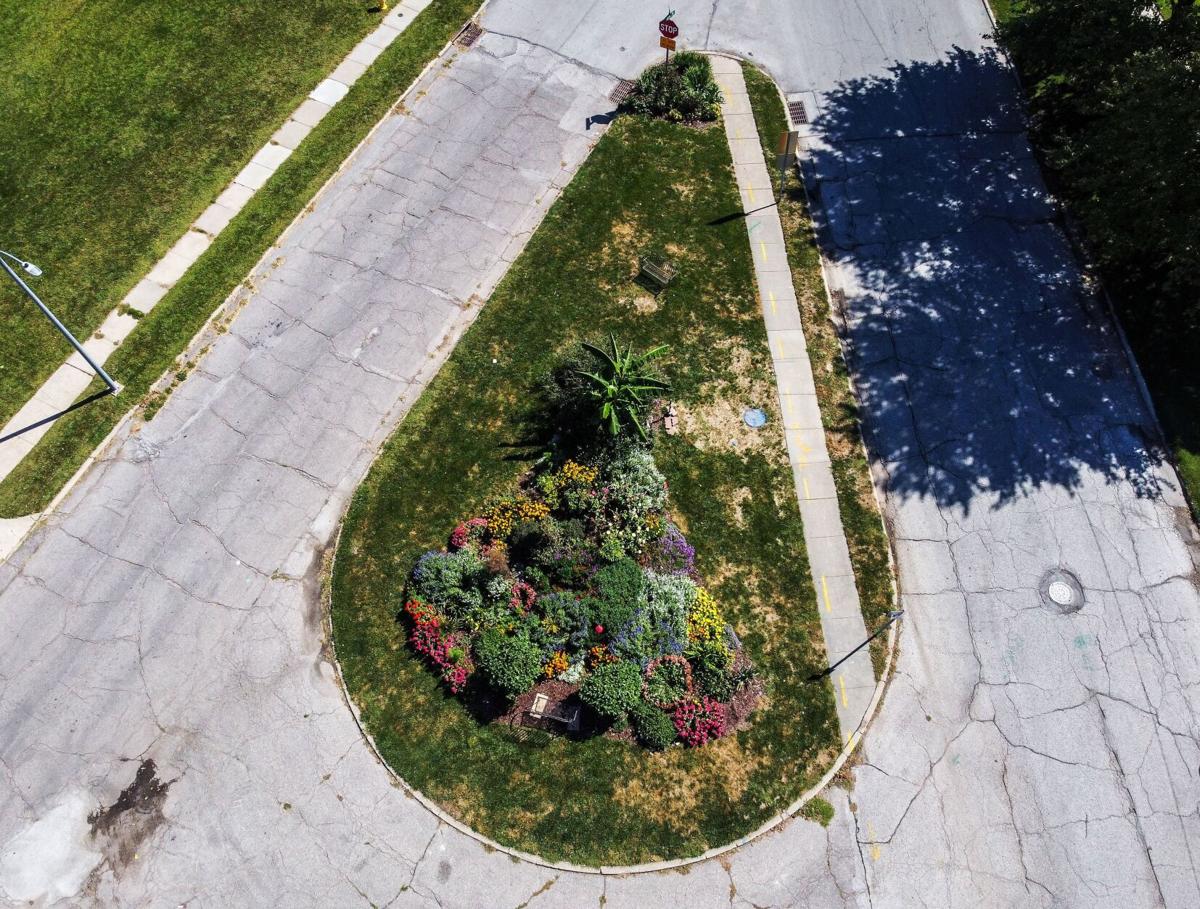 Flowers fill the pollinator garden on an island on the north end of Minne Lusa Boulevard.

It was supposed to just be a new garden for pollinators.

But once a group of Minne Lusa neighbors got together to start planning, their ideas blossomed beyond bees, butterflies and birds.

They held a seed- and mud-ball-rolling party, started doing monthly trash cleanups and converted an overgrown, neglected entrance of the neighborhood into a day lily garden. Signs of sprucing up and down Minne Lusa Boulevard appeared.

“It’s been fabulous,” resident Nancy Smith said. “It just brought tremendous pride in the neighborhood. It brings happiness when you drive past.”

And, of course, pollinators are enjoying the mix of perennials and annuals in the large garden bed covering an island at the intersection of Minne Lusa Boulevard, Martin Avenue and Sharon Drive in north Omaha.

They’ve named it Sharon’s Garden in honor of Sharon Olson, who mowed the island and planted flowers there for years. Bill Earlywine began helping with mowing and Fred and Carol Richart with plantings in the past few years.

In March, Beth Richards read an article in The World-Herald, a call to arms to help the declining numbers of monarch butterflies. She called Olson, wondering if the island she’d been caring for so long might be the perfect spot for a pollinator garden.

Richards then asked Smith if she would head up a group of people who had nice gardens or liked growing plants. About 10 joined the effort.

“It took a lot of work,” said Smith, who, with husband Kevin, used a sod cutter to get rid of the grass and then roto-tilled the new bed.

Neighbor Sherry Rydberg, the former director of the Carter Lake Parks and Recreation Department, was asked to do a layout and come up with a plant list. Residents brought extras from their yards or from the store when they did their own flower shopping. Or just donated cash.

“I don’t think anyone else in Omaha has a banana tree growing in their garden, but it is huge,” she said.

The tree will be dug up and stored for the winter. Seeds will be collected soon to be shared with neighbors, and the plant list for next summer is already growing. A spigot has been installed on the island, so the women no longer have to lug water jugs.

Carol Richart called the whole effort “a near miracle.”

“It is amazing,” Rydberg said.

She and Olson did most of the watering and weeding over the summer. Richards said you’ll often see Olson sitting on a bench, enjoying the antics of the pollinators and birds the garden has attracted.

Many neighbors who walk or drive by stop to talk to whomever is working at the garden that day. Organizers hope children at the neighborhood school can visit and learn about pollinators. Their goal is to transform other islands on the boulevard, too.

“It’s given the neighborhood a place to sit and reflect,” Rydberg said. “It’s just a beautiful calming spot.’’

Have you ever seen a Taj Mahal haircut?

10 features people look for when buying a car

10 features people look for when buying a car

Why Americans are changing their home decor

Why Americans are changing their home decor

Drop in numbers a call to arms to help monarch butterflies

Individuals, businesses and educators all need to do their part to save the threatened insect, conservationists say.

Spread your science wings with these facts about monarch butterflies

Do you see the same monarchs every summer? What do they eat? Find out the answers to these questions and more.

Spreading her wings, Oakland woman followed her butterflies to Mexico

Two of the monarchs she had hatched in Oakland, Nebraska made it 1,786 miles away to the Monarch Butterfly Biosphere in Michoacán, Mexico.

Michael Pecha has planted about 90 species of native grasses and flowers on his Elkhorn property. He meticulously records everything he grows including if it’s native and where it originated.

The meadow, which stretches from 189th and Harrison to Y Streets, is again ablaze with flowers. This summer, it’s no longer just yellow.

Need to replace a tree lost during Omaha's storms? Fall can be the best time to plant one

Even though it seems like planting season is over, fall is a great time to replace a tree or just add a new one. Cooler weather and fewer insects give the new tree an easier time to become established.

Drips owner Tres Johnson said he lost about $5,000 in plants and other items after the heavy rain caused flooding. Customers who came in to buy plants and a fundraiser helped him recoup his losses.

What's in store for the future of Omaha's parks? Three leaders in the local parks scene discuss their hopes and visions.

Did you know plants can get stressed out just like you? That’s why, the Nebraska Extension’s Kathleen Cue said, we’re seeing spring blooming plants like lilacs flowering again.

A monarch butterfly and bumble bee jostle for the same flower in the Minne Lusa pollinator garden. 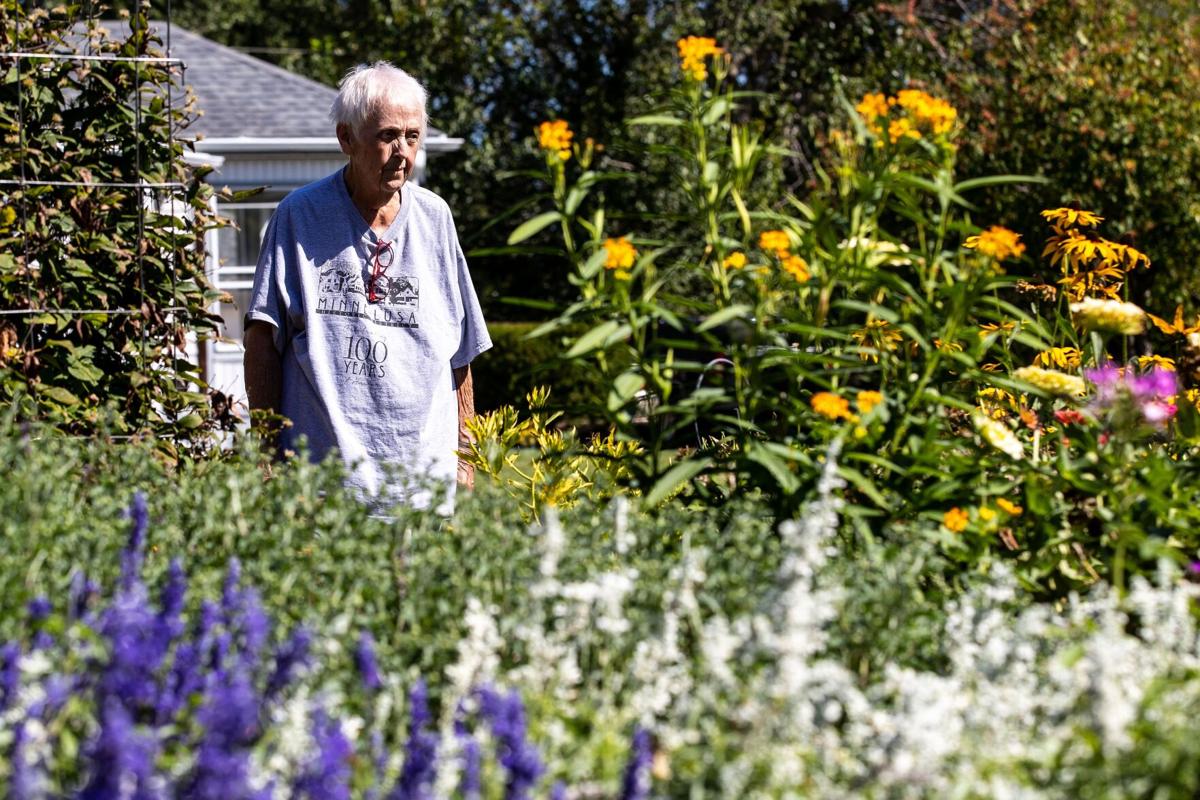 Sharon Olson looks over a garden she helped to create on an island on the north end of Minne Lusa Boulevard. She mowed and cared for plants there for years before it became a pollinator garden. 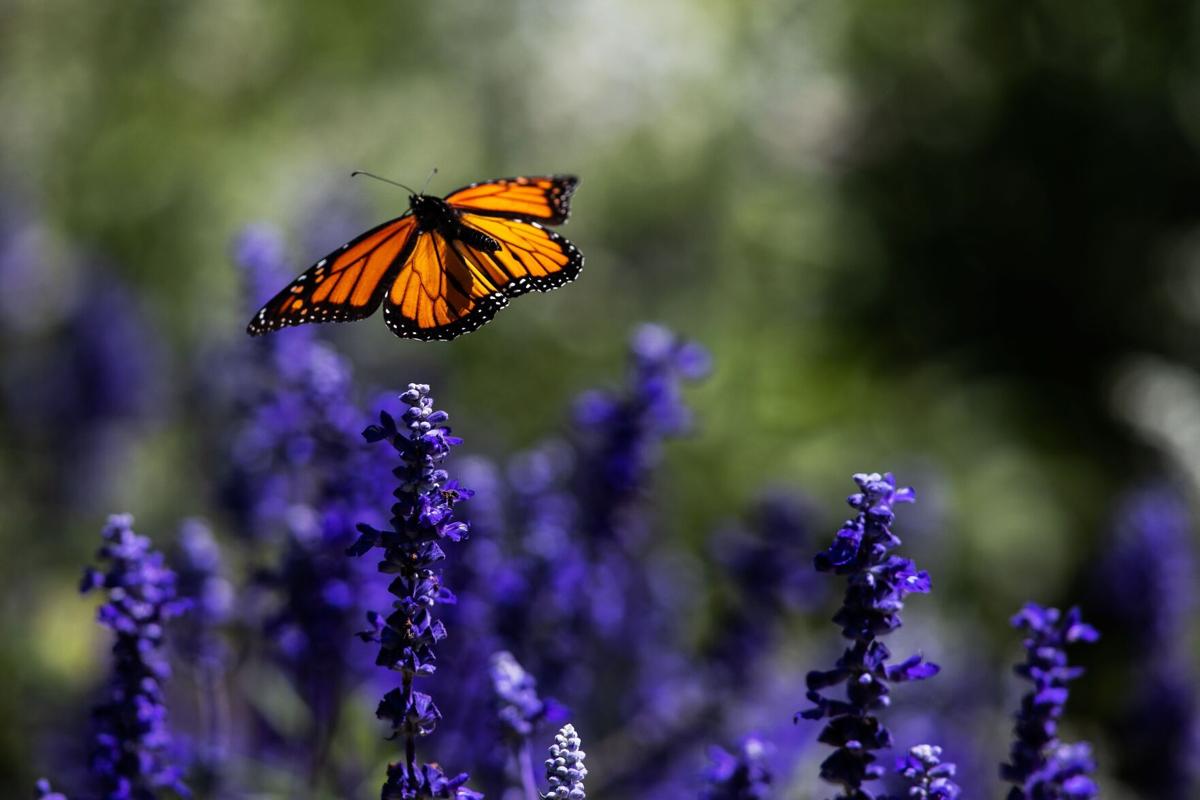 A monarch butterfly flies through the pollinator garden. It also attracts bees and birds. 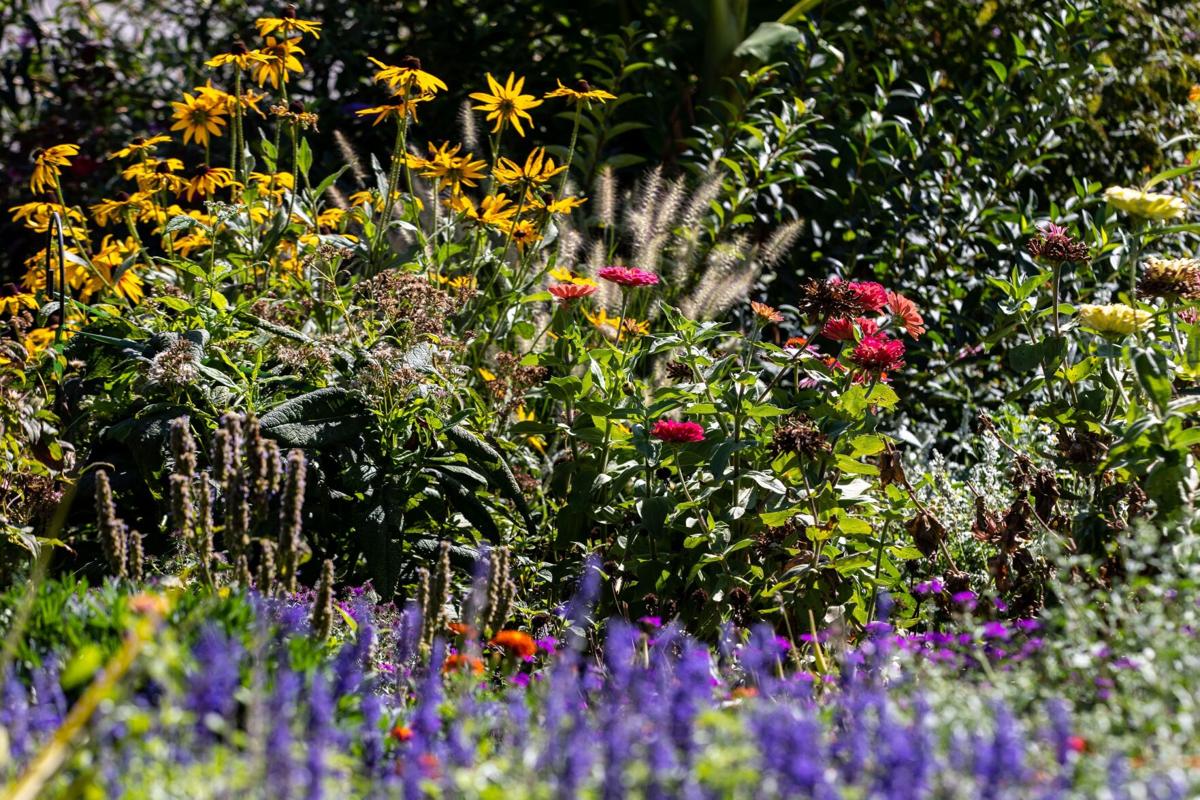 Many types of flowers are in full bloom. Some neighbors donated them from their yards or bought extras for the garden when they did their own flower shopping. Others just donated cash.

A red admiral butterfly rests on a flower in the pollinator garden. 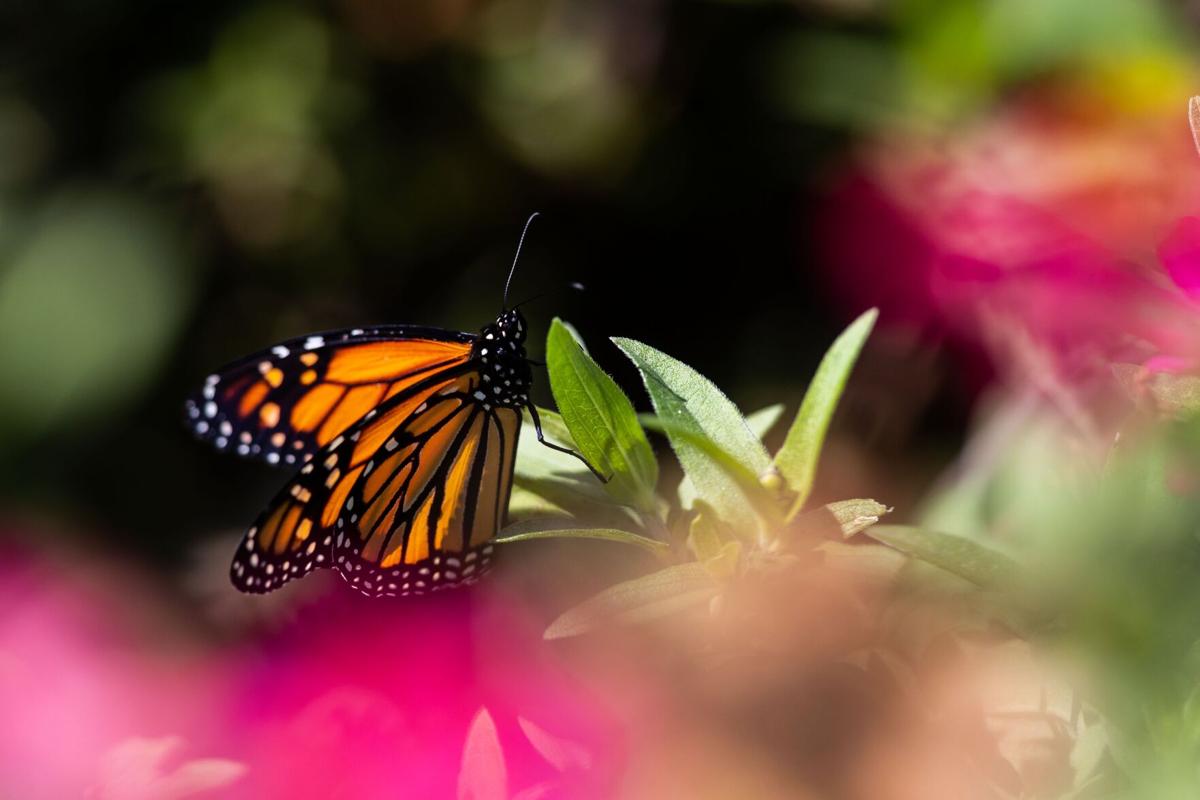 A monarch butterfly is among the visitors to the pollinator gardens. Neighbors are also enjoying the calm atmosphere.

A mix of perennials and annuals attracts a monarch butterfly to the garden.

Flowers fill the pollinator garden on an island on the north end of Minne Lusa Boulevard. 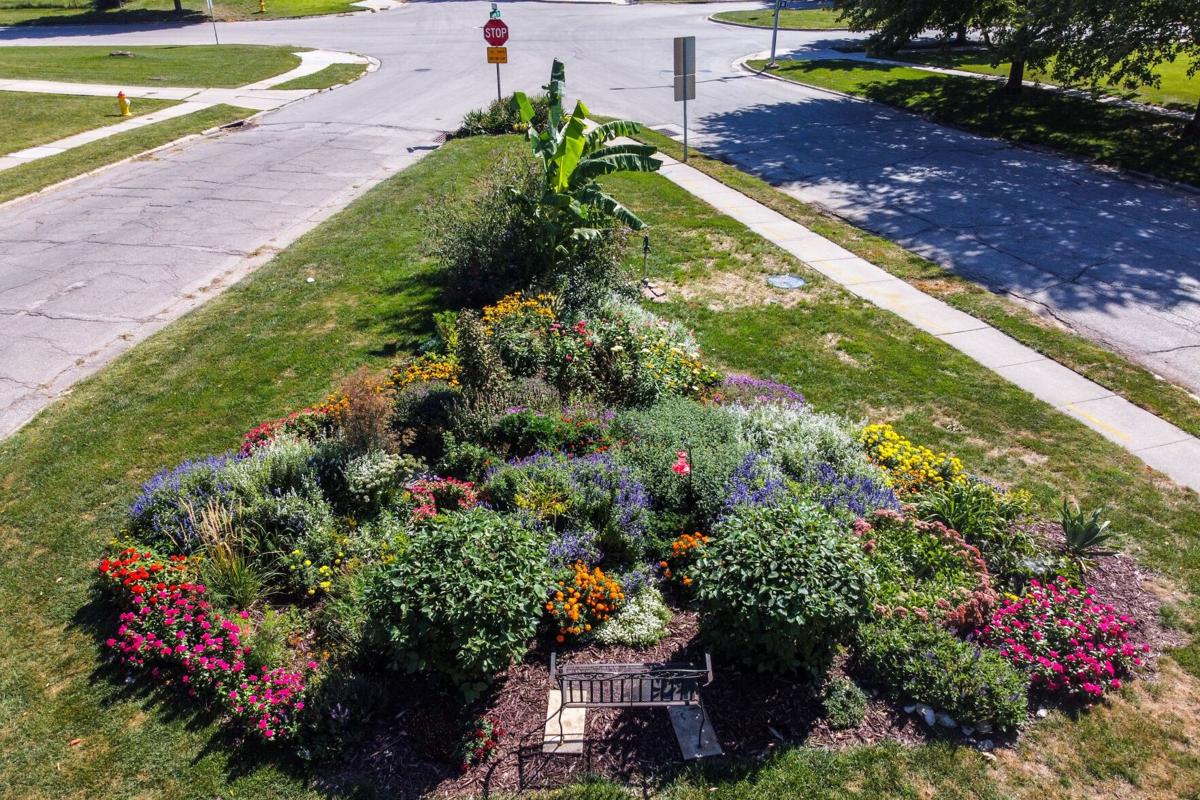 Flowers fill a garden on an island on the north end of Minne Lusa Boulevard. There's even a large banana tree. 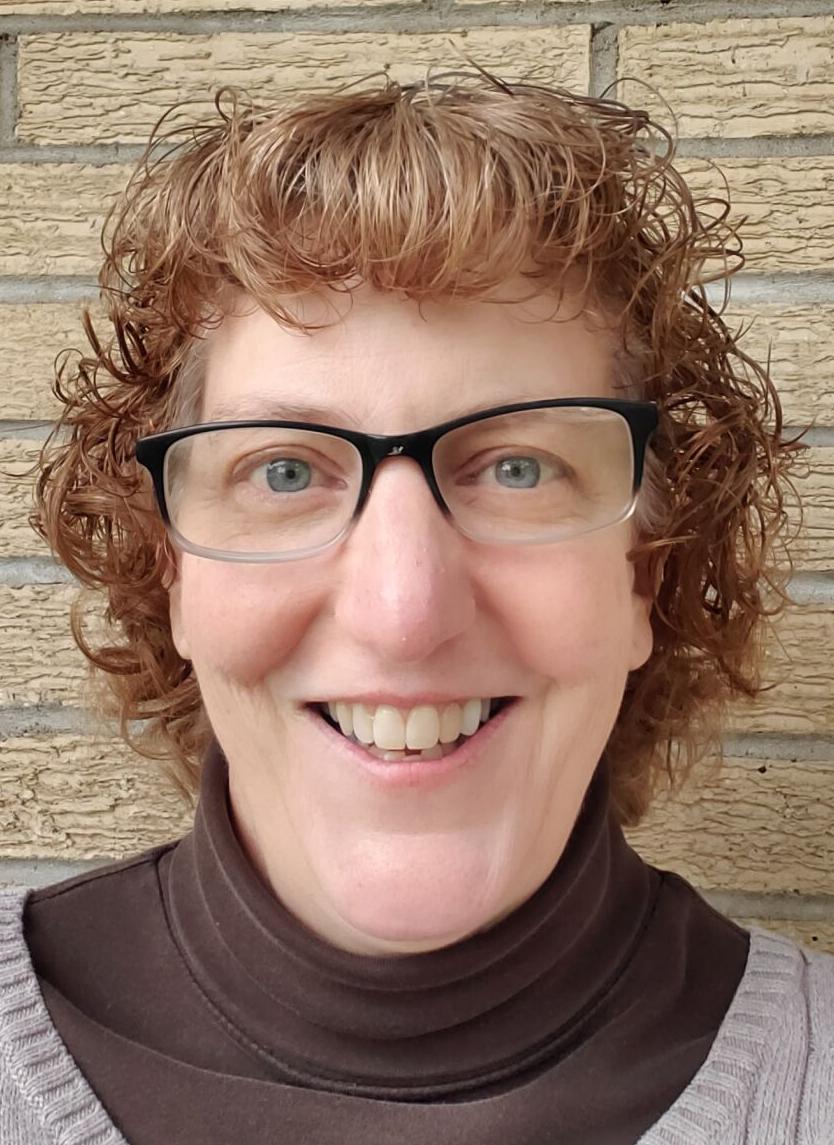