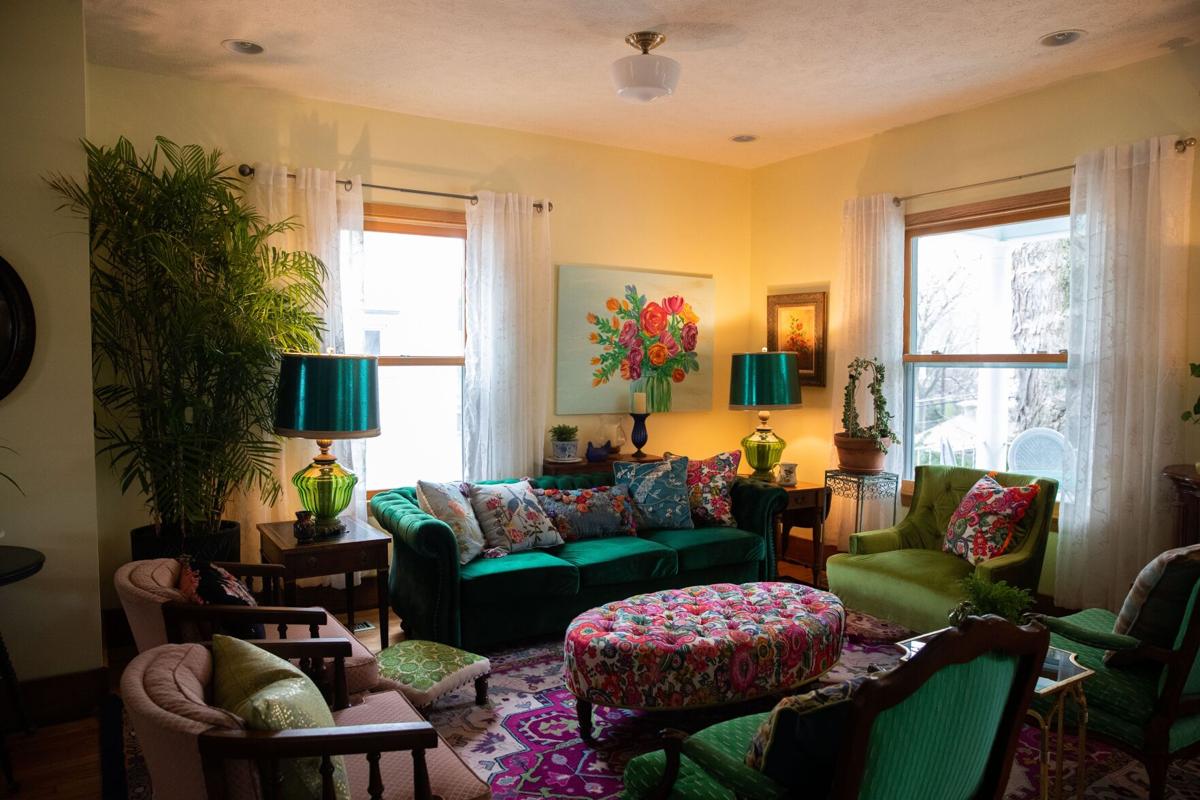 The front room at the Hepburn home. Megan loves using color; she thinks it’s more fun for daughters Harriet and Georgie. She painted the flower picture. 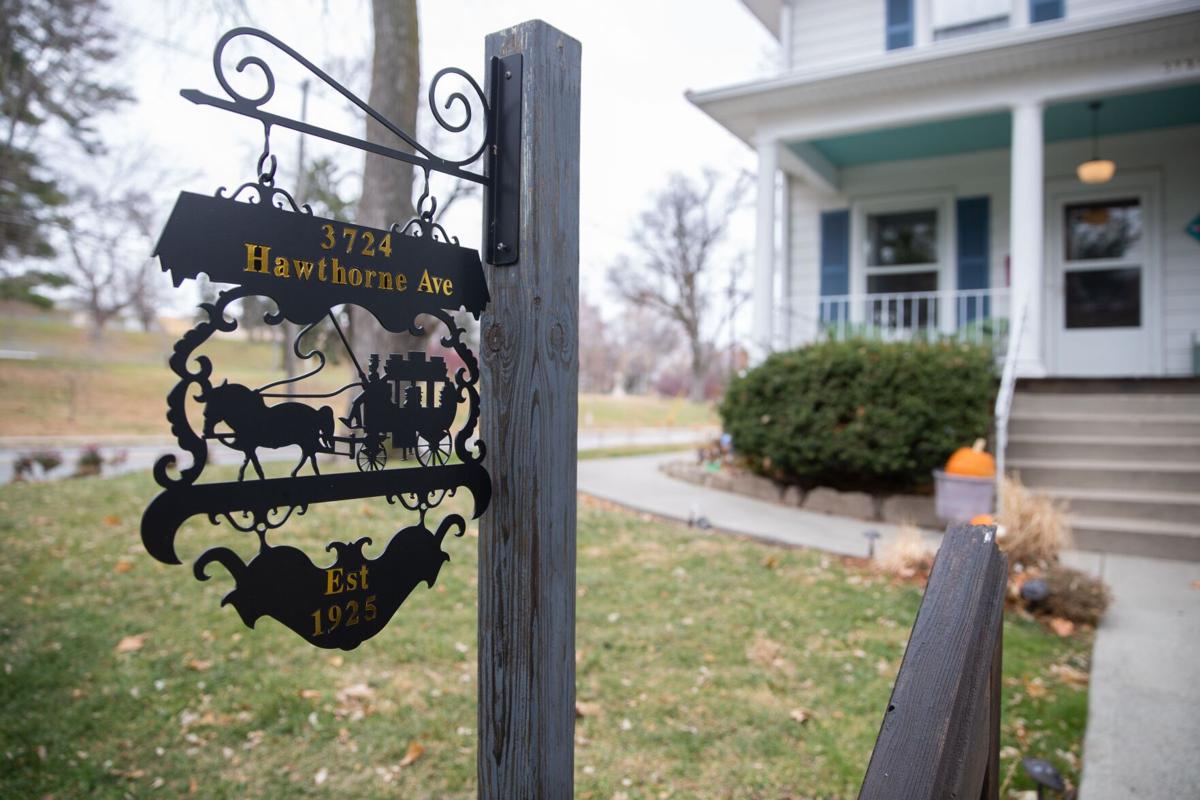 An address marker at the Hepburn home. 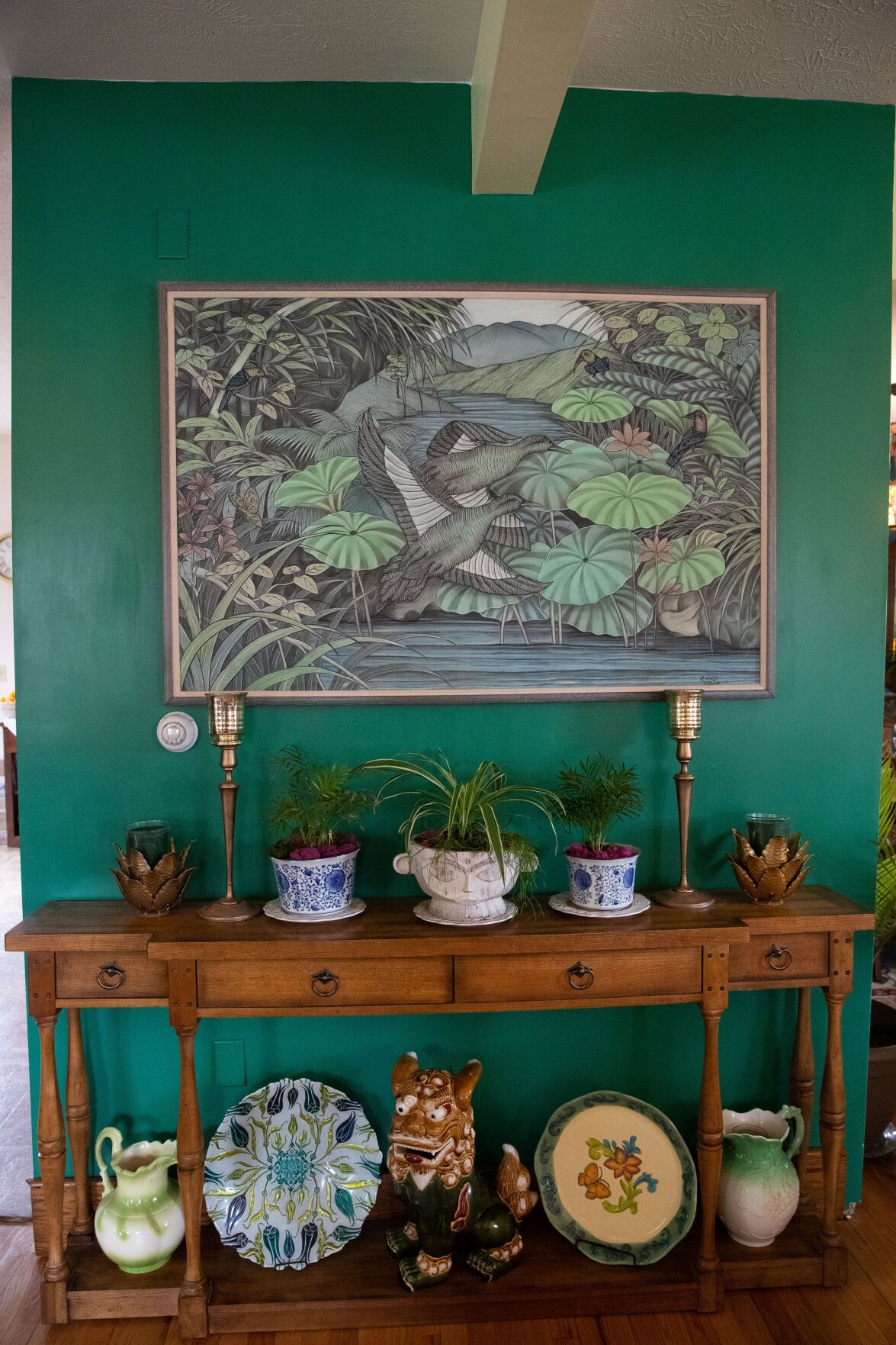 Megan bought this painting from Posh Peacock, a consignment store. It was done by an artist from Vietnam.

The handicap bathroom built in the middle of the living room didn’t scare them off.

Neither did the office and laundry room in the dining room.

Megan Hepburn and Pat Mcilvain decided to take a chance on a house in the Bemis Park neighborhood. A great price and proximity to the Interstate made it the perfect choice.

“I think at this point, my husband trusts me. My mom knows I’m pretty capable,” Megan said. “I don’t think anybody thought I was too crazy.”

The couple had been searching for more than a year for a house for them and daughters Harriet, 6, and Georgie, 4.

Pat lived in an old home in Pittsburgh. Megan grew up in Dundee and wanted her children to attend school there. But when they decided to leave west Omaha, there was little to offer in the midtown neighborhood, especially at their price point.

Own a fixer-upper? Here's where to turn for help with specialized renovations, repairs

When Megan got assurances that her daughters could still go to school in Dundee, Bemis became an option. Because she had lived in a similar four square, with parents who were always doing renovations, she wasn’t frightened by a fixer-upper.

The house was a home for people with developmental disabilities for several years, hence the changes to the floor plan to accommodate the residents. Once renovations started, it took four dump loads to clear out the structure.

Pat and his friend Jack Robins, who owns All New Home Improvement, tore down several walls to restore the original layout. The maple floors, which had been hidden by a subfloor and linoleum, were patched and restored by Matias Lucero.

The floors are the only original detail left in the home, but the couple have been working to add character.

Megan drove six hours to Iowa to purchase a pair of ornate wood doors that D.E.W. Manufacturing in Council Bluffs was able to adjust to fit. Baseboards found at A&R Salvage and Recycling were installed by Jay Axelrod, who also hung their shutters.

Megan painted every room except the kitchen and upstairs bathroom. The outside was power-washed, and the shutters were installed. The porch and deck floors were stained, and the porch columns and deck railing were painted.

In August, when they moved in, there were only two yew bushes in the front yard and daylilies along the back fence.

“We planted five trees, and I don’t even know how many bushes and perennials,” Megan says. “I can’t wait for next spring to see what comes back.”

They didn’t have to address items like electricity and plumbing. The bathrooms and kitchen were redone in the 1990s, so those rooms weren’t a priority, although they’re still on the renovation list. Megan would prefer to do the kitchen in the summer, when they can use the grill to cook meals.

The things remaining to be done feel daunting at times, and Megan said she was feeling frustrated until Robins, their contractor friend, showed up and said he couldn’t believe their progress.

“I get kind of focused on how much is left to do,” she said. “I just needed to hear that. He was just reminding me how much has been done.”

Pat commutes to a job in Lincoln, and Megan works part time and is restarting her art career while Harriet learns remotely. But she has still found time to be involved in Bemis Park concerns. She recently helped to get speed bumps installed along 38th Street. Some rezoning issues will be next.

They love the welcome they’ve found in the area off busy Cuming Street, with its mix of longtime residents and newcomers who are fixing up their houses.

“The neighborhood is kind of a hidden pocket back here. You come down into the park, and it’s really quiet and sheltered with all of the trees,” Megan said. “It’s kind of enchanting back here.”

Photos: Inside a Bemis Park fixer-upper

Photos: Inside a Bemis Park fixer-upper

Fun from top to bottom: A three-story playhouse in Bennington is a grandkid's dream

A couple's remodeling project took on a new dimension as a play village began to be imagined. The village includes a schoolhouse, veterinary clinic, pizza shop, bakery, museum and theater.

Omaha couple find 'everything' they wanted in their Dundee rental

Renovations took nearly a year, but after living there for several months, they remain satisfied with the whole-house transformation. “It’s like having a baby. I created this. Of course I love it.”

An Omaha couple's 1954 home with a sun-infused porch will be part of the April 10 and 11 remodeled home tour sponsored by the Greater Omaha NARI organization.

The front room at the Hepburn home. Megan loves using color; she thinks it’s more fun for daughters Harriet and Georgie. She painted the flower picture.

An address marker at the Hepburn home.

Megan bought this painting from Posh Peacock, a consignment store. It was done by an artist from Vietnam.