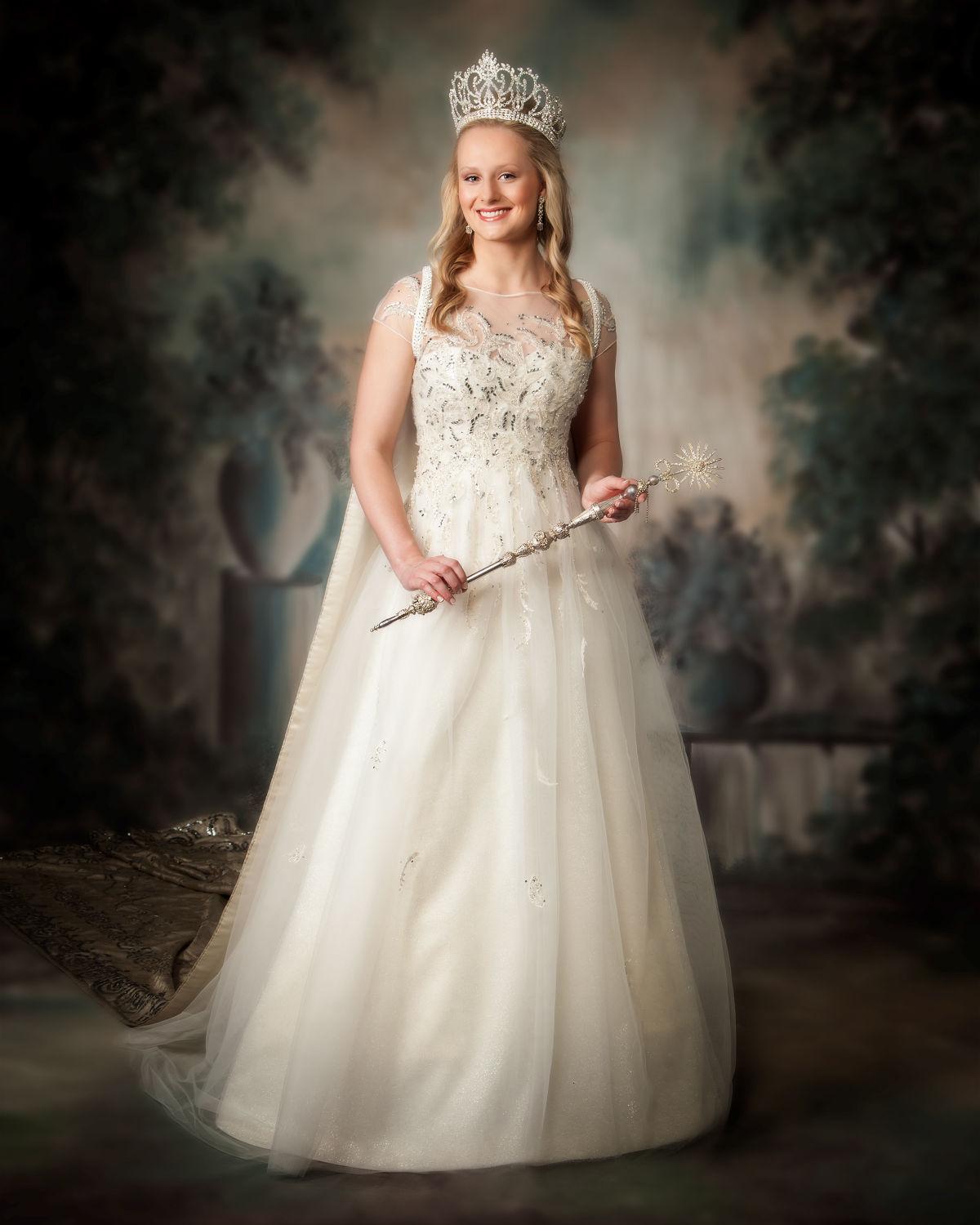 Molly Rose Kroeger, 21, daughter of Terry and Jackie Kroeger of Omaha, was crowned the 119th Queen of Aksarben on Oct. 17. 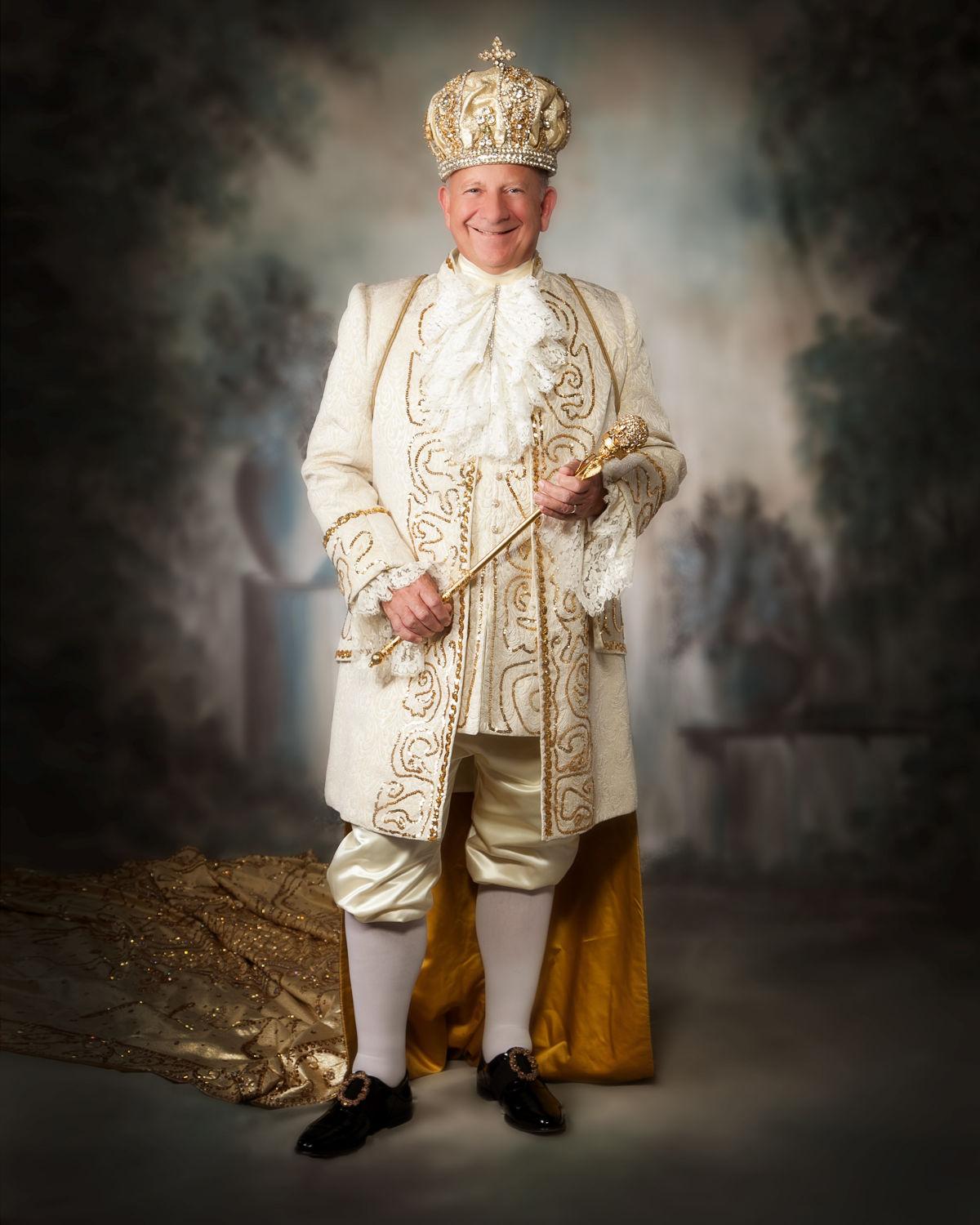 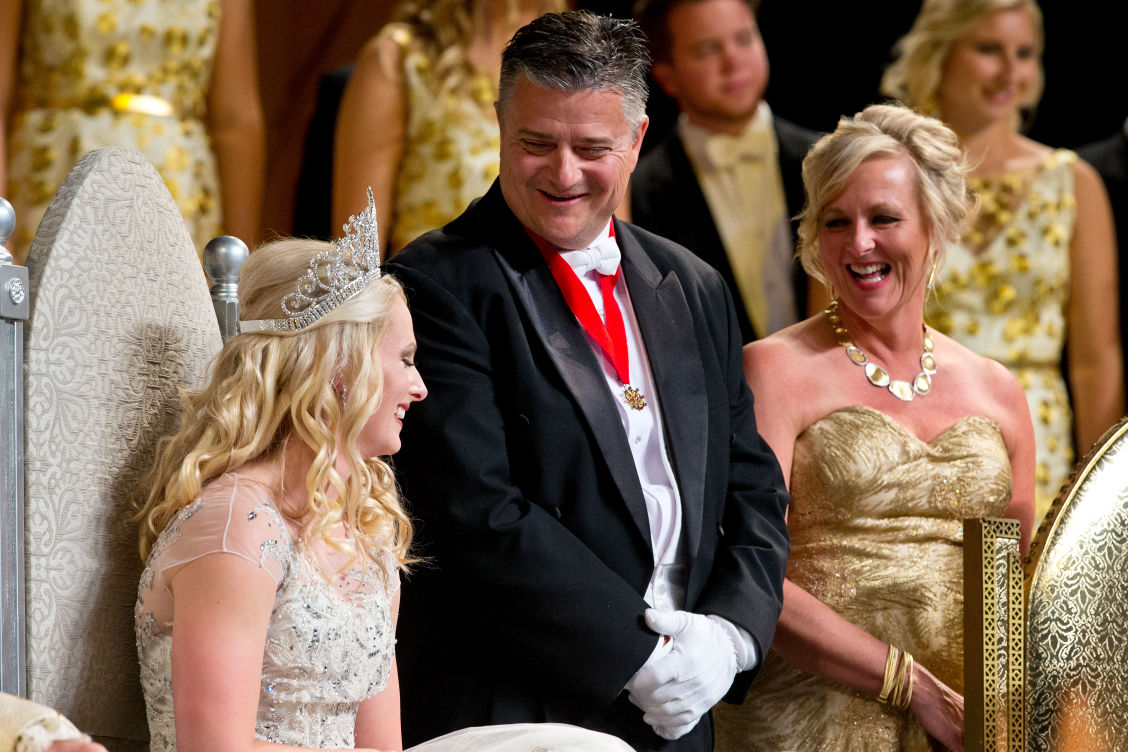 Molly Rose Kroeger with her father, Terry, and mother, Jackie, after Molly was crowned queen at the Aksarben Coronation & Scholarship Ball at the Baxter Arena on Saturday. 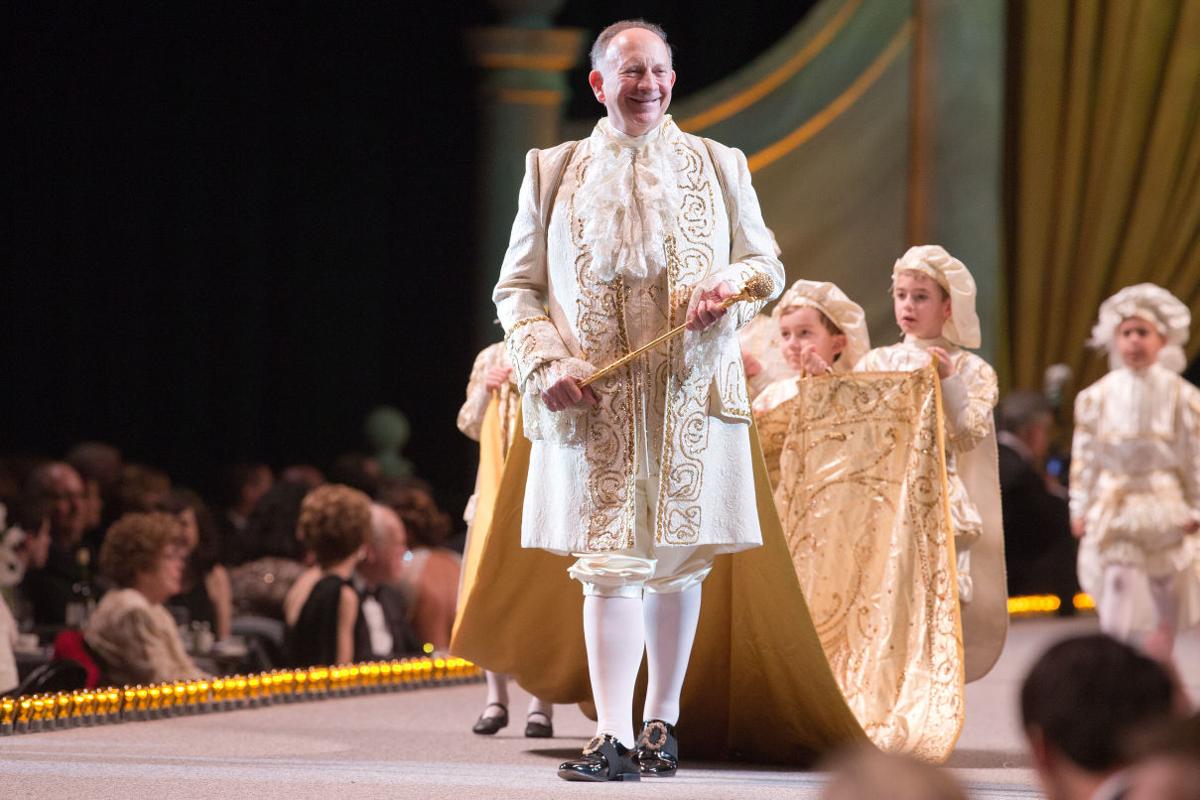 Jack Koraleski was crowned King Aksarben at the Aksarben Coronation & Scholarship Ball at the Baxter Arena on Saturday.

In a homecoming of sorts, the Aksarben Coronation & Scholarship Ball played out Saturday inside the just-opened Baxter Arena. The venue south of Center Street at 67th Street is across from the site of the event for many years, before the racetrack and Coliseum were torn down and Aksarben Village took root.

By the end of the evening, the mythical Kingdom of Quivira had new monarchs: John “Jack” Koraleski as King Aksarben 119th and Molly Rose Kroeger as Queen Aksarben 119th.

Koraleski, 65, is the retired executive chairman of Union Pacific Railroad. His wife, Stephanie, is a cancer center psychologist.

Kroeger, 21, is a daughter of Jackie and Terry Kroeger of Omaha. Her father is president and CEO of BH Media Group, a subsidiary of Berkshire Hathaway, and publisher of the Omaha World-Herald. Her mother is an active community volunteer. Molly will graduate in the spring with a nursing degree from Xavier University.

Addressing the audience of nearly 2,000, the queen praised Koraleski and his wife and then said: “Together we will do what we can to strengthen the traditions of Aksarben.”

[More photos from the ceremonies]

The king, referring to event’s focus on fundraising for scholarships, said: “Our real purpose here tonight is to change lives.” As a 1968 recipient of an Aksarben scholarship, he added, “For me, tonight, it’s kind of come full circle.”

Few spaces in the new arena went unused during the coronation, which celebrates respect for education, the importance of community and a desire to improve the collective quality of life in the Omaha area.

Cocktails were on the concourse, which offered views of the competition ice and the community ice. Insulated covers atop the skating surfaces turned both of the arena’s largest spaces into elegant dining rooms that accommodated the majority of dinner guests.

Floor Committee members and their spouses ate in the Club Lounge, with its sweeping view of the main arena.

In the top-level Press Room, the princesses and escorts dined together and had a bird’s-eye view of the stage until they were called to it later in the evening.

The stage set reflected the evening’s theme, “A Sky Full of Stars.” Inspired by the Coldplay song of the same name, the theme carried through the evening. Fiber-optic black curtains on the stage gave the appearance of twinkling stars, and much of the music had light-related titles and lyrics, such as “Firework,” “Shooting Star” and “Stardust.”

The lead-up to the crowning of the new monarchs acknowledged Aksarben’s 120-year history and recognized the organization’s newest endeavors.

For example, a video that showcased past coronations was followed by Aksarben/Horatio Alger Career Scholarship recipient Terrance Prater singing the national anthem. Prater, a Metropolitan Community College student, is among the first scholars in a program that Aksarben’s 2014 king, Mike Yanney, announced during last year’s coronation.

The pages took up all corners of a visiting team locker room, in some cases situating themselves in cubbyholes designed for equipment storage. Once changed from dress clothes into their Renaissance-style costumes, the pages occupied their time by coloring, watching a video and playing card games.

The ceremony started a bit late due to the logistics of moving the 900 diners from the community ice to the fan seating in main arena.

As the National Anthem was sung, some in the crowd gasped as a bald eagle was released and flew from the stage along the promenade to the north portal at the other end of the arena.

To “10th Avenue Freeze Out” by Bruce Springsteen, the Aksarben governors assembled and walked down the promenade, introduced by announcers John Lee and M. Michele Phillips.

The audience then acknowledged the 19-member Aksarben Women’s Ball Committee, which plans the coronation and scholarship ball. “We Are Family” by Sister Sledge played as committee members filed in from behind the stage, stood together, then walked down the promenade.

Jones announced that the goal for the Aksarben Scholarship Fund had been exceeded this year. Little then thanked scholarship donors for their support.

The ball is the primary fundraiser for the Aksarben Scholarship Fund, which provides money for 50 four-year college scholarships the Aksarben Foundation annually awards to Nebraska and western Iowa students in financial need who have overcome personal adversity. Each scholarship is worth $6,000, payable over four years. The amount awarded by the foundation is matched by the University of Nebraska system, Creighton University, College of St. Mary, Bellevue University and Metropolitan Community College.

Next came introduction of the princesses and their escorts, who appeared from the right and left sides of the stage, filling it until introductions began. As the couples were introduced, they walked down the promenade.

They were followed by a procession of the pages — described as “the irrepressible subjects of the kingdom” — and the heartland princesses and their escorts.

After a call for a fanfare heralding the new monarch, Koraleski appeared from behind a curtain accompanied by standard-bearers, honor pages, a crown bearer, ring bearer, train bearers, an attendant and the boy pages.

Also appearing was his wife, who stood near the thrones and received a flower from the new king.

The prime minister crowned Koraleski “in the name of the mighty Knights of Aksarben” and the archbishop placed a ring on the king’s finger.

A similar process unfolded for the queen, who was accompanied by her parents, a standard-bearer, crown bearer, ring bearer, train bearers, an attendant and the girl pages.Molly Kroeger presented her mother with a flower.

At the conclusion of the coronation, the festivities moved to the community ice, which had been transformed from dining room to ballroom, and guests danced to tunes by Finest Hour.

The sleeveless gown worn by the princesses and heartland princesses features a jewel/bateau neckline with a low back, and an ivory underlay with a sheer overlay embellished with gold detail stitching. The ornate gilded overlay creates a three-dimensional effect throughout the gown. A gilded band surrounds the waist. A full-length hem is part of the A-line skirt.

Don O’Neill of THEIA designed the princess gowns. As Royal Court designer for 2015, O’Neill used the Greek goddess Theia for inspiration, just as when he introduced the THEIA collection in 2009.

Tilly, the Royal Court Couturier for 2015, has been couturier to the queen and court of princesses on eight prior occasions.

Volunteer service. Commitment to community. Philanthropy. Youth development. Concern for the disadvantaged. These are key themes each year for the Aksarben Coronation and Scholarship Ball.

The 2015 Aksarben Coronation & Scholarship Ball is Oct. 17. Get to know the scholarship winners, honorees and royal court before the big night.

More photos from the ceremonies

Aksarben queen intent on making career of caring for others

On Saturday night Molly Kroeger was recognized for her volunteer work and her family’s record of service and leadership when she was crowned the 119th queen at the Aksarben Coronation and Scholarship Ball at the Baxter Arena.

Aksarben king and his wife, couple of ‘scholarship kids,’ want the same for others

Freshly graduated with a business degree from the University of Nebraska at Omaha, John “Jack” Koraleski didn’t want to stay in his hometown.

Cities with the most roommates

Cities with the most physically demanding jobs

Cities with the most physically demanding jobs

Chief adviser to Operation Warp Speed: We could have herd immunity by May 2021

Chief adviser to Operation Warp Speed: We could have herd immunity by May 2021

Molly Rose Kroeger, 21, daughter of Terry and Jackie Kroeger of Omaha, was crowned the 119th Queen of Aksarben on Oct. 17.

Molly Rose Kroeger with her father, Terry, and mother, Jackie, after Molly was crowned queen at the Aksarben Coronation & Scholarship Ball at the Baxter Arena on Saturday.

Jack Koraleski was crowned King Aksarben at the Aksarben Coronation & Scholarship Ball at the Baxter Arena on Saturday.