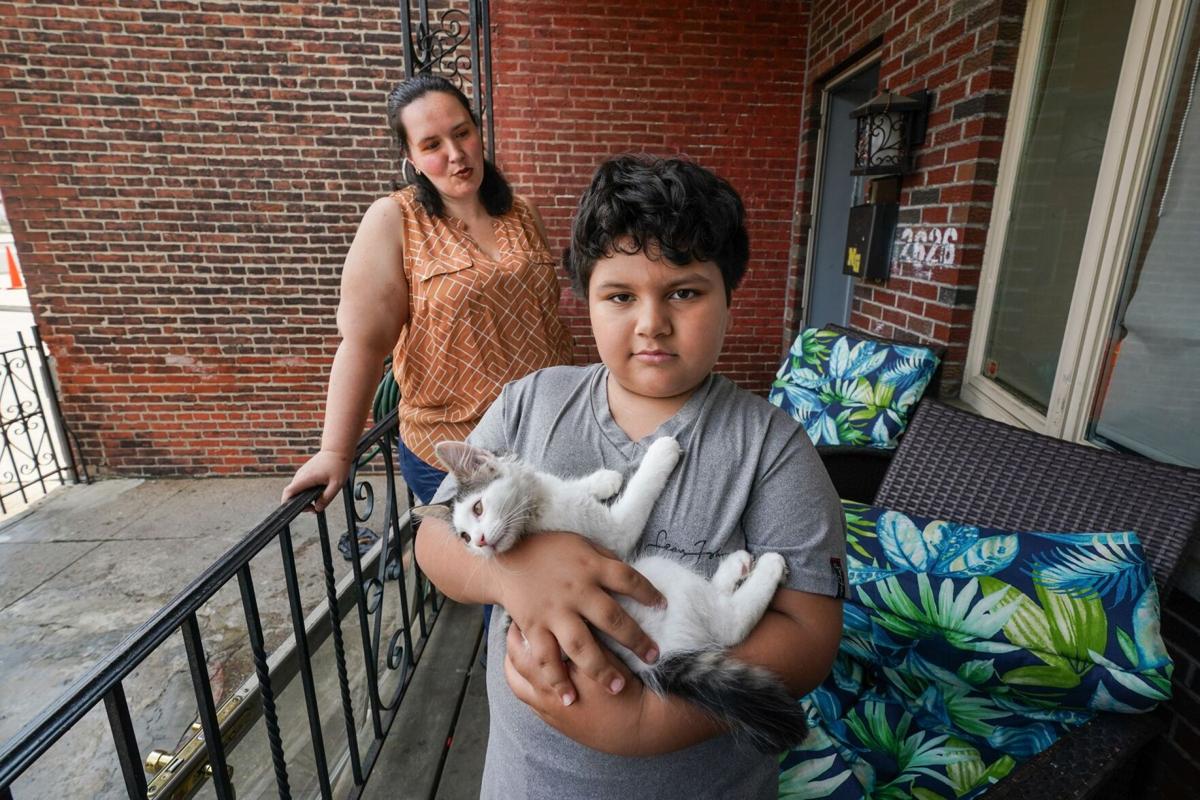 Georgina Rupnarine and her son, Ryan, shown on their Philadelphia porch holding a kitten named Thor. 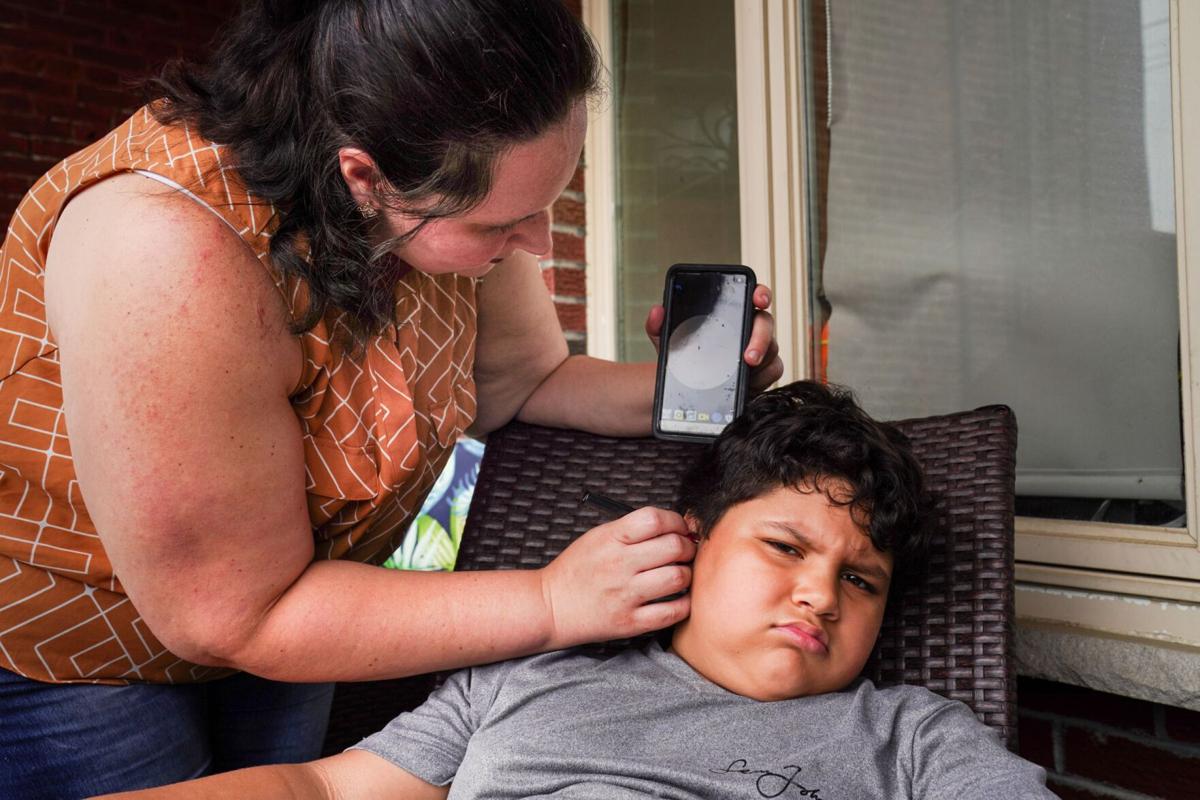 Georgina Rupnarine, left, demonstrates an app and camera that she uses to view the inside of her son Ryan's ear and ear tubes, saying that the device is very helpful for cleaning the ears, in Philadelphia. Ryan, 7, suffered through a year and a half of monthly ear infections.

PHILADELPHIA – What is that on Ryan’s nose? Ringworm?

The bumpy red rash didn’t seem to bother the 5-year-old, but his mother, Georgina Rupnarine, of Philadelphia, brought him to see an ear, nose and throat specialist.

The doctor didn’t know what to make of the rash, but as part of his routine examination, looked in Ryan’s ears and diagnosed him with an ear infection.

The antibiotic the doctor prescribed for the ear infection also cleared up the nose rash. But the next month, both were back.

The pattern continued, every month, for a year and a half: rash, ear infection, antibiotics, repeat.

Aside from the common cold, recurrent ear infections are the most common childhood illness. Though ear infections are most prevalent among kids under 18 months, older kids, like Ryan, get them, too. Under current recommendations, children who have three ear infections in six months or four in 12 months often have tiny tubes surgically implanted in their eardrums to prevent fluid build-up.

But a new National Institutes of Health-funded study by researchers at UPMC and University of Pittsburgh found that antibiotics were just as effective in treating ear infections as Tympanostomy tube placement. Most children with recurrent ear infections — except those with the most severe symptoms — could likely avoid ear tube surgery, which requires anesthesia sedation and has a small risk of long-term complications, and instead be treated with antibiotics with the same outcome, according to the study, which was published in May in the New England Journal of Medicine.

“It’s a very fast procedure and the duration of anesthesia is short-lived ... but if the procedure may not be needed, then it’s not needed,” said Alejandro Hoberman, the study’s lead author and director of the Division of General Academic Pediatrics at UPMC Children’s Hospital.

In practice, Hoberman said, the decision will likely come down to parent preference.

David Zwillenberg, chief of otolaryngology (which covers the ears, nose and throat) at St. Christopher’s Hospital for Children in Philadelphia, suspects he’ll still be doing a lot of tube procedures.

“If you’re the parent walking around at 2 in the morning, you and your spouse haven’t gotten much sleep the last few days, you start to feel pretty differently about this,” said Zwillenberg, who was not involved in the study.

Ear infections occur when fluid can’t drain from the inner ear and are typically brought on by another illness, such as a respiratory infection.

They are most common among children 6 to 18 months old, whose ear canal is horizontal and can become infected if the muscles needed to open it aren’t strong enough. Common symptoms include ear pain, especially when lying down; tugging at the ears; increased crying or fussiness; difficulty hearing; and fever. Children typically outgrow ear infections by age 2 or 3, as their cranial features develop to more closely resemble an adult’s.

Tympanostomy tube placement opens up the ear canal. The surgeon creates a tiny hole in the eardrum and inserts a tube smaller than a grain of rice, which allows the ears to drain more easily. The procedure takes about less than 15 minutes and is the most common surgery performed on children after the newborn period. St. Christopher’s implants tubes in the ears of about 620 children a year, and the Children’s Hospital of Philadelphia performs as many as 4,000 ear-tube surgeries annually.

The tubes can be used to treat any subsequent ear infections with topical antibiotic drops and typically fall out on their own after about a year and the hole closes naturally.

Serious complications are rare, though a small number of children develop scarring on their ear drums or experience long-term hearing problems if the holes created for the tubes do not close up.

Though brief, the surgery requires anesthesia — which can be nerve-wracking for parents and stressful for young children unaccustomed to medical settings.

The procedure is typically covered by insurance when recommended by a doctor, but can cost thousands for those who are uninsured and may lead to unexpected bills for those with insurance if the anesthesiologist happens to be out-of-network.

Antibiotics, taken orally, are another option for treating ear infections. Hoberman and his colleagues found that a 10-day regimen of antibiotics is as effective in knocking out an ear infection — no surgery, anesthesia or major medical bills.

However doctors and parents in the past often favored ear tubes over antibiotics because of concern that repeated use of oral antibiotics could make children more vulnerable to antibiotic-resistant infections.

The UPMC study dispels some of those concerns.

For two years, researchers followed 250 children aged 6 months to 3 years at hospitals in Pittsburgh, Washington, D.C., and Bardstown, Ky., who had been diagnosed with recurrent ear infections and who had received the pneumococcal vaccine. Some were treated with antibiotics when they developed an ear infection and others received ear tubes.

What’s more, children in the antibiotics group did not experience a higher rate of antibiotic-resistant infections.

Combined, the findings suggest that ear tubes are not necessary for most children, as antibiotics alone are an effective treatment for all but the most persistent ear infections, Hoberman said.

“For most children with recurrent ear infections, why undergo the risks, cost and nuisance of surgery?” he said.

Despite the study’s findings, Zwillenberg said families may decide tubes are the right choice if their child is in pain and they don’t want to wait for antibiotics to take effect, or if coping with a child’s ear infection has been especially disruptive to the rest of the family.

Many of Zwillenberg’s patient families can’t repeatedly take time off work for doctor’s appointments or to stay home with a sick child, and opt for tubes as a way to buy time until their child ages out of the ear-infection phase, he said.

He pointed to a note in the UPMC study that about 45% of the children assigned to antibiotic group ended up having ear-tube surgery. Of the 121 children in that group, 35 (29%) had tubes placed because they experienced ongoing severe ear infections. The study’s protocol called for children experiencing severe symptoms to be treated with tubes regardless of their original group assignment. Another 19 children (16%) had tubes placed at their parents’ request.

Only 10% of the children assigned to the tube placement group opted out of the procedure.

After a year and a half of monthly ear infections treated with antibiotics, Rupnarine was ready to try something else for her son Ryan, now 7.

“I get to a point with my kids if I can get something done, even if it’s surgical, to help them have a better life, they get it done,” she said.

The family had relatives who had received ear tubes, and after reading about the potential risks and benefits, Rupnarine decided it was worth a try.

Ryan had his tubes placed at the end of 2019 and hasn’t had an ear infection since.

"To be honest, my brain feels like it fractures every time I try to wrap my head around vacation days, teacher work days, scattered drop-off and pick-up times and all the different district rules."

‘Going to get worse.’ Family urges vaccines after teen dies of COVID-linked condition

Asking the bride to not post pictures of her parents speaking or standing next to each other at her engagement party is right up there with "Don't let your ex-girlfriend sign your yearbook."

How we survived three days without power — books, flashlights, long walks and a new appreciation for electricity

You don't realize how important power is to your day-to-day life until it's gone.

Fairytale Ball, live music, outdoor movies and 15+ other fun things to do this weekend

Looking for something fun and safe to do in the Omaha area this weekend? Check out these family-friendly suggestions, which take place July 22-25.

6 new board games this Omaha family can't get enough of

Thanks to summer, this family has brought back the board games. If you're looking for new games, here are six they're is loving right now.

Why I started tossing my kids' crappy toys

"Oh, no. Do forgotten toys live on in an existential purgatory once we’ve put them down and stopped playing with them?" This theory ate at me for years and stayed my hand when doing a toy room purge.

"I'm still trying to get her to poop outside, but I'm trying to find out how I should be handling her eating poop to hide it from me."

Ask the Pediatrician: Which insect repellent is best for children?

When there's a possibility of getting a serious illness such as Lyme disease from an insect bite, make sure you choose repellent that is effective. Here are some tips.

Georgina Rupnarine and her son, Ryan, shown on their Philadelphia porch holding a kitten named Thor.

Georgina Rupnarine, left, demonstrates an app and camera that she uses to view the inside of her son Ryan's ear and ear tubes, saying that the device is very helpful for cleaning the ears, in Philadelphia. Ryan, 7, suffered through a year and a half of monthly ear infections.