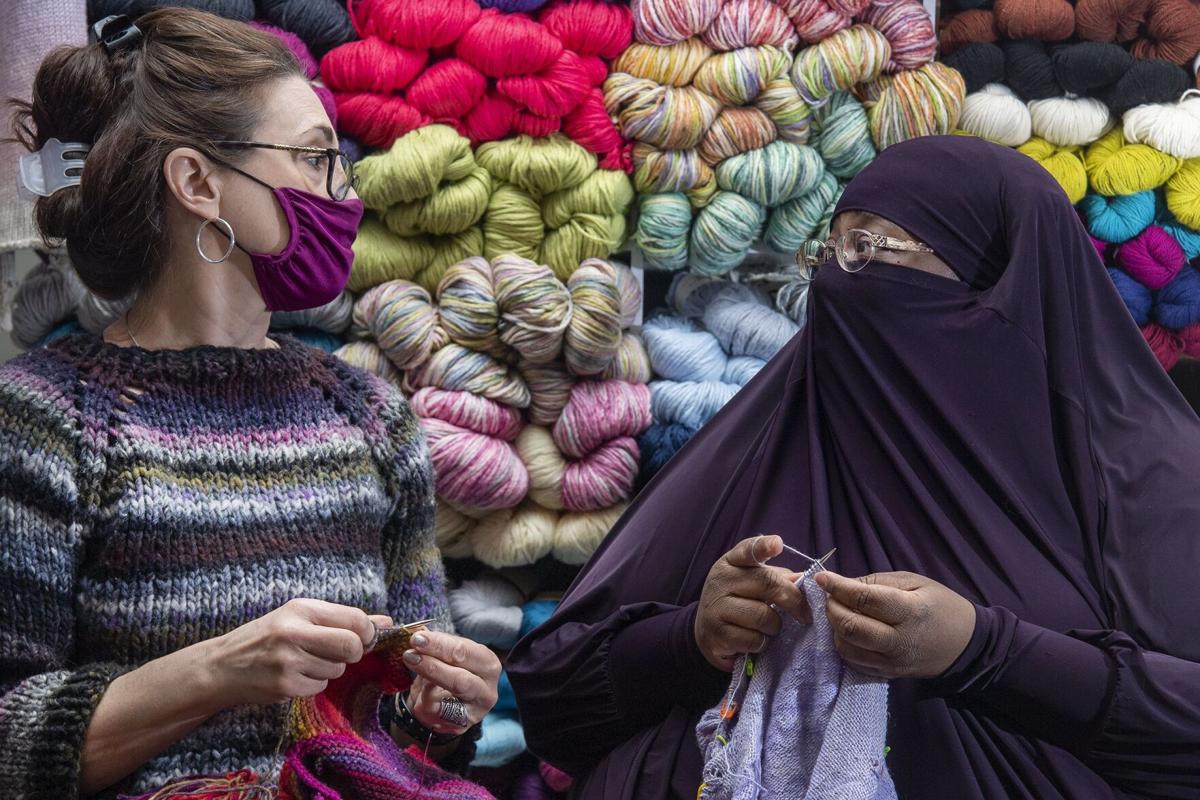 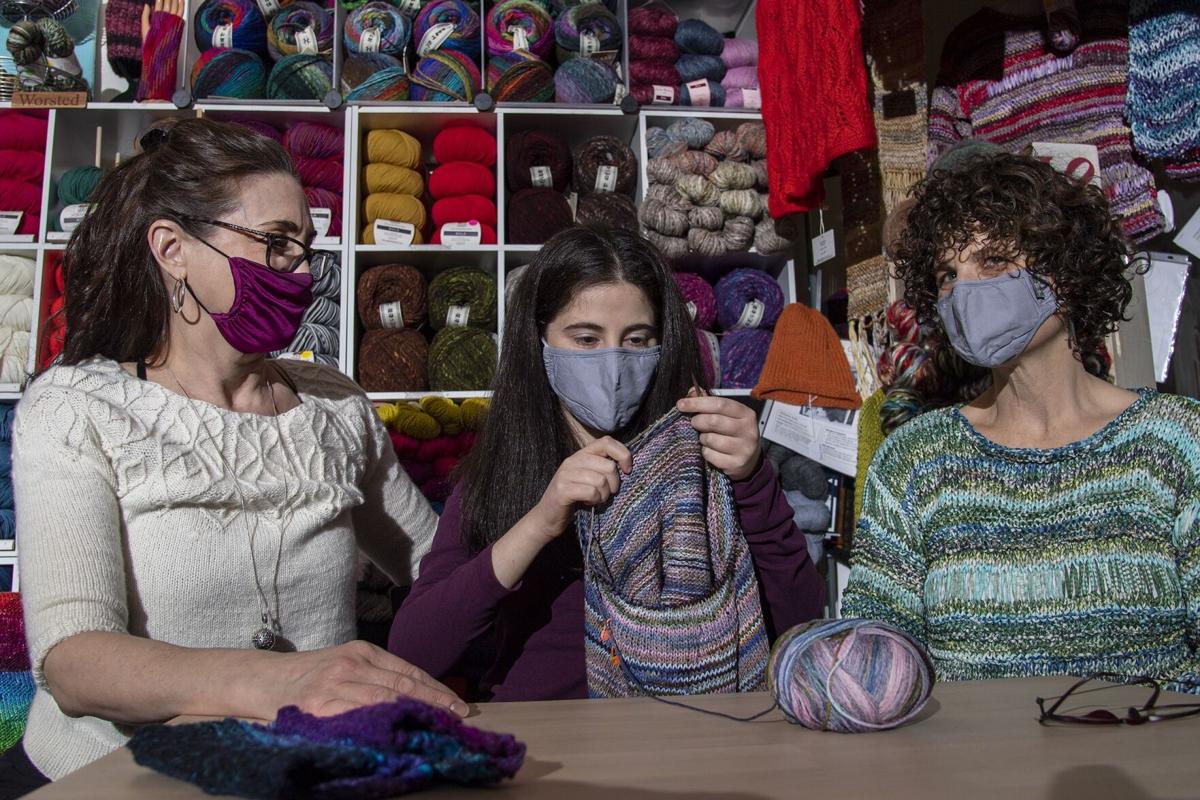 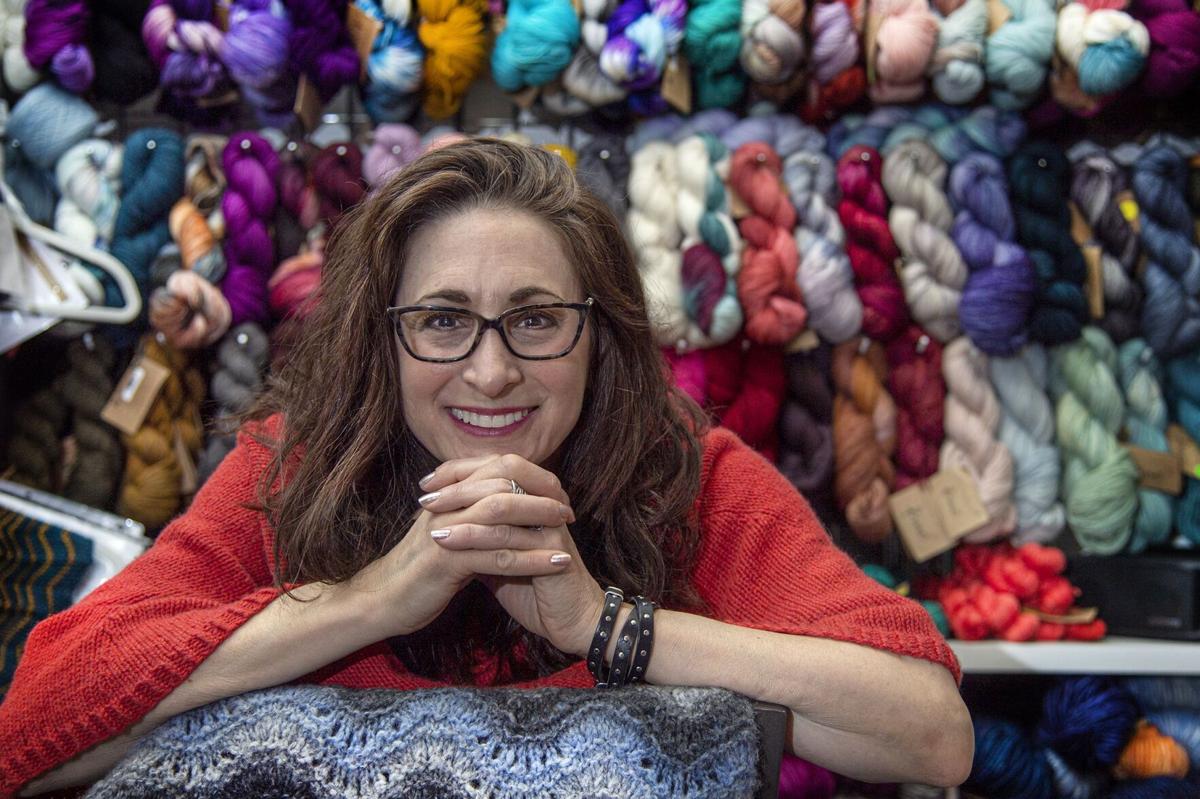 Ellen Rubin is photographed at the Luv2Knit & More in Jenkintown, Pa. Thursday, February 4, 2021.Rubin, a former immunologist, has opened a knitting shop in Jenkintown and started nonprofit to bring what she believes is the therapeutic benefit of knitting to all sorts of people.

PHILADELPHIA – Ellen Rubin is a scientist. For years, she worked as an immunologist on impressive health-related projects — like analyzing adverse drugs reactions and conducting research on pulmonary inflammation, to name a couple — for major pharmaceutical firms.

But life, like scientific research, holds much that can’t be predicted. For Rubin, that included a problem pregnancy that put her on bedrest, the grave illness of a beloved friend, the collapse of her marriage and the devastating divorce that followed.

Early in those trials, Rubin taught herself to knit. It became her constant through all of the challenges, all of the heartbreak. She also taught others to knit and, like a scientist observing cause and effect, saw how it helped them, too. And in time, a plan took form.

“Every fiber of my being was saying, ‘This is what I was put on this earth to do.’ I was put here to work with people and promote the therapeutic benefits of knitting,” Rubin said. “It’s not about what you make. It’s how it makes people feel.”

Those beliefs led Rubin, 52, to open her shop, Luv2Knit & More, in Jenkintown, Pennsylvania, in April 2017 and, in recent months, to launch her nonprofit Therapeutic Crafters on Call, which will grow a cadre of knitters and crocheters who teach others to knit and reap its benefits.

Rubin saw some of those benefits years back, when she volunteered to teach knitting to children at an enrichment program at her oldest child’s elementary school.

She said the change in the children was noticeable.

“It was in [the children’s] demeanor, the light that was in their eyes, their parents saying, ‘Thank you so much for doing this,’” Rubin said.

Before Rubin opened her own shop, she taught knitting at yarn and sewing stores in the area. When Luv2Knit opened, she of course sold knitting and crocheting supplies, including locally produced yarns and socially responsible products from abroad. But she also used the shop as a base to teach knitting and to teach how to teach it.

Before the pandemic set in, Rubin held outreach knitting classes and programs in the area for foster children, kids with emotional problems, maternity patients, stressed health-care workers, and many others. On Thursday nights at the shop, she held free crafts programs.

Since COVID-19, the latter programs are held every other Thursday via Zoom. And instead of off-site group classes, Rubin offers one-on-one or two-on-one lessons at her Old York Road shop. Meanwhile, Rubin — ever the scientist — collects articles and studies about the benefits of knitting and crafting to relieve stress and tension, compassion fatigue among nurses, and more.

The folks who have felt their lives improved by Rubin’s tutelage say the changes have been nothing short of amazing.

Semaj Alexander, 19, turned to Rubin to learn knitting and crocheting to make caps for his fledging clothing line, Tristen Larue. It wasn’t long before the young Philadelphian realized that doing the handiwork seemed to alleviate the anxiety and inner turmoil he suffers due to post-traumatic stress disorder.

“I have a lot of dead friends; the first time I witnessed a murder I was like 12,” said Alexander, adding, “I got a call the other day that my uncle had passed.”

Something about the movement of his hands relaxes him and dissipates the anger that can well up inside him. Sometimes, he said, he knits while on his job as a home health aide.

“Whenever I get my anxiety,” he said, “it helps me to calm down.”

Karen Lecks, 62, a retired nurse practitioner, and her daughter Isabel Cohen, 23, have both taken knitting lessons from Rubin. Lecks said her daughter, who has autism and intellectual disabilities, was seeing a therapist for help with anxiety. The therapist told her about Rubin.

The results have been remarkable. Not only has knitting eased her daughter’s anxiety, it seems to have lessened her need for some of the behaviors associated with autism.

“Isabel rocks; it’s self-soothing. When she’s knitting, it’s less. Less perseveration, less kicking. The knitting has helped her tremendously in terms of all those behaviors,” the Wyncote mother said.

Another thing, Lecks said, is that “Isabel has very poor fine motor skills, believe it or not.” It’s difficult for her to tie her shoes, yet she knit a sweater and hat for a baby cousin. “For her confidence, it’s been great.”

Cohen said she would recommend knitting to anyone.

“It makes me calm and collected,” she said. “If I’m anxious about anything, I can just sit down and try to focus.”

Several volunteers have been crucial to Rubin’s therapeutic knitting mission. One of them is Yolanda Pressley, 47, of Philadelphia, a loyal helper for two years and a convert to the power of knitting.

Pressley helps Rubin manage the store, planning events and communicating with their social knitting network. Pressley said she’s seen people use knitting to help them manage all sorts of problems, including overcoming addiction.

“Knitting puts you in a trance to where you’re not really aware of what’s going on around you,” Pressley said. “You’re more focused on what you’re doing at the time. It kind of makes you focus inward, and it gets your mind off other situations.”

Pressley said she uses knitting as a pain-management tool for her own ailments, including fibromyalgia. An advocate for victims of domestic violence, Pressley said she’s involved in an effort to open a shelter for women and children.

“When we get an actual physical location, I want my women to have knitting as a way of coping with some of the mental health issues they will be suffering from,” she said.

Rubin is quick to point out that she is far from the first person of science to notice the benefits of knitting and crocheting. Aside the four-inch-thick binder of articles and studies she keeps at the shop, she points out that a number of notable figures have been sold on the value of handiwork.

Albert Einstein, for one, reportedly found that knitting calmed his mind and cleared his thinking. George Washington Carver, who was born into slavery but rose to be a renowned botanist, was not only proficient in knitting and crocheting, but embroidery and weaving as well.

And, of course, one of the people who has most keenly felt the benefits of knitting is the person driven to bring it others — Rubin herself.

The Thursday night group alone has become its own community, said Rubin, and knitting has given her a purpose in life.

I'm sitting at home during the pandemic. You're going out. How to make sense of these friendships

In a cultural moment where we're holding people accountable for their actions, how much of that should apply to our friendships? When should we give the people in our lives grace for getting through the pandemic any way they can?

Dog Gone Problems: My puppy is biting my feet and wants to play at night

"When I attempt to escape into the bathroom for a few minutes of quiet, I must be careful not to trip over bath toys that now reside in my sacred shower space. But there’s always positives if you know where to look."

Ask the Pediatrician: What will happen if I give birth and I have tested positive for COVID-19?

There is still a lot to learn about COVID-19. Let's look at what you can expect when it is time to have your baby and find out what steps can help keep everyone safe.

The book is aimed at children ages 8 to 12, but its stunning black-and-white photography and biographical essays make for inspiring reading at any age.

Dog Gone Problems: Puppy digs at the shower drain like there is a monster living inside of it

Owner's new puppy tries to dig at the base of their toilet and shower drain. What's going on? Read the advice from Dog Gone Problems.

Here's how to have a date night without leaving home.

"It’s funny how many wonderful memories we — my whole family — have of not-so-wonderful occasions."

Molly Cavanaugh's son tried to bury a cardboard box time capsule in their snowy backyard. It was almost a disaster until mom came to the rescued with a sturdier capsule and a plan to break ground this summer.

Dog Gone Problems: After snow, dog is having accidents inside

An older Pomeranian dog is having trouble going to the bathroom outside after experiencing cold temperatures, snow for the first time.

Ellen Rubin is photographed at the Luv2Knit & More in Jenkintown, Pa. Thursday, February 4, 2021.Rubin, a former immunologist, has opened a knitting shop in Jenkintown and started nonprofit to bring what she believes is the therapeutic benefit of knitting to all sorts of people.