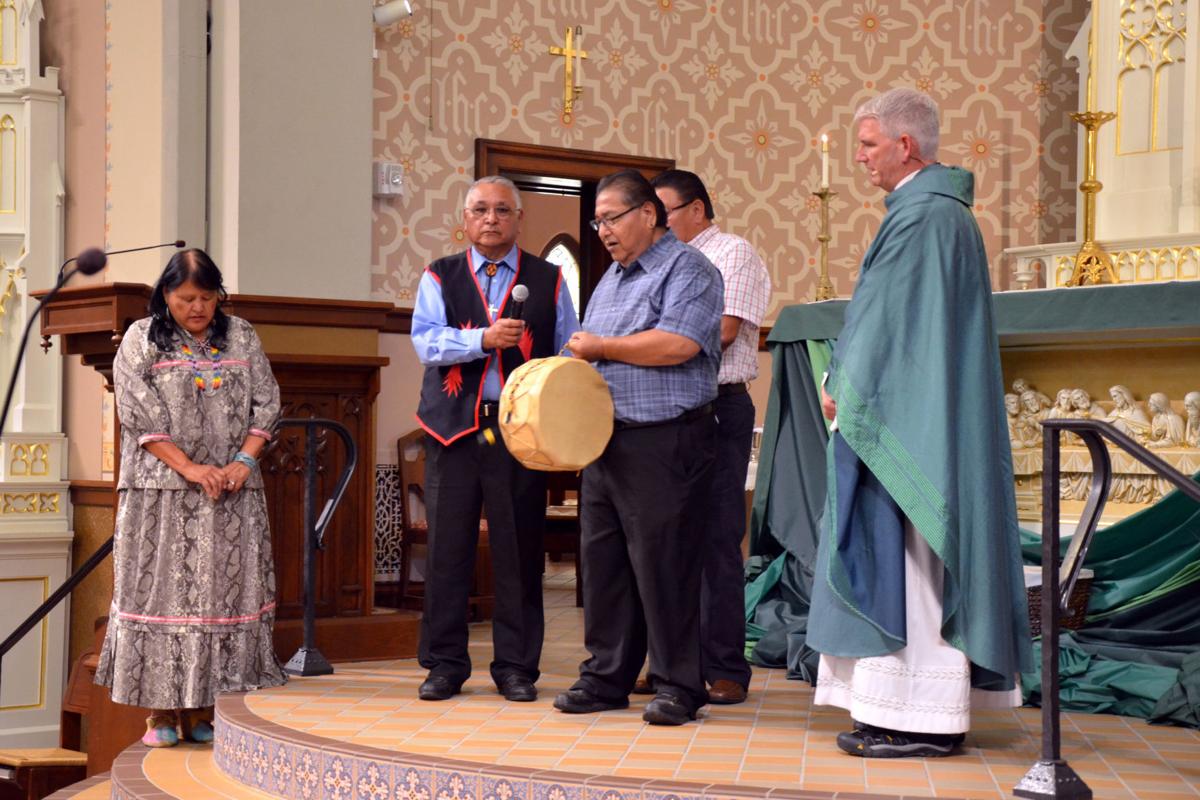 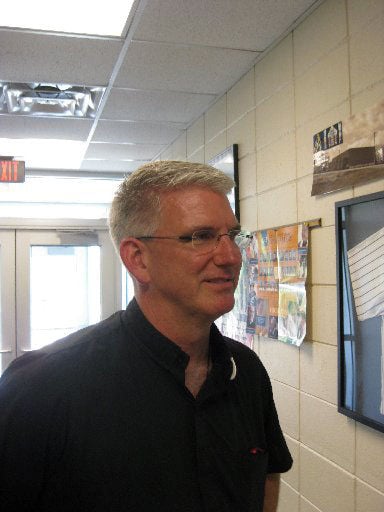 Don’t be surprised to hear the sound of a Native American flute around Omaha’s Sacred Heart Church.

The instrument is just one example of the native culture the Rev. Dave Korth brings with him to his new position with the parish and an organization for inner-city Catholic schools. Korth took over this month as pastor of Sacred Heart and chief executive officer of CUES, a nonprofit organization that supports Sacred Heart, Holy Name and All Saints Schools.

Korth learned to play the native flute during his 13 years serving the St. Augustine Indian Mission in Winnebago, Nebraska, the last 11 as director.

Korth, 50, said he would have been happy spending the rest of his career with the mission, but he knows that the reassignment by the Archdiocese of Omaha and the new challenges that come with it are healthy.

He received a rousing welcome at Sacred Heart during the 10:30 a.m. Mass on Sunday.

At the start of Mass there were three raps on the church door by Korth outside.

“Who’s there?” a parishioner called out over a microphone.

“It’s Father Dave Korth,” the priest replied. “Archbishop Lucas has appointed me as your pastor.”

The choir and band led the congregation in a spirited “All Are Welcome Here” as everyone applauded him during the procession into the sanctuary.

A sacred drum ceremony was held in recognition of Korth’s strong ties to the Native American culture. The ceremony was led by Sarah Snake and other Korth friends from the mission, who were invited by Sacred Heart to join in the Mass.

At the end of Mass the choir sang an upbeat “We Are Family” — not the secular version, but one with lyrics such as “God is our Father. ... We are fam-i-ly!”

Korth said he has always known Sacred Heart as a welcoming congregation, and he’s grateful for the opportunity to serve there.

He takes over at Sacred Heart and CUES for the Rev. Tom Fangman, who after 18 years leading both became pastor last month at St. Patrick Church in the Elkhorn area.

Korth grew up the youngest of seven on a farm near Randolph, Nebraska, and played basketball and football in high school. He attended Mount Marty College in Yankton, South Dakota, for a year, then transferred to Conception Seminary College in Conception, Missouri. He completed his theological training at St. Paul Seminary School of Divinity in St. Paul, Minnesota.

He was ordained in 1992. Previous assignments included St. Leo Church in Omaha and St. Patrick Church in Fremont. He was campus minister at Scotus Central Catholic in Columbus before taking a position with the St. Augustine Indian Mission.

He enjoys bicycling and music and has recorded four CDs with his Native American flute, with sales benefiting the mission.

Deacon Tim McNeil, spokesman for the archdiocese, said Korth did a great job at the mission, and his experience there has prepared him well for his roles with Sacred Heart and CUES, the Christian Urban Education Service.

Sacred Heart is known for drawing a wide mix of people from across the Omaha area.

Korth’s experience running the mission school also will be helpful leading CUES, McNeil said. More than three-quarters of the mission school students are from families below the poverty line. All three of the CUES schools have ethnically diverse students from economically challenged north and South Omaha neighborhoods.

Korth also has strong experience with fundraising, which will be useful in his role with CUES, McNeil said.

Korth said he will face a new challenge in working with corporate donors. The mission receives little corporate support, but such donations are an important source of funding for CUES, he said.

Mary Ann Nipp, a member of the mission’s advisory board and a parishioner at Sacred Heart, said Korth will be a great fit for the church and CUES.

She said he has a deep commitment to helping low-income students succeed, and he welcomes diversity.

Keeping your jack-o’-lantern fresh through Halloween

Drinking habits to avoid for a healthier heart

Drinking habits to avoid for a healthier heart

Times when it's best to use a debit card

Times when it's best to use a debit card

The Rev. Tom Fangman will face new challenges at St. Patrick, a large and growing parish. The priest said he would have been happy spending the rest of his career at Sacred Heart, but knows that reassignments are healthy.