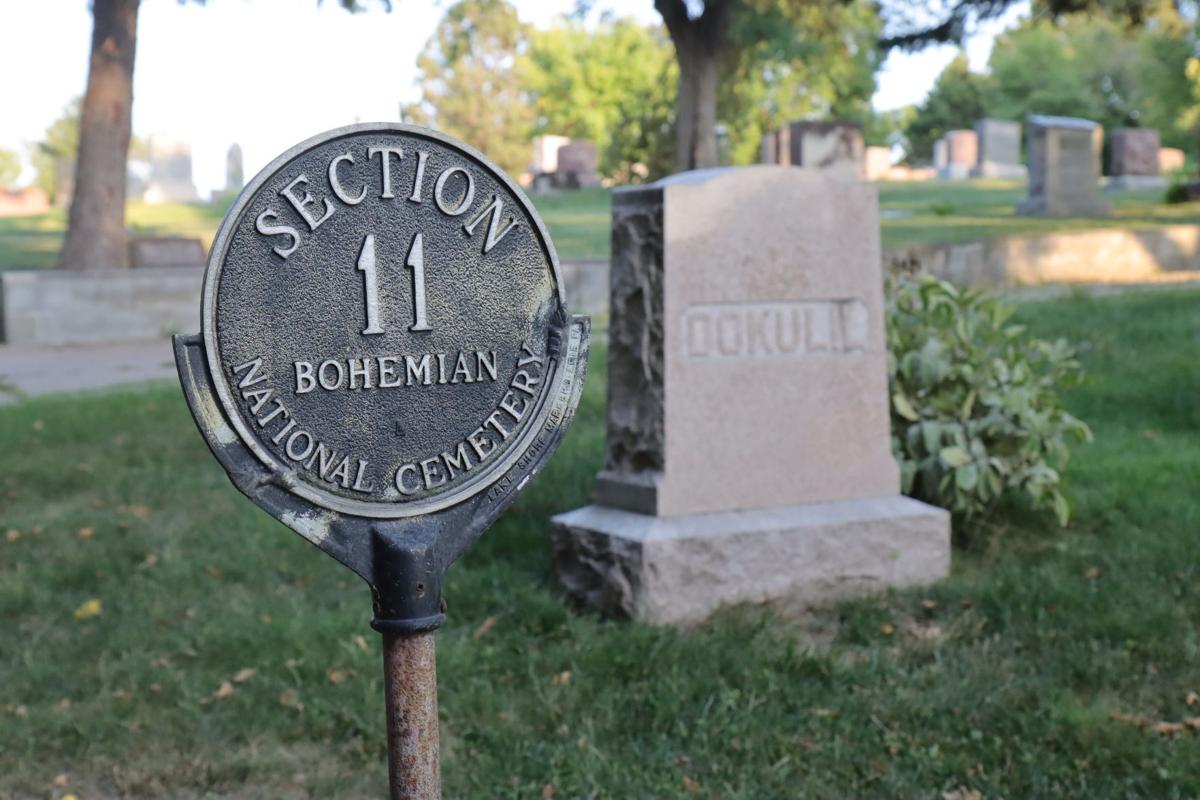 Many familiar names can be found on gravestones at the Bohemian Cemetery near 52nd and Center Streets. 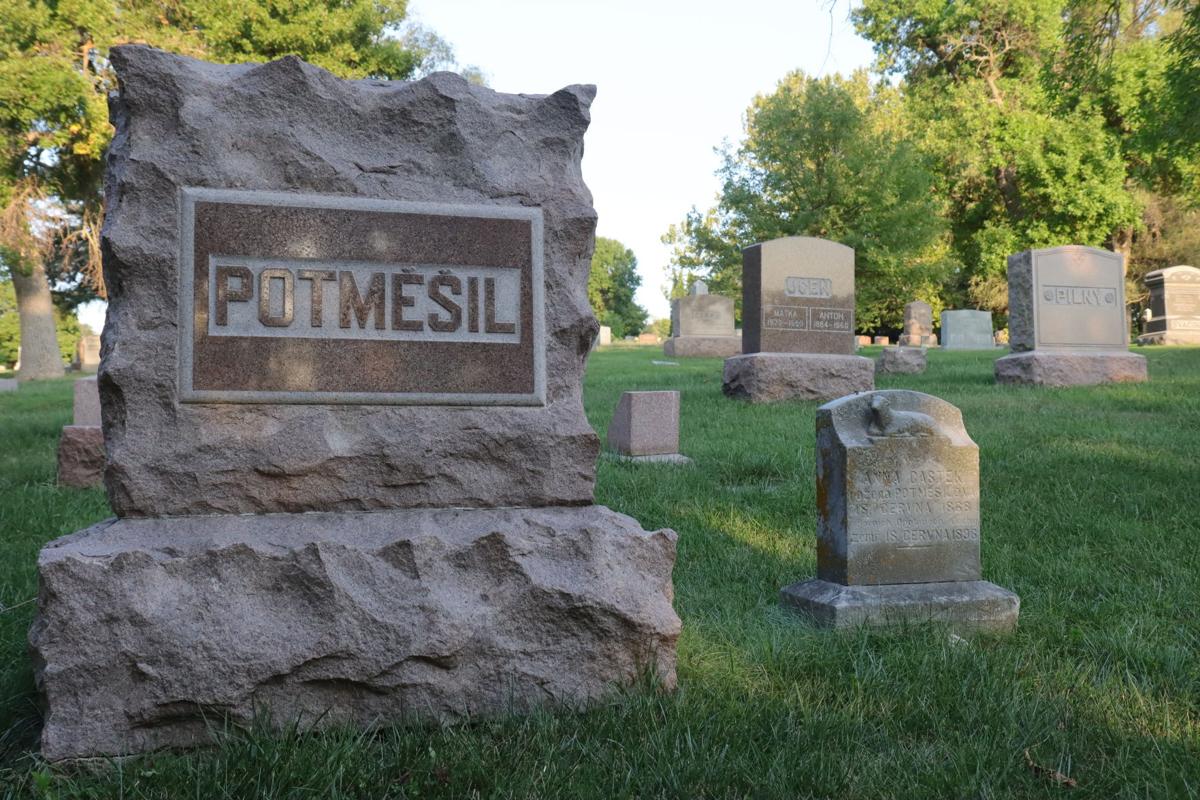 The Bohemian Cemetery was originally a burial ground for people of Czech and Slovak descent, but now anyone can be interred there. 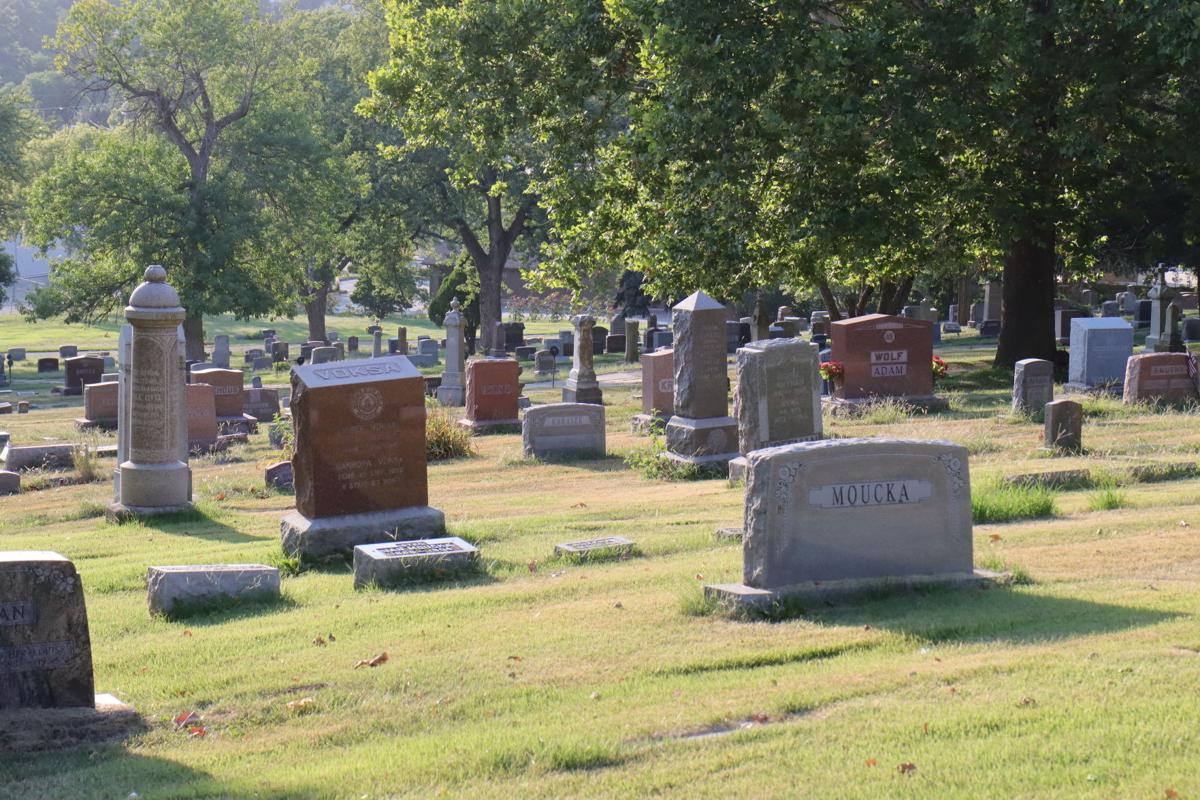 About 7,500 people have been buried in Omaha's Bohemian Cemetery since it was established in 1883, and there's room for more. 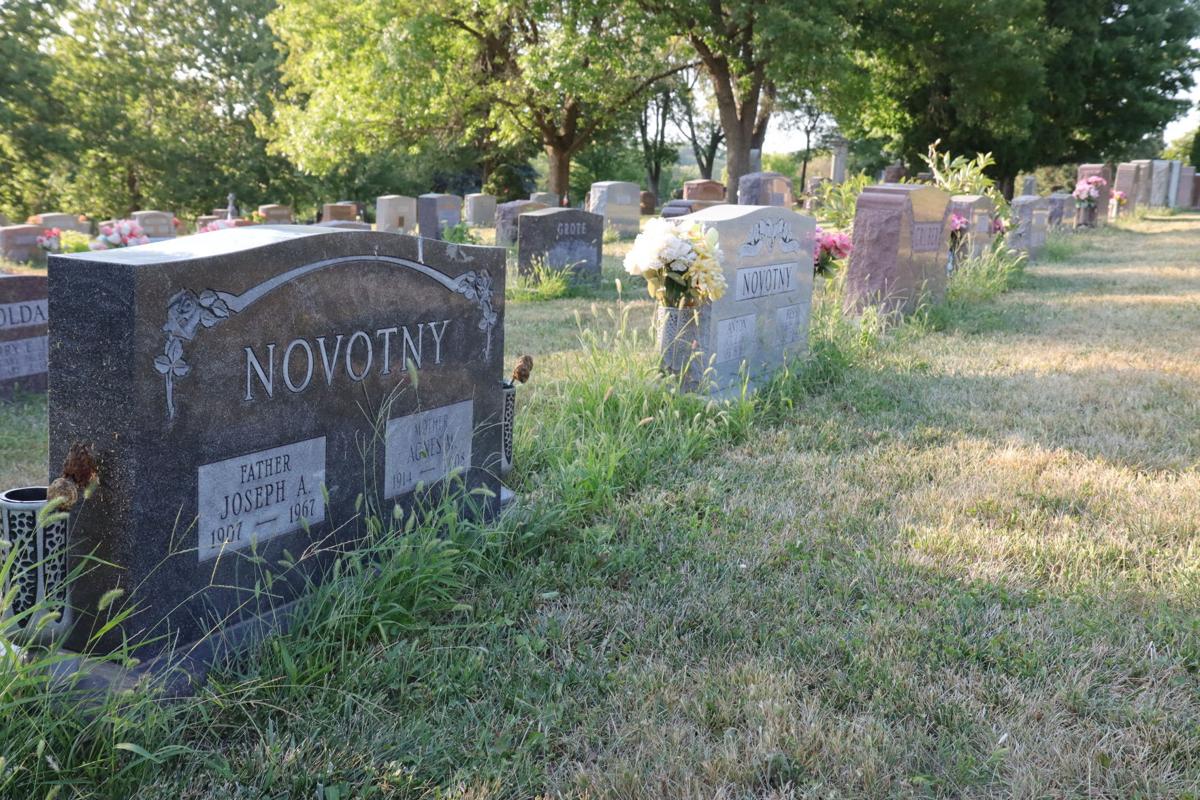 A walk through the Bohemian Cemetery in Omaha reveals a who’s who of the city, said Vicky Palmisano, co-founder of a new group to support the cemetery. 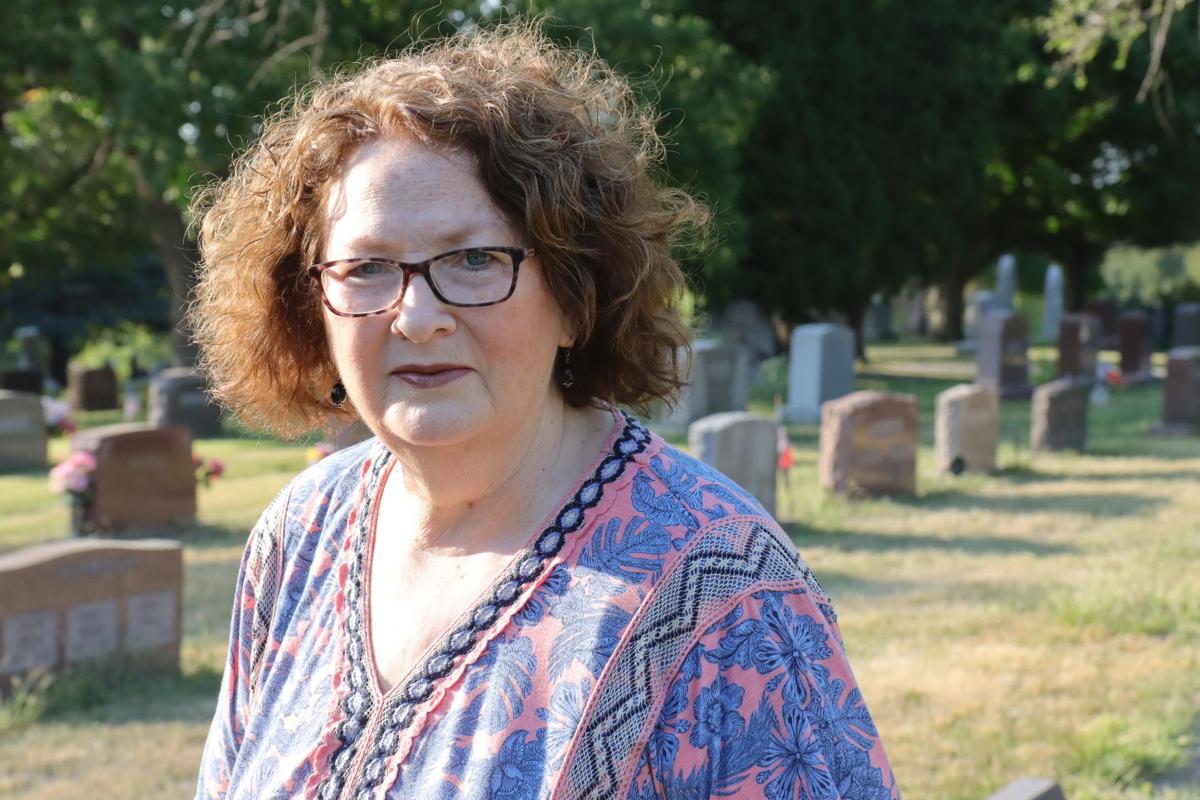 Vicky Rusek Palmisano and her siblings have been visiting the Bohemian Cemetery since the early 1960s. 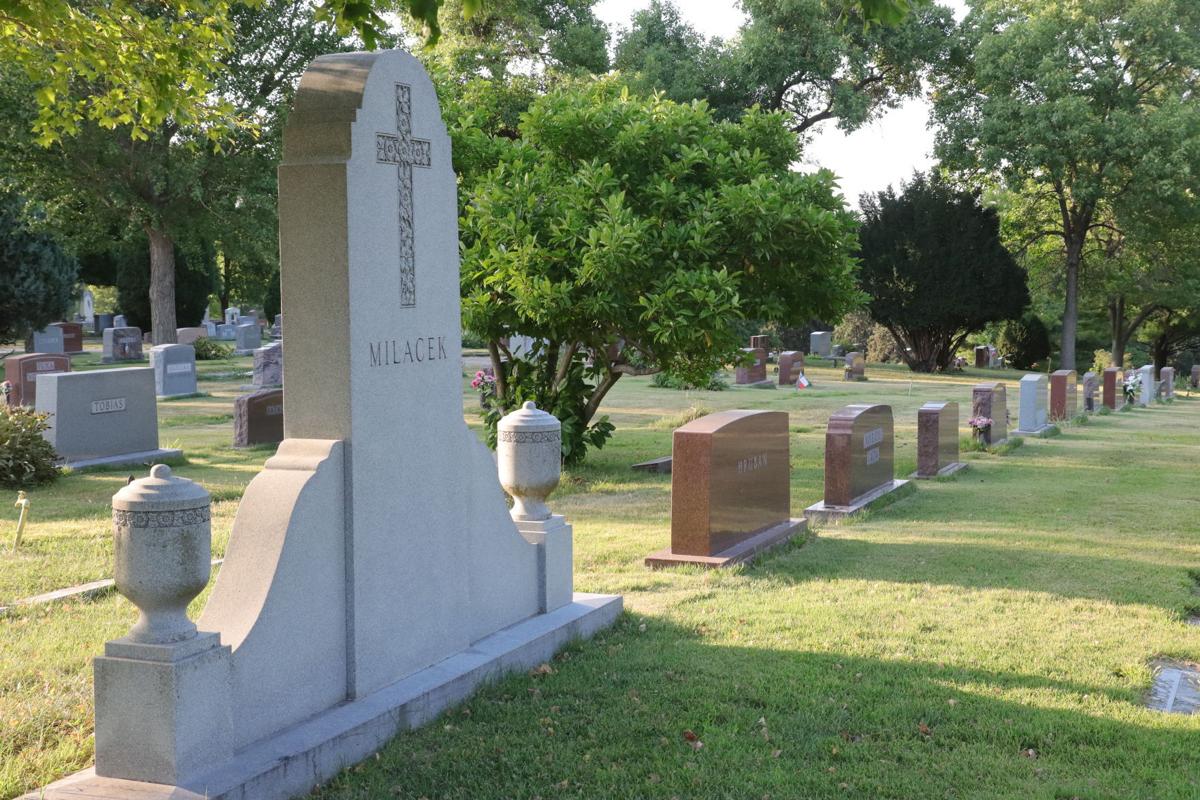 Tree trimming and removal will be one of the first projects for the Friends of the Bohemian Cemetery. 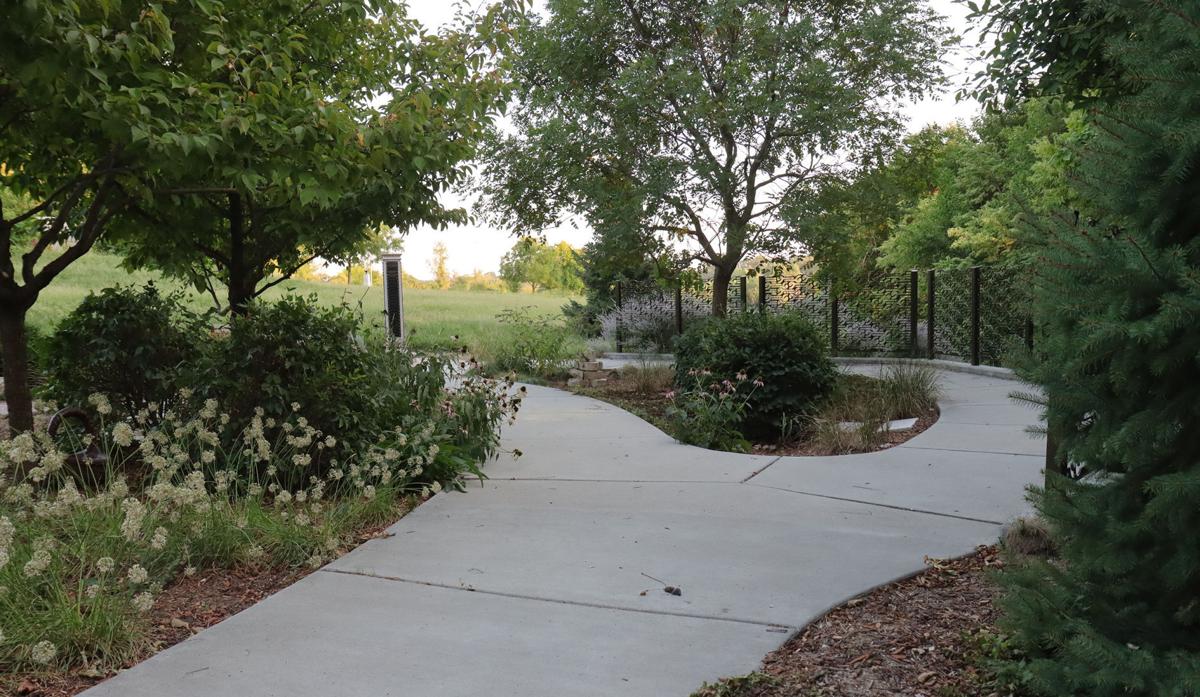 The cemetery has only one caretaker, which makes it tough to keep up with maintenance like tree trimming and weeding. 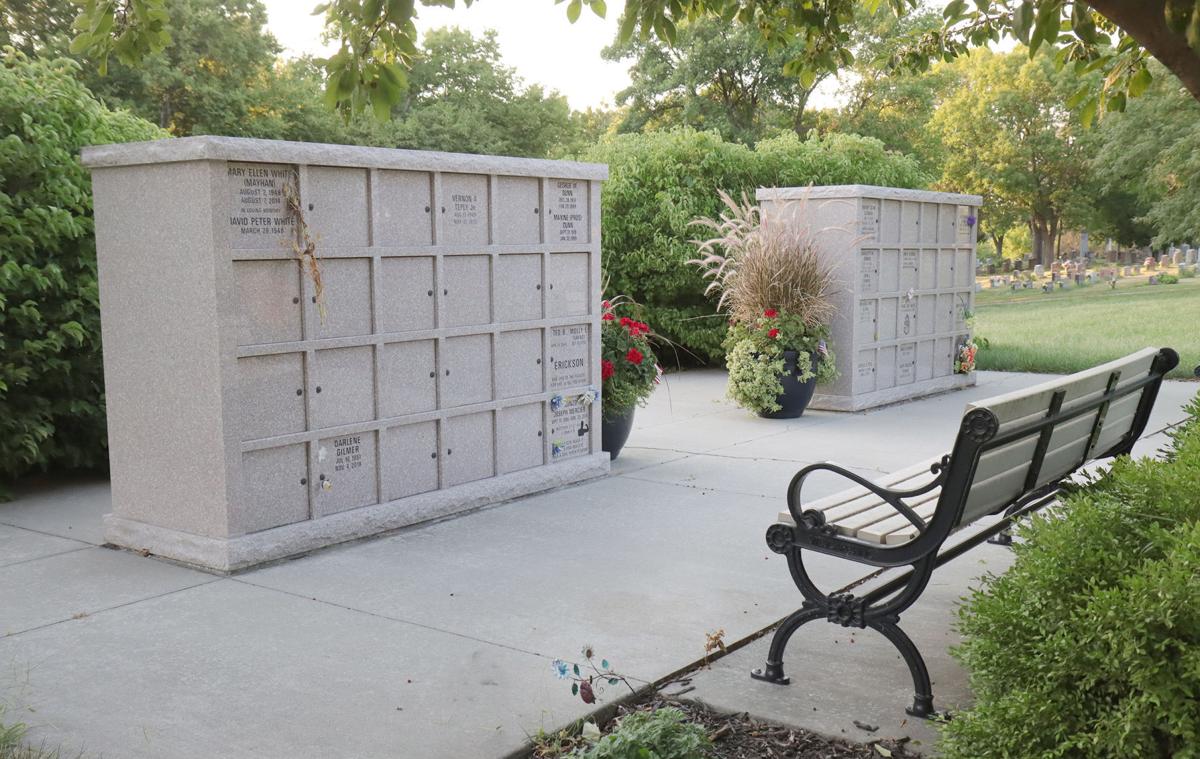 You don't have to be of Czech or Slovak heritage to have a grave or site for a burial urn. The Bohemian Cemetery is open to everyone.

Omaha’s Bohemian Cemetery, established in 1883, is the final resting place for about 7,500 souls.

They include notables such as Sen. Roman Hruska, construction company founder Charles Vrana and others who played a part in the development of the city.

And many not quite so widely known, but still deeply loved.

Like Louis and Mildred Rusek, Louis and Frances Rusek and Joseph and Emilie Kuncl.

They are the parents and grandparents of three native Omahans who have formed a new group to raise awareness of the cemetery and gather funds for its maintenance and beautification.

The Friends of the Bohemian Cemetery, founded by Vicky Rusek Palmisano, Matthew Rusek and Jana Rusek Klacyzinsky, recently sent letters to about 50 households, hoping to spread the word and spur donations.

“We plan to connect with as many people as we can,” said Palmisano, the group’s unofficial spokeswoman.

“Improving communication is the big thing,” she said. “We need to play the game, connecting people with relatives of Czech and Slovak heritage (who might say), ‘My best friend from sixth grade says her cousin Patrick will be interested in this ...’ ”

The group, which has its first board meeting Saturday, has several plans to spruce up the cemetery, so fundraising will come next. Many projects don't get tackled because the cemetery has only one paid employee, the caretaker.

Palmisano said trees need to be trimmed and removed and roads need repair. They plan to sponsor a cleanup day this fall.

“Last week, in that big wind we had, lots of branches fell,” she said. “There are still branches at the side of the road that need to be picked up.”

The siblings are running the group through the Midlands Community Foundation in Papillion rather than applying for nonprofit tax status on their own.

The cemetery is owned and operated by the Bohemian Cemetery Association, said John Yirak, its president. Anyone who has purchased a grave or a site for burial urns — or has spread ashes in the cemetery’s scattering garden — is a member.

Yirak said it takes about $75,000 to operate the cemetery each year.

The primary source of income is burial plot purchases (including places for ash-scattering and urns) and grave opening and closing fees.

And, like all cemeteries, it is required by law to put $100 from each purchase into a perpetual care fund, which also can be supported by donors. The law stipulates that cemeteries can’t touch their fund’s principal; only income from interest and dividends is available for cemetery operation.

Yirak said that income usually doesn’t amount to much, although a generous donor recently bolstered the fund.

So far, Yirak said, the association has been able to cover yearly expenses through revenue and other investments without loans, but costs are going up and the money is dwindling.

“There are things that need to be repaired and enhancements that could be made,” he said.

The Ruseks have been visiting the cemetery since the early 1960s. Their family was rooted in the Bohemian neighborhoods of South Omaha — one grandfather was a milkman for Roberts Dairy, delivering in what now is called Little Bohemia with a horse-drawn cart. Palmisano said at least one sibling still visits the cemetery each week.

When their dad died several years ago, they asked the association if they could plant a tree near his gravesite, and it was approved. When Mom died in 2018, they planted more trees, and regularly visit the cemetery to water them.

Palmisano said she’s sure many families with loved ones at the Bohemian Cemetery aren’t aware they can make such enhancements near graves. That’s one reason she wants to connect with as many people as possible.

If you wander the cemetery, a green expanse on a hill near 52nd and Center Streets, you’ll see a lot of familiar names: Hulac, a family known for its car dealerships; Pipal, as in Pipal Park; Richard Svehla, a noted physician.

There’s even a World War I spy — Charles Steiger — buried there, Yirak said.

“It’s a who’s who of Omaha,” Palmisano said.

And, said Yirak and Palmisano, there’s room for more. And now everyone is welcome, with or without Czech or Slovak heritage. The cemetery has so much unused space that the Omaha Beekeepers Club has a garden and education site there.

The Friends also hope to spruce up the cemetery’s main gate area with American, Czech and Slovak flags and more trees. The cemetery, across from a supermarket and tucked behind fast-food places and a nail salon, isn’t very visible.

Palmisano said she hopes the group, which isn’t officially tied to the cemetery, can engage young people with Czech and Slovak relatives and provide long-term support, making “in perpetuity” more than a slogan.

Holland Center Outdoors will take place on the east lawn of the performing arts venue near 12th and Dodge Streets. Those who attend can enjoy a variety of socially distanced entertainment.

Teens created a production of “Frankenstein” on Zoom and shared it on YouTube. Younger campers produced a “zoomsical,” a musical entitled “The Big 1-0.”

Whether it was a bishop's ring or an iron lung, Rhonda Hall had a reputation as the go-to person for props at theaters across the Omaha area.

The Union for Contemporary Art’s window exhibit, which began Saturday, is the opening event of “Uplift & Elevate,” described as a way to support local and regional Black artists in various genres.

A bloody massacre 300 years ago near Columbus ended Spain's Great Plains ambitions. Now you can see the battle depicted on a mural on display at the Nebraska History Museum in Lincoln.

On D-Day, hundreds of Midlanders took part in Ike's grand gamble to save Europe

Seventy-six years later, D-Day — June 6, 1944 — stands among the most storied, and important, battles in U.S. history. The fate of many nations depended on the ability of six divisions of American, British and Canadian troops to grab a toehold across 50 miles of fiercely defended French coastline.

Watch Now: Looking back on the 1975 Omaha tornado

Now, 45 years later, you can watch a video detailing the damage path along with emergency phone calls recorded on that day.

During today's coronavirus quarantine, there are echoes of the cabin fever of that awful winter seven decades ago. Except now it is the fear of an invisible contagion, not house-burying drifts of snow, that keeps relatives and neighbors apart. "Back then, we couldn't get out. With this here, it's that we shouldn't."

Did Timothy McVeigh case out Omaha as target? Ex-ATF officer thinks so

There was suspicious activity around the former Omaha federal building the week before the 1995 Oklahoma City bombing.

After the Battle of Fort Donelson, Union Gen. Lew Wallace praised the 1st Nebraska Infantry: “Their conduct was splendid. They alone repelled the charge.”

It hasn't been announced when or where the restaurant will open.

Via a website and an app, those in Omaha (and Lincoln, too) can place orders that are fulfilled in less than an hour.

Review: Playhouse's 'Don't Stop Me Now' would rock rafters if it was inside

The socially distanced rock revue was a hit at the drive-in theater. Wednesday night’s show was a winner thanks to exquisite weather and an equally sublime cast of singers and musicians.

Hurts Donut to open in Omaha the last day of September

The doughnut chain is known for its crazy flavors.

After months of planning and fundraising, the renovation of the Dr. Susan La Flesche Picotte Memorial Hospital in Walthill, Nebraska, has begun.

Many familiar names can be found on gravestones at the Bohemian Cemetery near 52nd and Center Streets.

The Bohemian Cemetery was originally a burial ground for people of Czech and Slovak descent, but now anyone can be interred there.

About 7,500 people have been buried in Omaha's Bohemian Cemetery since it was established in 1883, and there's room for more.

A walk through the Bohemian Cemetery in Omaha reveals a who’s who of the city, said Vicky Palmisano, co-founder of a new group to support the cemetery.

Vicky Rusek Palmisano and her siblings have been visiting the Bohemian Cemetery since the early 1960s.

Tree trimming and removal will be one of the first projects for the Friends of the Bohemian Cemetery. 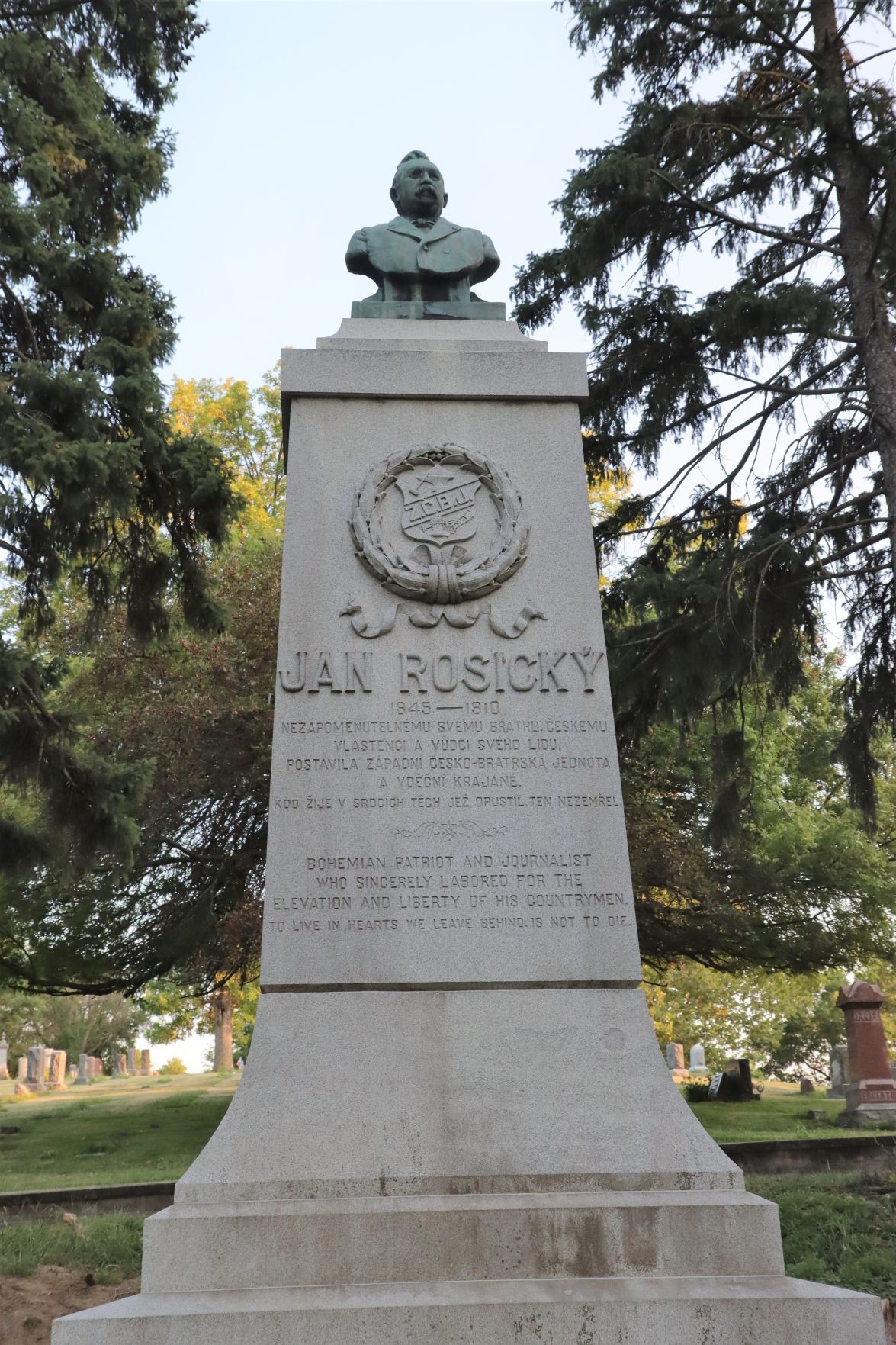 Gravestones with Czech engravings are a common site at the Bohemian Cemetery.

The cemetery has only one caretaker, which makes it tough to keep up with maintenance like tree trimming and weeding.

You don't have to be of Czech or Slovak heritage to have a grave or site for a burial urn. The Bohemian Cemetery is open to everyone. 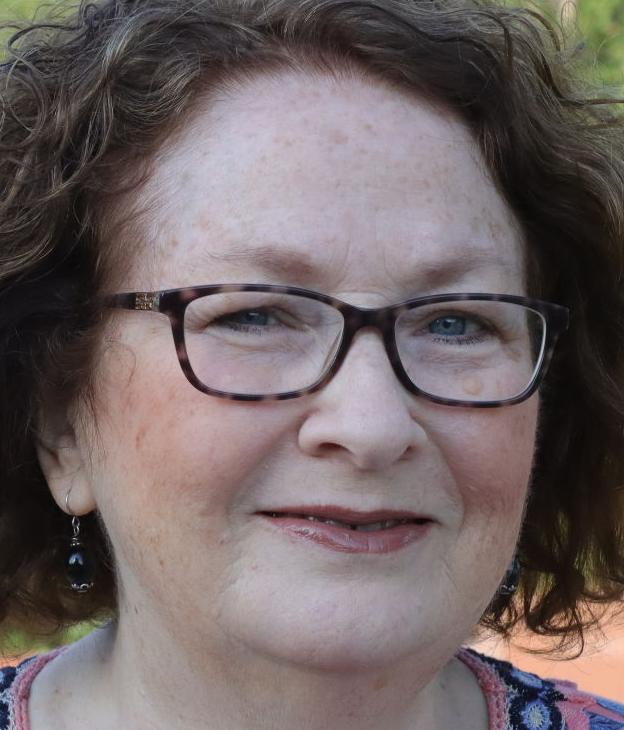