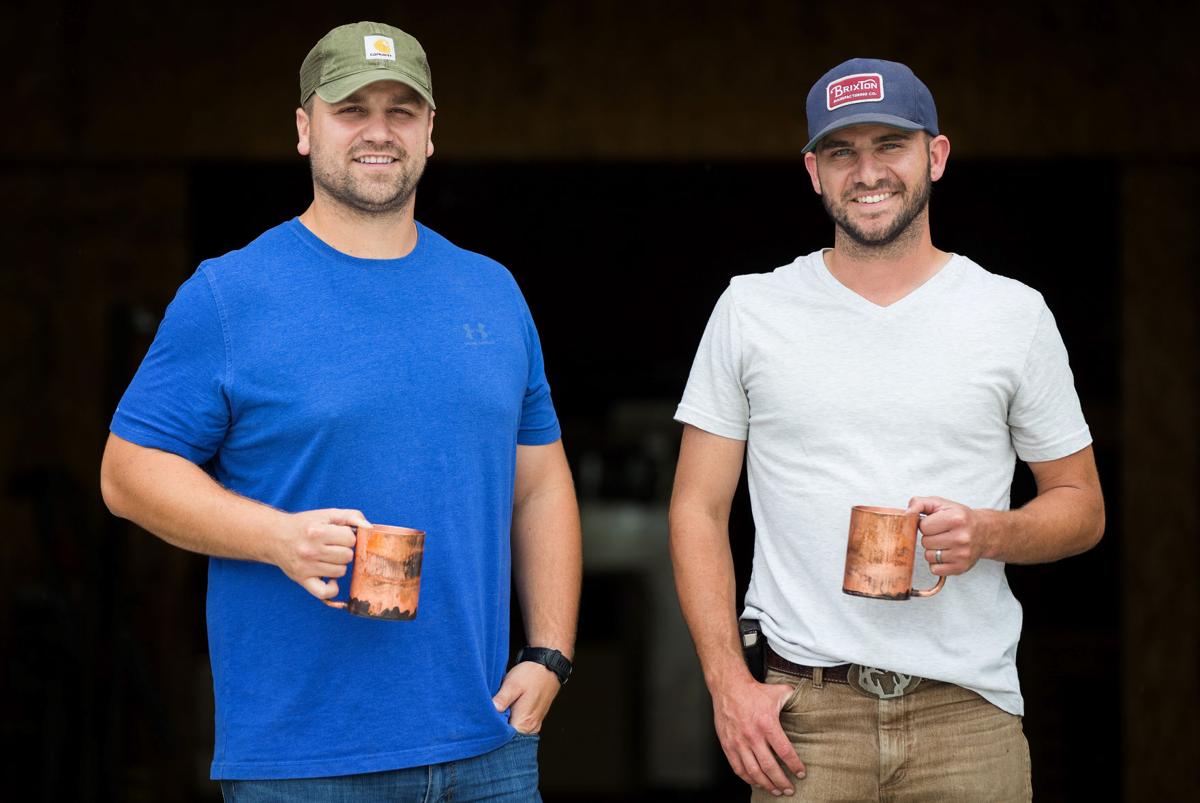 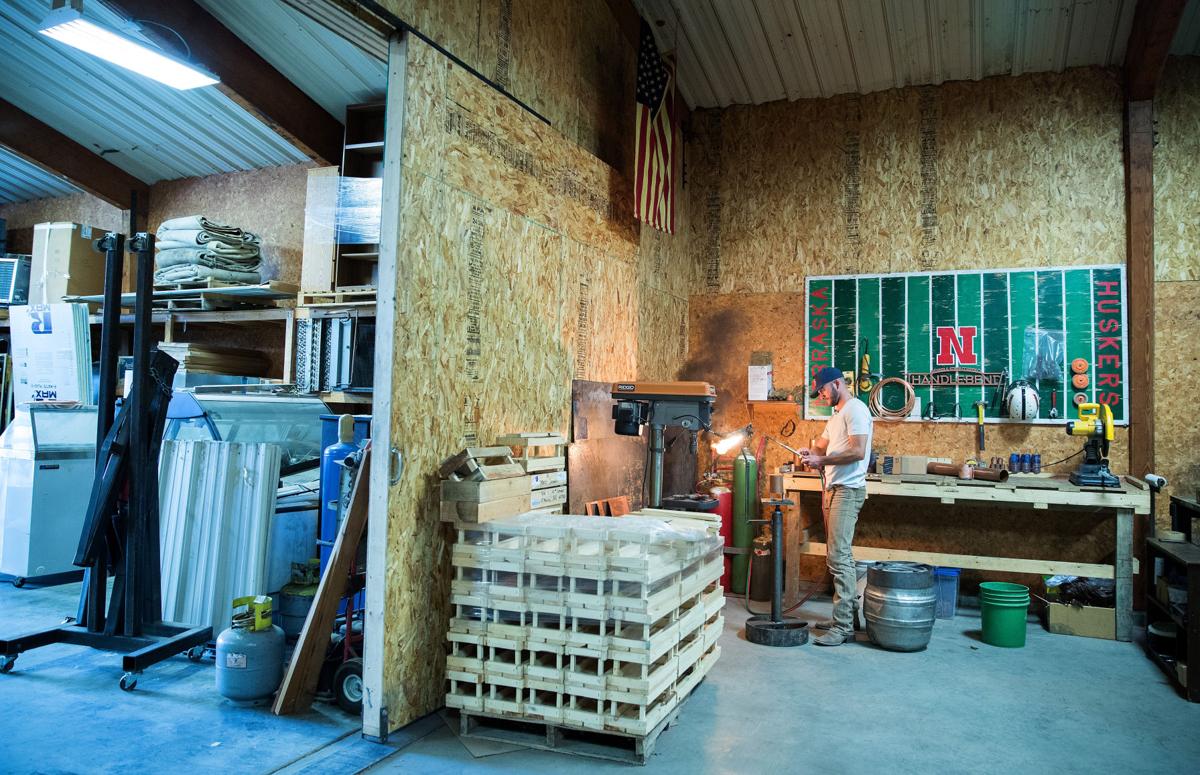 Michael Stepp fuses the pieces of a copper mug together in the workshop he shares with Handlebend business partner Matt Dennis in O'Neill, Nebraska, on Friday, June 30. 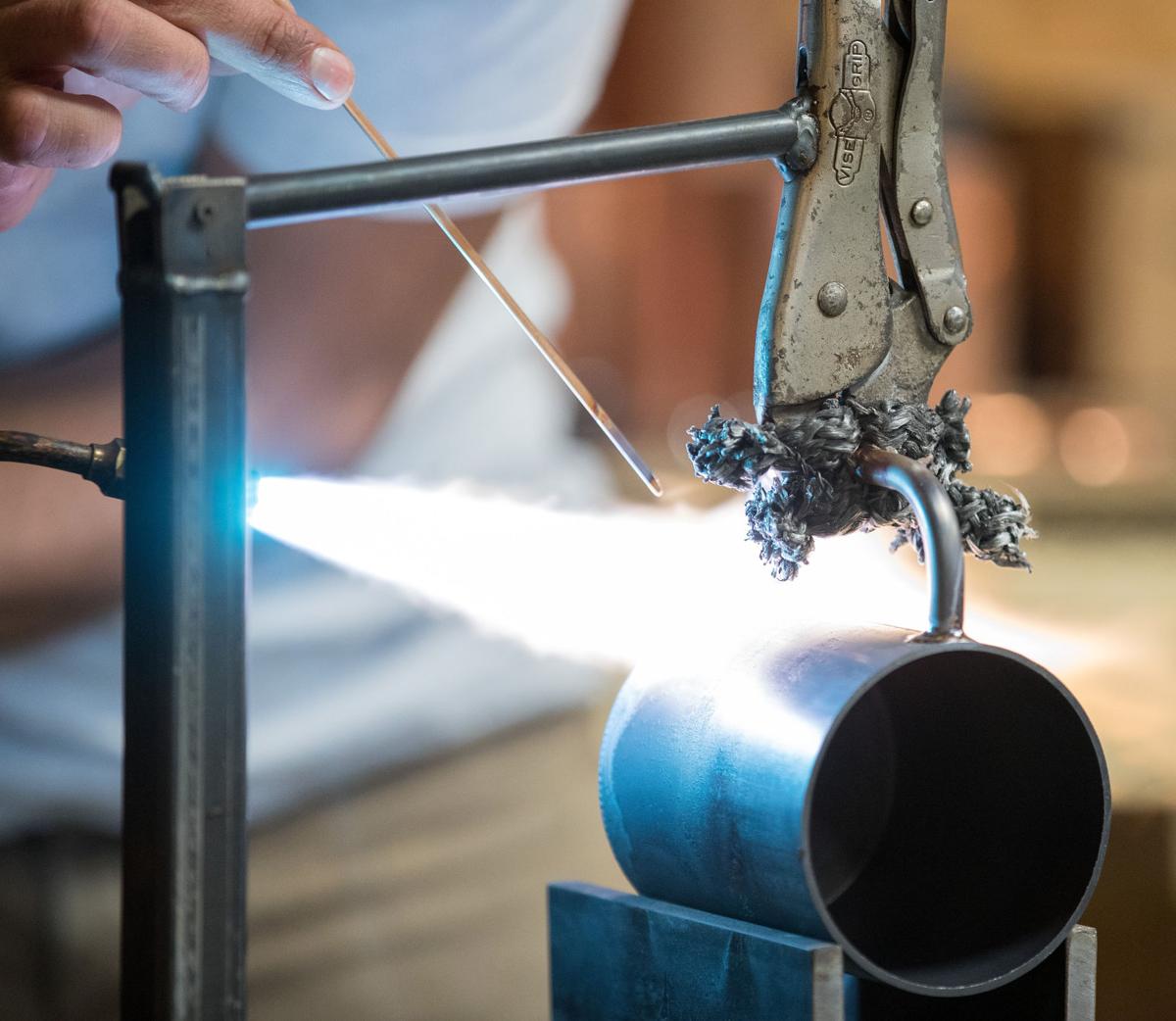 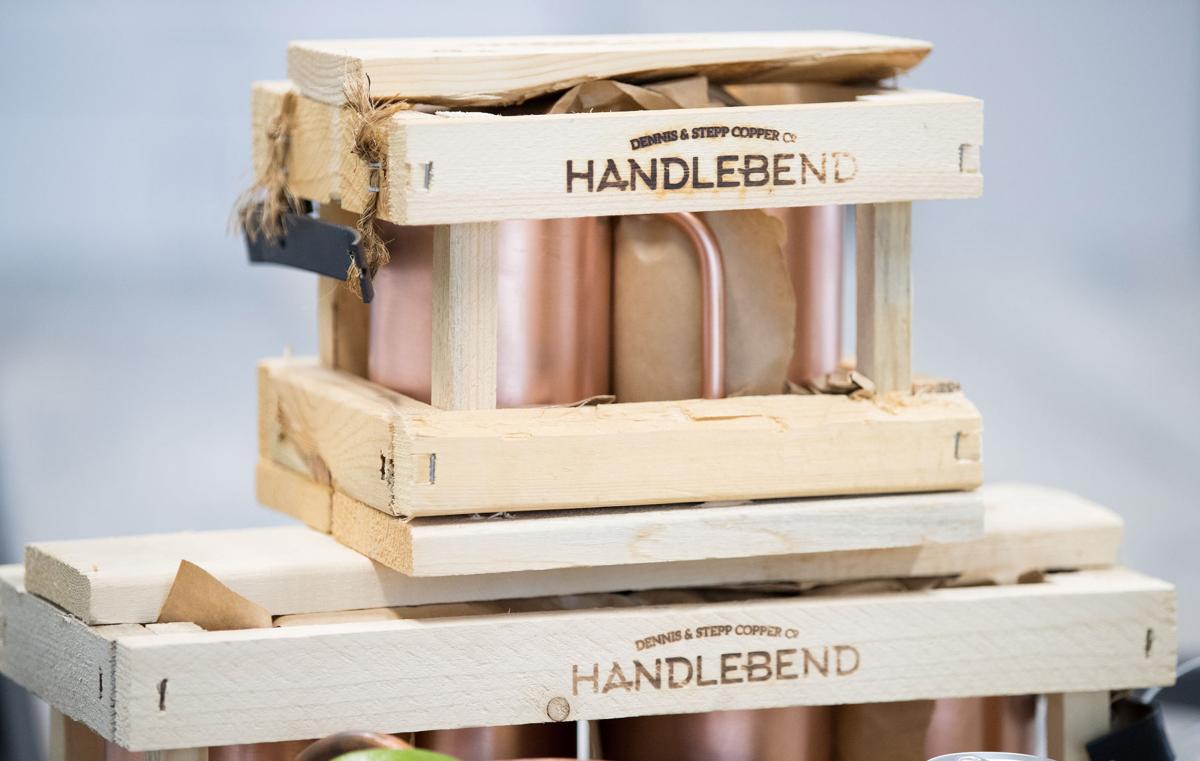 Handlebend copper mugs come packaged in a wood crate with a small crowbar to pry it open. 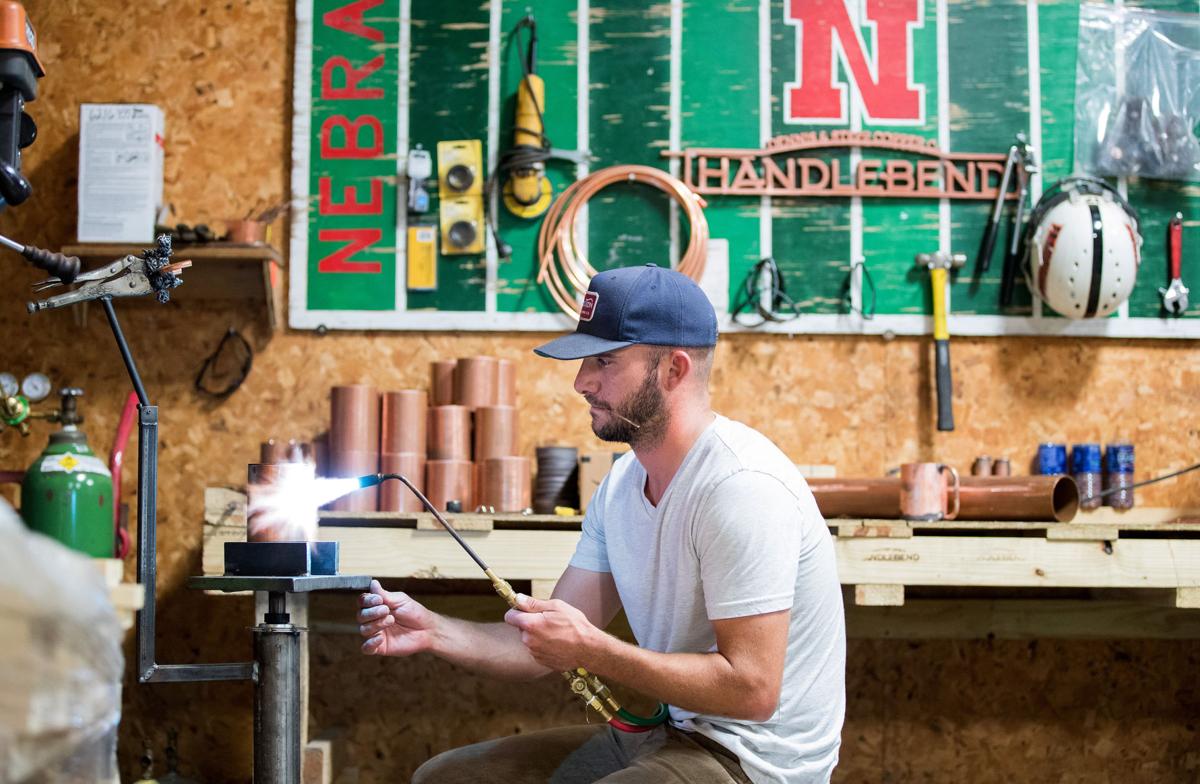 They roll out of bed hours before dawn, bleary-eyed and grumpy, as Holt County farmers have since horses pulled plows and roosters doubled as alarm clocks.

Except Michael Stepp and Matt Dennis aren’t planting corn or feeding cattle. Instead, the friends drive their pickups to a shop on the outskirts of town to chase a different small-town dream, a uniquely 21st century dream — a dream that doubles as a potential path forward for small-town America.

Matt and Michael unlock the shop at 4:30 a.m., hours before their day jobs, and wordlessly begin chopping, molding and buffing copper. They are turning the raw material into high-quality, high-end copper mugs they sell online for about $100 apiece.

They have started a two-man company, Handlebend, that with very little overhead hand-makes a niche product from rural Nebraska and ships it globally to wherever people love the Moscow mule cocktail.

“We couldn’t do this in Brooklyn,” Matt says. “I don’t even know if we could do this in Omaha. … Here you go down to the hardware store, the guy works with you, talks to you about your business for 15 minutes, slaps you on the back and tells you he hopes to buy a set soon. The small-town support is what helped make this real.”

Michael found this big idea, the kernel of their small-town dream, at the bottom of a mug most commonly associated with the Moscow mule.

It was 2010, and the then-University of Nebraska-Lincoln student had just tasted the vodka, ginger beer and lime cocktail for the first time. “Tasty,” he thought.

He quickly learned, as so many of us have, that the Moscow mule is best served out of a copper cup, which purports to keep the drink colder and tastier for longer.

When they arrived, Michael eagerly ripped open the box and felt instantly cheated. These were copper mugs in name only, with a thin copper coating over a steel interior. They seemed cheap, even though they had cost him nearly $50 per mug.

Most people, myself included, would have shrugged and made a Moscow mule. But Michael is not most people. He’s the son of a heating-and-cooling business owner, a lifelong tinkerer, a maker before that term even existed.

So he did what country boys have been doing since the roosters doubled as alarm clocks. He decided he could do it himself. He went into his dad’s shop, found some scrap copper and made his own mug.

How that first mug turned into an online mug company is a story that excites anyone trying to chart a new future for small-town Nebraska.

Holt County, like most rural Nebraska counties, has taken it on the chin for much of the past quarter century. The population dropped sharply between 1990 and 2010, according to an analysis done by David Drozd, the research coordinator for the University of Nebraska at Omaha’s Center for Public Affairs Research. In fact, during the 2000s, Holt County lost more people, more than 1,100 of them, than all but one county in the state.

But local leaders are seeing bright spots that give them hope that the county’s future will be sunnier than its recent past.

Last year 173 babies were born in O’Neill’s St. Anthony’s Hospital, a number that shattered the modern record, said Todd Consbruck, the hospital’s CEO. And the hospital is on pace to potentially tie or break that record in 2017, Consbruck said.

That’s in part because of the hospital’s quality, says Darby Paxton, the county’s economic development director, but it also may be because more young adults — the demographic that tends to be having and raising children — appear to have moved into the county in the past few years.

Paxton says that much of the recent job growth is in existing medium-size businesses, including a potato farm, fertilizer plant and ag equipment manufacturer that have all recently expanded. The state’s largest wind farm opened last winter, producing 25 new full-time jobs as well as hundreds of construction jobs during installation. Michael moved back to town to work for his dad’s business, Steppco Refrigeration.

But what’s also growing in Holt County are small businesses started with small investments by young adults. In the O’Neill area alone, a new brewery, a new coffee shop and a new boutique on Main Street have all recently opened. A small business owner builds engines for race cars all over the world. And then there is Handlebend, which from a corner of an HVAC shop is attempting to sell copper cups from here to everywhere.

“You are not bound,” Paxton says. “If you produce something like this, you are no longer bound by geography.”

Handlebend started in earnest when Michael formed a partnership with Matt, his longtime O’Neill buddy and former college roommate. After Michael made himself a set of mugs, Matt decided he needed a set, too. Fine, but you are helping, Michael said.

Together they made copper mugs for Matt, who moved back to O’Neill after college to help run the Dennis family’s grain merchandising business. Then they made mugs for another friend, and another. They gave them away as wedding gifts. They gave them as birthday presents. And they started thinking … could we sell these to strangers, too?

They figured out slick packaging that involves a mini-crate that holds the mugs and a tiny crowbar that opens the crate. And then they started getting up early.

On a recent weekday afternoon — I wasn’t game for the 4:30 a.m. interview — Matt and Michael walked me through the steps of their manufacturing process.

They begin with 20-foot sections of copper pipe, which they cut and chop and bend into handles to their liking.

They fire up the brazing torch and hand-mold the copper mug to their own specifications using several homemade contraptions they built with the help of Michael’s uncle. They clean and polish and coat — they have actually found that the unpolished mugs sell far better — and package in the signature Handlebend crates.

The final product is undeniably gorgeous, undeniably sturdy and also undeniably expensive, $400 for a set of four. Copper is expensive, the business partners say, plus it takes them at least four hours to make that set of four mugs.

“There’s something more to this than you can order off china.com,” Michael says. “It’s like a pair of cowboy boots, or a hunting knife. Sure, you can get those for $25 at Walmart, or you can also get them for $400 made to last. If people appreciate our workmanship, great! If not, fine, I will drink a mule out of a cheap mug with you, too.”

And, increasingly, people are willing to shell out the money to get a Handlebend signature set. The company has sold $35,000 worth of mugs in the past nine months, particularly impressive when you consider that Matt and Michael aren’t yet advertising and are making mugs part-time, mostly before the sun comes up.

The business partners have partnered with a Lincoln bar and Omaha’s Brickway Brewery for events. They have noticed that orders are coming in from more and more states. And now, for the first time, they are preparing an advertising push, hopeful that it will cause a huge problem: How do we keep up with demand?

They are not wholly unlike the men and women who built sod houses on this land. They are not unlike the farmers who awoke with the roosters and fell into bed after dusk. But since they are 21st century pioneers, the Internet is their soil and their horizon is unlimited.

How big will Handlebend get? They don’t know. But they are going to wake up tomorrow morning, hours before dawn, and find out.

“I feel like our generation is kind of, in a weird way, going back to our grandparents, our great-grandparents,” Matt says. “Buying our food at farmers markets. Local beer. Locally made soap! And we are making these mugs for you, especially for you. We hope that when you open that wood crate with a crowbar, and you have one of our mugs, you love them. Then you become our best salesmen.”

Prepared with support from the Nebraska Community Foundation

The key to competing in the new economy is to link together four critical resources that nearly every community has: leadership, entrepreneurship, youth engagement and philanthropy.

The 'oldest tavern in the state,' locally owned Columbus bar hasn’t changed much since 1876

Tourists come to see the “oldest tavern in the state.” But for the town’s residents, it’s Glur’s local ownership through the years that stands out, making it a place they’ve always been able to rely on for a cheap burger and a cold beer.

In 2017, perfect stargazing is as rare as a surfer’s killer wave or a sommelier’s perfect bottle of wine. But the Nebraska Star Party is the astronomer’s version of the Oahu waves or the vineyards of Bordeaux.

Michael Stepp fuses the pieces of a copper mug together in the workshop he shares with Handlebend business partner Matt Dennis in O'Neill, Nebraska, on Friday, June 30.

Handlebend copper mugs come packaged in a wood crate with a small crowbar to pry it open. 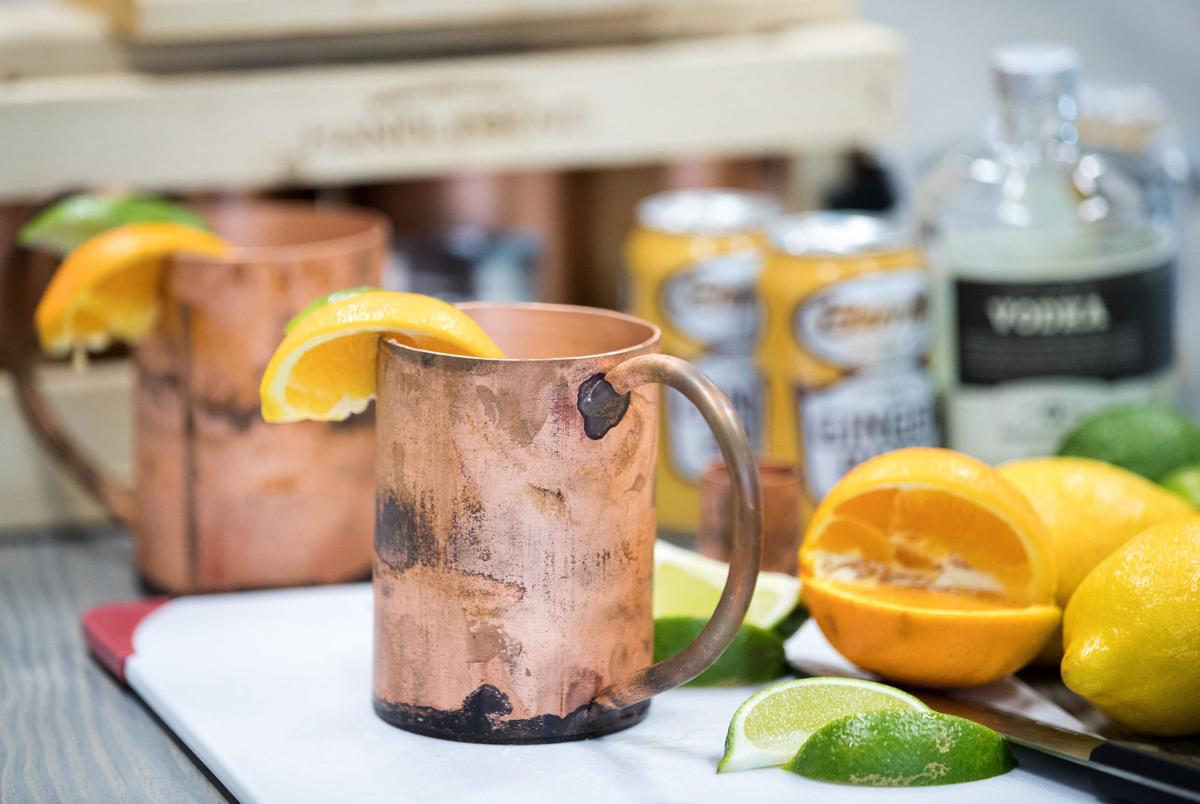 Each of Handlebend's copper mugs, hand-made by Matt Dennis and Michael Stepp, are 100 percent copper and weigh 2 pounds.