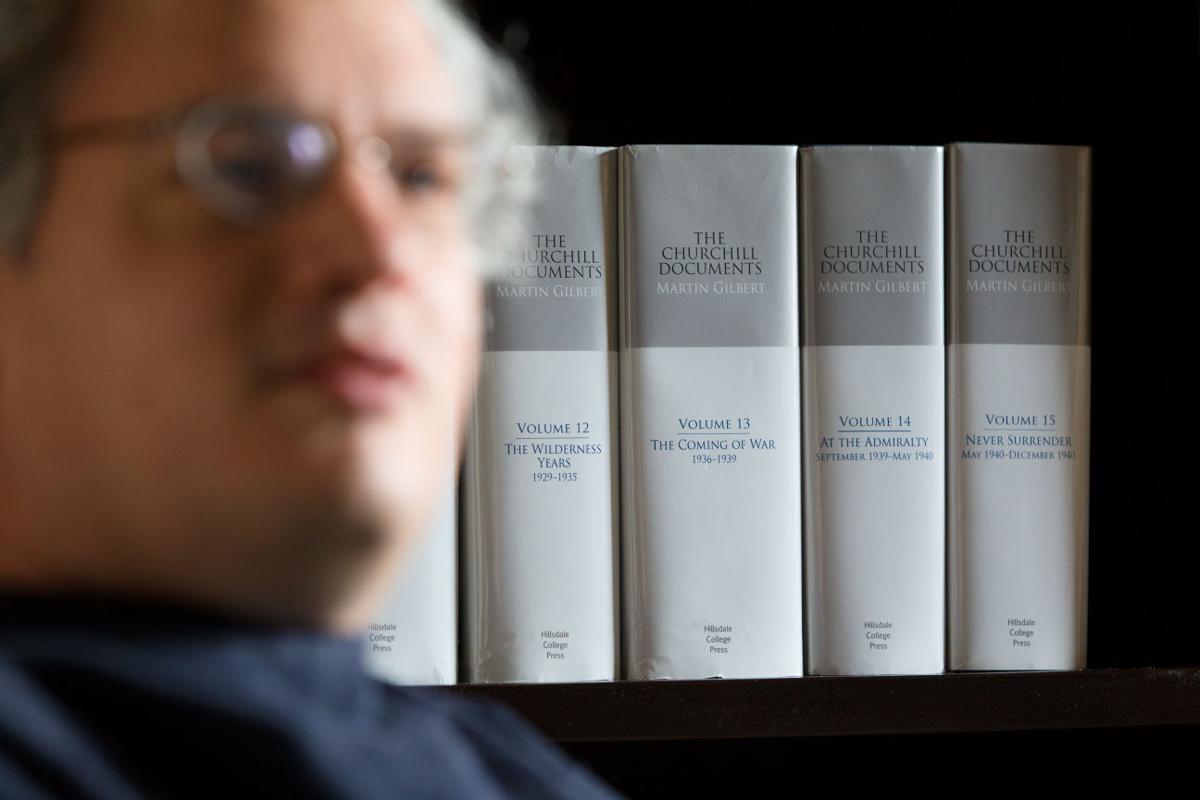 John Meeks, head of the Retired Honourable Sir Winston Spencer Churchill Roundtable of Nebraska, at home in his library. 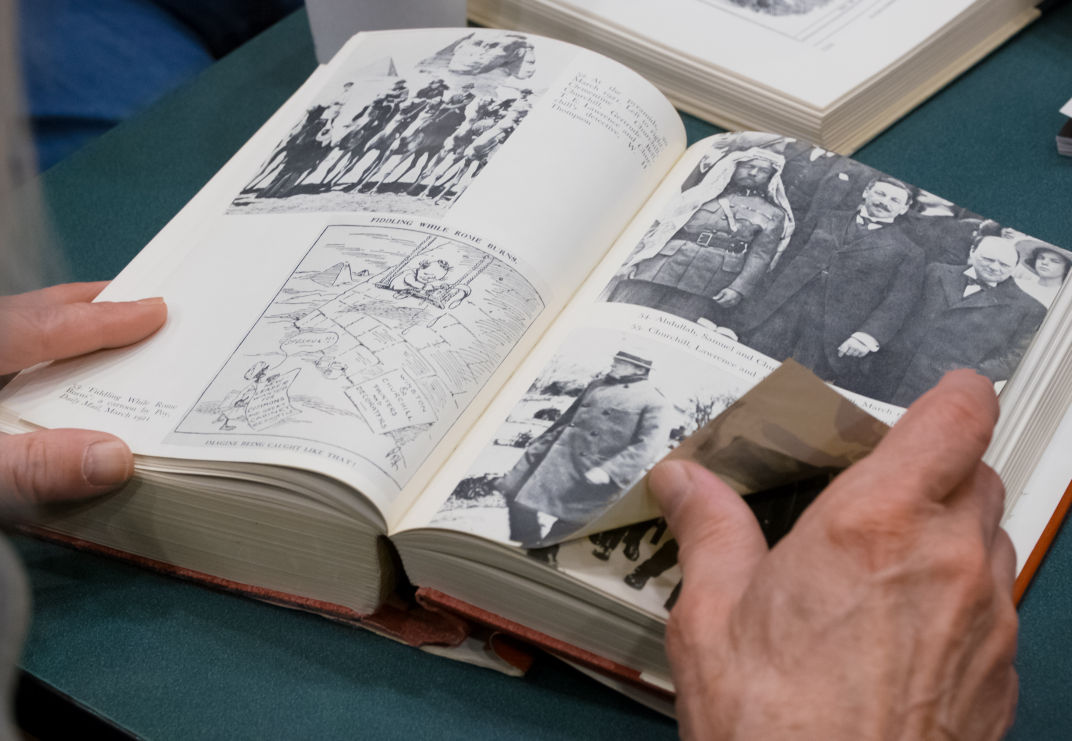 The Right Honourable Sir Winston Spencer Churchill Roundtable of Nebraska holds its monthly meeting at the Barnes and Nobel at Crossroads Mall. 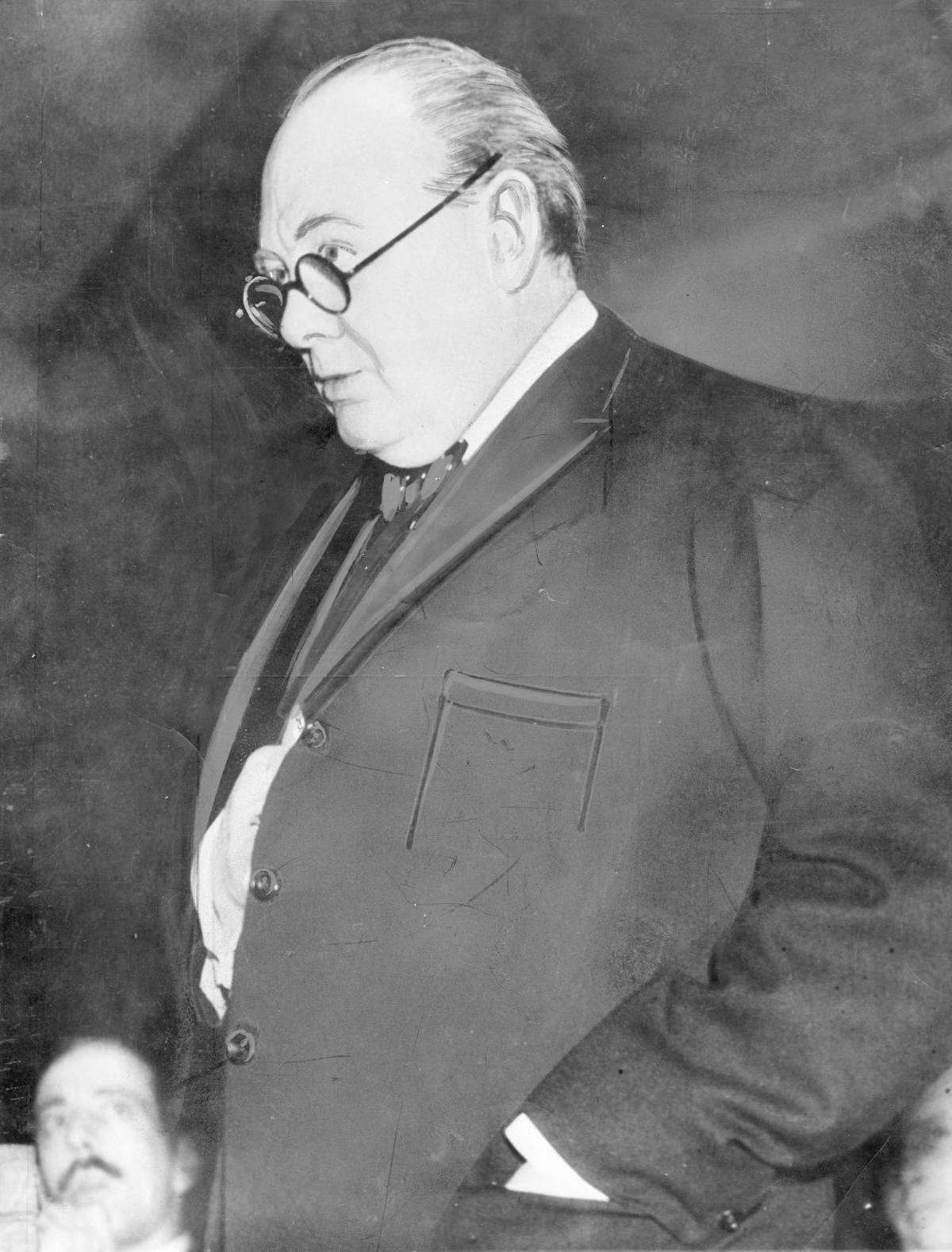 On a bright day in March, as it has every month for years, a small group crowded around a table and discussed, well, a lot of things.

They talked about the politics of Turkey in the 1920s and debated the year in which Constantinople fell (1453).

They talked about Franklin Delano Roosevelt and the rumors that his daughter asked the president’s mistress to visit him on his deathbed.

They talked about dealing with grief and separating personal feelings from professional responsibility.

But, mostly, the members of the Right Honourable Sir Winston Spencer Churchill Roundtable of Nebraska talked about a man who has been dead for more than 50 years and who most likely never set foot in the Cornhusker State.

The roundtable meets at Barnes and Noble in the Crossroads Mall to discuss books written by or about the United Kingdom’s most famous prime minister. Currently, the group is slogging through an eight-volume biography of Churchill written by Sir Martin Gilbert. They cover one chapter per month, meeting at 2 p.m. and often talking until the store closes.

In his spare time, John Meeks, president (or perhaps more aptly, prime minister) of the group, is devouring an 18-volume supplementary series to the biography, filled with letters, reports and other source material. He subscribes to two Churchill periodicals (“The Churchillian” and “Finest Hour”). And, next to his bookshelf in the basement, he has a framed portrait of the statesman.

In total, he estimates that he’s read about a dozen telephone book-sized volumes on Churchill.

It all raises a question: Why? What’s so interesting about a figure whose reach, for many Americans, extends only so far as the cover of a 10th-grade history book?

“I just find each chapter exciting,” Meeks said. “I like it because it’s nonstop action.”

Born into the aristocratic Spencer family (which includes the late Princess Diana), Churchill grew up to serve in the British Army, distinguishing himself as a writer. Throughout his adulthood, he held many prominent positions in U.K. government, serving as president of the Board of Trade, Secretary of State for War and Minister of Munitions, among other posts.

Near the start of World War I, he served as First Lord of the Admiralty, taking up the post again near the outset of World War II. With the resignation of Neville Chamberlain in 1940, he became prime minister for the first time, leading a country that was embroiled in war with Nazi Germany.

It’s inspiring stuff, said Mary Illig, a member of the Omaha roundtable and supporter of The Churchill Centre in London and the National Churchill Museum in Fulton, Missouri.

“Churchill really provides an excellent foundation for leadership,” she said.

Decades after his death from a stroke in 1965, Churchill remains a well-known international figure. In 2002, his home country voted him the “greatest Briton of all time.” His wartime decisions have been dissected and reviewed by countless scholars of 20th century history.

In Omaha, the roundtable draws an eclectic group. Attendees range in age from 40s to 70s. Their common thread is an interest in history and an appreciation for good conversation.

The most recent meeting saw a crowd of six — Meeks, a computer programmer; Illig, a software engineer; Mary Gittings, a phone surveyor; Rendell Paden, retired from the Millard Public Schools; David Fried, a writer; and Jim Whealy, a military retiree.

Some, like Meeks and Illig, are die-hards who find Churchill’s legacy fascinating. Others attend the meetings simply because they like the discourse his life inspires.

“We introduce other types of discussion — sociology, politics, military issues, how the U.S. and Russia survived mutually assured destruction,” Fried said. “It’s a fun occasion if you’re into history and higher education.”

It wasn’t always about Churchill, Meeks said. The roundtable began meeting in the 1990s as a Civil War reading group. One day, Meeks, who had first learned about Churchill on a 1983 TV miniseries called “The Winds of War,” picked up a book about Churchill, thought it looked interesting, and chose it for the group’s next read.

From there, he said, it just kind of took off. He’s tried steering the group into different topics — Shakespeare, a retread of the Civil War — but Winston, as they call him, just seemed to stick.

A number of members have been involved for about a decade. The group recently set up a Meetup page that has drawn some new faces.

The monthly meetings start with the reading material, with members bringing up the points they find most interesting and asking questions about confusing parts of the text.

But the discussions often take on a life of their own, spinning into digressions on history, politics and anecdotes from their lives.

At the most recent meeting, the roundtable pored over Volume IV, Chapter 34, “A Wonderful and Terrible Year.” The year, 1921, saw the death of Churchill’s mother, Jennie, and two months later, his young daughter Marigold.

Did the group think, Gittings asked, that Churchill, who was serving as Secretary of State for the Colonies, let his grief affect his policies?

“He wants to get back to work as soon as possible,” she said. “He did a good job to separate his duties from his personal life.”

It resonated with Gittings.

Churchill provides an inspiring example to follow, the group said. Through threats of annihilation or the mire of 20th century politics, he remained positive.

About an hour into the roundtable’s last meeting, a young man, sitting at a nearby table, stood.

“No, not so much. I was just kinda curious.” The man sat down.

Undeterred, the roundtable forged ahead, carrying on through the afternoon.

Trev Alberts finds the perfect bride for his son

The couple were married Oct. 30 and soon will be moving to Savannah, Georgia. Alberts' son, Chase, is a West Point graduate and a member of the U.S. Army.

How will I survive winter break? My kids will be home 24/7

"Last week we had Thanksgiving break, and it reminded me how woefully unprepared I was — both physically and mentally — to have my children home all day with me for six straight days."

Body spray recall: What the finding of a cancer-causing chemical means for you

Benzene, a known cancer-causing chemical, was found in over half of 108 batches of antiperspirant and deodorant body sprays from 30 different brands, according to a petition filed with the FDA.

Dr. Cynthia Lewis, who started the practice, said she and her staff wanted a way to provide even more specialized cancer care to patients without having to send them three hours or more to Omaha.

Thumbprint cookies are a tasty holiday tradition that can be enjoyed year-round. And they are simple to make.

The best family traditions are those started by accident

"As we have these special annual events, it’s probable that other people wouldn’t even know anything memorable was happening."

Santa's coming to town. Here's where you can find him in 2021

Santa Claus is coming to town. Here is a list of places in the Omaha area that are hosting the man in the red suit.

I have two siblings who shared snide remarks about my partner behind my back. I don't even know if I want to fix this. But carrying this on my own is painful.

Over a year later, I still feel the hurt and abandonment of being so unceremoniously dropped at such a critical time by someone I had come to trust so completely.

Ask Amy: 'Bestie' should be honest with friend who's having an affair

My best friend of 25 years is having an affair. What's my job as a best friend? Must I show my support, no matter what?

John Meeks, head of the Retired Honourable Sir Winston Spencer Churchill Roundtable of Nebraska, at home in his library.

The Right Honourable Sir Winston Spencer Churchill Roundtable of Nebraska holds its monthly meeting at the Barnes and Nobel at Crossroads Mall.