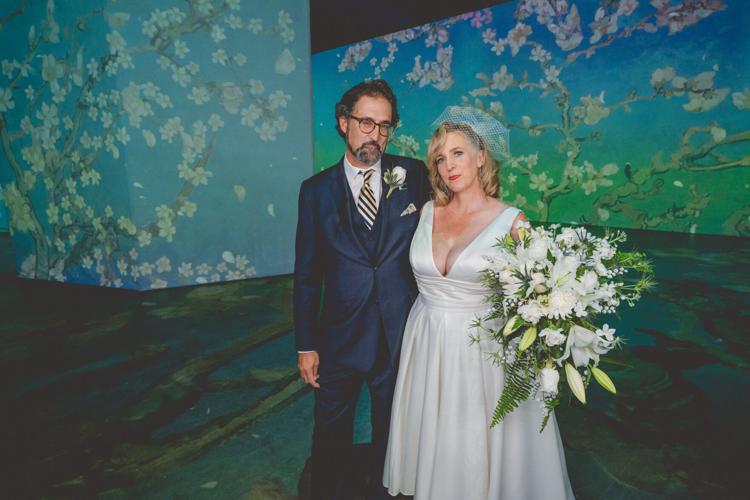 David Hudson and Deanna Walz said it was a whirlwind event but also fun and beautiful. 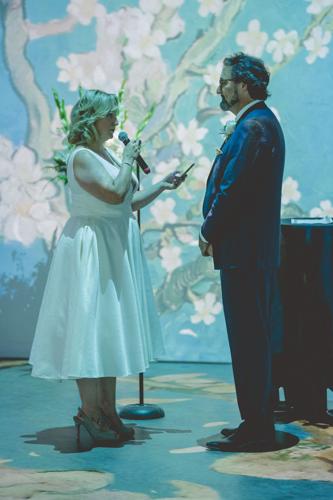 The only thing they had to do for the wedding was write their vows and pare down their original guest list. 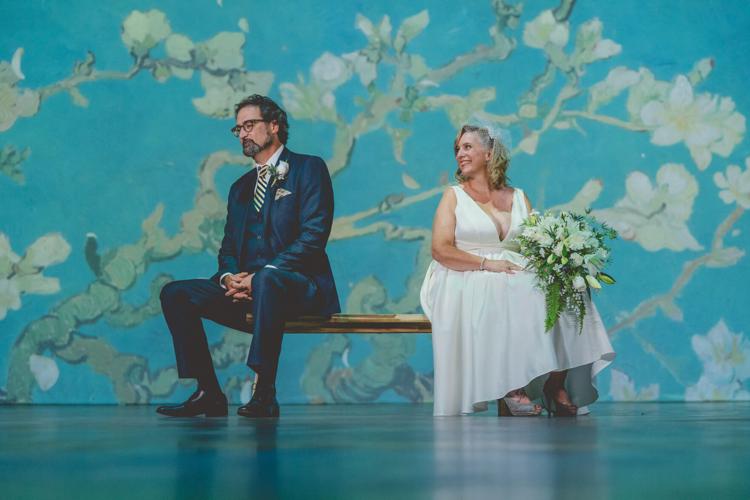 David Hudson and Deanna Walz found out a month ago that they won the wedding contest. 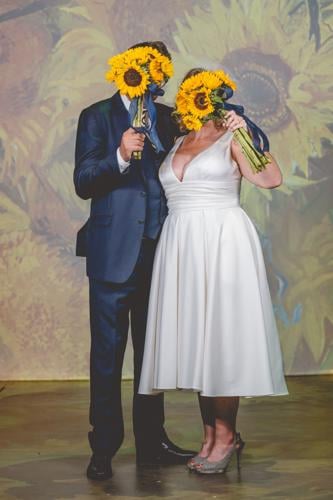 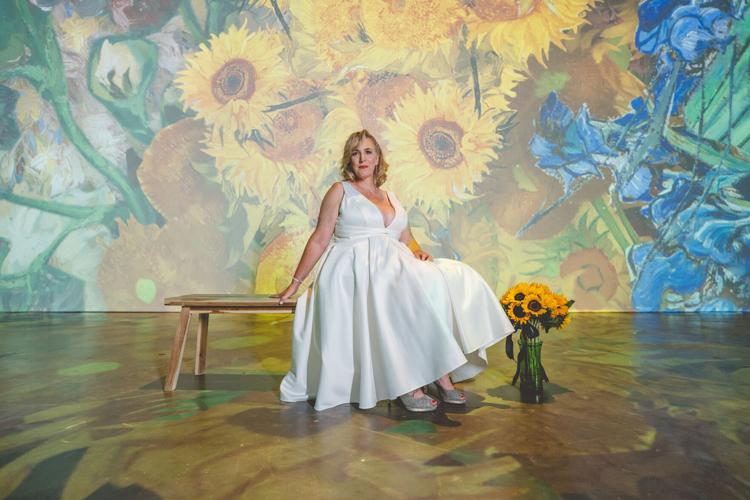 Deanna Walz and David Hudson won an all-expenses-paid wedding at the Beyond Van Gogh exhibit at the Mid-America Center in Council Bluffs. 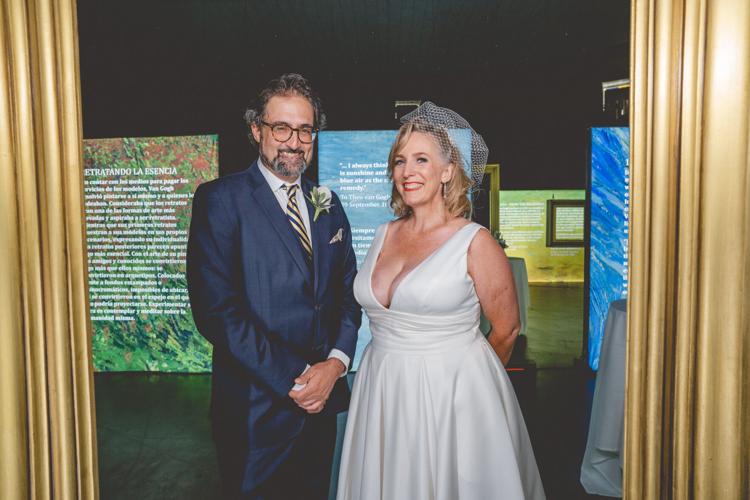 David and Deanna had been married before and have five children between them. 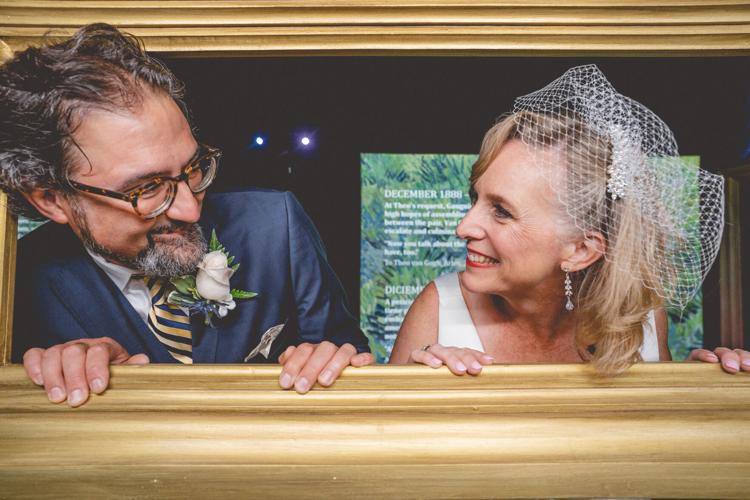 David and Deanna have some fun at the ceremony. 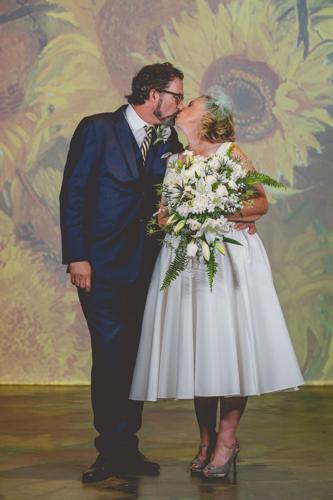 The couple were married just a month after finding out they'd won the contest. 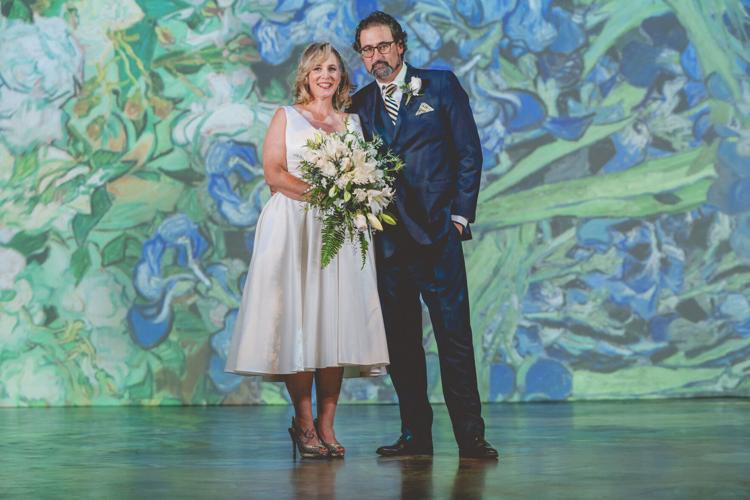 The couple is planning a party in October for guests who couldn't make the ceremony.

There was no Jell-O salad, as they had originally planned for their backyard wedding.

Instead, Deanna Walz and David Hudson enjoyed a ceremony they never could have imagined Wednesday evening at Beyond Van Gogh Omaha at the Mid-America Center in Council Bluffs.

The only thing similar to the backyard event that the Greenwood couple originally had scheduled for October was the flower images that covered every surface of the immersion room where the ceremony was held.

“It wasn’t your traditional throwing the garter, throwing the bouquet,” Deanna said. “It was fun. It was a whirlwind. It was beautiful.”

They won the all-expenses-paid wedding after submitting a video two months ago. They got a month’s notice of the event date, which Walz said wasn’t as stressful as it sounds since Beyond Van Gogh Omaha staffers Deborah Neary, Julie Lally and Nancy Slade did all the organizing.

They just had the hard part: cutting the guest list to the requested 50.

Purple Orchid Flowers provided the flowers, catering was done by Tish’s Restaurant and Sugar Makery made the cake. Their wedding finery came from David’s Bridal and Generation Tux. Photos were taken by Britton Hacke Photography.

They spent their wedding night at the Kimpton Cottonwood Hotel. Deanna just wishes she could have had another day to enjoy the clawfoot bathtub in their room.

“The vendors were wonderful,” David said. “We didn’t pay for it, and they worked very hard.”

As it was the second wedding for both, David said they might not have been the couple organizers expected. Deanna has three children and David two. All were at the ceremony.

There was no chance for a rehearsal, which David said he actually liked. A friend officiated and others did readings.

“It was sort of impromptu,” he said. “It didn’t have to be planned out and formalized. It was sort of a loving feeling. Knowing we were making it up as it went along actually took some of the pressure off.”

The couple brought a blank canvas and had all their guests paint a mark on it, creating an original piece of art from their wedding.

Deanna, who is director of development for Habitat for Humanity of Lincoln, and David, who works for Cedars Youth Services, had been dating for 6½ years.

“We met on Tinder, which is funny,” Deanna said. “Tinder doesn’t necessarily have the most positive record for long-lasting relationships. But when you are old, it works just fine.”

She said the coolest part of the day was seeing the reaction of the guests to the exhibit, which has been extended until Sept. 9.

But guests who didn’t make the ceremony don’t have to worry.

“We’re going to plan to have a big party at our house on the original date,” Deanna said. “We’ll eat all the salads; Jell-O salad, potato salad, macaroni salad, like you do at a backyard wedding.”

After seven years, two apartments and one city, Stephen Krotseng and Taylor Barstow became engaged. After replanning their wedding twice because of COVID, they were finally able to celebrate.

Omaha couple's wedding was all there in black and white

Trev Alberts finds the perfect bride for his son

The couple were married Oct. 30 and soon will be moving to Savannah, Georgia. Alberts' son, Chase, is a West Point graduate and a member of the U.S. Army.

It started as a joke but soon Sydney Norris and Logan Smolla were ordering paddleboards on Amazon.

There was nothing scary about Omahans' romance

The ceremony was outside and didn't require too many decorations, but the bride was aiming for rustic, vintage and colorful. The couple brought in mums for the altar and lined the aisles with pumpkins.

Tears still come too easily for a Nebraska mom and her husband when they think about those fraught months when both she and her newborn baby nearly died.

'Traditional with a twist': Couple has redone Country Club home from top to bottom

“We just fell in love with this old girl and thought she needed some love,” homeowner Elizabeth Skinner said.

$5 and a dream: Dutch colonial home in Mitchell goes on the move to start new life

The house was scheduled to be torched when the Piepers bought it for just $5. They’ve since spent more than $70,000 to prep it for moving, build a basement at its new home and to purchase new windows.

"We started texting from there and a week later we met for the first time in person and went on our first date. And as they say, the rest is history.”

While making one of their frequent drives to O’Neill, Brittany Soukup and Stephen Kotopka, had a special moment at the TK/Starlite Drive-In in Neligh.

Five dog friendly beaches in the U.S. your pup will love

Five dog friendly beaches in the U.S. your pup will love

David Hudson and Deanna Walz said it was a whirlwind event but also fun and beautiful. 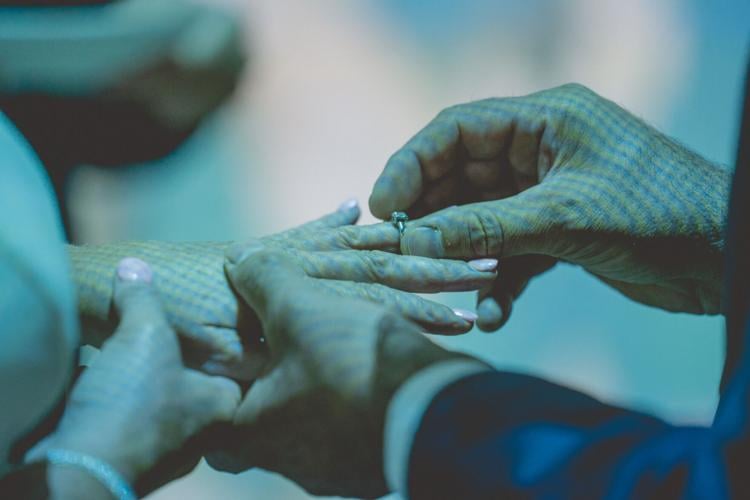 The couple exchanged vows before 50 guests.

The only thing they had to do for the wedding was write their vows and pare down their original guest list.

David Hudson and Deanna Walz found out a month ago that they won the wedding contest.

Deanna Walz and David Hudson won an all-expenses-paid wedding at the Beyond Van Gogh exhibit at the Mid-America Center in Council Bluffs.

David and Deanna had been married before and have five children between them.

David and Deanna have some fun at the ceremony. 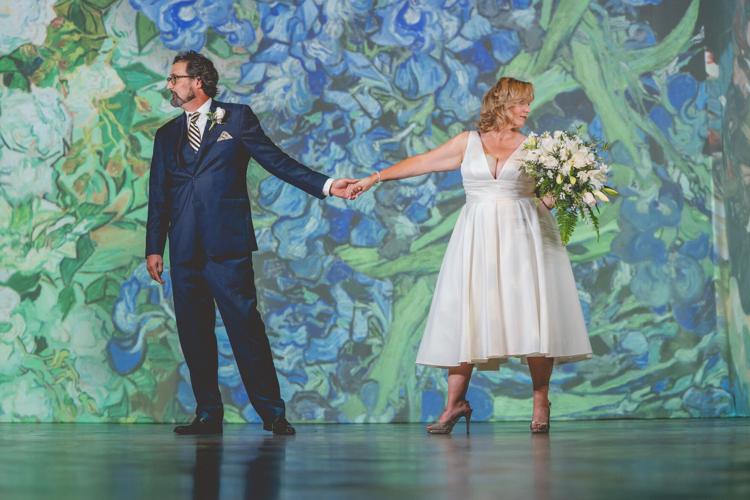 The couple visited the exhibit again Thursday they found it so beautiful.

The couple were married just a month after finding out they'd won the contest. 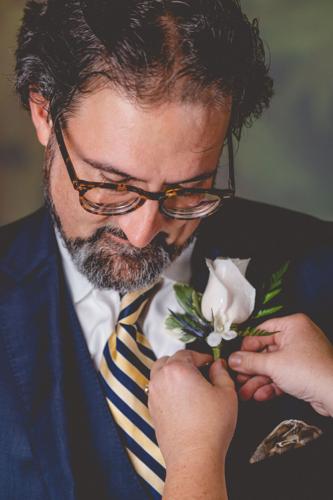 David gets ready to go.

The couple is planning a party in October for guests who couldn't make the ceremony. 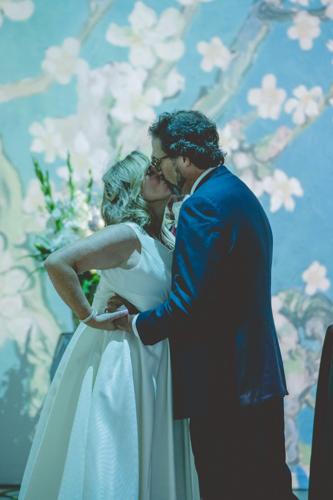