'A once-in-a-century milestone': Students, faculty eager for move to Creighton's new $84.5 million School of Dentistry building
0 comments
Share this
1 of 4 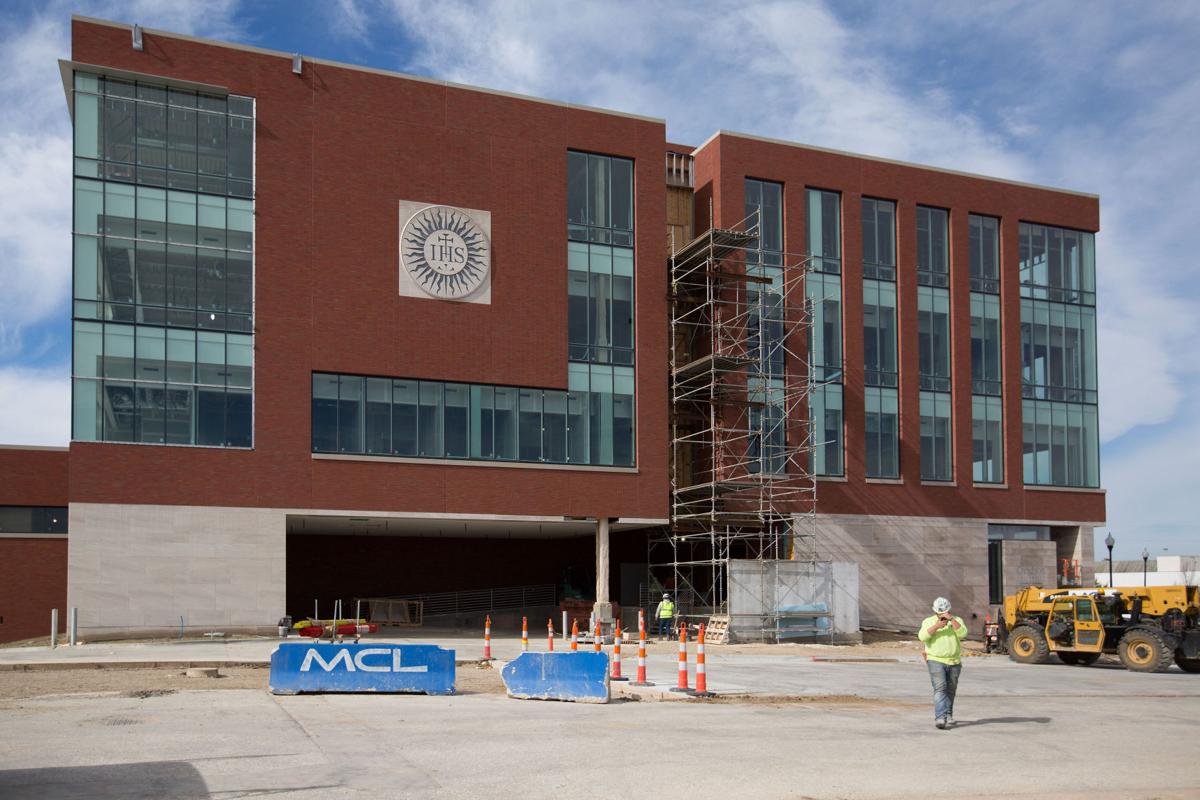 Faculty and students expected to move into the new Creighton School of Dentistry in July and receive a new dental class there in August. 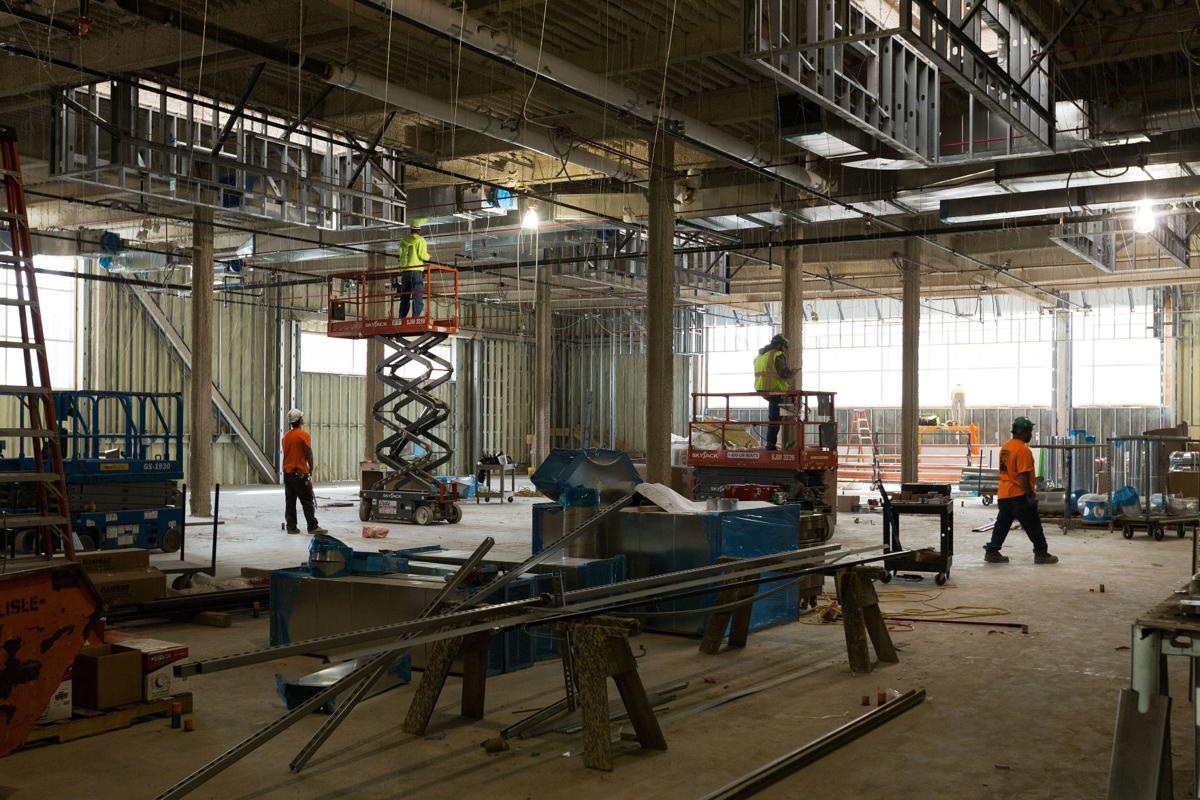 Construction workers work in the east side patient clinic area at what will be the new Creighton School of Dentistry on Oct. 25. 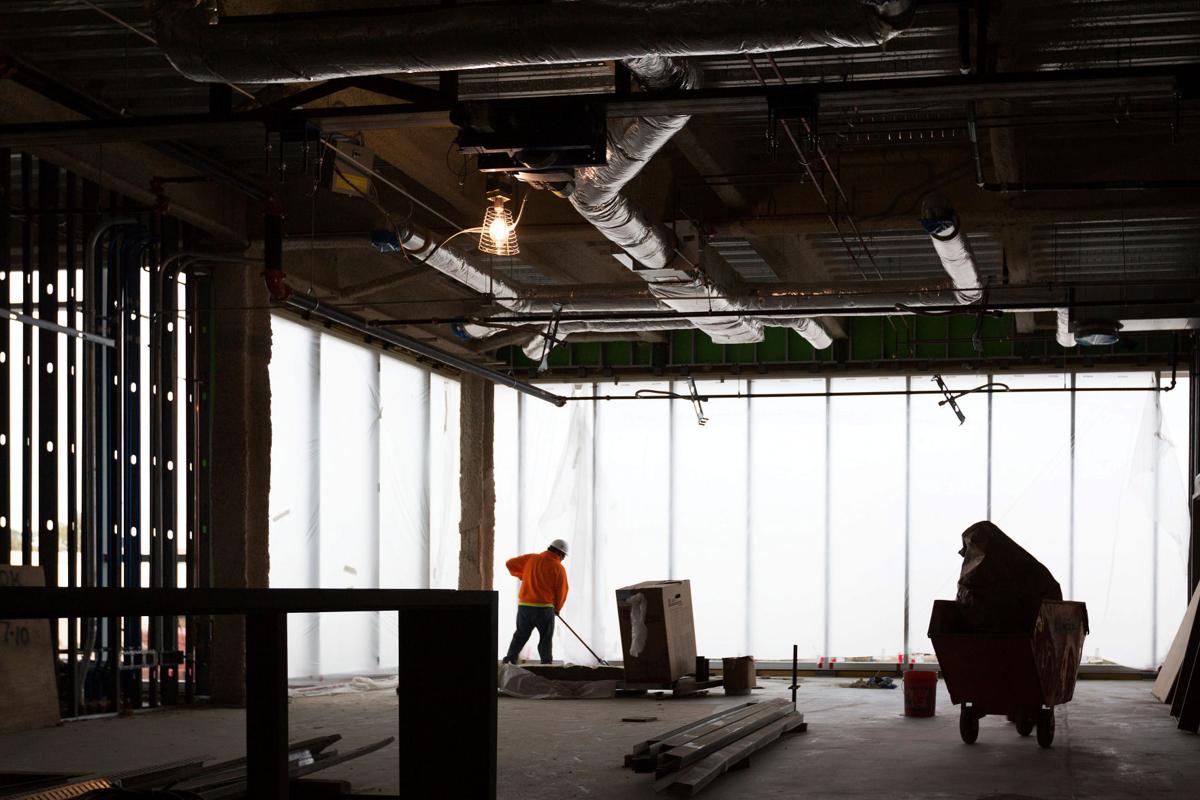 A construction worker cleans up an area that will be the small group classroom space at what will be the new Creighton School of Dentistry on Oct. 25, 2017. 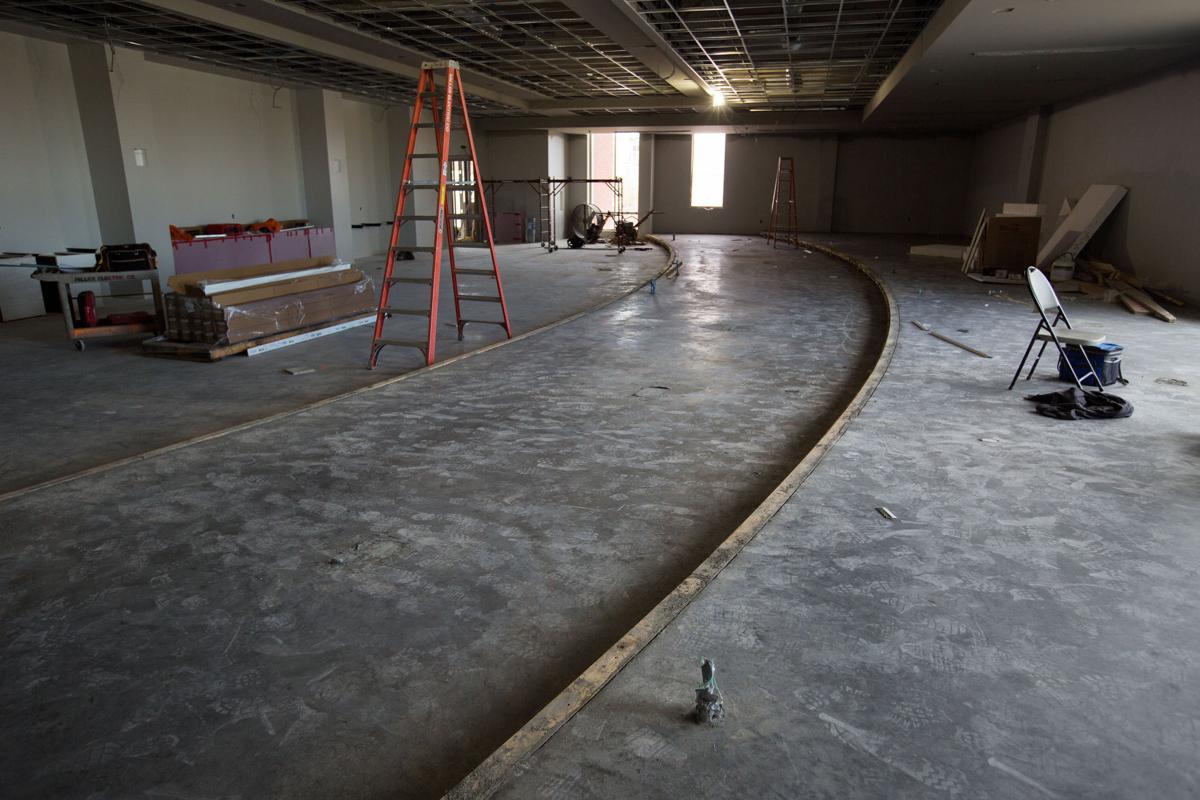 A large classroom space at what will be the new Creighton School of Dentistry.

A whirring in the huge building along Cuming Street sounded like a dentist’s drill, which is fitting since the facility will house dozens of dentists and dental students late next summer.

The whirring now is the sound of construction. Creighton University is erecting an $84.5 million School of Dentistry building at 2109 Cuming St. The red brick and limestone facility will give the dental school more room, a fresh look and feel, and new technology. And it’s expected to revolutionize the school.

“It’s a once-in-a-century milestone for our dental program,” said Dr. Mark Latta, dean of the Creighton dental school. “We’ve been trying to address our infrastructure needs since about 2003, 2004.”

Including a faculty garage in the basement and mechanical-equipment floor on top, it will be six stories and 267,000 square feet.

The dental school has operated for 45 years out of a building tucked away at 2802 Webster Plaza.

Latta said Creighton considered renovation, but the cost of doing so, expanding the building and dealing with the asbestos was prohibitive.

“It’s served us well,” Latta said of the old building.

Dr. Scott Radniecki facetiously described one of the elements of the old building.

“We have a few water features in the stairwells whenever it rains,” said Radniecki, an assistant professor of dentistry.

The dental school is buzzing over the new place. Second-year dental student Kevin Reardon said that on his first day of orientation last year, Latta announced that a new building would come to fruition. Up to that point, new dental students had only heard rumors.

“We’re all super excited about it,” said Reardon of Elmhurst, Illinois. “It will be so awesome to have the beautiful school to match the excellence of the program.”

Latta said the new building will enable the school to increase first-year dental enrollment from 85 students to 115. He said he also will increase his full-time-equivalent faculty members from 70 to 90.

He said Creighton has received $51 million in donations and grants for the building and is still fundraising. Short-term financing paid with the enrollment growth will cover the balance.

The federal Health Resources and Service Administration reported three years ago that there was a shortage of 7,300 dentists in the United States. The American Dental Association, however, said the dentist shortage is complex and requires further study.

The association said “there may be an insufficient number of dentists ... among disadvantaged populations or in certain geographic areas.”

Latta said the building’s location on Cuming Street and its broad windows facing north intend to invite north Omaha to use the dental school’s services.

Views in multiple directions, especially from the fourth floor, are impressive. To the south is the Creighton softball-baseball complex, to the southwest the Creighton campus, to the west the St. Cecilia Cathedral and the neighborhoods around it.

The University of Nebraska Medical Center College of Dentistry is based in Lincoln. UNMC increased its incoming dental-class enrollment to 51 this fall, up from 48.

At the moment, the new Creighton building has its skin in place but only a skeletal interior, with steel beams and poles shooting upward. Construction workers abound, some mudding the seams on the drywall.

The architect was RDG, and the general contractor MCL.

The new building’s features and services will include:

» a total of 152 simulation stations with mannequins and other practice technology, up from 24 simulation areas in the current building

» several patient rooms equipped for teledentistry (to assist remotely) and one special-needs operating room, with a wide entryway

» student relaxation areas and a chapel

» a children’s clinic with one “crying room” for emotional patients

» a cadaver lab with a fourth-floor view.

The building also will include a faculty practice area where professors will be able to remain in the building and work on their own patients. In the past, they’ve had to practice in offices in the community.

Recruiting professors can be challenging. An article this year in the Journal of Dental Education said that more than 335 positions were vacant in American dental schools in 2015-16 and that number was trending up.

Creighton’s Radniecki said the opportunity to practice privately in the building, and the new building itself, would help recruitment.

“It’s going to be an exciting time,” he said.

“My parents were both teachers, and I said never, ever in a million years would I be a teacher,” he said. He changed his mind with experience.

“I just enjoy the teaching side and the theory side of dentistry. ... I can’t imagine not teaching.”

The new building will include 182 “operatories,” or treatment areas, in all, up from the current 142. And research space will increase by 30 percent in the new building.

Creighton will be able to offer extended hours — to 9 or 10 p.m. — for dental emergencies.

In the nearby Harper Center, Latta and others have created precise mock-ups of adult and pediatric treatment areas.

The operatories are 20 percent bigger than those in the current building. The mock-ups helped Latta and his colleagues work out the spacing inside the bigger treatment areas.

They expect to move into the new building in July and receive a new dental class there in August.

Correction: This story was updated to correct the name of the architect.

Despite the popularity of urban living, the managing director of growth initiatives with Commercial Investment Properties says the Lincoln-based CIP also sees demand for the suburbs.

“He was a pioneer,” said daughter Carol Ryan of Chicago. “He was always dedicated to improving health care and advancing science.”

The piece will reflect the sky and earth around it, and the tones it emits will be affected by the gestures and movements of those standing next to it.

Where I Come From

'Where I Come From': Ambidextrous pitcher Pat Venditte

In the 12th episode of Season 2 of "Where I Come From" — a World-Herald podcast — host Dirk Chatelain sits down for an in-depth interview with Pat Venditte, the former Creighton pitcher who throws with both arms.

The title of the event is: “Media and Politics: President Trump and Journalism.” Topics will include bias, today’s political climate and the notion of “fake news.”

The nanofiber sutures that researchers are testing contain vitamin D, which is thought to be able to induce production of an infection-fighting peptide at the surgical site.

Former Creighton gym is now a pharmacy lab, but the hardwood lives on

Players used to dribble basketballs in Creighton University’s Vinardi Athletic Center. Pills will spill there from now on. But nobody wanted to see that gym floor, with maple on the top layer and Douglas fir supporting it as the subfloor, torn up and sent to a landfill.

Faculty and students expected to move into the new Creighton School of Dentistry in July and receive a new dental class there in August.

Construction workers work in the east side patient clinic area at what will be the new Creighton School of Dentistry on Oct. 25.

A construction worker cleans up an area that will be the small group classroom space at what will be the new Creighton School of Dentistry on Oct. 25, 2017.

A large classroom space at what will be the new Creighton School of Dentistry. 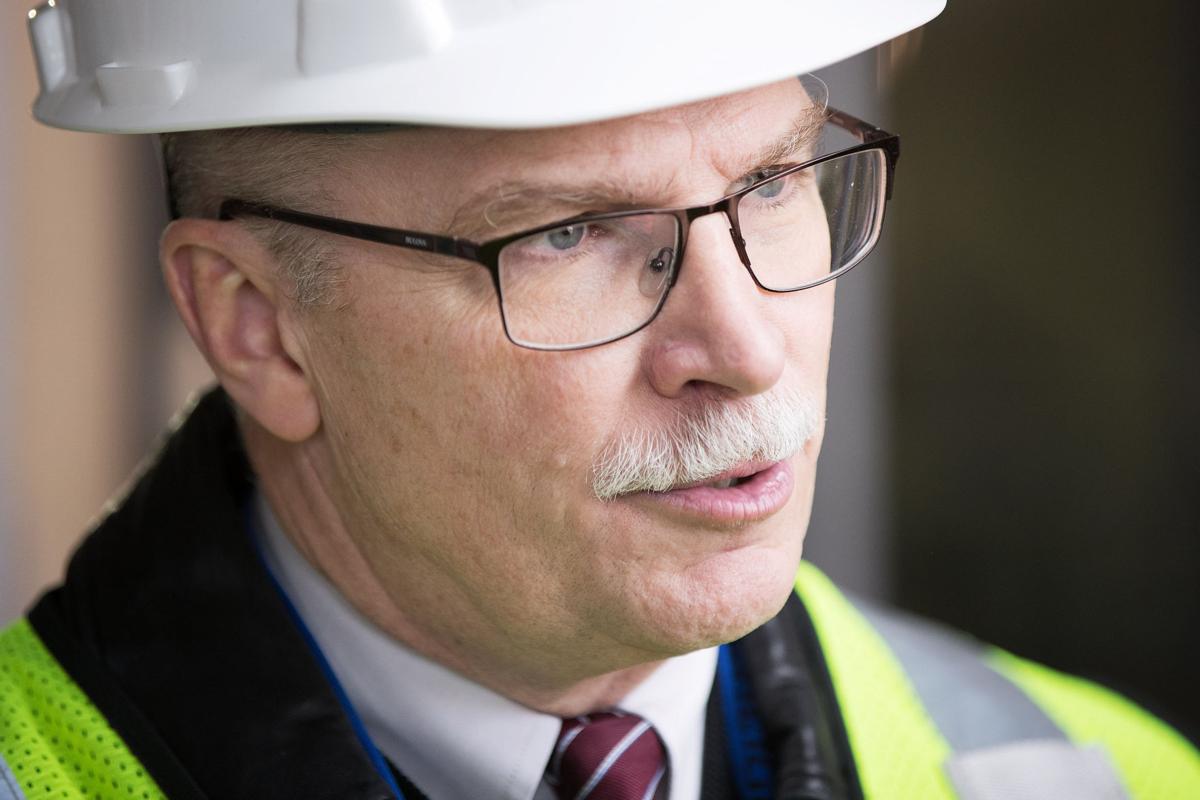 Mark Latta, Dean of the School of Dentistry at Creighton