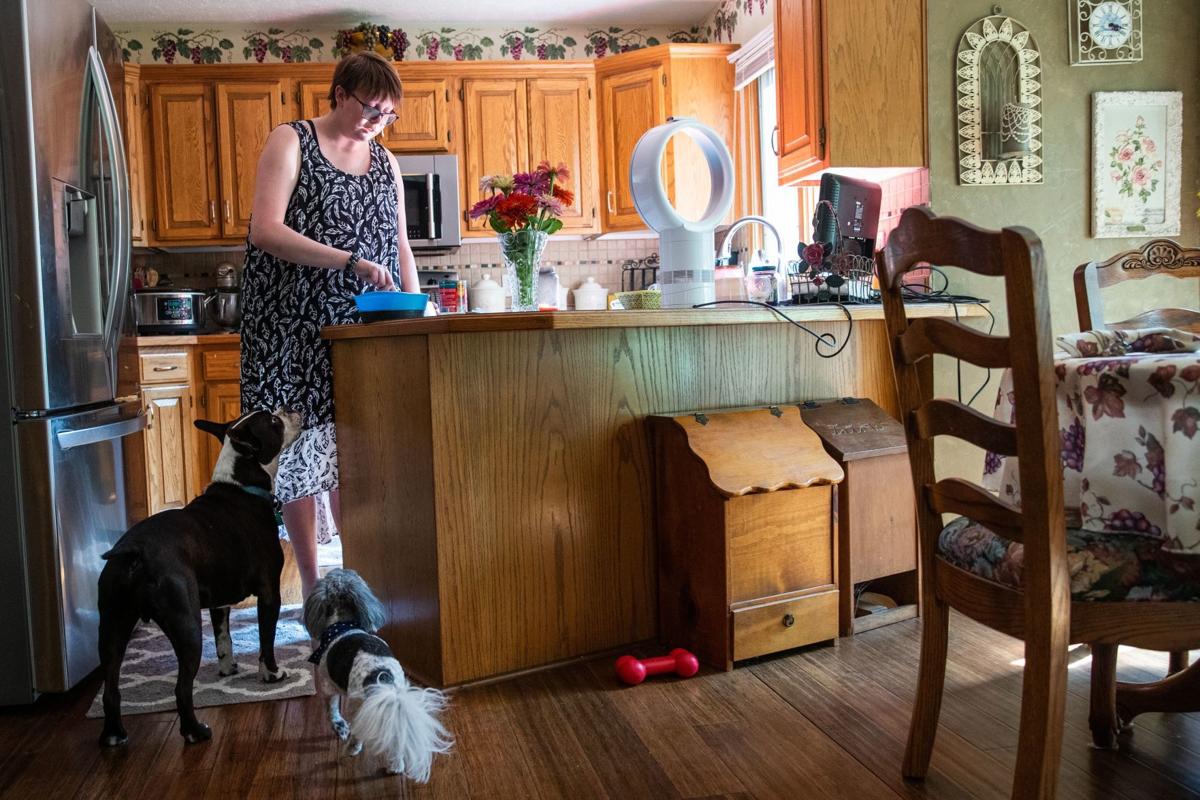 Erin Phillips, 31, feeds dogs Rocky and Bailey at her extended family home in Lincoln. She is a disability policy advocate for People First of Nebraska. 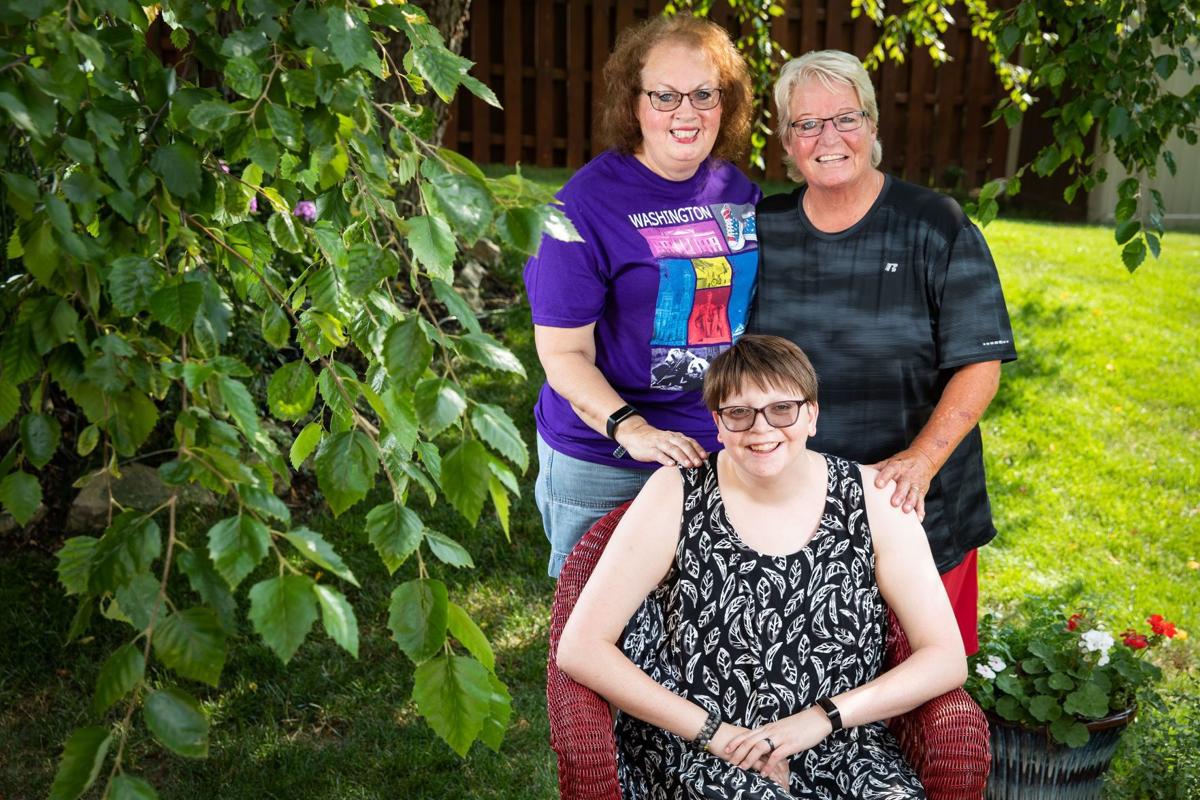 Erin Phillips, center, with Barb Fitzgerald, left, and Robyn Grotfeld at the Lincoln home where she lives. She moved out of her parents’ house three years ago and in with another family the state pays to help teach her life skills. Phillips does her own laundry and cleans her own bedroom and bathroom. She also works part time at a grocery store. 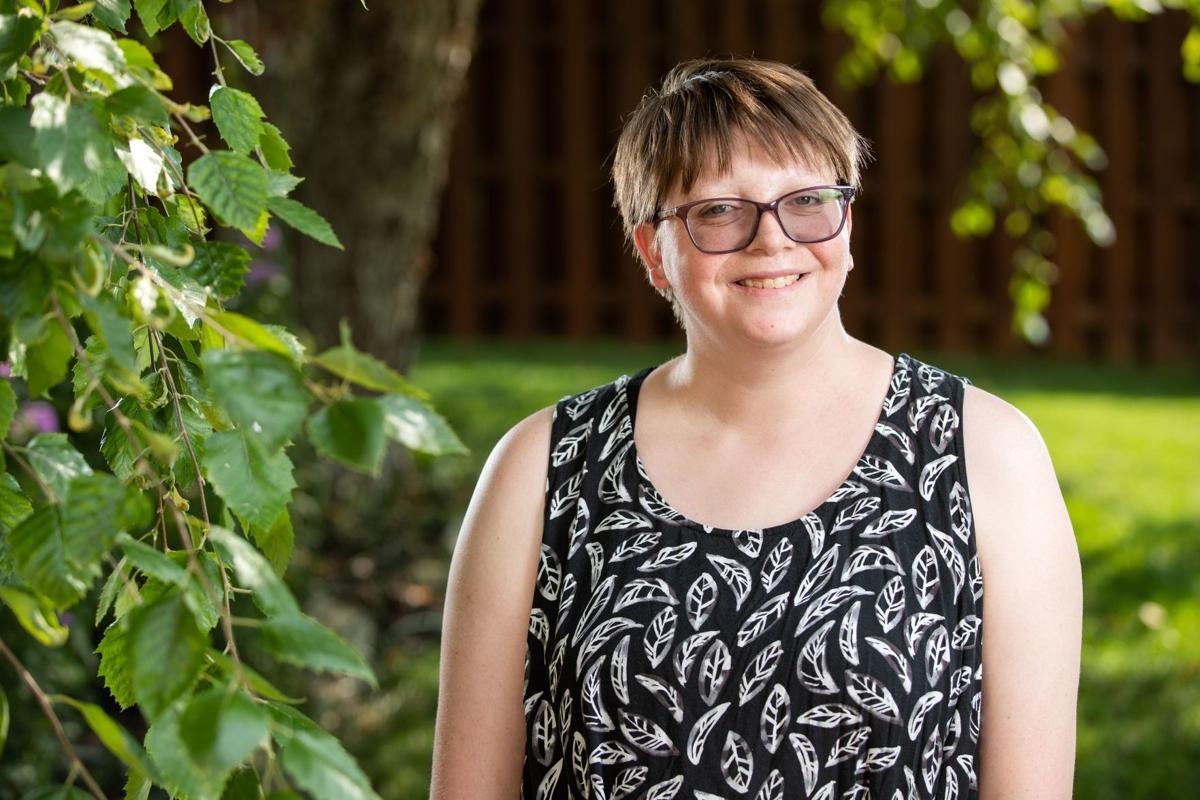 Erin Phillips, 31, is an advocate for people like her, who have developmental disabilities. Phillips works part time at Super Saver and is a disability policy advocate for People First of Nebraska.

LINCOLN — The young man worked at a veterinary clinic until his family moved to a new community. The young woman cleaned at a local restaurant before she had to move across town and could no longer get to her job.

Their developmental disabilities made it hard to find work in their new settings.

Vocational rehabilitation services could have helped them land new jobs and learn the ropes, while helping their new employers understand their abilities and needs.

Instead, the two are among more than 3,000 adults with disabilities on a waiting list for services from Nebraska VR, a division of the State Department of Education.

State Sen. Kate Bolz of Lincoln, who works as executive director of the Nebraska Association of Service Providers, recounted their stories. She said both now spend their days in a sheltered workshop, a work center for disabled people.

“Individuals who could be successful, contributing, employed members of our community are not receiving that opportunity,” she said.

State vocational rehabilitation officials started the waiting list in December 2017, when the agency began limiting new clients to those with the most significant disabilities. On April 23, 2018, the agency shut off all new clients.

Lindy Foley, director of Nebraska VR, said the agency continued working with people who already had a plan for services. The agency still can step in when people have jobs but need short-term help to keep them, such as providing hearing aids for someone who has developed hearing loss.

But other people can be served only if an existing client finishes services or drops out, she said.

By mid-June, the waiting list had grown to 3,183 people, even after about 200 got services last fall. At the end of June, another 300 were to be offered services.

“It’s frustrating when the people who are supposed to help you aren’t there,” she said.

First, a federal law that took effect in 2016 required vocational rehabilitation agencies to dedicate 15% of their funding for preemployment transition services for students with disabilities. The requirement left about $2.4 million less each year to serve adults.

Then federal officials sent Nebraska much less than expected of annual funds reallotted from other states. Officials sent the bulk of those reallotment dollars to Texas, as it struggled to recover from Hurricane Harvey.

The problem was compounded by a 2017 state decision to move about $1.7 million from developmental disability services into vocational rehabilitation, with the goal of boosting federal match money. The move meant more people turning to Nebraska VR for employment services at a time when funding decreased.

Money carried over from previous years helped fill the gap for a while. But as that money dwindled and the budget got tighter, the agency turned to the so-called “order of selection” to limit intakes. In addition, the agency put a freeze on hiring. Currently, 21% of positions are vacant.

“It was kind of a perfect storm,” Foley said.

This year brought another fiscal twist.

Under federal regulations, states must maintain their level of funding for vocational rehabilitation or face a penalty, Foley said. Using the carryover money temporarily boosted the state’s funding level. Now Nebraska faces the possibility of losing some federal dollars for not maintaining that amount of funding.

Bolz, meanwhile, argued that developmentally disabled people on the waiting list should be able to get employment services paid for by developmental disability services funds. That group makes up about a quarter of the VR waiting list.

Currently, they cannot get help either way. Developmental disability funds stopped paying for employment services after the 2017 funding shift.

About 20% of the state's prison inmates have serious mental illness, according to a 2016 estimate, and well over half deal with some kind of behavioral, mental health or substance abuse problem.

Medicaid expansion could reduce benefits to some 25,000 Nebraskans now on the program

Medicaid officials said the change is required because of the ballot measure approved by voters in November, which expanded Medicaid. State Sen. Adam Morfeld of Lincoln, who led the petition drive, disagreed, saying, "The state is choosing to add these unnecessary and expensive administrative requirements."

In particular, legislators questioned why the Department of Health and Human Services wants more money to implement the expansion, despite delaying the launch of services until Oct. 1, 2020.

To get full coverage, newly eligible Nebraskans would have to work, care for a family member, volunteer, look for work, or attend college or an apprenticeship.

“I think an organization that has a strong infrastructure can do any type of program,” says Dannette Smith, who took over as the chief executive officer of the Department of Health and Human Services last month.

A Lincoln Regional Center psychiatrist is claiming that violations of state rules and regulations affected the care of patients at the state mental hospital.

State officials will have to watch closely to see whether the increase in collections reflects a brightening state economy or just a temporary response to federal tax changes.

More than 2,300 Nebraskans with developmental disabilities on waiting list for services

Waiting for developmental disability services has been the norm for decades in Nebraska, despite a 1991 state law promising services for everyone needing them. State officials say that serving everyone now on the list would cost about $149 million, of which $71 million would be state funds.

Lincoln State Sen. Kate Bolz, a 40-year-old Democrat, would be the most formidable challenger to Rep. Jeff Fortenberry, a 58-year-old Republican from Lincoln, in several years.

Erin Phillips, 31, feeds dogs Rocky and Bailey at her extended family home in Lincoln. She is a disability policy advocate for People First of Nebraska.

Erin Phillips, center, with Barb Fitzgerald, left, and Robyn Grotfeld at the Lincoln home where she lives. She moved out of her parents’ house three years ago and in with another family the state pays to help teach her life skills. Phillips does her own laundry and cleans her own bedroom and bathroom. She also works part time at a grocery store.

Erin Phillips, 31, is an advocate for people like her, who have developmental disabilities. Phillips works part time at Super Saver and is a disability policy advocate for People First of Nebraska.