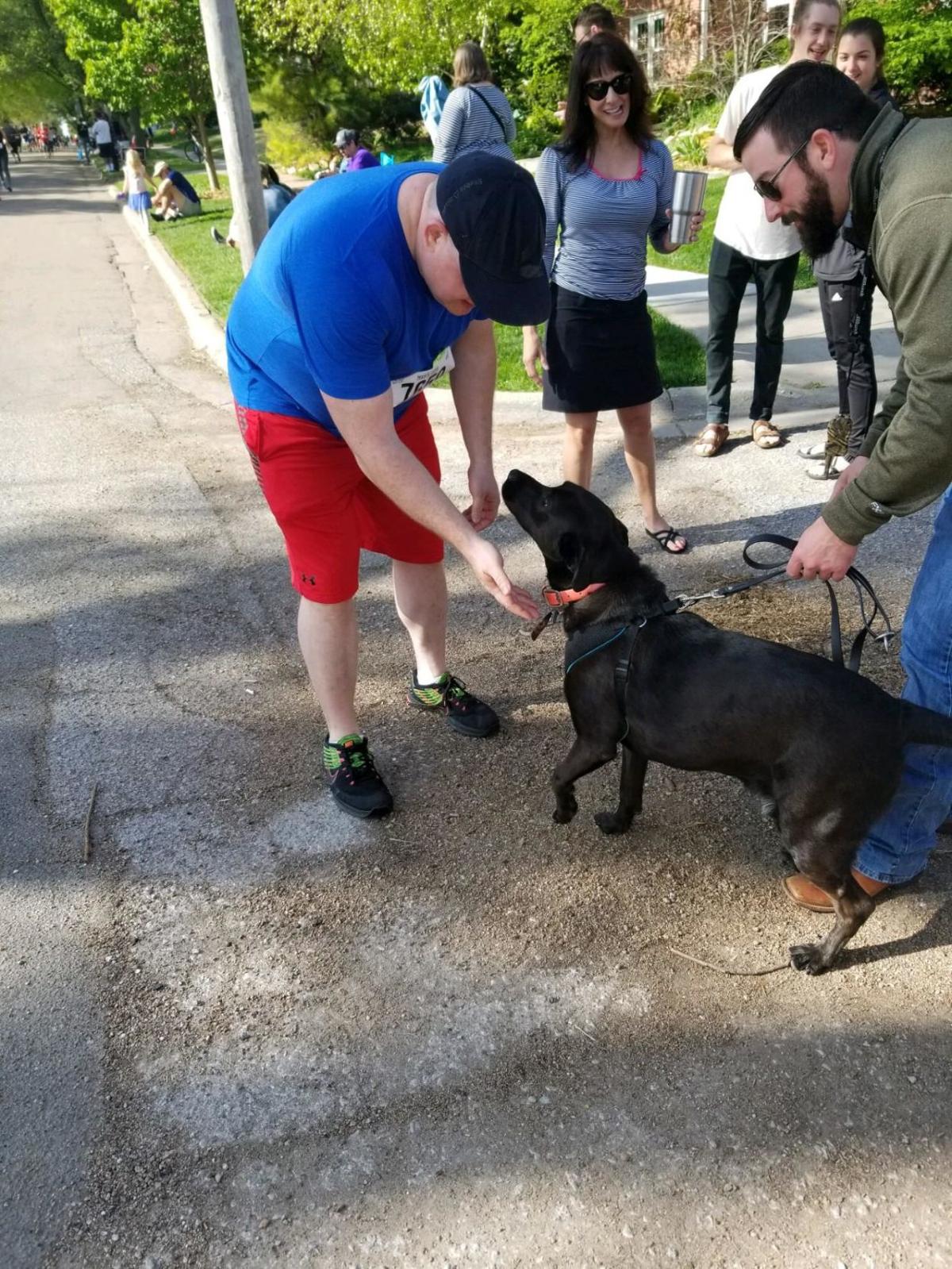 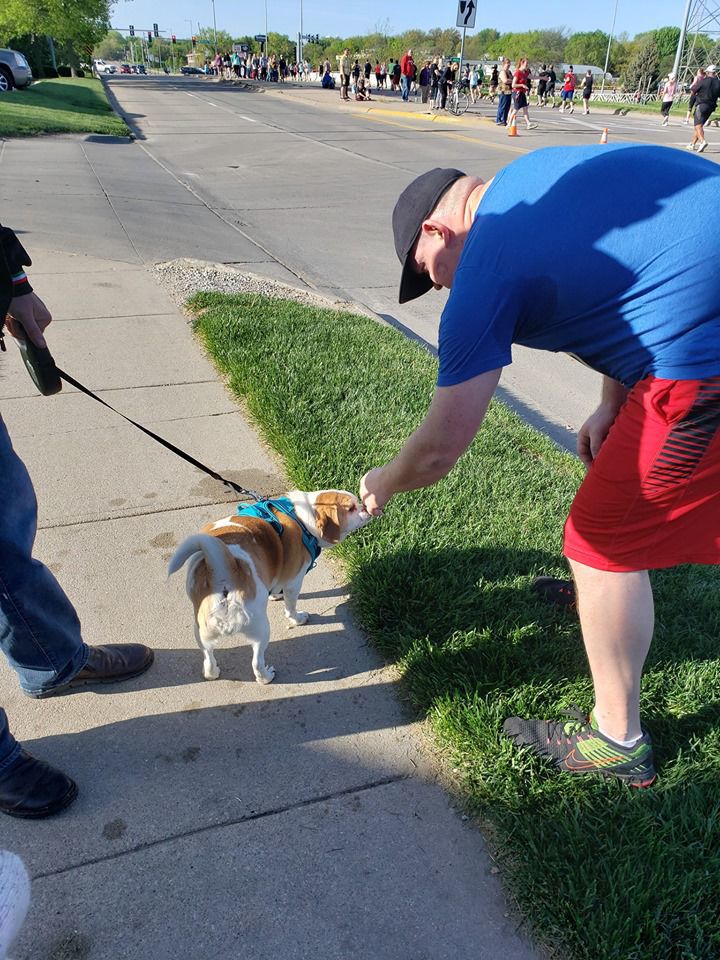 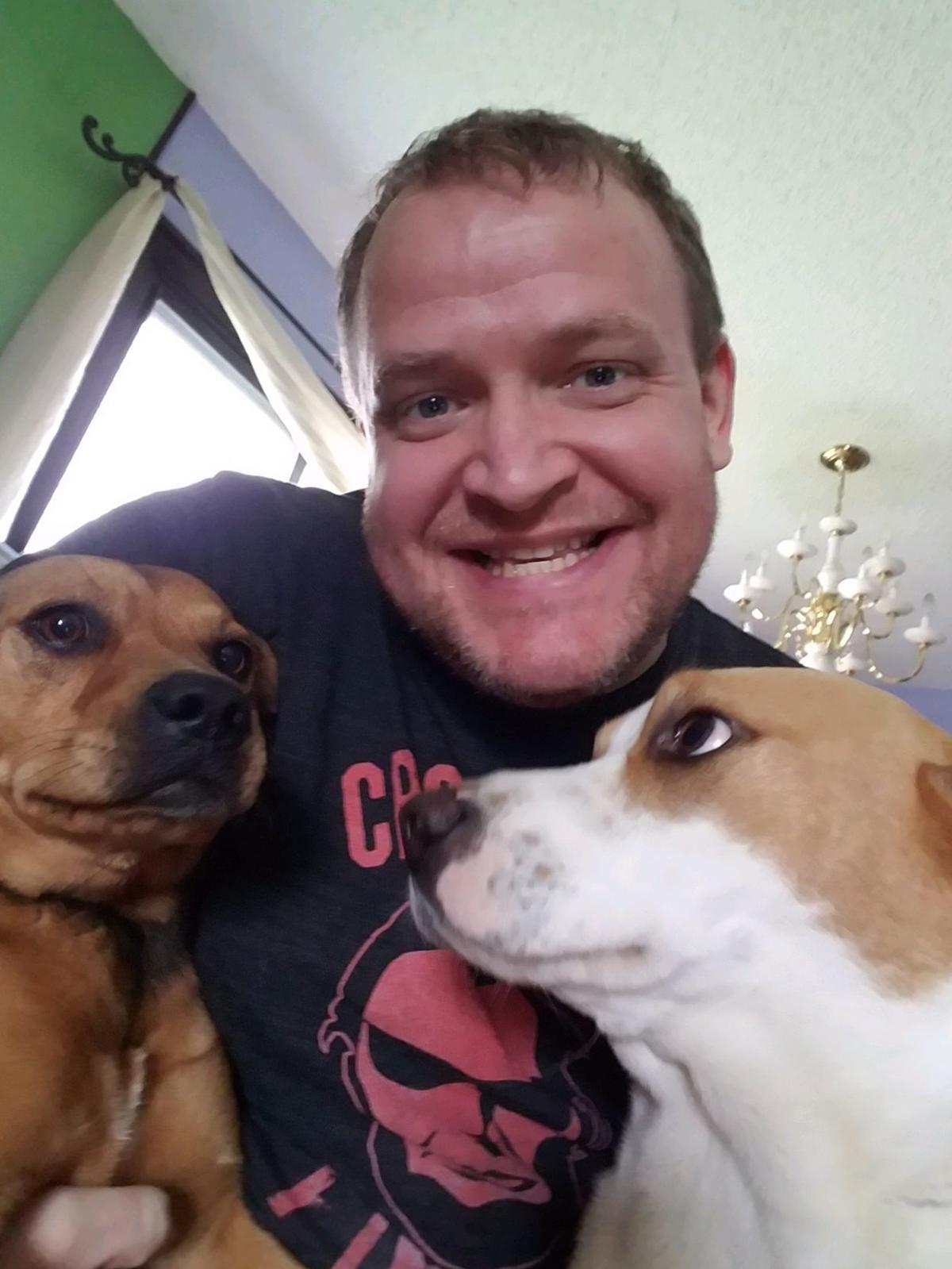 Mark Geist with his two dogs, Serenity and Temperance. Geist pet 200 dogs while running the half-marathon at the Lincoln Marathon.

First, there was Ollie.

Then came Maggie and Jake. Cooper and Lucy. Bella and Bruno.

The dog, a K9 for the University of Nebraska Police Department, was the final pooch to get pets from Mark Geist during this year’s Lincoln Marathon.

Geist, who ran the half-marathon on May 5, set out to pet 200 dogs along the course. He tackled it all — the pup petting and the race running — to raise money for Royal Family Kids’ Camp, which benefits children in foster care. He reached his goal of 200 dogs with about half a mile to spare, raising $3,000 in the process.

Big Day with the @LincolnMarathon ! Working it, Dad and I pretty much did the Halfsie and more importantly I was #200 for MARK GEIST!!!!!! #LincolnMarathon pic.twitter.com/SyXdPxXbPy

Geist, 38, thought of the fundraising endeavor a couple of weeks before the marathon. The Lincoln man pet pooches at last year’s race, too, but really it was because they gave him an extra boost. And 20 seconds of standing still felt nice. He finished having pet 88 dogs.

This year, he decided to add a charity element. Geist and his wife, Stefanie, have been volunteering for Royal Family Kids’ Camp for more than 13 years. The nonprofit hosts weeklong summer camps across the country for foster children ages 6 to 12.

The Geists help with a camp serving Lincoln, Grand Island and York.

This year’s session will accommodate 59 campers. There’s no cost for kids to attend the camp, but volunteers typically raise about $600 per camper to cover the costs.

Geist shared his fundraising plans on his Facebook page, and told some family, friends and coworkers. Some folks chose to pledge a certain dollar amount per dog he pet. Others pledged flat donations.

When Geist started the half-marathon, he spotted his first dog, Ollie, about 50 meters in. Every few hundred meters, he would spot more dogs.

He followed a standard procedure for petting. First, he asked the owner’s permission. Then he let each dog sniff the back of his hand before proceeding with pets. Sometimes he explained his mission, sometimes he didn’t. But he let each dog and human know what number they were in his growing tally.

Geist spent about 30 seconds with each dog. Geist, who said he’s not a competitive runner, didn’t mind taking the extra time. He used caution in stepping over to the sides of the race course, so he didn’t interfere with any other runners.

Geist said he had pet 175 dogs by the time he reached mile 11 or 12. His calves were aching and cramping. He could see the muscles moving and squeezing under the skin on his right leg. It hurt to jog more than a few feet. And he was seeing fewer and fewer dogs.

By the time he was approaching the finish line in Memorial Stadium, he was at 199 dogs petted. But there was only about half a mile left. He was surrounded by concrete, and there were no pups in sight.

“It was so dramatic,” Geist said. “I knew there was no way. Once I turned that corner to run along the side of the stadium, I know there’s no dogs there.”

Then he heard someone shout his name. “Mark! Mark!”

He saw former gym buddy Russell Johnson waving him over. As Geist approached, he saw Johnson, an officer with the University of Nebraska Police Department, point down. Sitting at his feet was Layla, a Belgian Malinois mix.

Geist, sporting a ball cap, kept his head down. He was fighting back tears. With a pet planted on Layla’s head, he met his dog petting goal.

He rounded the corner and headed toward the finish line when he met another buddy. This one offered to donate the remaining $600 of Geist’s $3,000 goal.

That’s when the elation hit.

“Petting dogs was fun. I do love dogs,” said Geist, who has two pups of his own. “Really, ultimately, I was thinking about the kids.”

As for Layla, she was “pretty stoked” to be the final dog, Johnson said.

Johnson knew about Geist’s endeavor, but when he spotted him about a half-mile from the finish line, he didn’t know Layla would be dog No. 200.

Johnson called him over.

“There’s a lot of people who said (seeing the dog is) an extra boost,” Johnson said. “It means that much more that I knew Mark. Knowing that it helps him, being someone who was doing this for a good cause, to help him finish that out was pretty cool.”

The best dog breeds to train as running buddies

A revealing finish: Omaha couple find out gender of 2nd baby at end of Lincoln Marathon

Stephanie Herr, 29, signed up for the race’s half marathon a few days before finding out she was pregnant. The timing lined up that she and her husband could find out the gender on race day.

Sidelined by amputation and cancer, runner will serve with 'vital' volunteers at Lincoln Marathon

Volunteers have been "vital" in helping Angela Sullivan snag a medal at the end of the 26.2 miles, she said. The high-fives, smiles and funny posters keep Sullivan motivated. This year she's happy to join their ranks in Lincoln.

Want to run with Fido​? A guide to training your dog

People can log miles on the treadmill during winter months, but the odds are high that Fido doesn't have a gym membership to do the same. When training man's best friend as a running buddy, start slow.

The Nebraska Humane Society flew 93 of its adoptable felines to Seattle on Friday. The cats will go to a handful of shelters in the Pacific Northwest to be adopted out.

The program uses golden retriever puppies, and a new batch is almost ready to visit Grand Island. Volunteers are needed to help with the approximate year-long training.

The lawsuit accuses UnitedHealthcare of wrongly denying coverage for a life-saving prostate cancer treatment to potentially thousands of men. The judge survived prostate cancer in 2017 and strongly considered undergoing this same therapy.

Iowa dogs quarantined after officials detect a vicious disease. Humans could be at risk, too

A small-dog commercial breeding facility in Marion County, Iowa, is the source of "multiple cases" of a canine disease that can be transmitted to humans, the state's agriculture department said.

If you get blisters when you break out the sandals and hiking boots, we've got advice

Here's a primer on what blisters are, how to prevent them and how to treat them.

The purpose of the fund drive is to encourage many people to make donations, with the minimum amount being $10.

Running-related blood clots can happen, but they're rare. Here's how to prevent them

Runners who fly to and from races face increased risk. Other things that increase risk of clots include long-distance running, birth control pills, pregnancy, smoking and genetics.

When he’s on duty, Radar is all business. Sporting a bright red vest and a harness that rests across his snout, the pooch can activate light switches, pick up a dropped credit card from the floor or comfort Sharon Boehmer if he sees that she’s in distress.

Cats get their own film festival at Alamo Drafthouse. Tickets on sale meow

"People get the experience of falling in love with cats all over again with a like-minded community."

Omaha's 3 marathons fall on 3 consecutive weekends. Can runners keep up in the long run?

It isn’t unusual in larger cities to see marathons stacked one after another on the running calendar, said Rich Harshbarger, CEO of Running USA, a national trade association. But it’s surprising to see the stacked marathon schedule in a market like Omaha, with fewer than a million people in its metro area, Harshbarger said. Especially in light of race registration numbers dropping nationally.

Lincoln Marathon returning to an in-person race this May

The 2021 Lincoln Marathon is scheduled for May 2. It will include a virtual option for runners who prefer to race on their own.

Marla Rhoden, a former Lincoln Marathon winner, will run the half marathon on Sunday as a way to get back into running after experiencing a host of health issues.

The Bellevue Police Department will use a goldendoodle to serve as a therapy dog to offer emotional support to officers and residents during traumatic events.

Mark Geist with his two dogs, Serenity and Temperance. Geist pet 200 dogs while running the half-marathon at the Lincoln Marathon.