'It takes less than a second': Man who lost hand in Omaha fireworks accident urges caution
0 comments
Share this
1 of 3 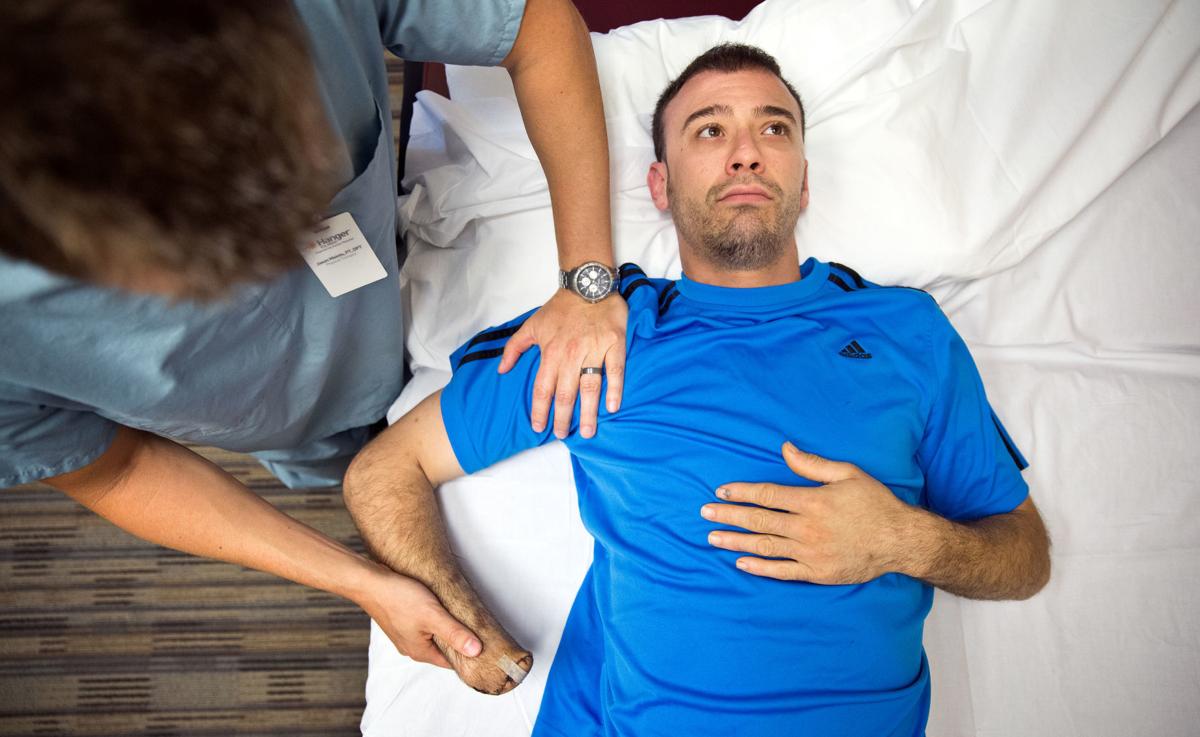 Dr. Jason Meints guides Jared Spencer through a set of stretching techniques in 2014. Spencer, who lost his right hand in a fireworks accident, is now working as a mechanic in Texas. 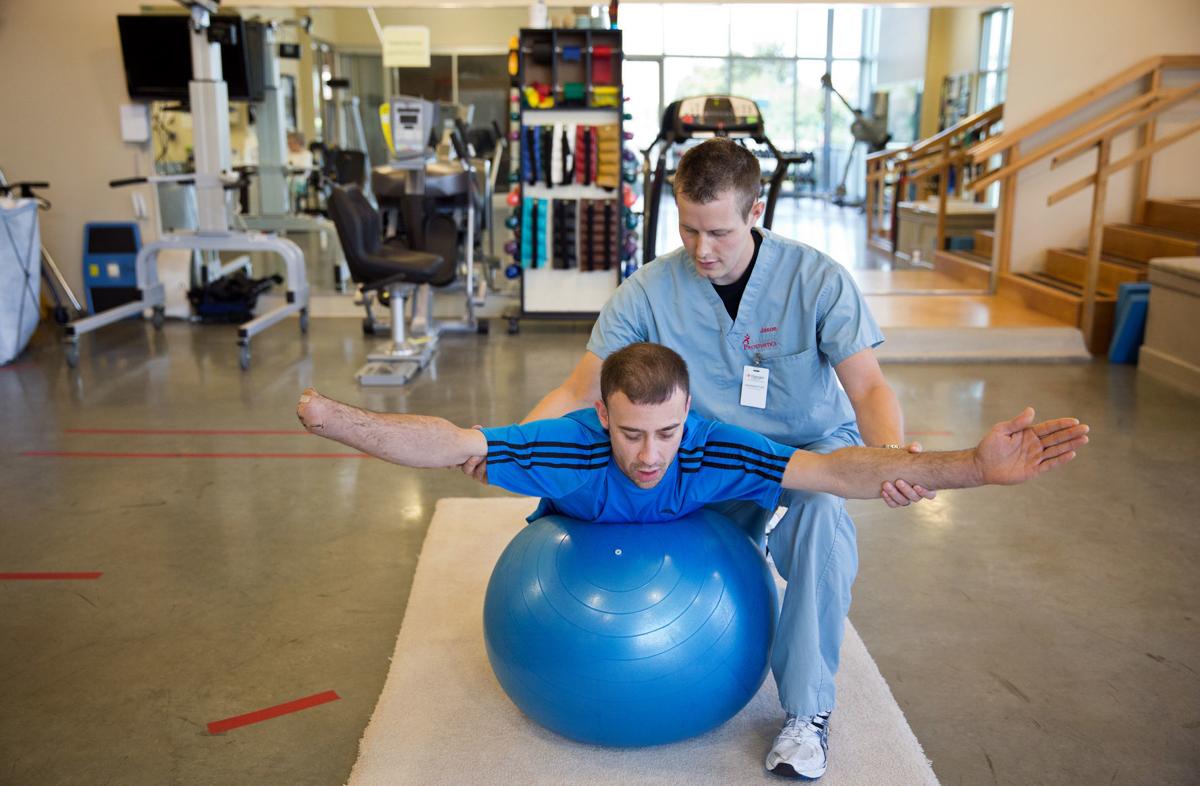 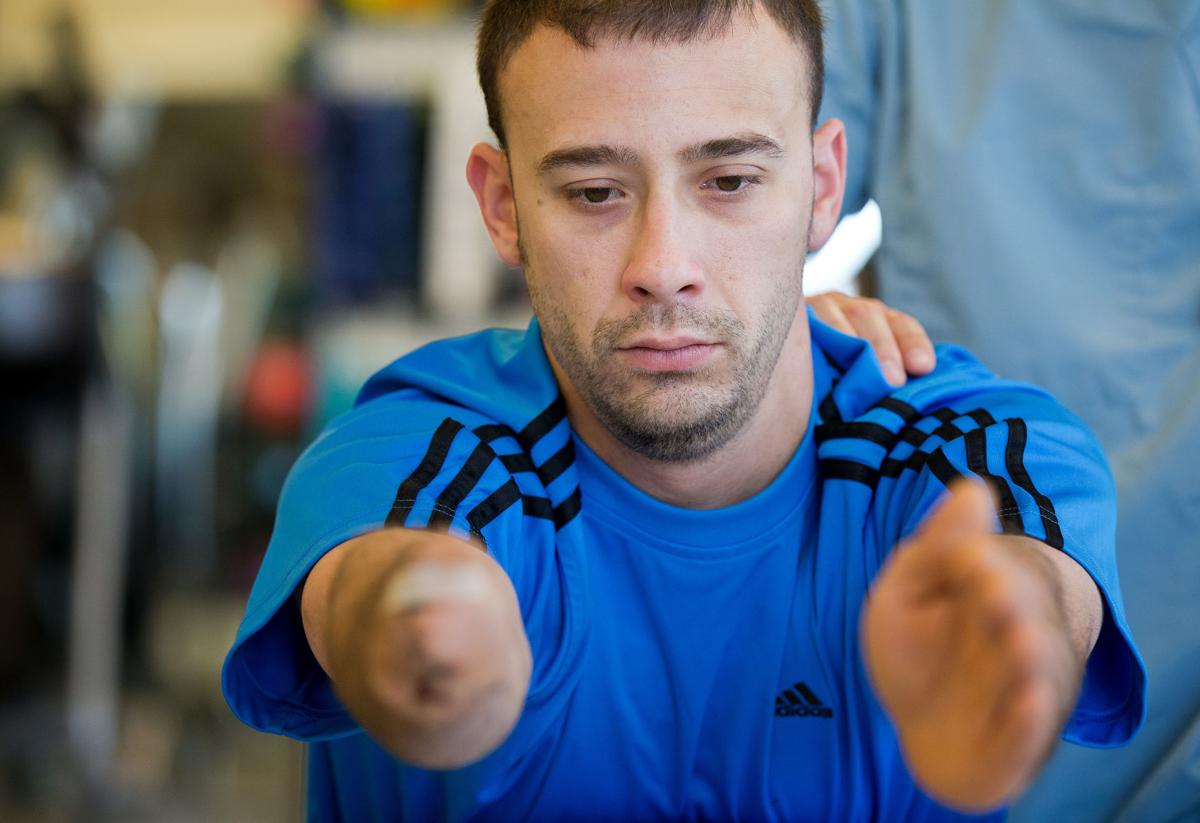 Jared Spencer performs isometric exercises at the Hanger Clinic in 2014. His recovery as a person took years. After the accident, he spent two years on disability, battled drug addiction and nearly lost his marriage. But that’s all behind him now, and he likes to share his story.

When Jared Spencer shows up to a Fourth of July party, people take a little extra caution around the fireworks.

Spencer’s right hand was blown off five years ago in a fireworks accident at a holiday party in northwest Omaha.

In his recovery, Spencer battled depression and addiction. Now 36, he’s turned things around. He no longer uses drugs. He’s back to work as a mechanic in Frisco, Texas, where he and his wife, Jessie, now live.

Spencer’s best advice for holiday celebrations: Be safe, skip the illegal fireworks and don’t light any fireworks in your hand.

“I don’t want this to happen to someone else,” he said.

Last year there were an estimated 9,100 fireworks-related injuries treated in U.S. hospital emergency departments, according to the Consumer Product Safety Commission. The bulk of fireworks injuries affect hands and fingers (28% of injuries), followed by the legs (24%), eyes (19%), and head, face and ears (15%), the commission says. Trunk and arm injuries make up the rest. More than 40% of the injuries are burns.

Omaha-area hospitals in 2018 treated more than 30 patients for fireworks-related injuries.

Spencer’s accident happened quickly, he said, but he still remembers it clearly. He held the fireworks — with the power of a quarter-stick of dynamite — in his hand. It exploded as soon as it was lit.

The force knocked Spencer to the ground. He tried pushing himself up and realized that the explosion took his right hand with it.

“It looked like wet spaghetti,” Spencer said of his arm.

He was losing blood. His lips had a blue tint to them. He was slipping in and out of consciousness while waiting for the ambulance. That’s when the pain set in.

When The World-Herald talked to Spencer weeks after the accident, he was slowly adjusting. He encountered phantom pain and waited to be fitted for a prosthesis. Spencer hoped that damage to his right eardrum wouldn’t lead to permanent hearing loss.

He got a prosthesis about three months after losing his hand. He went back to work as a mechanic shortly after but wound up quitting. It was hard to use the prosthesis and harder still to do his job.

Then he got into outpatient rehab programs. He stopped using drugs. He started spending more time with his wife and family.

“I learned I had to fix myself before I could go ahead,” Spencer said.

Eventually, he started to tinker with his wife’s car. He started getting more proficient at using what he refers to as his “nub” and was able to tackle some jobs that typically require two hands. He started doing some repair work on the side, fixing brakes and doing suspension work.

Last year he moved to Frisco, Texas, to be near his father.

He applied to a few mechanic shops, but he suspects he was denied because of his hand. But one shop took a chance on him.

Some of his tools are battery powered, so he needs to use only one hand. Other times he’ll use what’s left of his right arm, or a shoulder, to steady parts. He can tackle most repair jobs, but rear drum brakes are like his “kryptonite.” In those cases, his co-workers will step in to help.

At home, putting on socks, tying his shoes and buttoning a shirt — tasks he struggled with shortly after the accident — are things he can do with ease now.

One of the few things he struggles with is striking something with a hammer. Spencer, who was right-handed, is still working on his penmanship.

“I push myself to see what I can do,” Spencer said. “If I can’t, I try harder and harder until I can do it.”

He doesn’t use his prosthesis and has slight trouble hearing.

Spencer said he’s always loved fireworks and the Fourth of July. The year of his accident, he spent nearly $1,000 on fireworks. Since then, he’s stayed away from any illegal devices and watches professional shows.

This year, though, he plans to put on a show to honor his father, who recently died. But Spencer said he’s sticking to fireworks sold legally. And, per his wife’s rule, he won’t be lighting any.

Spencer said he likes to share his story, because he wants other people to be safe.

“It takes less than a second for it to happen and boom. There’s no turning back,” Spencer said.

Johnny Ray Knight, 28, died after suffering critical injuries to his chest when the shell went off near 42nd Street and Ames Avenue.

Fireworks limited to 3 days this Fourth of July in Omaha; today is first day to light them

Under an ordinance passed unanimously by the Omaha City Council last September, Omahans will have from July 2 to July 4 to light off fireworks in the city. That’s shorter than last year’s 10-day season.

Fireworks injure lots of people. Use your head so you're not one of them.

Fireworks sales start Friday in Omaha, but people can't legally discharge them in the city until noon Tuesday.

Urinary tract infections are one of the most common ailments women encounter, with at least 40% to 60% getting one during their lifetime, according to the National Institutes of Health.

Traveling over the July Fourth holiday? You won't be alone

AAA is predicting that 48.9 million people will travel during the five-day holiday period. That number is up about 2 million from last year and the highest number AAA has recorded since it began tracking travelers in 2003.

Editorial: Enjoy the Fourth but use fireworks responsibly

Home fireworks, even sparklers, can be dangerous if not handled properly.

Summer 2019 events: Festivals big and small in and around Omaha

8 Fourth of July events in the Omaha metro area

Ready to celebrate the Fourth of July? Here is a sampling of local Independence Day celebrations.

The friend said there was blood on Johnny R. Knight's face and his fists were clenched tight, but she couldn't tell where he was injured. When he was rolled over, a gaping chest wound was found.

Majority of residents are calling nonemergency number for fireworks complaints, helping free up 911

Tuesday was the first day this year Omahans were legally allowed to light off fireworks, so complaints weren't flooding 911 operators — at least until the 11 p.m. cutoff.

An Omaha man "mangled" his hand in a fireworks-related mishap this week, police say. His injury was one of several in the Omaha area, including burns and eye wounds, that occurred over the Fourth of July holiday.

At 21, she became her mother's caretaker. Now, she honors mom at Walk to End Alzheimer's

Alison Griffin-Hunter has participated in the Walk to End Alzheimer's every year since her mom's diagnosis. This will mark her first walk in Omaha since moving here from California.

City Council members agreed to open discussions once again on potential changes regarding La Vista’s current fireworks ordinance. It will be a topic of discussion at the Tuesday meeting.

Fireworks complaints in Omaha are up 61% compared to June 2019. Stressed-out dogs, people unable to sleep and veterans rattled by PTSD have been the result.

Fireworks-related injuries reported in the Omaha area ranged from burns to the hands and face to serious hand injuries resulting in the loss of fingers.

Dr. Jason Meints guides Jared Spencer through a set of stretching techniques in 2014. Spencer, who lost his right hand in a fireworks accident, is now working as a mechanic in Texas.

Jared Spencer performs isometric exercises at the Hanger Clinic in 2014. His recovery as a person took years. After the accident, he spent two years on disability, battled drug addiction and nearly lost his marriage. But that’s all behind him now, and he likes to share his story. 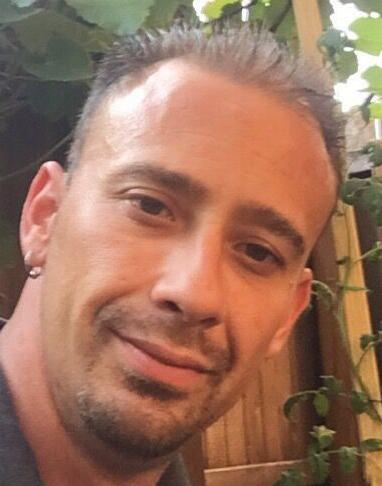