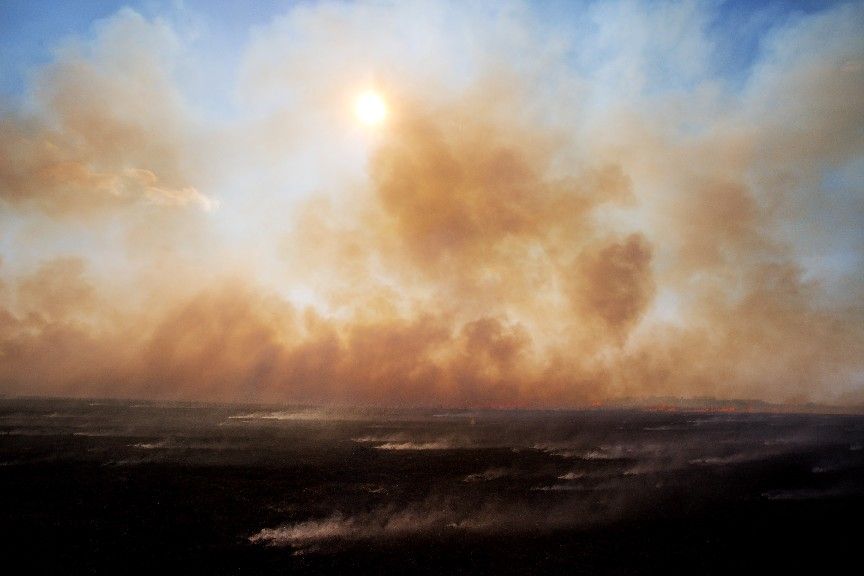 Smoke fills the air as a pasture is burned in eastern Kansas in 2016. Ranchers do controlled burns to kill off weeds, and southerly winds carry the smoke to Nebraska. More photos. 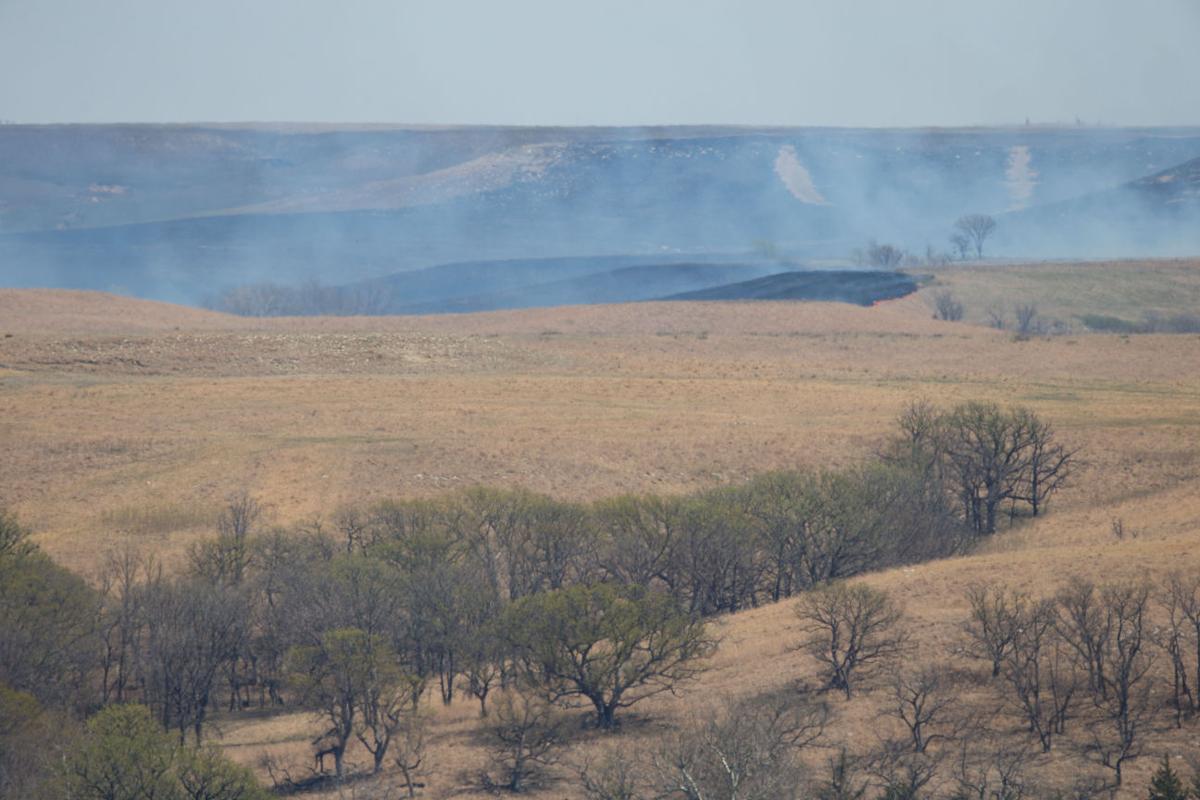 Grass burns on Thursday north of Manhattan, Kansas. Strong winds have been pushing the smoke from prairie-grass burn-offs in Kansas into eastern Nebraska and western Iowa for the past few days. More photos. 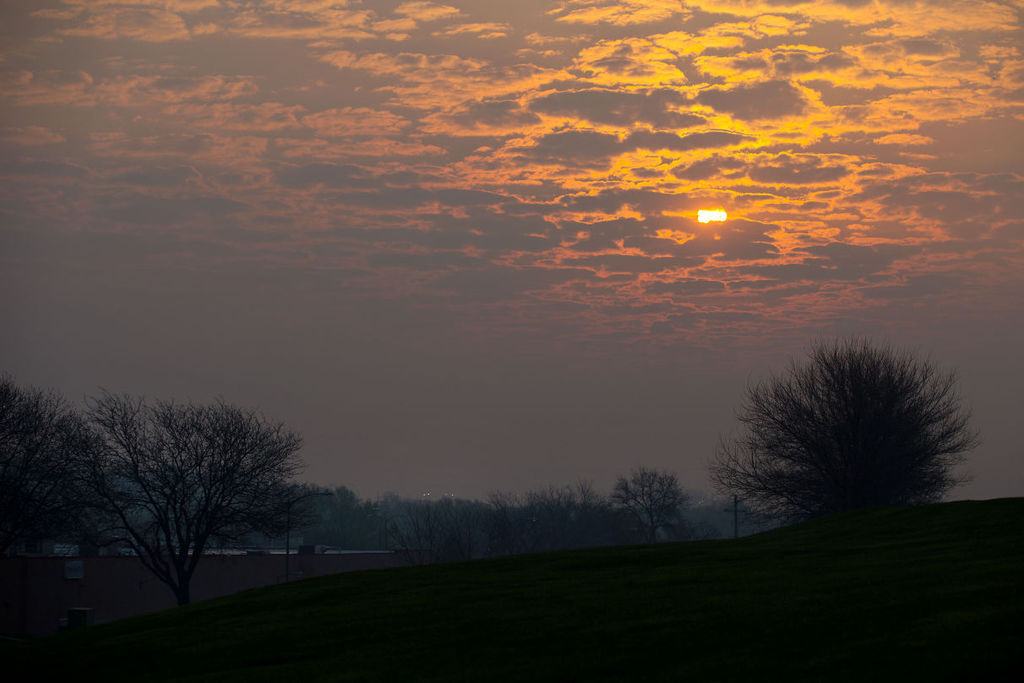 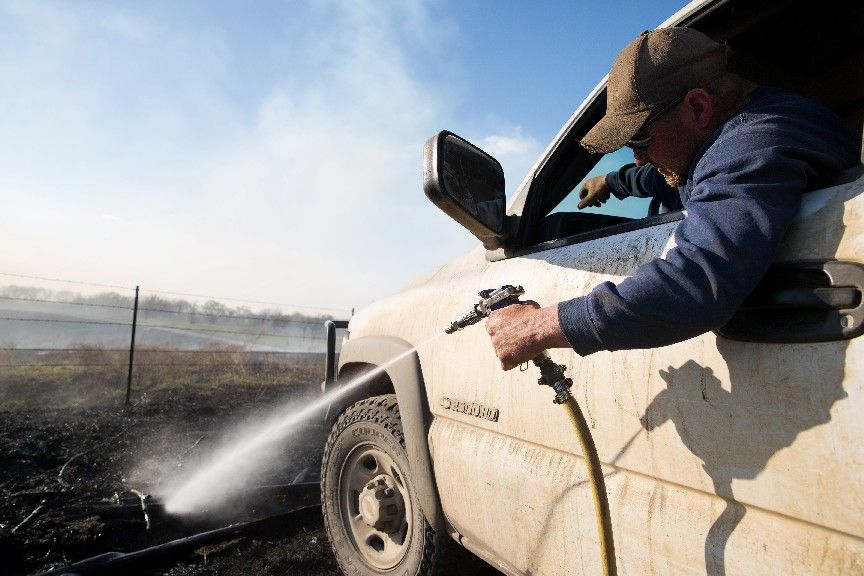 Mike Ehrlich of Council Grove, Kansas, sprays water on a hot spot while burning a pasture. Even though environmentalists want changes in the practice, ranchers are unlikely to support regulation of it.

* Early today, east-southeast winds around 10 mph may have re-routed smoke from controlled agricultural burn-offs across Kansas grasslands away from southeast Nebraska and southwest Iowa.

* The Omaha area was hampered by a smoky haze most of Thursday morning before the air improved by late morning.

* Also early today, the EPA's Air Quality Index indicated that local air-quality conditions were good in the Omaha area and moderate in the Lincoln area.

* The National Weather Service office in Valley had forecast widespread smoke and haze today for the Omaha area through 7 a.m.

Eastern Nebraskans have gotten a strong whiff this week of a long-running controversy in Kansas over the seasonal burning of rangeland.

Smoke from the controlled burns caused air quality in eastern Nebraska to deteriorate the point that schoolchildren were kept indoors during recess, and outdoor athletic events were canceled. School officials say this was the first time in memory that something like that has happened.

“Just when you thought you’ve seen it all,” said Jon Mauro, director of the Metro Conference baseball tournament. The event was one of dozens delayed or canceled this week. “It’s unbelievable. I’ve been doing this a long time, and I don’t ever remember smoke postponing anything.”

Given the drop in air quality and the concerns it raised, Nebraska’s top environmental regulator, Jim Macy, was in contact with federal officials and those in Kansas, said Brian McManus, a spokesman for the Nebraska Department of Environmental Quality.

“This really does become a regional issue,” McManus said.

Between 1 million and 2 million acres of grassland is set on fire each spring in Kansas to kill off invasive weeds and make the land more profitable for grazing cattle. Conservationists and others oppose the practice because of the air pollution it generates and the widespread death of wildlife.

It’s not clear how much control anyone has over the fires, though.

Regulation of controlled burns is done at the local level and is based on the risk of uncontrolled wildfires, officials said. The EPA and the State of Kansas are both limited in their ability to regulate controlled burning, spokesmen said. However, because of ongoing complaints in Kansas, the state has undertaken a voluntary program to reduce smoke from controlled burns.

“It is obvious those plans didn’t work out too well this year,” said McManus of Nebraska. “Our director has indicated there’s going to be some ongoing discussion and analysis ... to see what can be done to prevent this in the future.”

At its worst Thursday morning, Omaha’s air-quality score reached 191 and Lincoln’s reached into the 170s. The Air Quality Index defines unhealthy air as having a score of 151 to 200.

Lincoln and Omaha are the only two metro areas in the immediate vicinity to have real-time air monitors, so those are the only areas with numbers readily available. Public health officials said air quality was similarly compromised throughout the region. Other communities may have air monitors, but those monitors deliver data as a 24-hour average.

Air quality improved significantly during the day as winds picked up. By midafternoon Thursday, even asthmatics could be outdoors.

Additional episodes of poor air quality are possible given the forecast. Southerly winds are likely for the next few days, which could pull in smoke from Kansas, said Van DeWald, a meteorologist with the National Weather Service.

The air-quality problem, even if it pops back up a couple of times, doesn’t pose a long-term threat to health, medical experts said.

“It’s not going to be dangerous to your health in the long term,” said Dr. Linda Ford of the Asthma and Allergy Center. Instead, the risk is of an immediate nature, such as an asthma attack.

Local doctors said they didn’t expect to see a surge in complaints because a good amount of public education was taking place and because most people already know how to manage their health problems.

A seasonal practice in Kansas, the controlled burns had a noticeable effect on air quality in Nebraska this week for a couple of reasons.

Jody Holthaus, a livestock and natural resource extension agent for Kansas State University, said ranchers set more fires than usual this week because dry, windy conditions this spring have kept them from a staggered schedule of controlled burns. With winds dying down, ranchers pushed to get more of their fields burned.

Additionally, a weather phenomenon known as an inversion occurred Thursday morning in eastern Nebraska, trapping the pollutants at ground level, said DeWald of the weather service. After the sun came up and the winds picked up, the smoke dissipated.

Kansas, like Nebraska, is a major cattle-producing state, but its ranchers use controlled burns on a scale not practiced in Nebraska because of differences in climate and land cover.

“Our climate is a wet climate; just one year’s (weedy) growth can take over pastures fairly quickly,” he said.

“That would be a personal property rights issue,” he said. “We’d be inclined to argue that regulation preventing burning of pastures would be crossing the line of private property and inhibiting people’s ability to manage their pasture land.”

The goal of the burning is to clear invasive shrubs and red cedar while encouraging more nutritious pastures, Holthaus said. The fresh green shoots that thrive in the wake of fires help cattle grow, she said.

Holthaus said ranchers don’t have the option of using herbicides to control weeds because it would be too costly and difficult. The Flint Hills are a rough terrain, she said, and don’t lend themselves to spraying pesticides.

The rangeland being burned, the Kansas Flint Hills, is renowned for its tall prairie grasses, and ranchers also say the fires replicate the natural cycle of prairie fires, something conservationists dispute.

Studies have shown that ranchers have other options, said Craig Voland, chairman of the agriculture committee of the Kansas chapter of the Sierra Club.

“Our contention, and this is supported by research, is that you can burn at other times of the year and still get the benefit,” he said. “That would spread out the period of burning, and you could reduce the amount of smoke. It’s that simple.”

Voland said smoke from the fires should be tackled more aggressively since it is polluting the air of major metropolitan areas, including Kansas City, Lincoln and Omaha. Instead, he said, the EPA is considering a proposal that would allow cities to exclude smoke-related air pollution from being considered as part of their overall air quality.

“The Sierra Club is not against proper burning on a modest and stretched-out scale, so that it doesn’t hurt public health and wipe out wildlife,” he said. “What we’re against is the way they’re going about it.”

Nearly all schools in the Omaha area took precautions Thursday because of the poor air quality caused by smoke from controlled burns in Kansas.

Air quality was in the “unhealthy” range early Thursday before improving later in the day.

Schools have plans in place for dealing with heavy rains and severe weather, so the changes shouldn’t have been too disruptive, Westside spokeswoman Peggy Rupprecht said.

“It is a beautiful day outside,” Rupprecht said Thursday afternoon. “Everyone might want to go outside, but to play it safe we decided to keep everyone inside.”

Most schools either held after-school sports practices indoors or canceled them.

Westside held outdoor after-school activities as planned when the air quality improved to the “moderate” range about 3 p.m.

Many games and competitions were canceled or postponed, including the Bellevue West Invitational at Willow Lakes Golf Course in Bellevue and the 16-team Metro Conference baseball tournament, which was pushed back one day. The baseball tournament will start Friday with semifinal games and the championship game set for Saturday.

Bellevue West Athletic Director Jon Mauro, the tournament director, said the reason for the postponement — the poor air quality — was something he never had experienced.

“It’s unbelievable,” he said. “I’ve been doing this a long time, and I don’t ever remember smoke postponing anything.”

Mauro added that if air quality conditions force the postponement of school-related outdoor activities again Friday the tournament probably will be canceled.

“Nobody wants that,” he said. “Right now, we’ve got our fingers crossed.”

0 to 50-Good: Air quality is considered satisfactory, poses little or no risk

51 to 100-Moderate: Air quality is acceptable but poses slight risks for sensitive groups

101 to 150-Unhealthy for some: Members of sensitive groups may experience health effects

151 to 200-Unhealthy: Everyone may begin to experience health effects

201 to 300-Very unhealthy: Everyone may experience more serious health effects

An air quality advisory has been issued for parts of Nebraska east of Grand Island due to the potential for smoke from Kansas and Oklahoma grass fires, according to the Nebraska Department of Health and Human Services.

Smoke fills the air as a pasture is burned in eastern Kansas in 2016. Ranchers do controlled burns to kill off weeds, and southerly winds carry the smoke to Nebraska. More photos.

Grass burns on Thursday north of Manhattan, Kansas. Strong winds have been pushing the smoke from prairie-grass burn-offs in Kansas into eastern Nebraska and western Iowa for the past few days. More photos.

Mike Ehrlich of Council Grove, Kansas, sprays water on a hot spot while burning a pasture. Even though environmentalists want changes in the practice, ranchers are unlikely to support regulation of it.