Nebraska medicinal cannabis bill stalls in Legislature; backers look to 2020 ballot
5 comments
Share this
Only $5 for 5 months
1 of 2 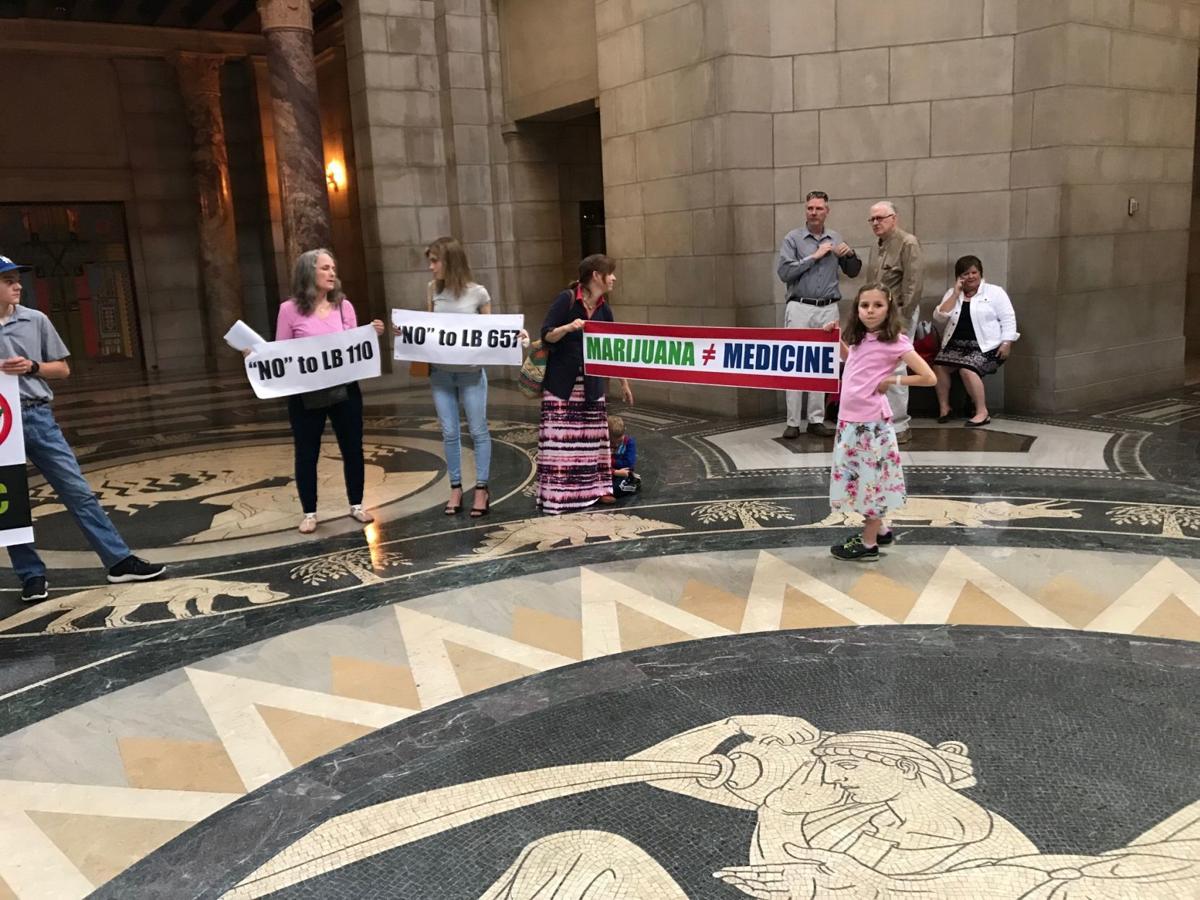 A handful of marijuana opponents bearing banners gathered Wednesday in the Capitol Rotunda as Nebraska lawmakers prepared to debate whether to legalize medicinal cannabis. 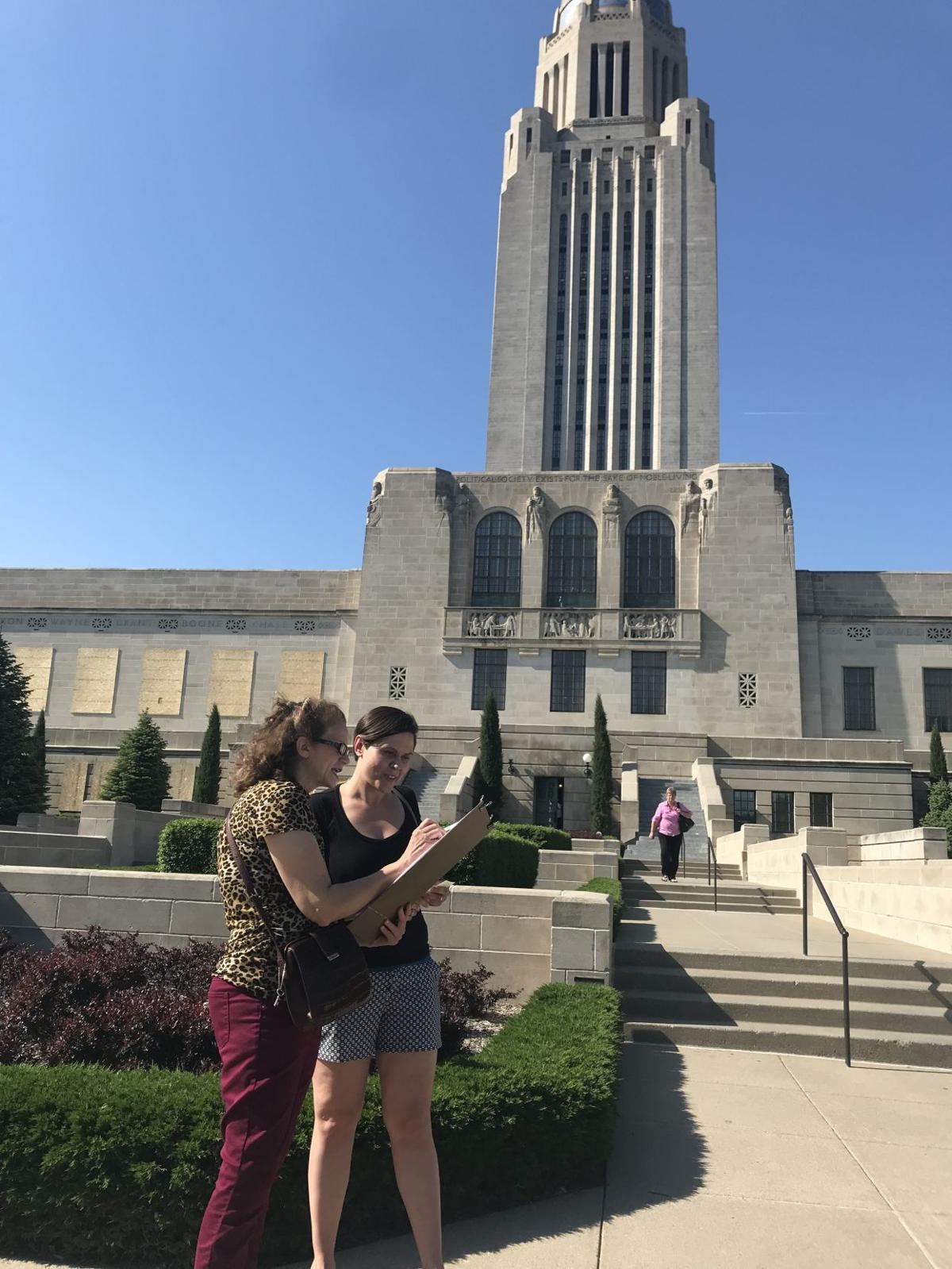 While state lawmakers prepared to debate legalization of medicinal cannabis on Wednesday evening, a supporter of legalization, Shari Lawlor of Valley, left, sought signatures to put the issue before voters in 2020. Lawlor said her grown daughter has struggled with epilepsy since she was 15 months old.

LINCOLN — The 2020 ballot looks to be the next stop for proponents of medicinal cannabis after a legalization proposal stalled in the Nebraska Legislature on Wednesday.

State Sen. Anna Wishart of Lincoln, who introduced Legislative Bill 110, said she doesn’t think she can find enough votes to end a filibuster against her bill. Speaker Jim Scheer of Norfolk halted debate on the measure after three hours, based on his policy for handling filibusters.

Just outside the legislative chamber, Dominic Gillen of Bellevue reached the same conclusion.

He watched the debate while clutching the hand of his teenage son, Will, who has suffered multiple daily seizures since he was 4 months old. Gillen said the debate was difficult to stomach, as opponents quickly switched from talking about medicinal cannabis to raising concerns about recreational marijuana.

“What this body is doing is daring the people to put it on the ballot,” Gillen said. “It’s going to be up to the people to do it.”

Gillen and other members of Nebraska Families 4 Medical Cannabis back the initiative petition drive that Wishart launched last year along with Sen. Adam Morfeld of Lincoln. The petition effort aims to put a constitutional amendment legalizing medical cannabis before voters next year.

Earlier Wednesday, a handful of marijuana opponents held banners in the Capitol Rotunda to protest any legalization of cannabis in the state.

Margaret Wall of Lincoln said she and the other protesters were not part of any formal group. Rather, they are concerned about Nebraska following the path of other states in legalizing hemp, then medical marijuana and ultimately recreational marijuana.

Wall called herself a “pot refugee,” who moved to Nebraska because it is one of three states that do not allow any use of cannabis, the type of plant that includes both hemp and its intoxicating cousin, marijuana.

Opinions varied just as broadly inside the legislative chamber as senators took up a long-awaited debate on LB 110 Wednesday evening. The bill would allow Nebraskans with certain medical conditions to use cannabis for treatment.

The conditions would have to be among those listed in the bill and be certified every 90 days by medical professionals. Among those conditions is severe or chronic pain lasting longer than three months that is not adequately managed by non-opioid medications; post-traumatic stress disorder, where at least one other treatment failed; and terminal illnesses in which a patient had less than a year to live.

The bill also would create a system to regulate the production and distribution of cannabis to those patients.

An amendment adopted by the Judiciary Committee proposes tighter regulations than the original bill. It would not allow people to grow their own plants or smoke cannabis and would limit the amount of cannabis allowed to patients.

Morfeld said LB 110 represented the last opportunity for lawmakers to pass a “measured and reasonable” medical marijuana bill, while Sen. Wendy DeBoer of Bennington compared medicinal cannabis to natural remedies like ginger root for stomach upset or turmeric for inflammation.

On the other side, Sen. Mike Hilgers of Lincoln argued that Nebraska should not pass a law conflicting with federal marijuana laws. Sen. Suzanne Geist of Lincoln said scientists, not legislators, should be the ones approving medicines. Several opponents raised concerns about the effects of marijuana on individuals and society.

Medical marijuana in Nebraska? Bill reaches full Legislature, but sponsor not confident it will pass

State Sen. Anna Wishart, who introduced the bill, said, "It is one of the best public health models in the country," but gave it less than a 30% chance of passing.

Spending, taxes and medical cannabis yet to be debated in Nebraska legislative session

With less than a third of the session to go, lawmakers still have plenty of heavy lifting to do.

8 key questions about the issue of medical marijuana answered

Legislative hearing on medical marijuana brings out pleas and warnings

Under LB 110, Nebraskans with certain medical conditions certified by a health care provider would be allowed to use cannabis. The bill would set up a registry for patients.

Injured vet, who would rather return to war than narcotics, among those pushing for medical marijuana

Nebraska remains one of three states that prohibit medical cannabis in all forms. State lawmakers and cannabis advocates expect renewed efforts to change Nebraska law during the legislative session that starts Jan. 9.

The proposal, chiefly crafted by State Sen. Tom Briese of Albion, would raise about $100 million in new tax revenue by taking away sales tax exemptions on such items as pop, candy and home repairs done by contractors.

The trial involved more than 48,000 women who did not have breast cancer when they enrolled in the study conducted at 40 centers across the United States.

Nebraska lawmakers are headed for a donnybrook over state tax policy and a likely showdown with Gov. Pete Ricketts over state spending as the 2019 session enters its last two weeks.

Opponents voiced concerns over his lack of labor experience and the fact that, as a legislative candidate in 2016, he argued against a government-imposed minimum wage. Supporters said there have been others appointed to the Commission of Industrial Relations without labor law experience.

The petition drive aims to put a proposed constitutional amendment on the 2020 general election ballot that would give Nebraskans the right to use medical cannabis for serious medical conditions, subject to “reasonable laws, rules and regulations.”

States that allowed marijuana use for medical purposes actually had 23 percent more deaths from opioid overdoses, when they looked over a longer period of time.

Proving that a plant is marijuana requires testing not available currently in Nebraska, and some prosecutors say it would be cost prohibitive to bring out-of-state lab technicians in to testify.

The Doane program will cover the science of cannabis, health and wellness aspects of it, cultivation and processing, regulations, and professions in the industry.

On Monday, Gov. Pete Ricketts announced a collaborative initiative aimed at combating addiction by providing specialized training to prepare more of the state’s health care providers in the prevention, diagnosis and treatment of addiction.

Matthew Schweich, deputy director of the Marijuana Policy Project, and Luke Niforatos, chief of staff for Smart Approaches to Marijuana, will be featured at the Oct. 17 launch of Good Talks for the Good Life, a Nebraska effort to promote thoughtful, reasoned dialogue on divisive issues.

A handful of marijuana opponents bearing banners gathered Wednesday in the Capitol Rotunda as Nebraska lawmakers prepared to debate whether to legalize medicinal cannabis.

While state lawmakers prepared to debate legalization of medicinal cannabis on Wednesday evening, a supporter of legalization, Shari Lawlor of Valley, left, sought signatures to put the issue before voters in 2020. Lawlor said her grown daughter has struggled with epilepsy since she was 15 months old.