Would lead pose a health risk in Omaha's renovated riverfront parks?
0 comments
Share this
{{featured_button_text}}
1 of 2 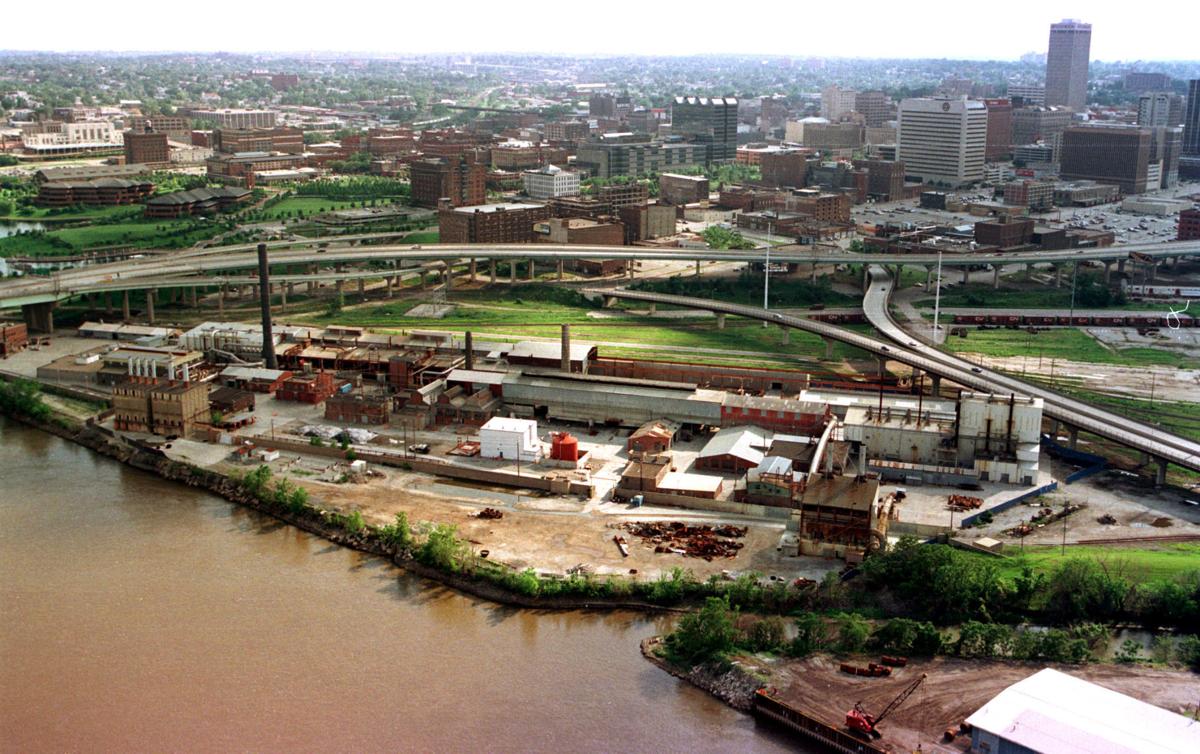 The Asarco lead refinery on the riverfront in 1998, a year after it closed. Contaminated soil was wrapped in a liner and covered in clean dirt at the site, now Lewis & Clark Landing. 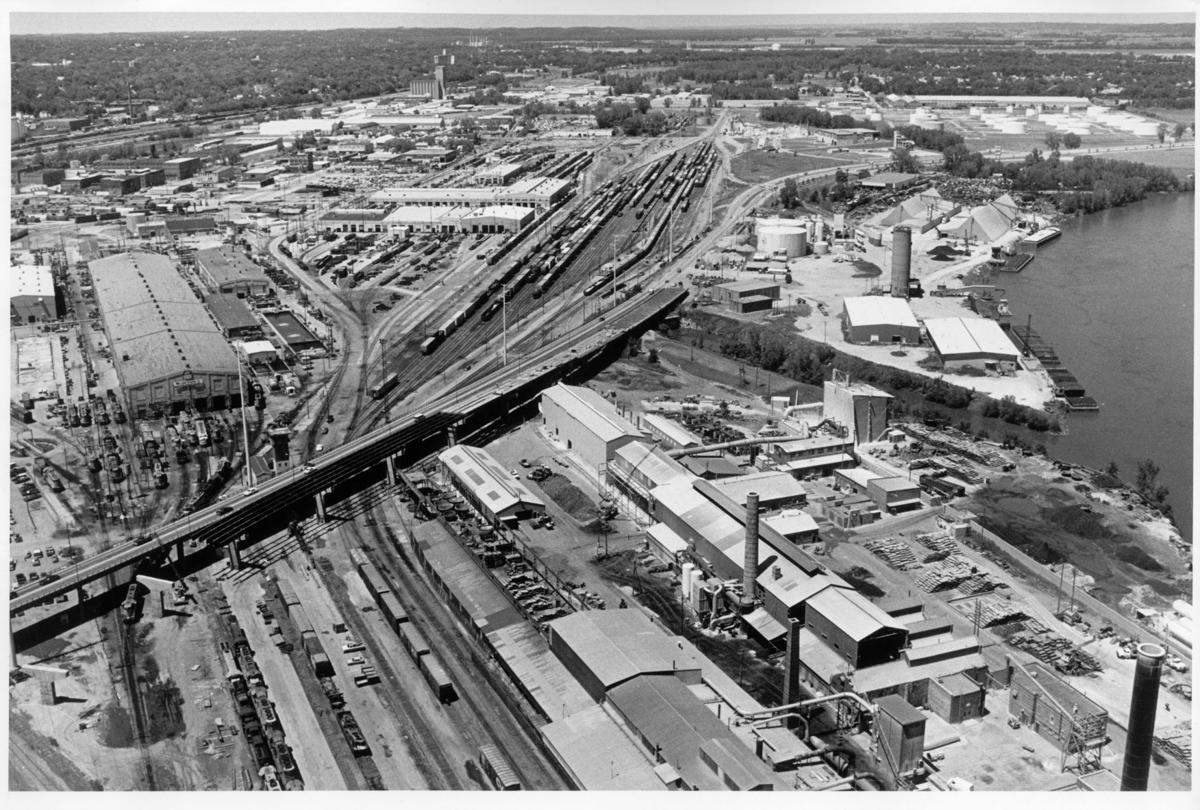 The Asarco plant, southeast of Abbott Drive, in 1984. The area has been transformed by Lewis & Clark Landing and other development. As the riverfront undergoes more change, industrial contaminants must be taken into account.

But reshaping two of the parks, Lewis & Clark Landing and Heartland of America Park, requires extra care because of the riverfront’s industrial past and related environmental problems.

Lewis & Clark Landing once held the nation’s largest lead smelter and refinery, a plant that was operated by Asarco until 1997. Part of Heartland of America Park was home to a Gould lead battery disposal facility until 1982.

People like their parks the way they like their gasoline — unleaded. Lead carries serious health risks, experts say. Exposure can cause irritability, memory loss, anemia and even brain damage. The sites also faced other contaminants, including arsenic and cadmium.

That’s why the managers and engineers steering nearly $300 million in renovations say they are designing their work at Lewis & Clark and Heartland of America to keep the contaminants buried. There are not similar concerns at the Gene Leahy Mall, which is also part of the project.

Much of the most contaminated soil at the site that became Lewis & Clark Landing was wrapped in a liner, a burrito of sorts that shouldn’t let it surface. The lead burrito was covered in 3 to 6 feet of clean dirt, and the park was surfaced with concrete.

Less-contaminated pockets of tainted soil at the Heartland of America Park site were covered in concrete and buried, according to officials and documents.

“We know where the material is,” said Chris Koenig, senior project manager for HDR Inc. “We have done additional investigation to verify where it’s at. We are completing our design to avoid it entirely.”

The parks are safe in their current form and will remain so for people and pets, say officials with the city, the Metropolitan Entertainment and Convention Authority and the Nebraska Department of Environment and Energy.

Among the steps being taken:

“It all comes down to good engineering,” Koenig said.

The goal is to make sure the integrity of previous lead mitigation efforts is maintained, said Mike Felix, the state’s supervisor of waste remediation for the environmental department.

And if those steps are followed, people should feel confident that they can enjoy the parks without fear, said Shannon Bartelt-Hunt, professor and chair of civil and environmental engineering at the University of Nebraska-Lincoln.

“I don’t have significant concerns,” she said.

One example of a change that was made to avoid disturbing contaminated soil involves the slope of Douglas Street. The city is extending the street east to connect with Lewis & Clark Landing.

The street will stay level longer than road designers ideally prefer and slope more steeply as it approaches the railroad tracks near the riverfront to avoid digging too close to the lead-contaminated soil, Koenig said.

At Lewis & Clark Landing, workers will plant trees with roots that go no deeper than 3 feet. The former agreement on what could be built or planted at the site prohibited trees to protect the lead cap.

Mark Welsch was a member of the executive committee of the regional Sierra Club when the Asarco plant negotiated its handover of the land to the city. He said it sounds like the city and state are taking the necessary steps.

People visiting the parks should be fine, he said, as long as they don’t take a dip in the Missouri River, which he said is probably still contaminated from the smelter and refinery, even all these years later.

But, he said, he’s wary of planting trees above the Asarco cap.

“I would not trust a tree or a bush because they cannot monitor it if it just decides to find a weak spot in the cap and go through it,” Welsch said, mentioning the potential risk to groundwater and soil.

City and project leaders said they would only use trees that their analysis shows can be planted safely. Lewis & Clark Landing has 5 to 6 feet of fill dirt above the contaminated soil, they say, providing a cushion for the roots.

Construction work at Heartland of America Park has begun and is expected to run through early 2023. Work on Lewis & Clark Landing is set to start in early 2021 and run through mid-2023.

Final amenities will be installed in both parks through 2024.

The EPA's National Priorities List includes sites that appear to present a significant risk to public health, welfare or the environment.

Extension master gardeners have rescued many of the more interesting plants in two beds at Heartland of America Park before the wrecking ball arrives.

The $290 million project is showing quick progress on its way to transforming Leahy Mall, Heartland of America Park and the Missouri Riverfront.

Eighth Street between Douglas and Farnam to close until 2021

Douglas Street between 10th and 8th Streets also will be closed next month.

But there will be lights in the Old Market, starting Nov. 25.

Engineers are taking a range of steps to ensure against lead contamination.

A clear City Council majority backs paying the mayor more in the next term than the city does today. But at issue now is a draft amendment from two council members that would boost the next mayor’s pay sooner than the 3%-a-year proposed by Council President Chris Jerram for 2023-2026.

Releases from Missouri River dams to be lowered starting Saturday

The reduction in releases is necessary for the Missouri River to drop enough for water to drain from flooded fields.

Omaha's Heartland of America Park to close for construction Dec. 2, will reopen in 2023

Omaha's nearly $300 million transformation of three downtown parks into "The RiverFront" is moving east from Gene Leahy Mall. The work will close the city's part of Heartland's lake, its views and its trails for three years.

Some people who for months paid a quarter an hour at 10-hour parking meters around downtown Omaha might notice they’re paying double, 50 cents.

Demolition and grading work remain on pace, members of the MECA board heard Tuesday.

Gene Leahy Mall work will reduce lanes on Douglas, Farnam for about a month

Starting Tuesday, one lane of Douglas Street and one lane of Farnam Street east of 14th Street will close for about a month.

The Asarco lead refinery on the riverfront in 1998, a year after it closed. Contaminated soil was wrapped in a liner and covered in clean dirt at the site, now Lewis & Clark Landing.

Heartland of America Park, where a lead battery disposal facility operated until 1982. Through early 2023, construction work will shrink the park’s lake and create a promenade, among other features.

The Asarco plant, southeast of Abbott Drive, in 1984. The area has been transformed by Lewis & Clark Landing and other development. As the riverfront undergoes more change, industrial contaminants must be taken into account. 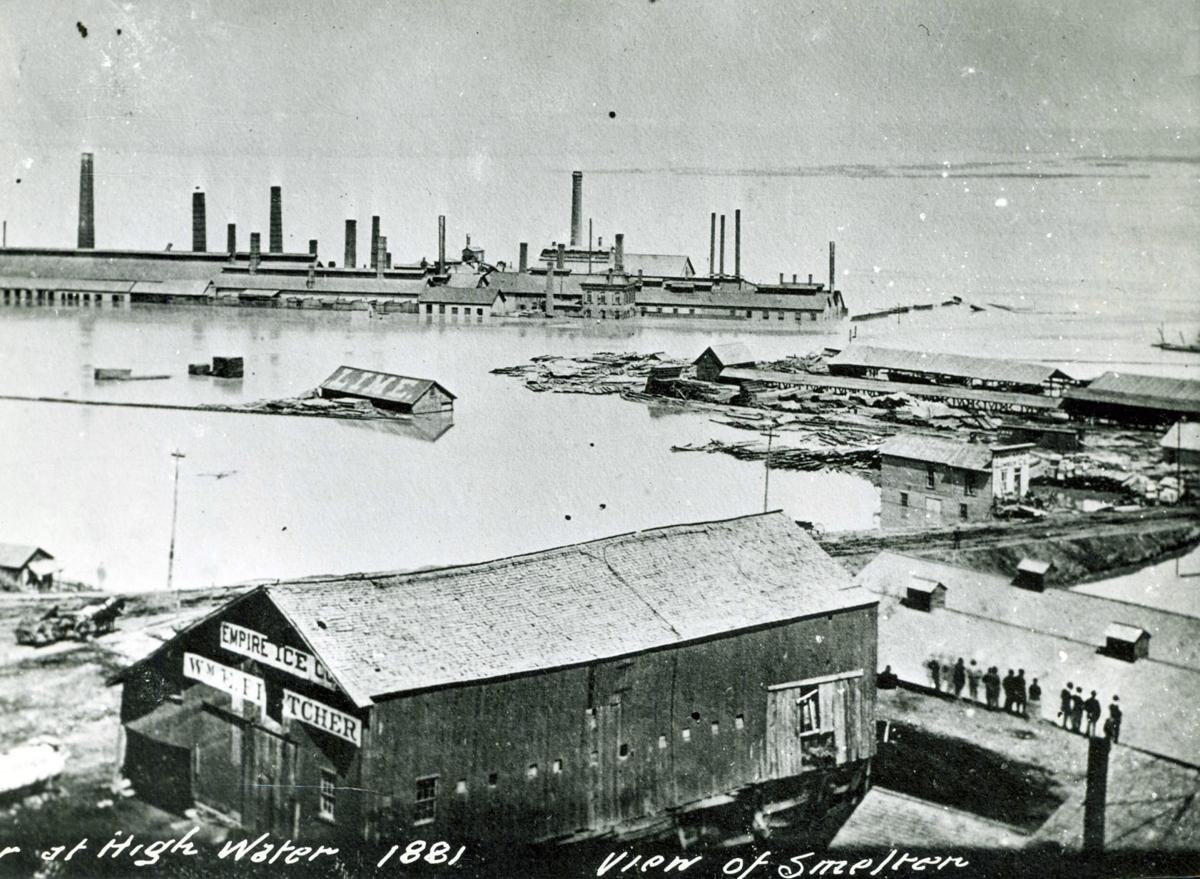 The flood of 1881 submerges the American Smelting and Refining Co. plant on the Omaha riverfront.