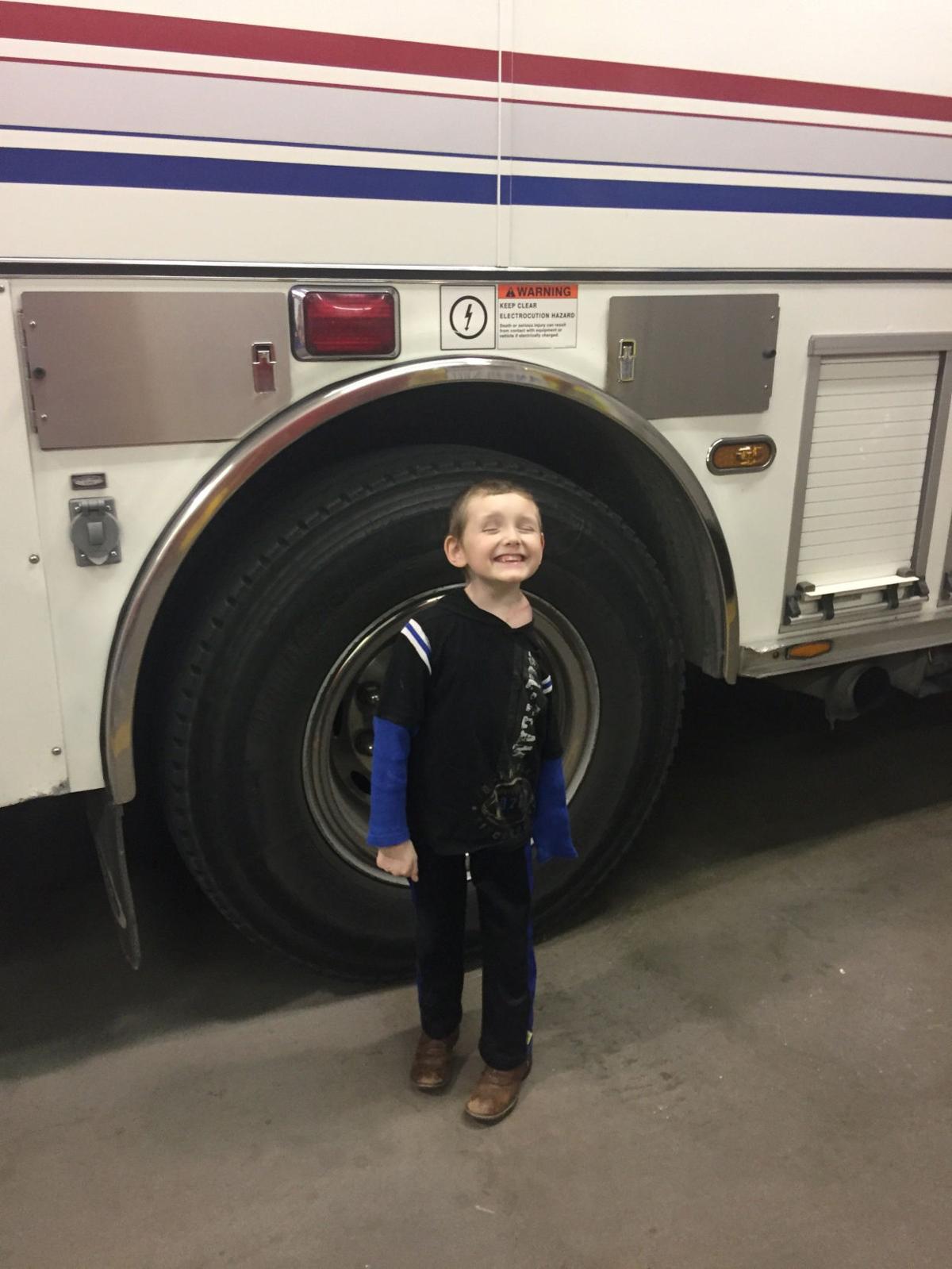 Chase Tiemann paid a visit to the Papillion Fire Department on Dec. 12 to become an honorary firefighter. His mom reached out to the department when she found out Chase would need his left arm amputated. 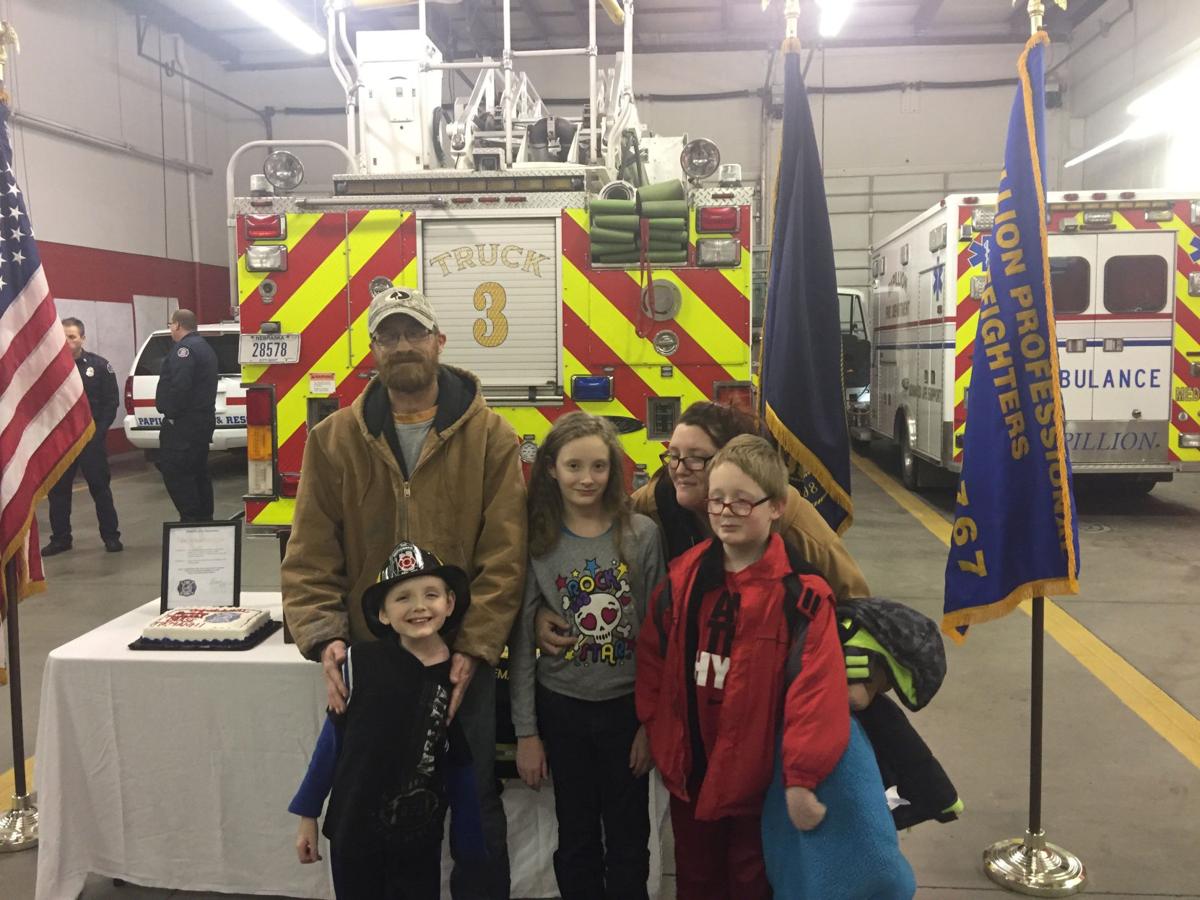 Chase Tiemann, front left, became an honorary member of the Papillion Fire Department this week. With him at the Papillion fire station are his parents, Kenneth Hulsebus and Jonell Tiemann, and siblings Alexia and Brandon Tiemann. 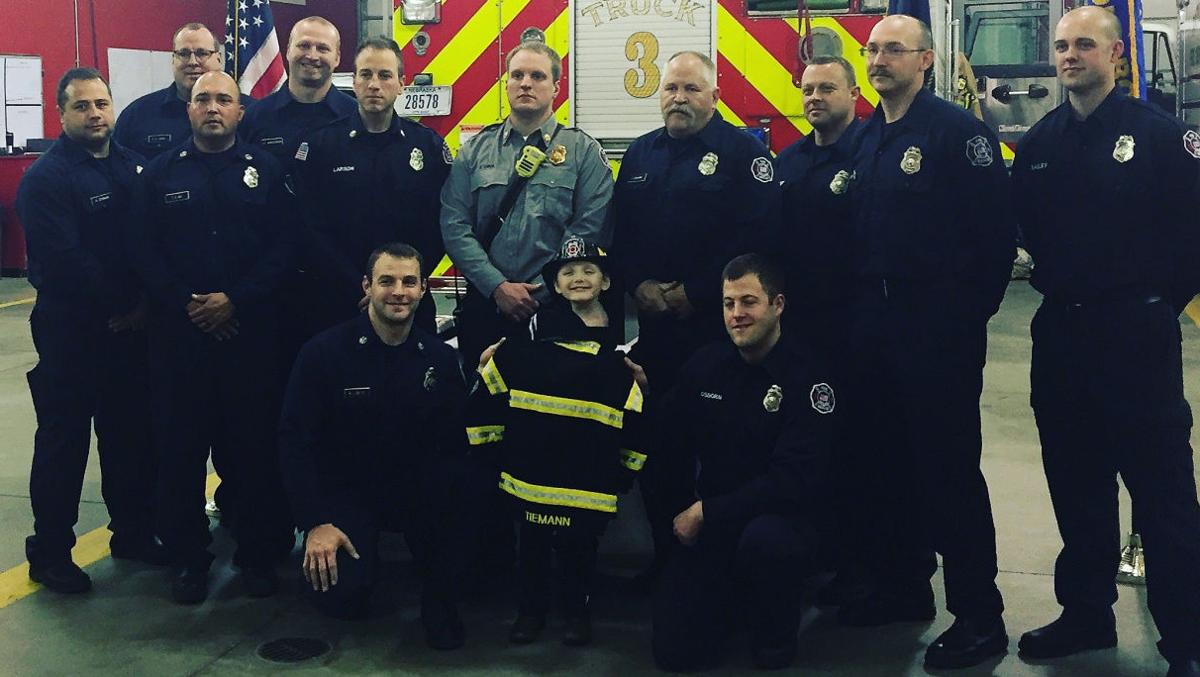 Chase Tiemann, center, poses with members of the Papillion Fire Department. The department named the 6-year-old an honorary firefighter.

Chase Tiemann has a new title to put on his résumé: firefighter.

But it’s going to be awhile before the 6-year-old can barrel into a burning building. For the time being, he’s an honorary member of the Papillion Fire Department.

He received his badge and a uniform Monday in a formal ceremony. After his left arm had to be amputated last month, the Omaha boy needed something to lift his spirits.

Chase has wanted to be a firefighter for half of his young life, but because of numerous surgeries and the amputation of his arm, his mother, Jonell Tiemann, wasn’t sure his dream would ever come true.

Chase has a condition that causes tumors — sometimes benign and sometimes cancerous — to form in his body.

Tiemann noticed something was wrong when he was 6 weeks old. The baby wouldn’t move his left arm and cried when his parents touched it. When he was 1 year old, doctors found a tumor wrapped around Chase’s spinal cord. They believe it affected mobility in his arm.

Through a series of surgeries, doctors removed the tumor on his spine. A cancerous tumor also extended from his shoulder to his heart. To get to the tumor, doctors needed to amputate Chase’s left arm, which he couldn’t move.

When Tiemann learned her son would have to have his left arm amputated, she wanted to do something special.

Through some searching on Facebook, Tiemann found out that the Papillion Fire Department employed an amputee.

Clayton Kulhanek lost his right leg below the knee after it was crushed between rungs of an aerial ladder on a firetruck.

Almost a year after the accident, Kulhanek returned to work at the department.

Serving as a role model to kids like Chase is important for Kulhanek. He remembers the struggles he encountered learning to live without a limb.

“Any time that I’m able to help out a fellow amputee to improve their circumstances, I’m obligated, because I know how tough it was for me,” said Kulhanek, who met with Chase at the fire station and at Children’s Hospital & Medical Center.

Meeting with Kulhanek helped Chase to cope with the change, said his mom.

“I think it helped him a lot to know that it doesn’t matter. As long as you can do the job, nothing’s going to stop you, whether you have both limbs or you’re missing something,” she said.

Papillion Capt. Ben Bolte helped to arrange the meeting between Kulhanek and Chase, as well as the fire station tour. Bolte took the lead in ordering the pint-size bunker gear for Chase and organizing Monday’s ceremony.

The ceremony, held at the downtown Papillion fire station, was the real deal.

Papillion Fire Chief Bill Bowes read a proclamation naming Chase an honorary firefighter. Then he and Bolte presented Chase with a badge, helmet and coat, complete with his name on the back.

Papillion firefighters welcomed Chase to the department with handshakes, a chorus of “congratulations” and cake.

Chase was in disbelief that he had become an honorary firefighter.

“He was pretty speechless the whole time,” Bowes said. “All he could do was smile. It was probably a little overwhelming, but you could tell he was loving it.”

The ceremony was also meaningful for department members.

“The ability for Chase to become an honorary firefighter was really very special for us,” Bowes said. “I could tell from looking around the room at the guys’ faces how much of an emotional impact it was having on them.”

Papillion firefighters use old house for training exercise, then burn it to the ground

About 20 members of the Papillion Fire Department participated in training exercises in different rooms of the house before burning the structure to the ground.

Chase Tiemann paid a visit to the Papillion Fire Department on Dec. 12 to become an honorary firefighter. His mom reached out to the department when she found out Chase would need his left arm amputated.

Chase Tiemann, front left, became an honorary member of the Papillion Fire Department this week. With him at the Papillion fire station are his parents, Kenneth Hulsebus and Jonell Tiemann, and siblings Alexia and Brandon Tiemann.

Chase Tiemann, center, poses with members of the Papillion Fire Department. The department named the 6-year-old an honorary firefighter.