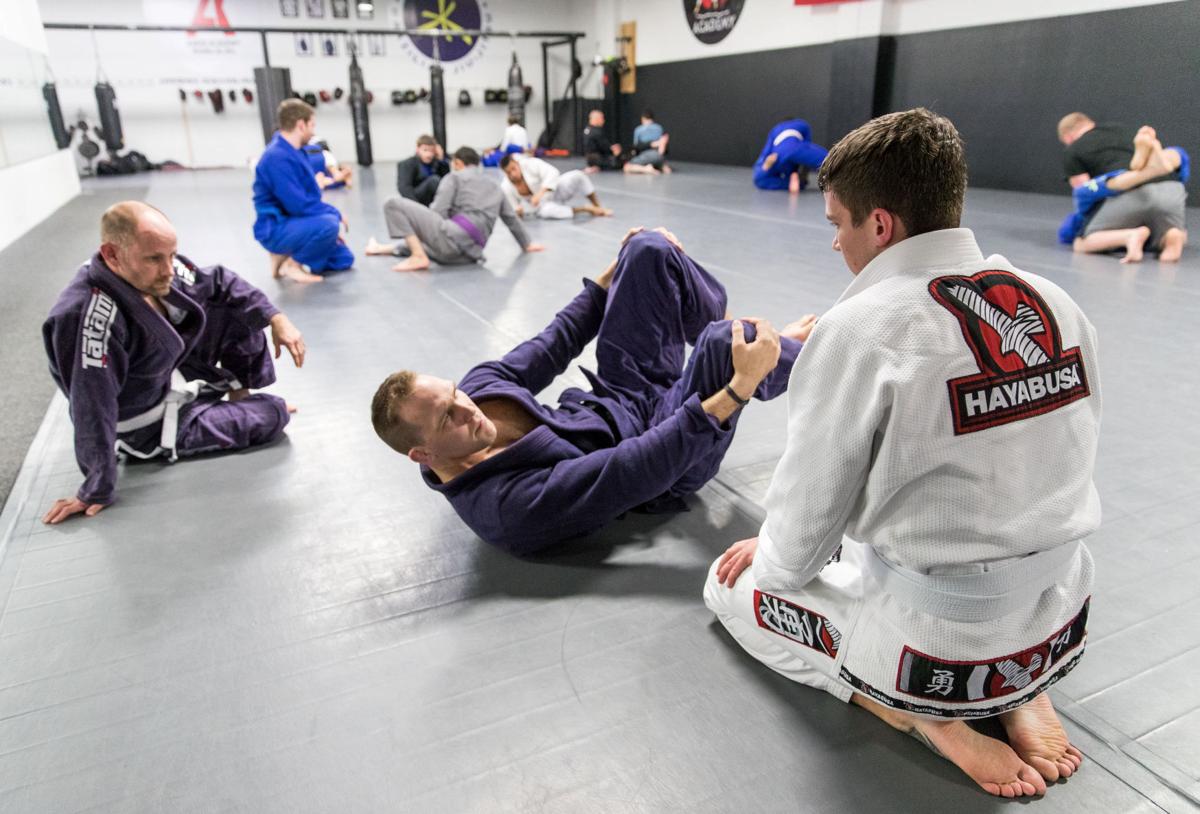 John Hansen instructs students at his jiujitsu academy. In 2014, Hansen received his black belt in Brazilian jiujitsu after years of training and competing. 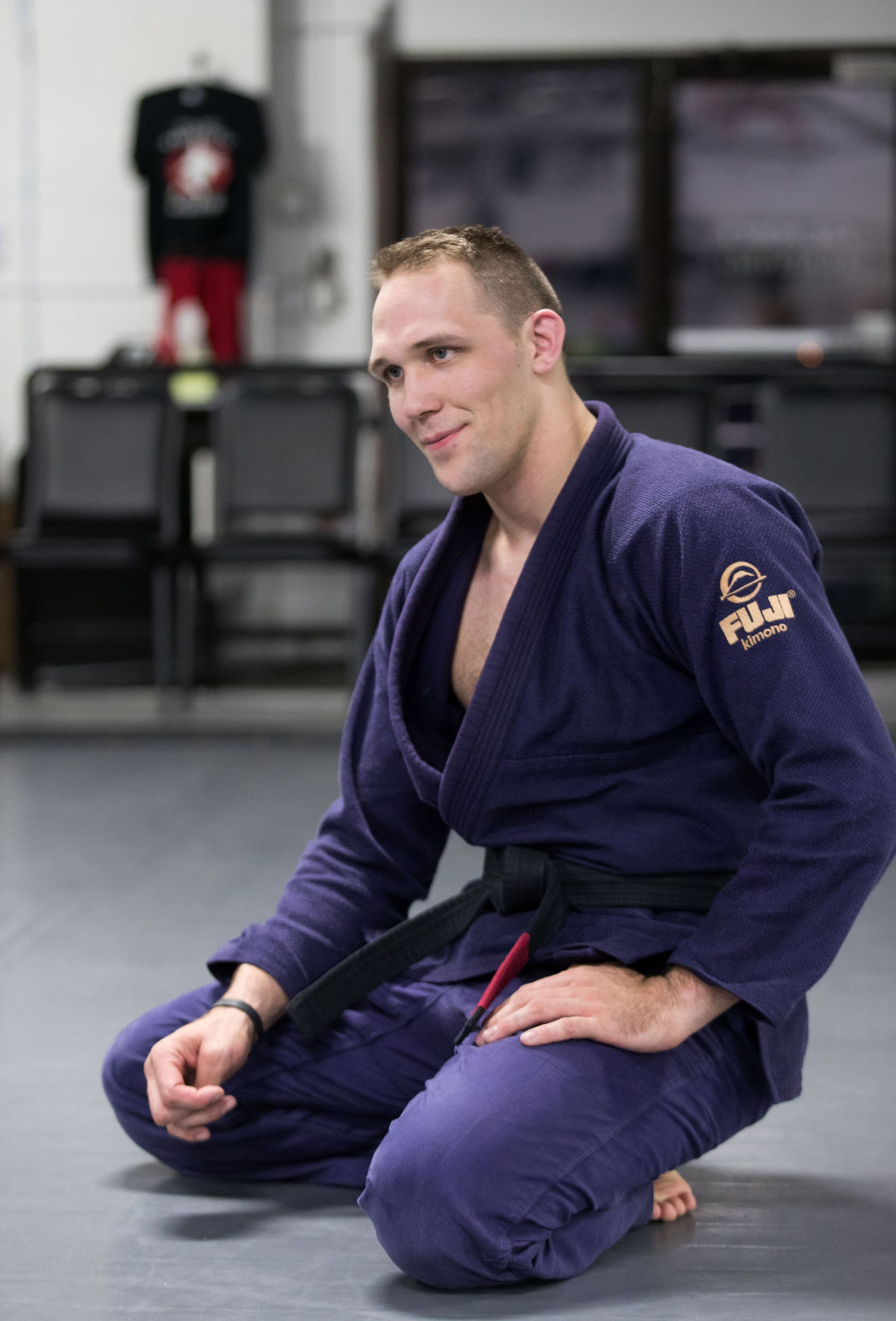 John Hansen became interested in jiujitsu in college in an effort to reinvent himself. 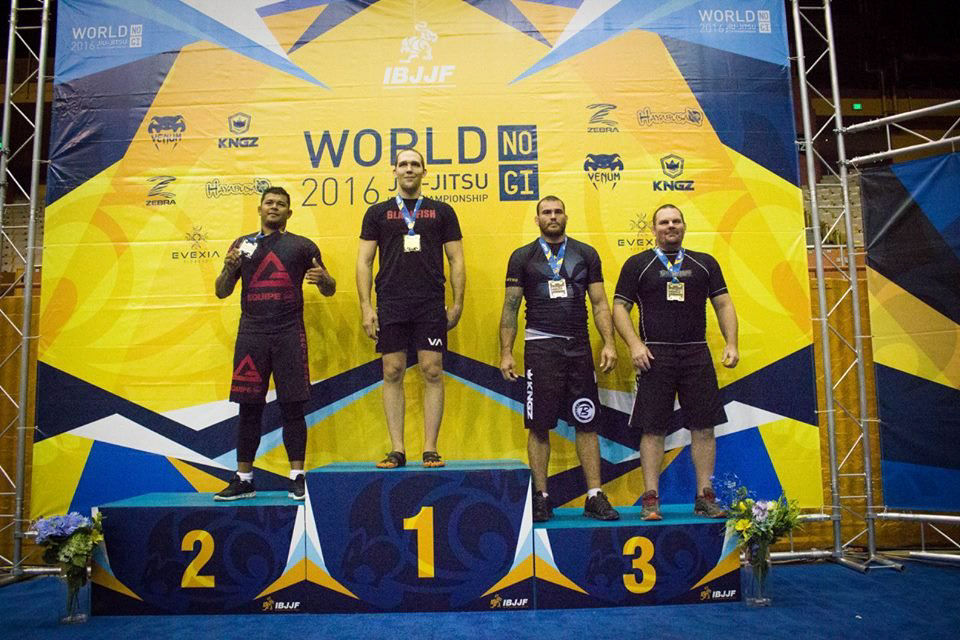 Hansen takes first place at the No-Gi World Championships in 2016.

When John Hansen left for college, he decided to reinvent himself.

He no longer wanted to be the bullied, lanky teen who lacked self-esteem.

Hansen started studying YouTube videos on the martial art of Brazilian jiujitsu, and it paid off. Now the 30-year-old Council Bluffs native is a world champion in the sport.

He’s seen physical improvements from practicing the martial art; he put on about 100 pounds in his training, and his imposing, muscular stature helps in his line of work as a security operations manager and a bouncer.

But Hansen also has benefited mentally.

“For the longest time, I found myself to be of little to no worth,” he said. “What I’ve found from it is that success can come to those who apply themselves.”

When Hansen started watching YouTube videos in college, it was to gain an understanding of how the sport worked.

Brazilian jiujitsu is a martial art in which competitors grapple, typically on the ground, until someone submits or time ends. Smaller athletes can defend themselves against a larger opponent by using leverage.

“It just seemed to make sense,” Hansen said. “It was physics and math and a lot of angles. It didn’t seem to require much physical exertion.”

Hansen started practicing the moves he saw in videos with a body pillow in his dorm room at the University of Iowa. Still shy in 2007, he didn’t train at a local jiujitsu gym, but he opted to compete in a tournament in Omaha, anyway.

He took first in that tournament and signed up for a second competition later that year.

The following year, Hansen joined Mick Doyle’s Kickboxing and Fitness Center, near 108th and Blondo Streets. He started training for a mixed martial arts national championship. But after two years and numerous injuries, Hansen shifted his focus back to Brazilian jiujitsu.

Hansen bounced from gym to gym until he and a friend eventually opened their own, called Axios Academy, in 2012. Two years later, the gym moved to security firm Clark International, 1213 S. 75th St., in Omaha. They offer 10 adult classes each week that are open to the public.

Dan Clark, CEO of Clark International and Hansen’s employer, said he has seen many people change their lives through martial arts by gaining self-confidence or being more disciplined, including Hansen.

“John wasn’t necessarily a natural athlete,” Clark said. “It’s something that he has worked so hard to achieve. Through years of martial arts training, he’s reached a level of competition that few have.”

Hansen avoided sports altogether in high school. He tried wrestling when he was young, but felt he lacked talent. He opted for solo endeavors through drama and speech.

Josh Nelson, a jiujitsu student, has been training with Hansen for about nine years. Hansen’s humble beginnings in the sport made him relatable to Nelson and other students.

“It just started clicking. He got better and better. As he learned, he taught me, and he progressed beyond belief,” said Nelson, who called Hansen one of his mentors.

One of the biggest life lessons Hansen has taken from the sport is to keep a positive attitude.

“In jiujitsu, everybody has it tough. Everybody’s had someone trying to choke the life out of them. You can’t have a negative attitude,” Hansen said.

Hansen has taken home 10 medals from six past world championships. At a competition in November, he entered the finals without a point scored against him for the first time.

“That was a drastically different experience than I had before. That felt good,” Hansen said.

In the minutes after being declared the No-Gi World Champion that day, Hansen felt a rush of emotions. He shouted and cried when he won, but it didn’t take him long to set his sights on the next goal: qualifying for the Abu Dhabi Combat Club.

The world championships are like the Olympics, the top tournament in the world for the sport. The Abu Dhabi Combat Club is more like the NFL. It offers large cash prizes and features elite athletes.

“When there’s something that I find that I want, I just pursue every avenue possible until I get it,” Hansen said. “When I started out training, I didn’t have any desire other than to be a world champion. They usually tell you to set small goals because otherwise you’ll have a major disappointment. That didn’t really work for me, so when I started, I said, ‘Man, I just want to be the best in the world someday.’”

If Hansen could revisit his younger self, he would dole out some advice: have confidence, be outgoing and develop a thick skin. But he wouldn’t want to change any of his experiences, crediting them for where he is today.

“It would be nice to know that all that hell was going to pay off some day,” Hansen said.

“I’ve never stuck with something for so long,” Mindy Wiese said. “Every pound was a lot for me.”

'I want to take care of myself': Diabetes diagnosis inspires Omaha woman to reinvent lifestyle

Six months after Lisa Wright changed her diet and started exercising regularly, she lost 15 pounds and was taken off all of her medications.

'It's never too late to get started': Omaha woman becomes professional bodybuilder at 46

“I wouldn’t say I’m obsessive about anything. I’m just determined about things,” Margie Irfan said. “I like playing by the rules, and I’m highly compliant. I was determined to see a change.”

John Hansen instructs students at his jiujitsu academy. In 2014, Hansen received his black belt in Brazilian jiujitsu after years of training and competing.

John Hansen became interested in jiujitsu in college in an effort to reinvent himself.

Hansen takes first place at the No-Gi World Championships in 2016.