'It's never too late to get started': Omaha woman becomes professional bodybuilder at 46
0 comments
Share this
1 of 6 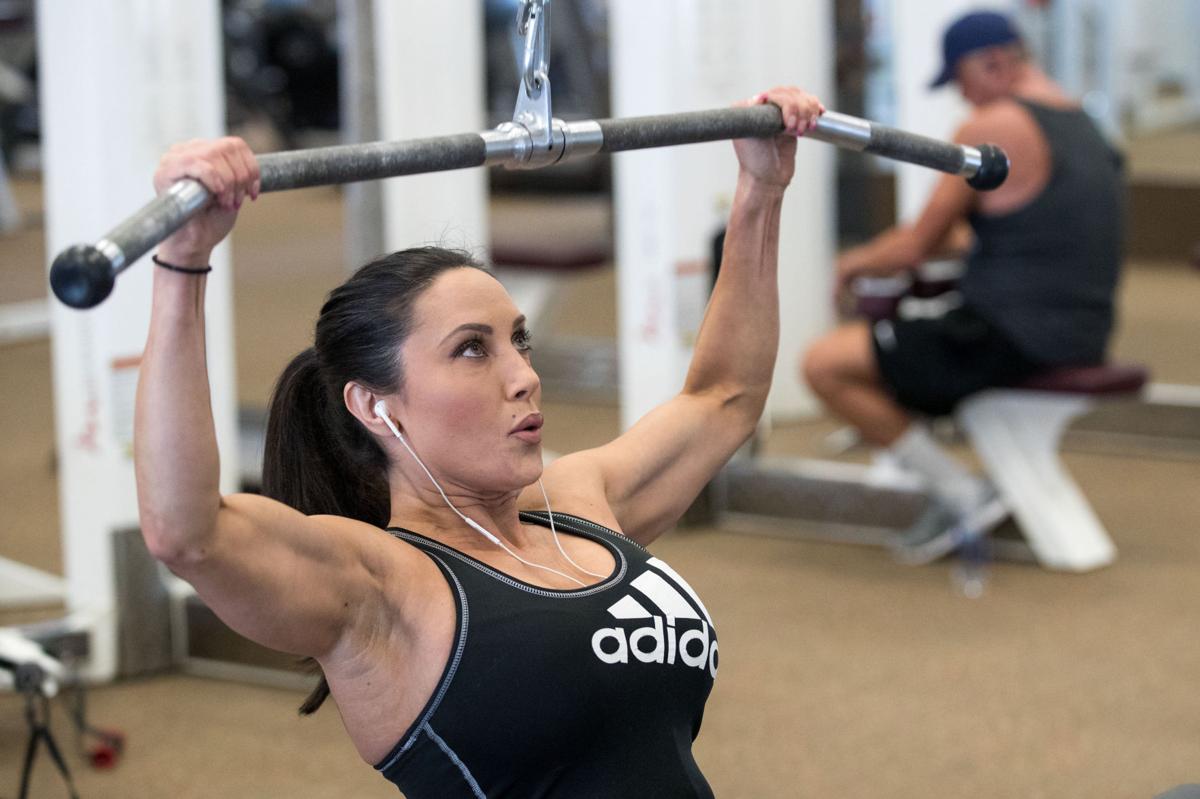 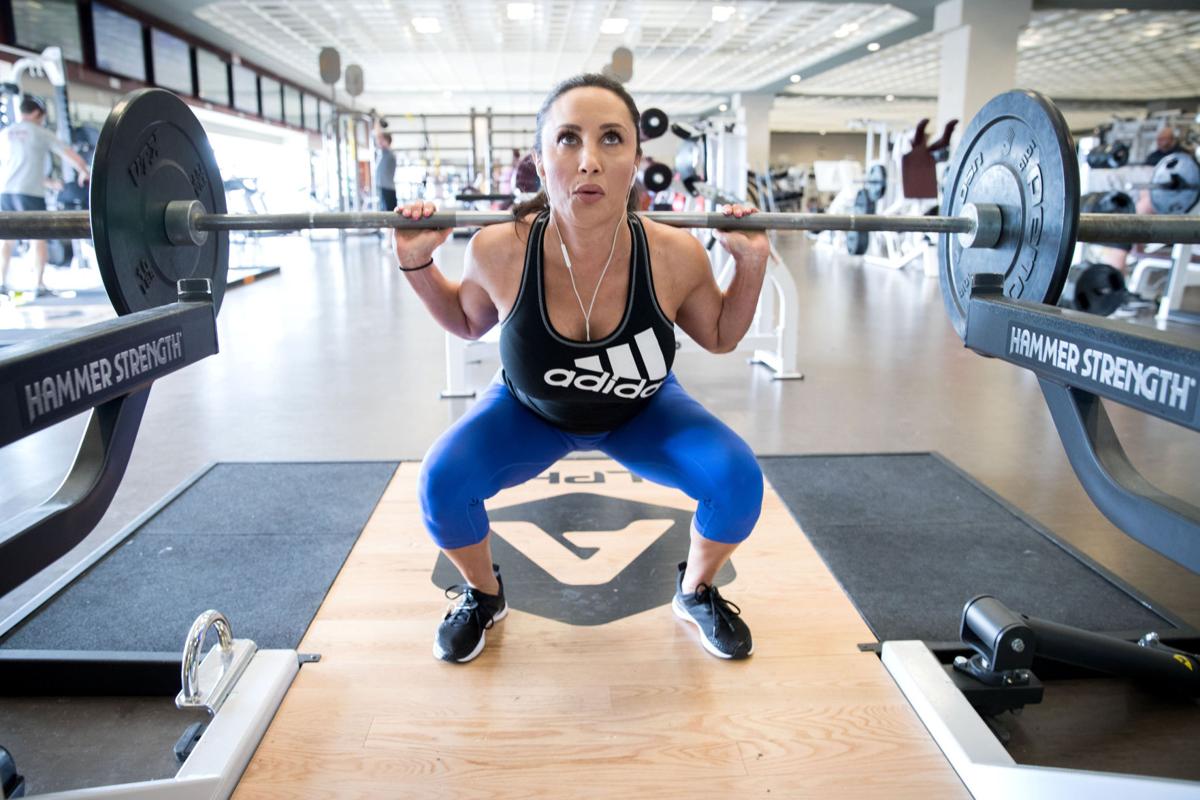 Margie Irfan works out at Life Time Fitness in Omaha. 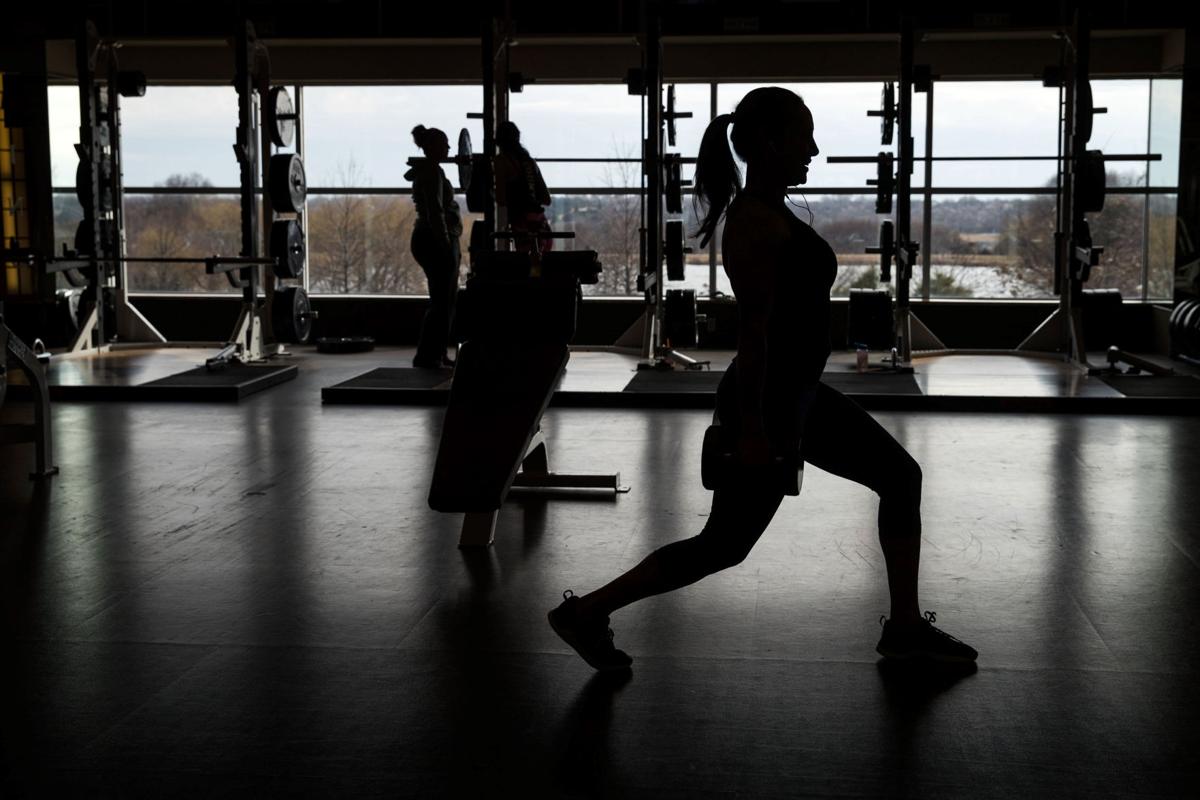 Margie Irfan, 50, of Omaha, became a bodybuilder at age 46 and quickly turned professional. Irfan does lunges with barbells at Life Time Fitness. 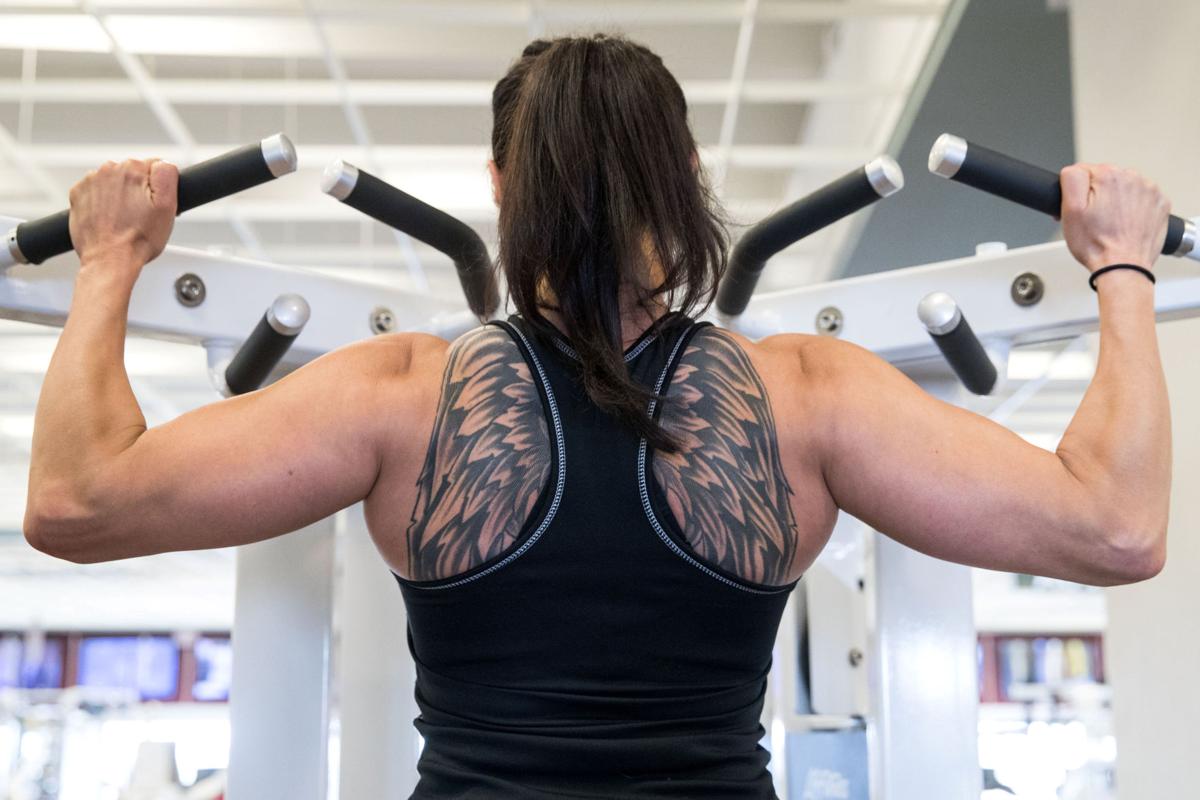 Irfan sports her wings tattoo while working out. 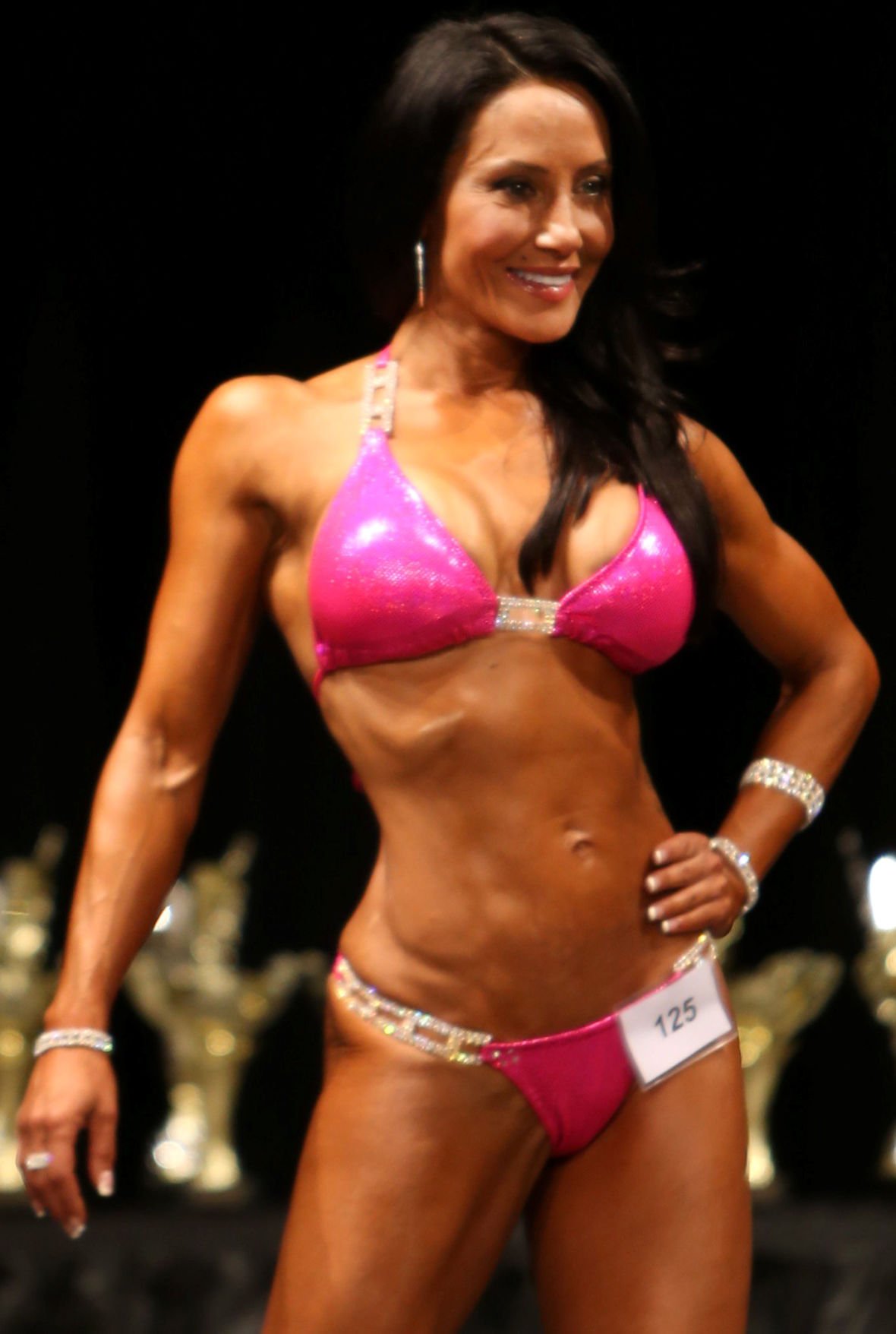 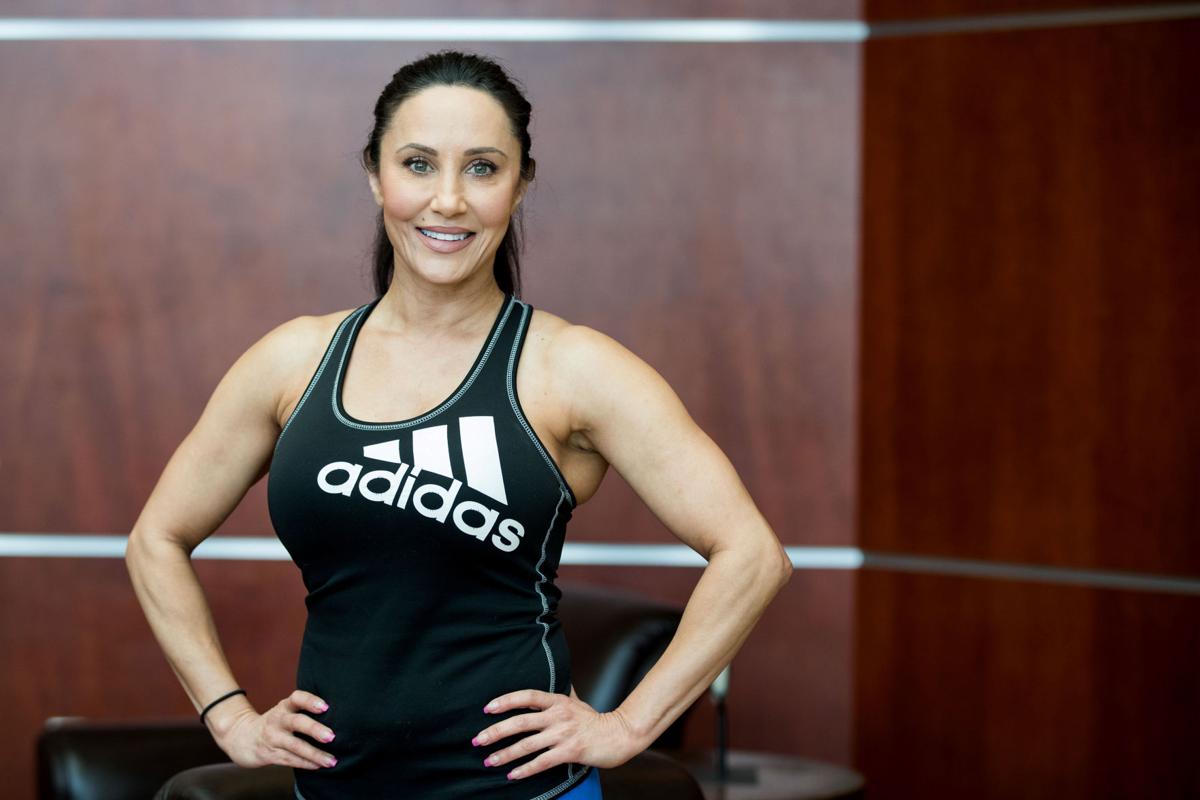 Irfan poses for a portrait.

It took a lot of praying before Margie Irfan could summon the strength to walk on stage in a teeny, tiny sparkly blue bikini.

Even though she was more than ready, nerves nearly got the best of her.

But after 10 weeks of training, changing her diet and attending a handful of posing courses, she got her long-awaited transformation. Irfan, then 46, won her first bodybuilding competition and went pro.

“I wouldn’t say I’m obsessive about anything. I’m just determined about things,” Irfan said. “I like playing by the rules, and I’m highly compliant. I was determined to see a change.”

Now 50, those lifestyle changes have stuck. The Omaha woman has lost 10 percent of her body fat while maintaining the same weight — and she’s got the toned muscles to prove it.

Before Irfan started training for that competition about four years ago, she had been visiting the gym for about two years. Trying to use the equipment around other gym-goers was daunting. Irfan would have to read instructions posted on each machine before attempting to use them.

“It’s intimidating,” she said. “You go and people are using the machines around you. You’re just trying to copy what they’re doing without really understanding what you’re trying to do.”

Irfan got a second wind when a high school friend posted photos of bodybuilding competitions. If her classmate who was the same age could do it, Irfan thought, so could she. The two, who are both hairstylists, happened to cross paths while at a beauty supply store the next week.

“My faith is incredibly strong,” Irfan said. “Running into her was definitely something that was set up by (God).”

Irfan’s friend invited her to work out at her gym. After a test run, Irfan decided to commit to the training. She started working out with trainers four days a week. She took what she learned and has since applied it to training on her own at Life Time Fitness.

She spends 45 minutes in the gym’s weight room during workouts. She usually alternates between working her upper body and lower body.

Unlike many gym-goers, Irfan focuses on proper form and technique, said Kraig Peterson, who works out at the same west Omaha gym.

“It’s not about just being here and trying to look good,” Peterson said.

During a recent workout, Irfan held weights while doing lunges across the weight room. With headphones on, she used multiple machines to work on toning her arms. After particularly tough workouts, Irfan said it’s a challenge to lift a blow-dryer at the salon.

Peterson said others can take inspiration from Irfan, who started her fitness journey later in life.

“It’s never too late to get started. She has the drive, dedication and the know-how to succeed,” Peterson said.

Eventually, the diet became routine, so much so that she began to crave the simple foods.

“If you were given a cheat day, those foods didn’t sit well in your body anymore,” Irfan said.

Irfan started feeling the effects of her lifestyle changes. She had more energy during the day while at work, and she was sleeping sounder than ever.

Posing coach Lisa Matthew is the one who encouraged Irfan to compete four years ago. They met when Irfan attended one of Matthew’s posing sessions on a whim.

After the session, where Irfan learned the proper poses in shorts, a tank top and heels, the coach asked what competition Irfan would be entering.

When she said none, Matthew replied, “Oh, honey. You’re ready.”

Irfan looked around the mirror-lined room and thought that she didn’t look so bad. In fact, she looked like some of her competition-ready peers.

And it was a good thing — the competition in Missouri, hosted by the North American Natural Bodybuilding Federation, was just two weeks away.

Since their first meeting, Matthew knew Irfan was the total package. She said Irfan has the right symmetry, leanness and curves, as well as poise and beauty.

“There’s that X-factor when you get on stage, and there’s a confidence. Margie has all of that,” Matthew said.

Women’s bodybuilding has four categories: bikini, figure, physique and bodybuilding. Irfan competes in the bikini category. Irfan described it as “being beach ready with some muscular tone.” She enters natural competitions, which means no performance-enhancing substances are allowed.

Now Irfan participates in two bodybuilding competitions a year. She continues to work with Matthew for guidance.

“You have no idea Margie Irfan’s heart by just taking a look at her in high heels and a sequin bikini,” Matthew said. “The most beautiful part is that she embodies such a complete woman. She’s an amazing mom, an amazing friend. She’s an amazing woman of God and she just happens to be a pro bikini chick.”

Within the last six months, Irfan strayed from prepped, clean meals and put on a few extra pounds. To the average eye, the added weight isn’t noticeable, but Irfan’s working to take it back off.

She wants to set an example for others showing them that a healthy lifestyle can lead to a transformation.

“Lifting weights doesn’t necessarily mean you’re going to turn into a huge, bulked-up person,” Irfan said. “I want to encourage other women not to be intimidated and think it’s too big of a task to be healthy and transform your body, mind and spirit.”

“I’ve never stuck with something for so long,” Mindy Wiese said. “Every pound was a lot for me.”

But Charlene Nilsen’s trainer, Lawrence Dawson, knows where her body has been in ways that most trainers could never understand. Dawson is 80.

'I want to take care of myself': Diabetes diagnosis inspires Omaha woman to reinvent lifestyle

Six months after Lisa Wright changed her diet and started exercising regularly, she lost 15 pounds and was taken off all of her medications.

“It just started clicking. He got better and better. As he learned, he taught me, and he progressed beyond belief,” said Josh Nelson, who called John Hansen one of his mentors.

Looking the part of a youthful, healthy and active person hasn’t always been the case for the Papillion man.

This bodybuilder's heaviest lift is revealing his disabled hand

Bodybuilder, powerlifter and motivational speaker Chris Ruden was ashamed of his disabled hand for most of his life, and he hid it under a cloth glove for 17 years.

Margie Irfan works out at Life Time Fitness in Omaha.

Margie Irfan, 50, of Omaha, became a bodybuilder at age 46 and quickly turned professional. Irfan does lunges with barbells at Life Time Fitness.

Irfan sports her wings tattoo while working out.

Irfan poses for a portrait.