UNMC student suffered a major stroke at 30. Three years later, she has her doctorate
0 Comments
Share this
1 of 3 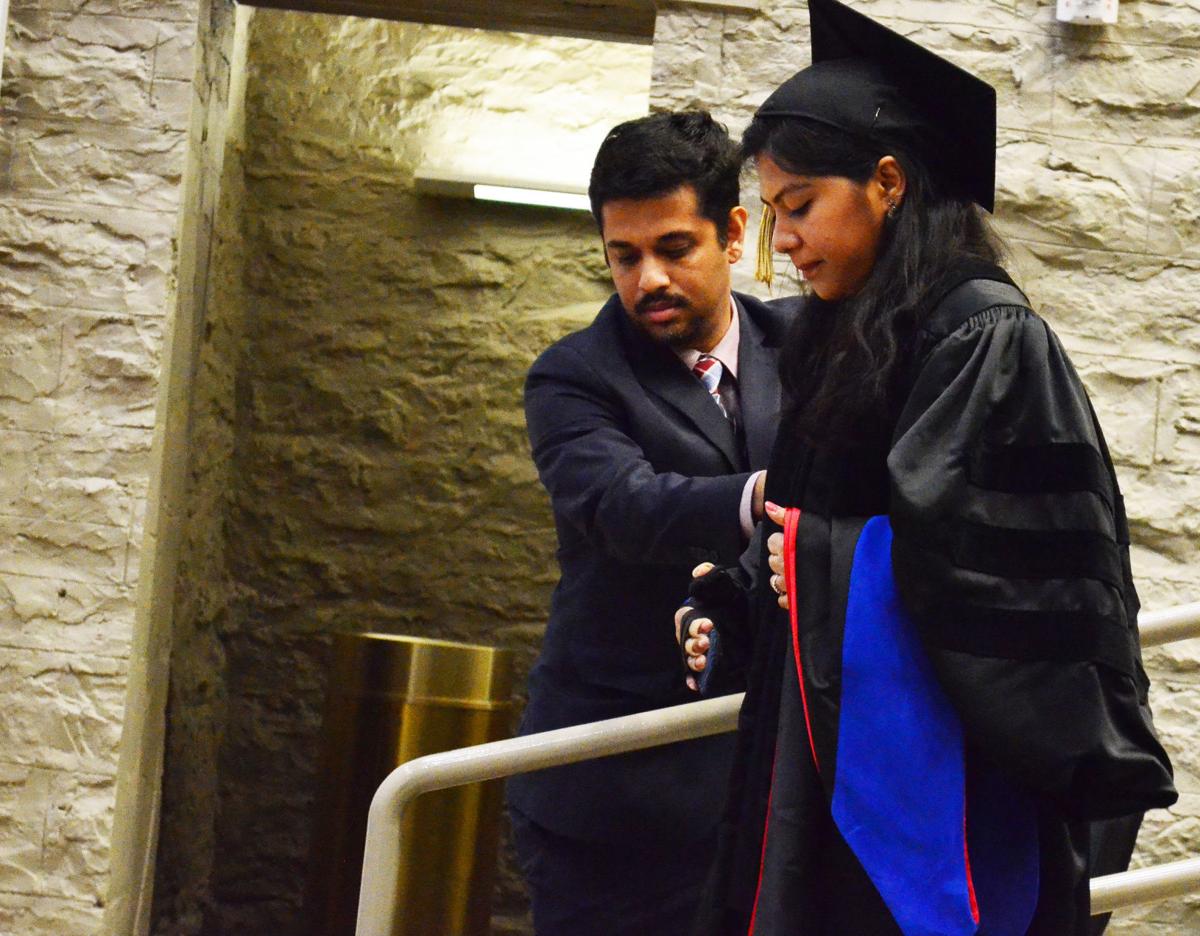 Soumitra Bhuyan helps his wife Urmi Basu down the stairs before her graduation ceremony earlier this month. Basu was set to graduate three years ago, but suffered a stroke. 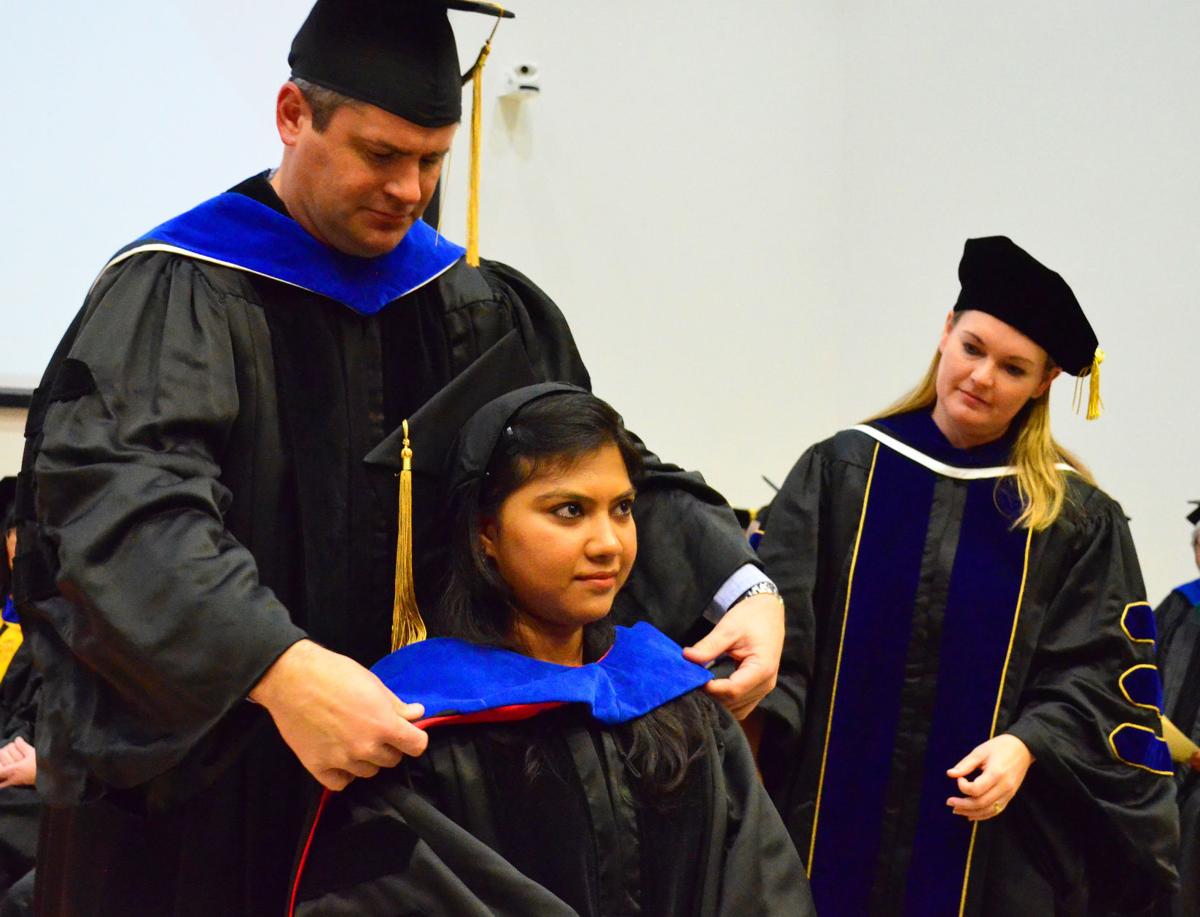 Urmi Basu is hooded by her mentor, Matthew Zimmerman. At right is Kendra Schmid, assistant dean for graduate studies at UNMC. 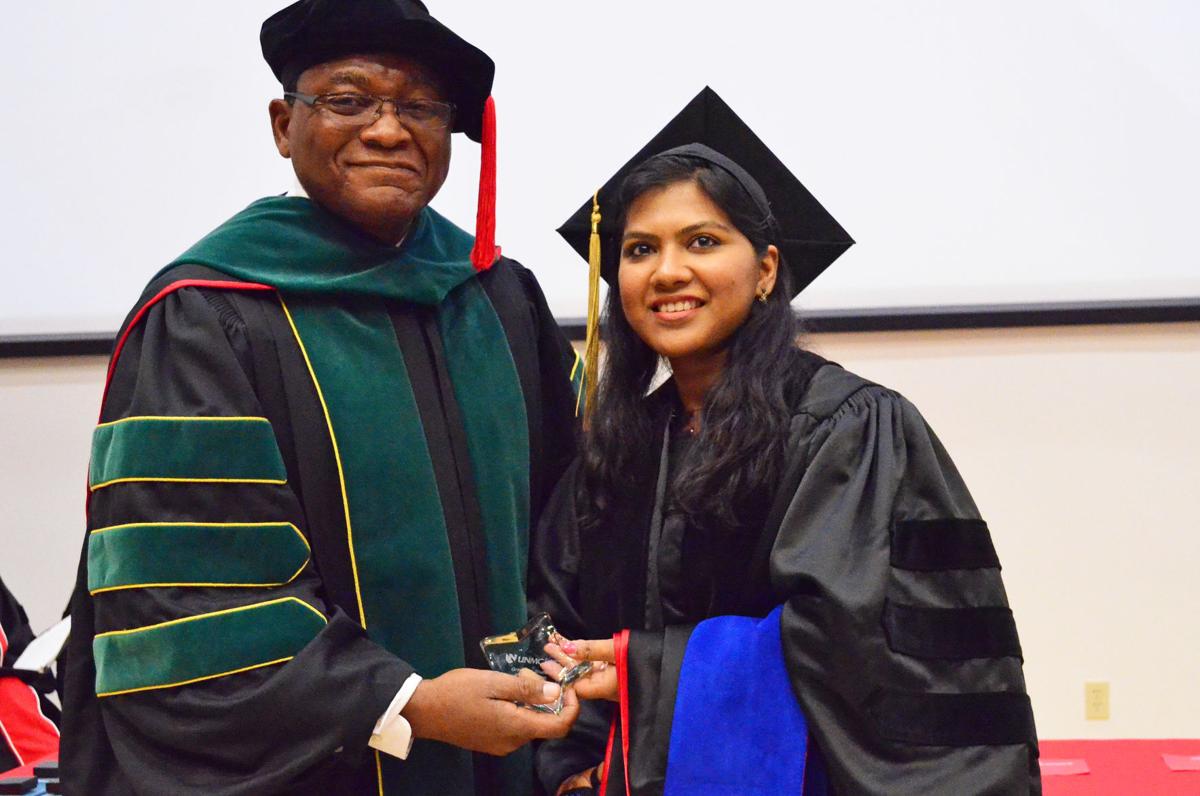 Urmi Basu, right, with Dele Davies, senior vice chancellor for academic affairs and dean of graduate studies at the University of Nebraska Medical Center. After suffering a stroke at age 30, Basu went through three years of intense rehab before earning her doctorate at UNMC earlier this month.

Urmi Basu was all set to walk across the stage to earn her doctorate from the University of Nebraska Medical Center.

But five days before the big event, surgeons were performing a craniotomy on Basu.

The then-30-year-old had suffered a major stroke. Basu was paralyzed on her right side and struggled to speak.

After three years of intense rehabilitation, Basu, 33, returned to Omaha earlier this month for graduation. She was named a graduate student of distinction, the university’s highest honor for grad students , three years to the day of her stroke.

“It was a very humbling experience to be able to walk across that stage,” said Basu, whose doctorate degree is in physiology.

Before her stroke in 2015, Basu wrapped up some Christmas shopping and met her husband at his office before dinner. The last thing she remembers was experiencing a strange feeling in her arm. Basu collapsed and was unconscious.

Her husband, Soumitra Bhuyan, took her to the emergency room. Doctors discovered bleeding in her brain and told her it was caused by some blood vessels that weren’t properly formed.

“It was actually kind of a time bomb,” her husband said.

Doctors removed part of her skull to relieve swelling, and Basu spent several days in the intensive care unit.

When she woke up, she couldn’t move her right leg or hand. She tried grabbing anyone who came close to her bed but couldn’t.

She was also struggling to speak. She was later diagnosed with aphasia, a communication disorder that impairs the ability to speak, understand language, read and write.

Basu is a great speaker, her husband said. Before the stroke, she often gave speeches and presentations at conferences. Seeing her struggle with language was difficult.

Basu was transferred to the Shirley Ryan AbilityLab, formerly known as the Rehabilitation Institute of Chicago, for further treatment.

About one in three stroke patients experience aphasia, said Leora Cherney, a researcher and clinician at the Shirley Ryan AbilityLab.

When she first arrived, she could repeat simple, single syllable words, Cherney said. She could follow simple commands. But she couldn’t read very much and couldn’t write at all.

“Aphasia is not a problem of intelligence,” Cherney said. “It really is a language issue.”

It was rewarding, Cherney said, to see things click for Basu.

“Recovery and rehabilitation is a very slow process,” Cherney said. “Right now it’s been many years. She’s going to continue to make improvements.”

Basu continues to go to therapy at home in Memphis, Tennessee. She’s able to walk with a brace.

The stroke put a dent in her plan, but returning to work as a scientist feels within reach, Basu said.

Being back at UNMC for graduation was an honor, the couple said.

It’s where they met. It’s also where they said they would name future children Emile (pronounced Em-il-ee), after the street running through campus, or Michael and Sorrell, after the Michael F. Sorrell Center for Health Science Education. And during Basu’s treatment, they sought second opinions from med center staff.

“Three years down the lane, I am happy and feel extremely grateful and humble and fortunate to overcome all of this,” Basu said.

Thanks to Snapchat, Omaha woman gets lifesaving stroke medicine with 12 minutes to spare​

"We can potentially save her life or kill her," said Dr. Vishal Jani, a neurologist who treated Darnisha Ladd.

Brain aneurysms give spirited Bellevue woman 'new outlook on life'; now she's back at the gym

“So much spirit comes out of her. No matter what kind of day she’s having, she spreads joy,” said gym owner and instructor Naviere Walkewicz.

While many people know carbon monoxide poisoning can be deadly, the fact that it can cause brain injuries — and with them, long-term aftereffects — is not as widely known.

Time is running out for federally funded mental-health clinics

Lawmakers in both parties have committed to boosting mental-health and addiction treatment to address the opioid epidemic, but new funding for the behavioral-health clinics initiative was not included in the $8.4 billion package Congress passed in October.

Tyler Trent, a former Purdue University student and enthusiastic college football fan who inspired many with his battle against cancer, has died. He was 20.

When Malik Paulson woke up days after the accident, he was on a ventilator. He was paralyzed from the shoulders down.

13 Nebraska counties have no primary care doctor. Here's what UNMC is doing to reach rural areas

UNMC has been working at this for years. The problem is sure to persist as urban America grows in population and rural America shrinks.

Omaha pastor loses more than 200 pounds, beats cancer; 'I want to experience the life I kept myself from'

She decided to overhaul her habits. When she left the hospital, on her 42nd birthday, she started her weight-loss journey.

'It's a miracle': 98-year-old Omahan survives stroke, is back to her spunky self two days later

Last month, Leota "Lee" Brown suffered a stroke. Two days after the incident, she was back to her spunky self at home in assisted-living facility Immanuel Village. She's required no therapy since the incident.

An Oklahoma man stretched and popped his neck. He tore an artery and suffered a 'major stroke.'

Less than an hour later, Josh Hader would be in a hospital emergency room unable to walk and suffering from what doctors told him was a "major stroke" caused by a tear in an artery in his neck that had formed a clot.

Rochelle Swanson, 39, wouldn't make it to her shift at Methodist Hospital as scheduled. Instead, the Gretna woman ended up as a patient there after a stroke.

Thanks to a quick response from people in her Pilates class and Omaha medics, Nicole Hamill was treated for a stroke and back in the studio two weeks later.

Soumitra Bhuyan helps his wife Urmi Basu down the stairs before her graduation ceremony earlier this month. Basu was set to graduate three years ago, but suffered a stroke.

Urmi Basu is hooded by her mentor, Matthew Zimmerman. At right is Kendra Schmid, assistant dean for graduate studies at UNMC.

Urmi Basu, right, with Dele Davies, senior vice chancellor for academic affairs and dean of graduate studies at the University of Nebraska Medical Center. After suffering a stroke at age 30, Basu went through three years of intense rehab before earning her doctorate at UNMC earlier this month.