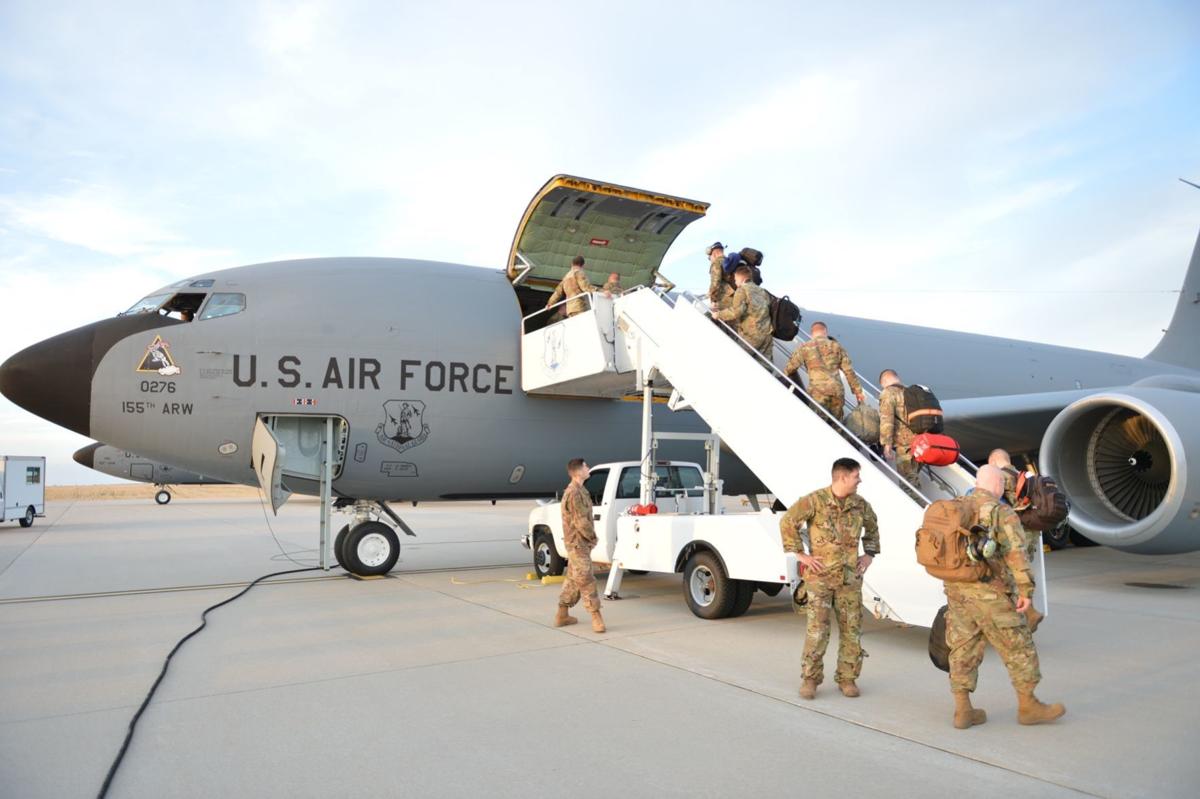 Airmen with the 155th Air Refueling Wing walk the air stairs onto a KC-135 Stratotanker last week at the Nebraska National Guard air base in Lincoln in preparation for deployment. 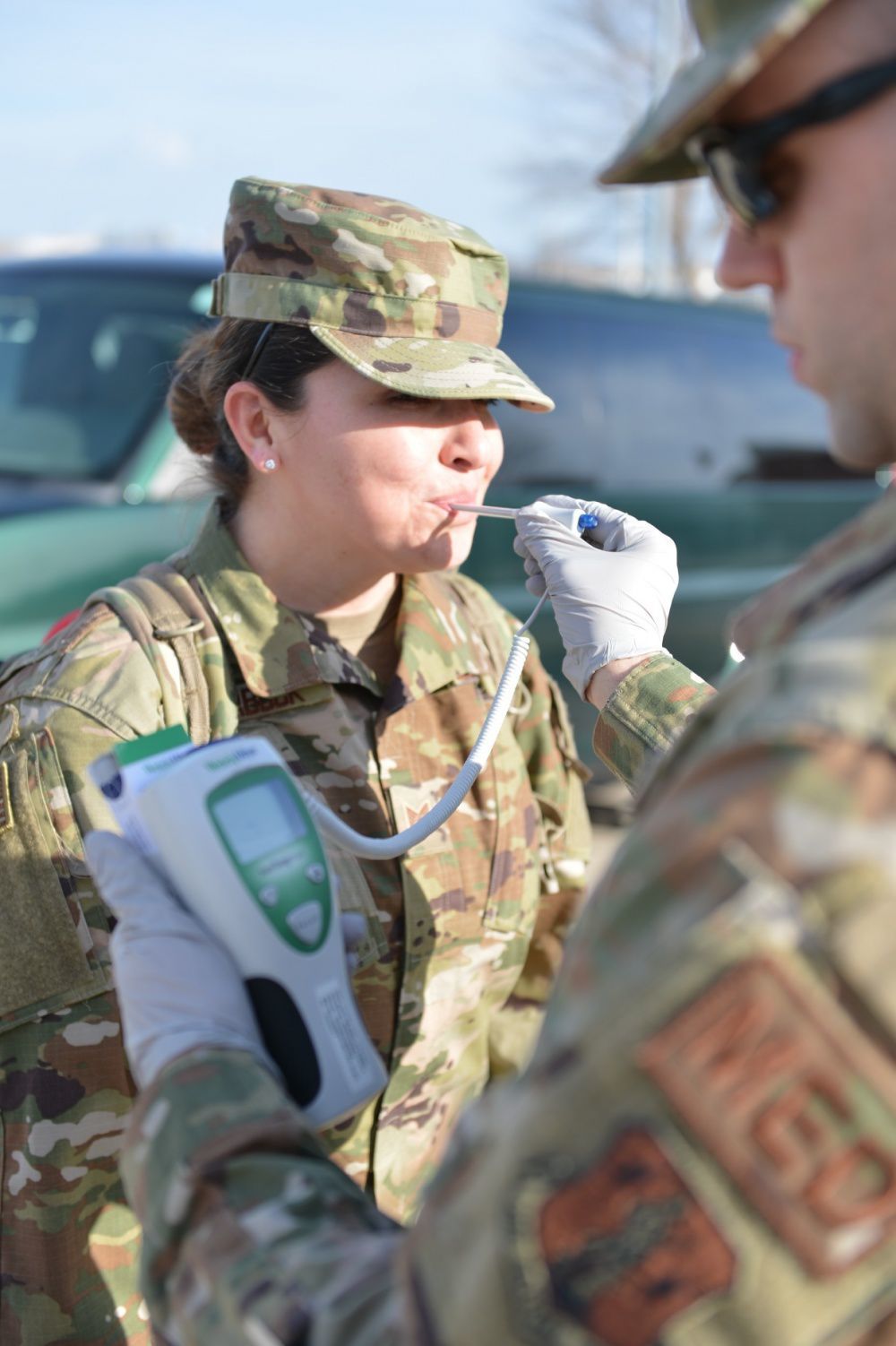 An aerospace medical technician takes the temperature of Tech Sgt. Diana Starbuck, a knowledge operations manager craftsman with the Operations Group of the 155th Air Refueling Wing, before takeoff from Lincoln Airport.

In the midst of the global pandemic, about 50 members of the Nebraska Air National Guard deployed last week for military operations in the Middle East. And their departure, complete with social distancing and medical screening, showed what military operations may start to look like in the age of coronavirus.

The deployment by the 155th Air Refueling Wing is part of a recurring rotation to support military forces in Iraq and Afghanistan. It has been scheduled for 16 months, Nebraska National Guard officials said in a press release.

“It is the same deployment that we’ve been supporting for a number of years,” Hargens said in a statement. “It’s really a critical resource in that theatre of operations.”

It’s the first deployment to take place in the shadow of the coronavirus pandemic. The deploying airmen took special medical precautions before boarding their KC-135R tankers at the Lincoln Airport’s National Guard terminal last week for the trip overseas.

The 155th Medical Group set up several stations for airmen to go through a required medical screening, according to the release. All airmen were checked by medical personnel for fevers, coughs and other symptoms. If anyone had failed any of the tests, they wouldn’t have been allowed to board the plane.

Other changes for the airmen included “touch-free” out-processing and a departure line set up to limit face-to-face contact as they finished off predeployment administrative work, said Lt. Col. Karl Durek, chief of Wing plans.

The Guard didn’t disclose where the Air Guard members will be serving. Past deployment locations have included Qatar and Afghanistan. The length of the deployment also wasn’t disclosed.

The Nebraska National Guard's 179th Cyber Protection Team, which was formed two years ago, is headed to Fort Meade, Maryland, for a year to help military and government agencies secure their computer networks.

She and her company drove supplies all over Iraq. It was scary and sometimes dangerous. At the time, she thought she was invincible. But the experience quickly made her grow up.

More than 350 members of the 155th Air Refueling Wing were part of largest deployment in more than a decade.

The plan represents the first major project in Nebraska in the post-9/11 nationwide campaign to build up Guard facilities.

A member of the Nebraska Army National Guard died Saturday following a medical episode during physical fitness training at the armory in Broken Bow.

After cancer diagnosis, veteran and his wife double their family with adoption of 3 foster children

“I know what it’s like to not be in control of your environment, to be displaced from your home,” Kala Stroh said. “It’s the satisfaction of providing stability to a family, when we’ve been through so much upheaval ourselves.”

As of noon Thursday, Douglas County had 116 confirmed coronavirus cases — the most in the state — followed by Sarpy County with 20 cases and Washington County with 19.

Health authorities haven't been able to make a connection between the woman and others with COVID-19, the disease caused by the novel coronavirus, so they've concluded that the case is a result of community spread.

Medical residents are hoping to tap Nebraska's "Big Red" spirit in showing support for health care workers across the state battling the coronavirus.

Gov. Pete Ricketts repeated Thursday that he’s not joining the crowd of governors issuing stay-at-home orders, despite urging from some fellow state executives. “Our plan is the right thing for us in Nebraska,” he said. “We need to do what’s right for Nebraska.”

The staff member has been off work for five days, the State Department of Health and Human Services said in a press release.

If the interest shown during a telephone town hall meeting hosted Thursday by Rep. Don Bacon, R-Neb., is any indication, there’s going to be a crush of filings for the billions of dollars aimed at helping small businesses and their workers through the downturn. At one point, more than 3,000 people were listening in on the meeting.

Lt. Sherie Thomas said that when officers went into the bar shortly before 4:30 p.m. Thursday, they saw four customers drinking alcohol and sharing a large pitcher.

Staff will be provided cotton twill masks made by the prison workforce. The reusable masks can be hand-washed.

Nebraska and UNMC are collaborating to develop an estimate of how bad the coronavirus could get in the Cornhusker State and whether Nebraska has sufficient capacity to handle the surge.

Katherine Ordonez and her crewmates aboard the Navy hospital ship are now home and in quarantine, after spending a month in New York aiding the beleaguered city’s hospitals during the COVID-19 pandemic.

Look, up in the sky! Nebraska Air Guard's hospital flyover is on again

The new route visits twice as many medical centers as last week's flight, which was scrubbed because of bad weather.

Airmen with the 155th Air Refueling Wing walk the air stairs onto a KC-135 Stratotanker last week at the Nebraska National Guard air base in Lincoln in preparation for deployment.

An aerospace medical technician takes the temperature of Tech Sgt. Diana Starbuck, a knowledge operations manager craftsman with the Operations Group of the 155th Air Refueling Wing, before takeoff from Lincoln Airport.