Omaha couple had fertility problems, so woman’s sister carried their twins
0 comments
Share this
{{featured_button_text}}
1 of 11 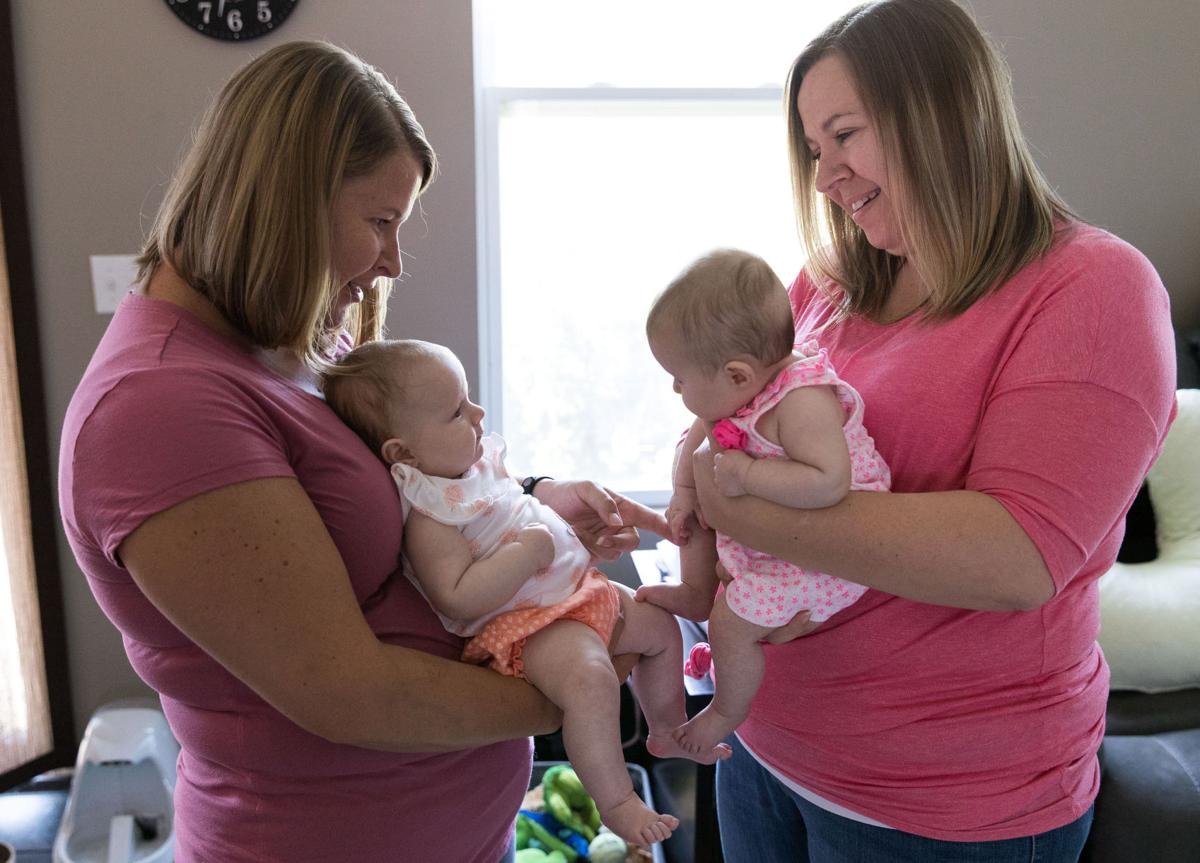 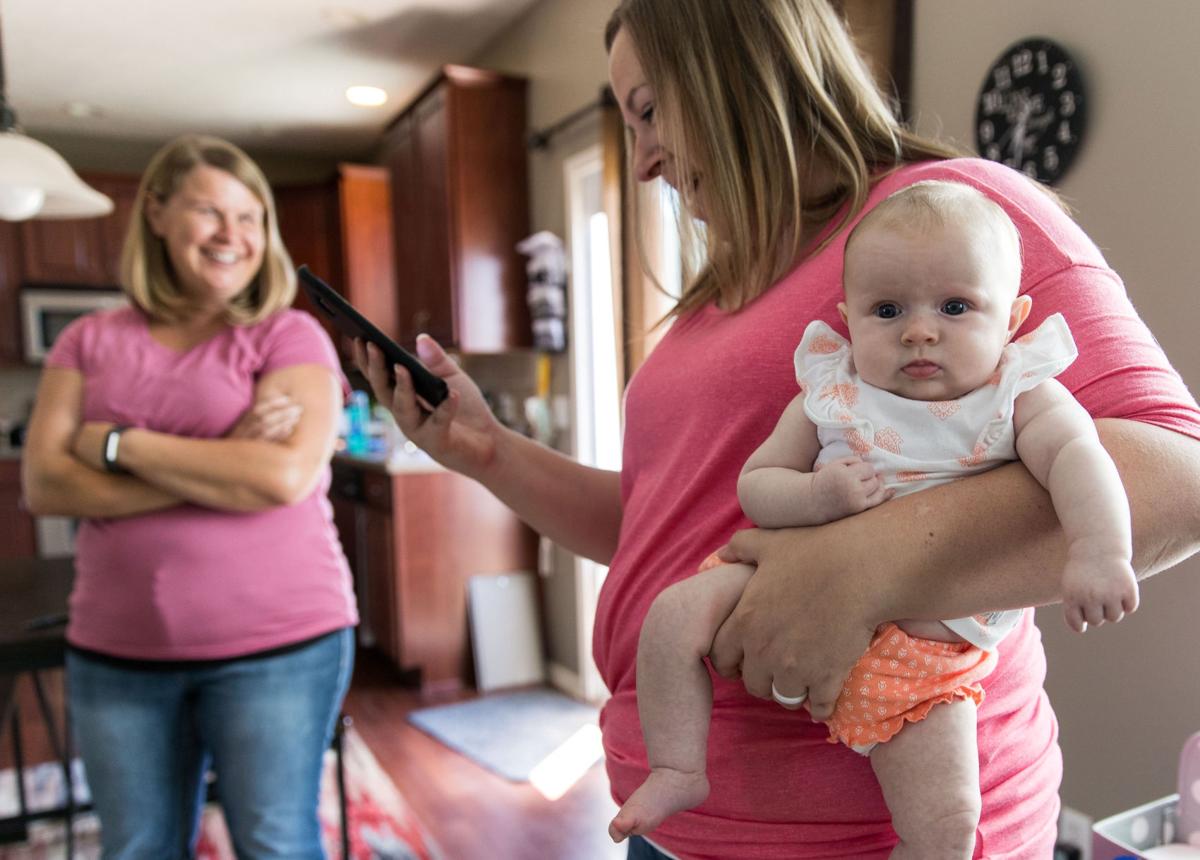 Melissa Kayser holds Ashlynn at her Omaha home. Kayser and her husband turned to surrogacy after struggling to have children. Melissa's sister Lisa Auten, left, volunteered to be a surrogate and gave birth to the twin girls in March. 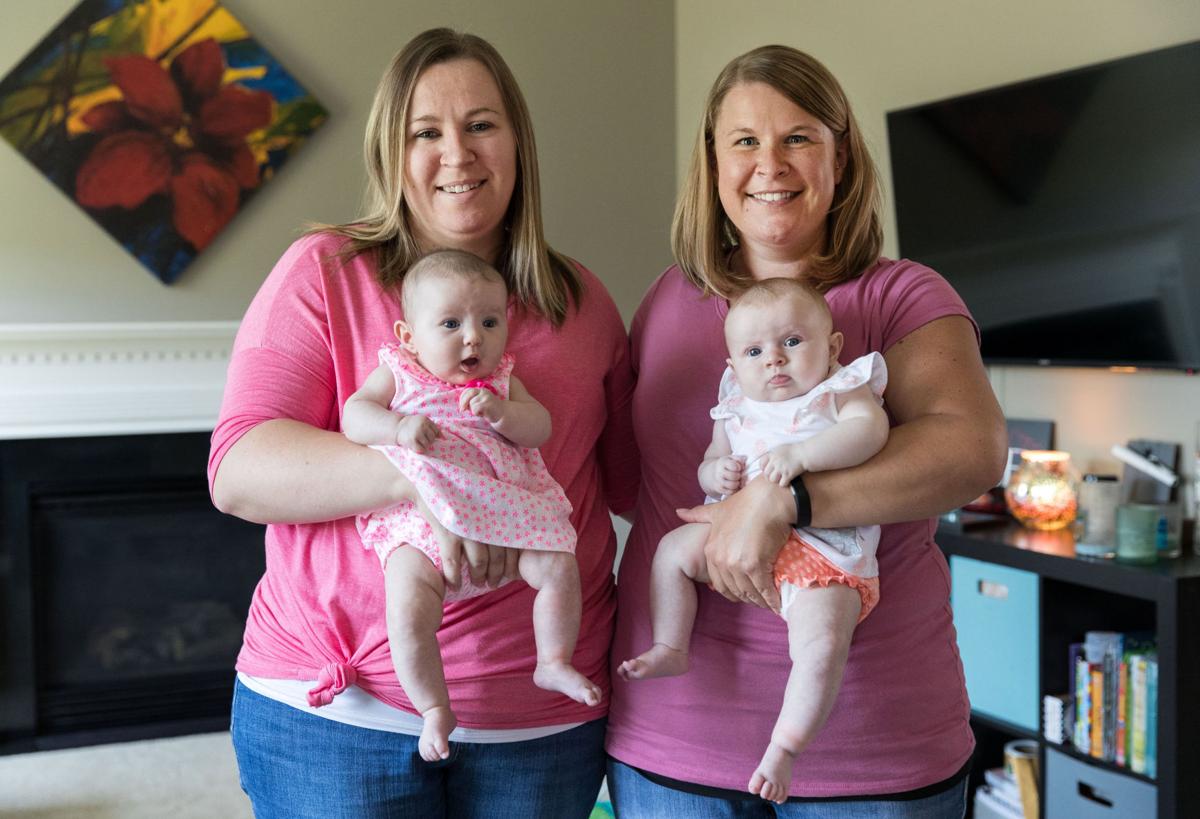 Melissa Kayser, left, holding Tierney, and her sister Lisa Auten, right, holding Ashlynn. Kayser, 33, and her husband, Court, 32, spent three years trying to have kids. In that time, the Omaha woman had nine miscarriages, including four after using in-vitro fertilization. 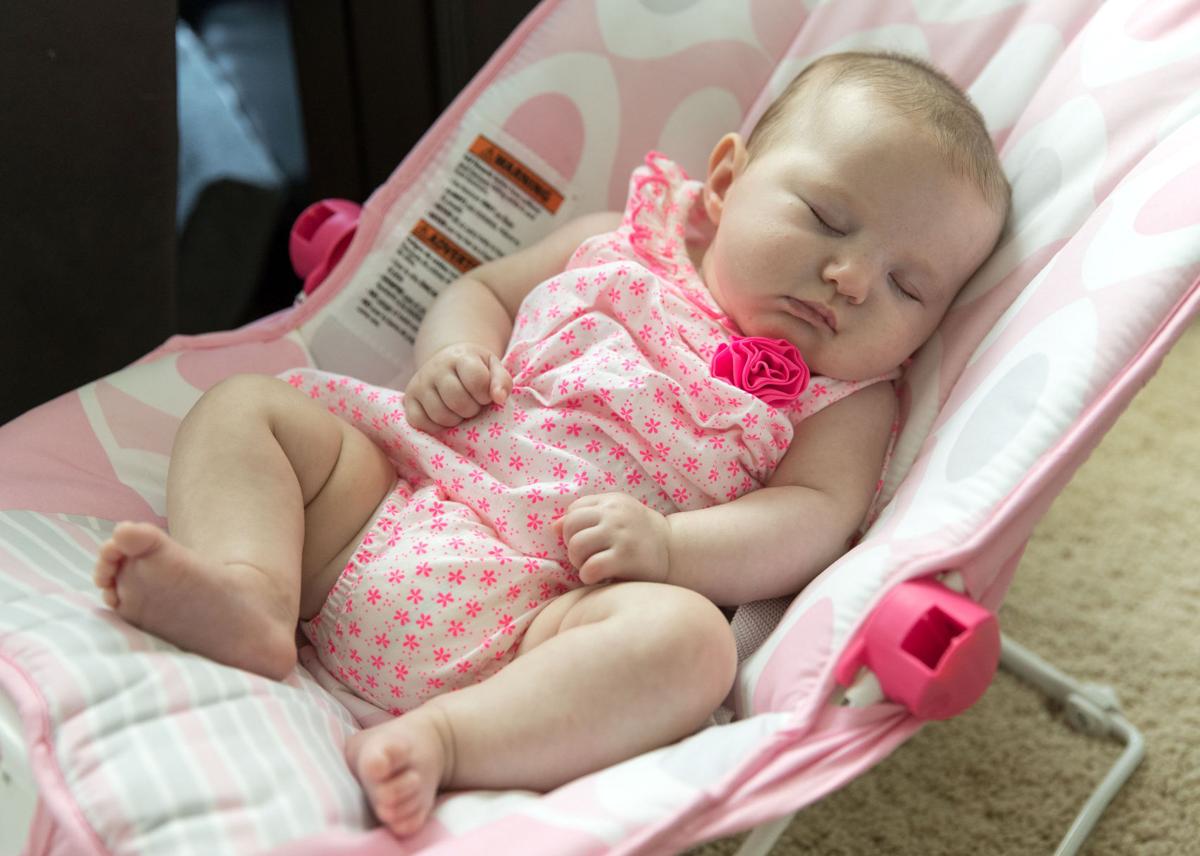 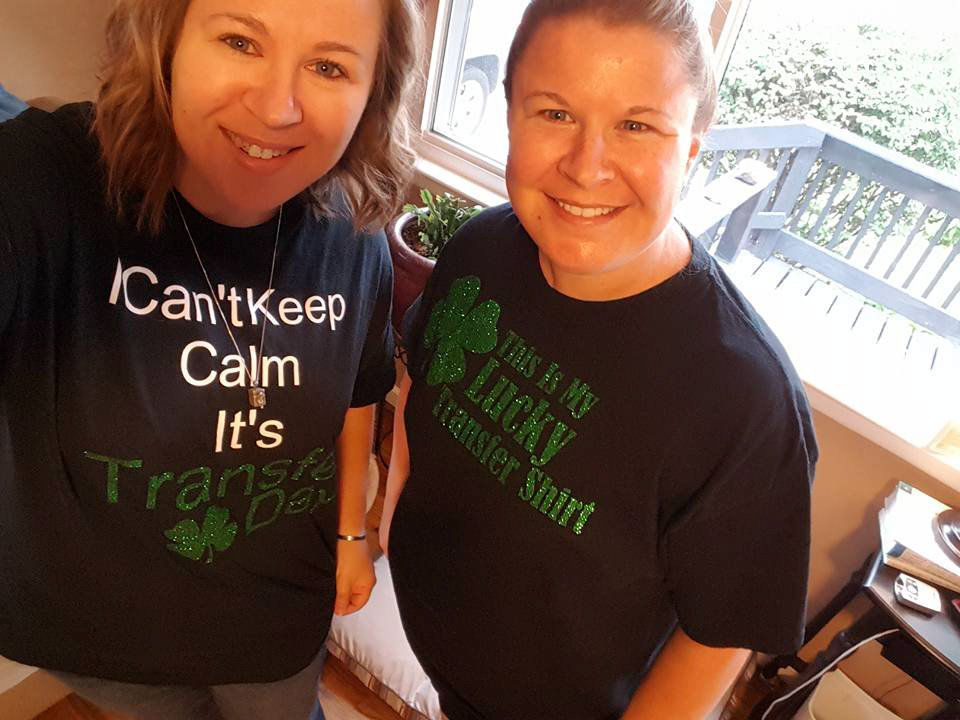 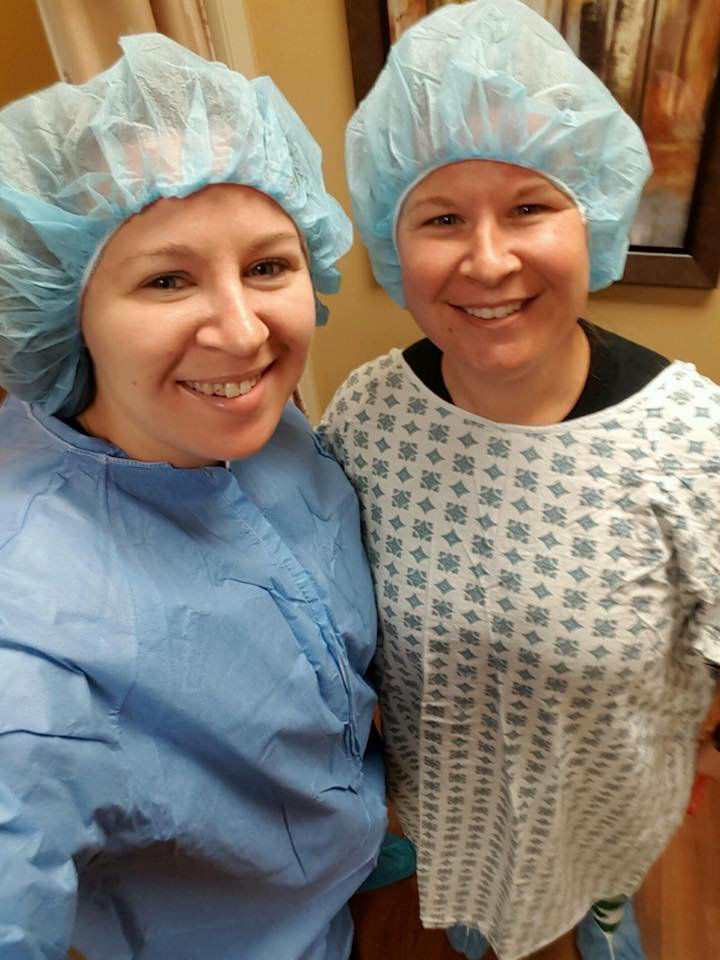 Kayser, left, and Auten just before the embryo transfer. 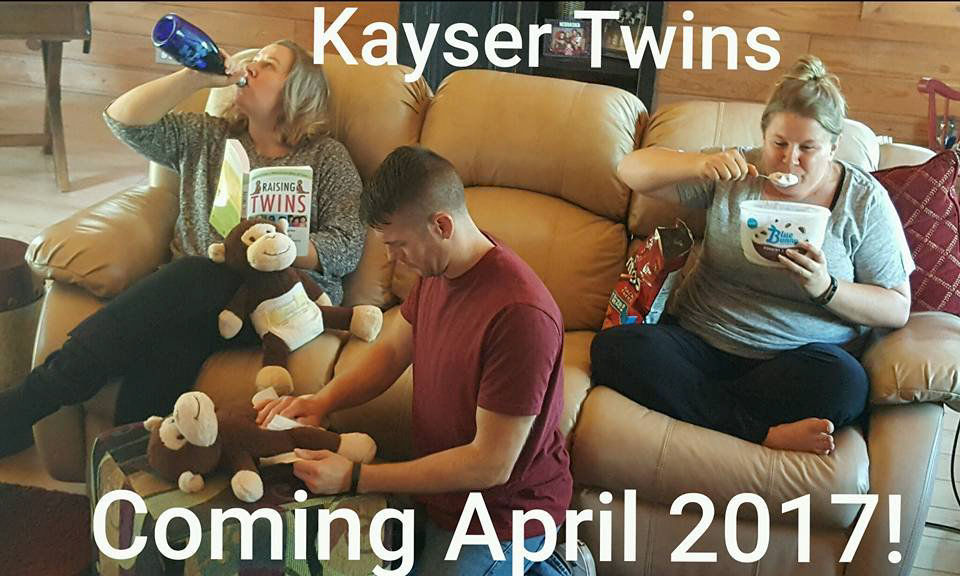 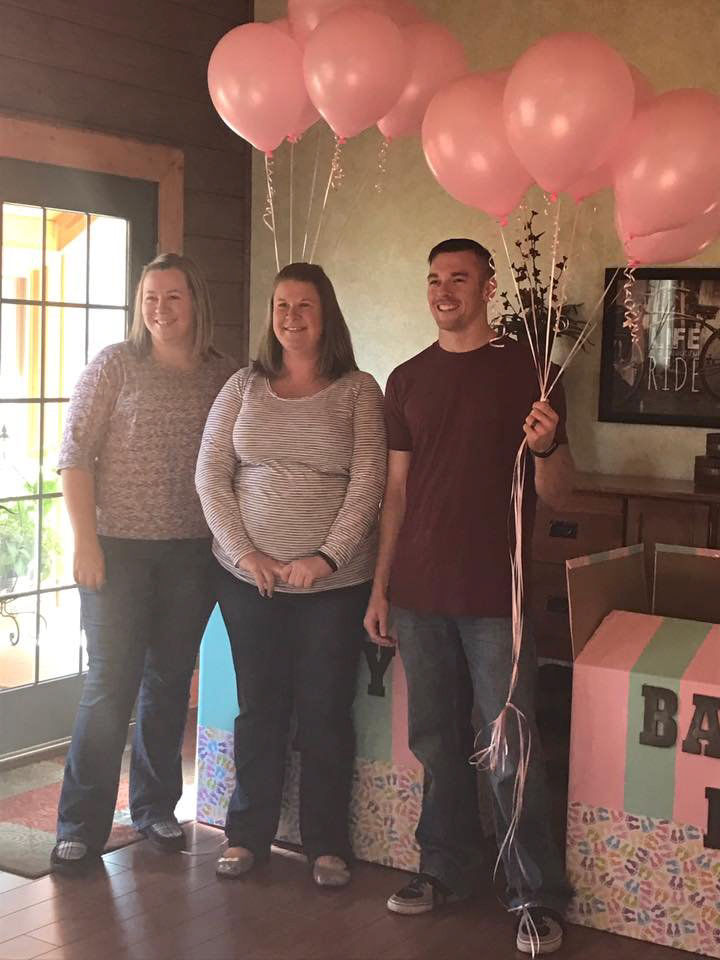 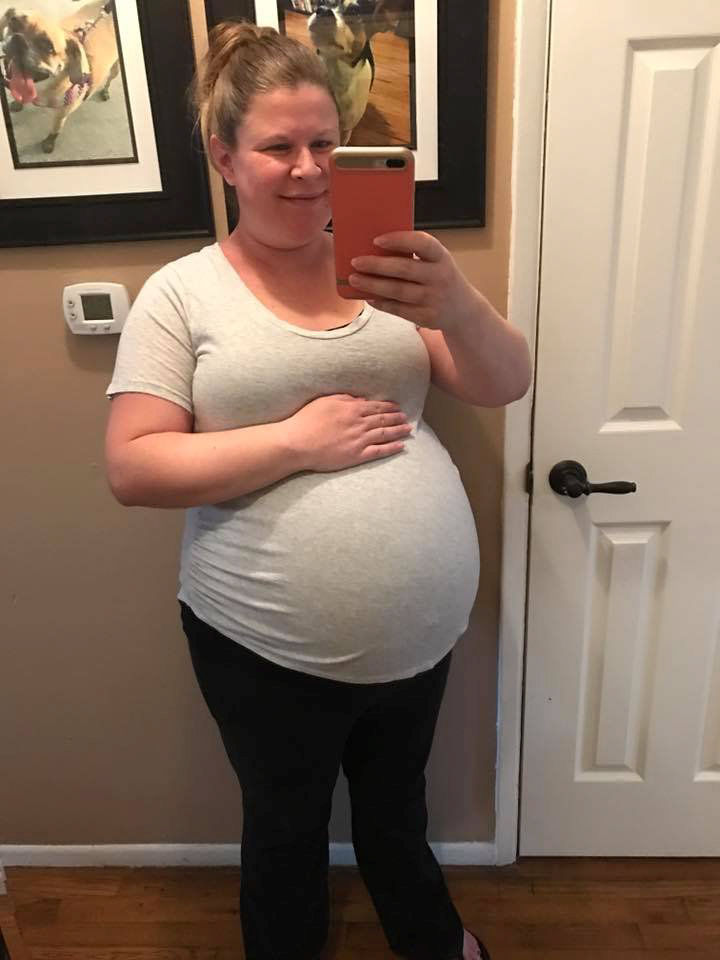 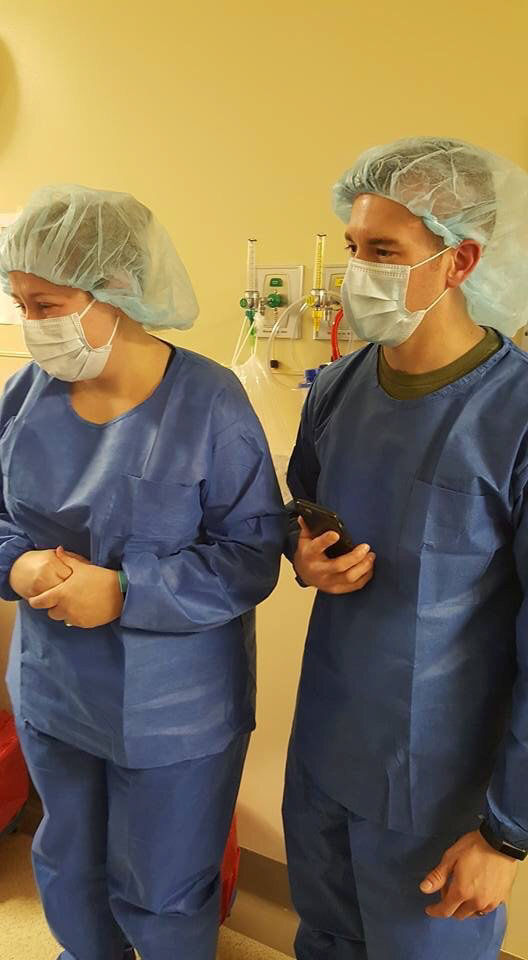 Melissa and her husband watch their babies being born. 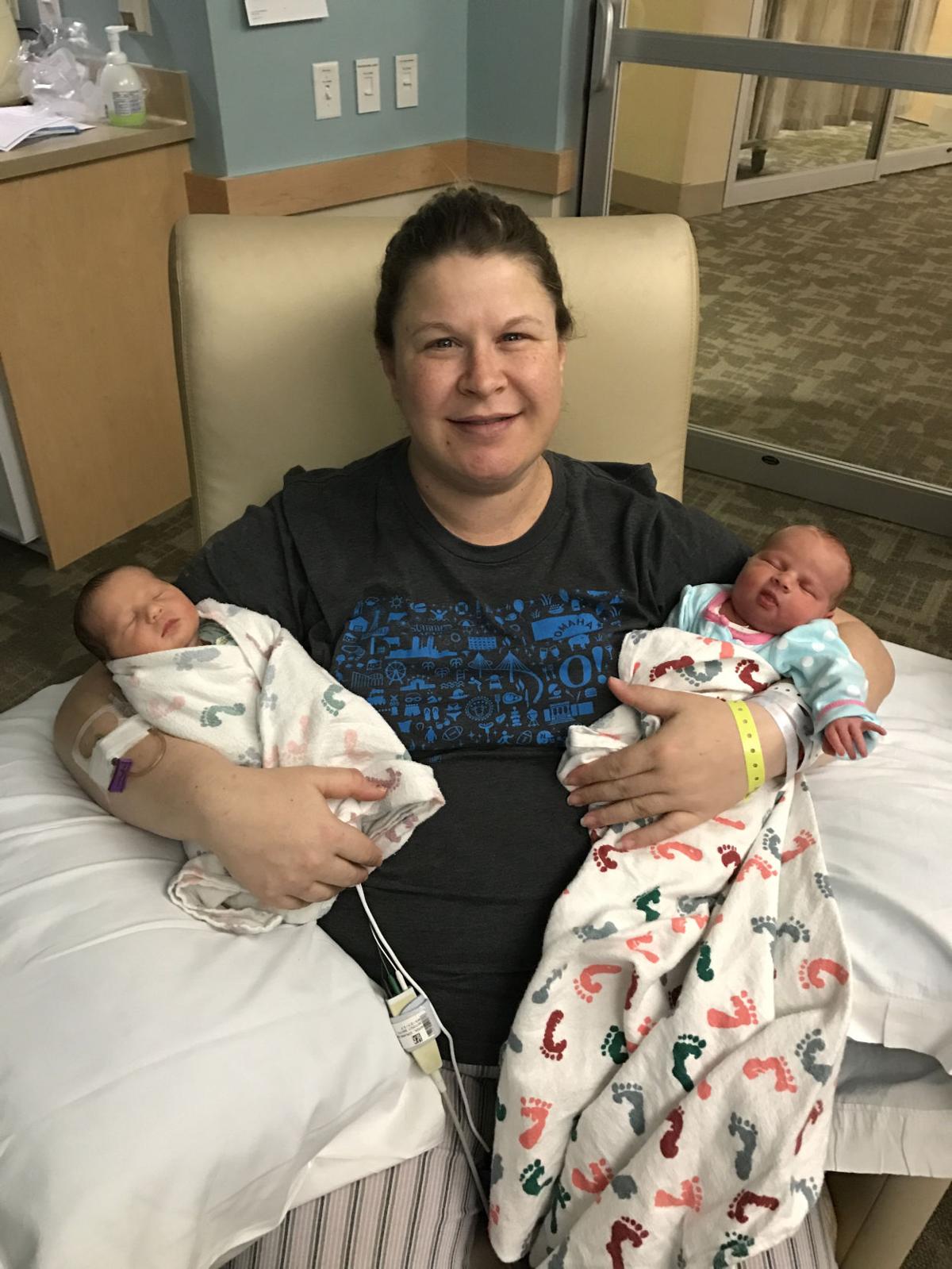 When Melissa Kayser’s twins are older, she knows just what she’ll tell them: Her belly was broken, so their aunt carried them instead.

Kayser, 33, and her husband, Court, 32, spent three years trying to have kids. In that time, the Omaha woman had nine miscarriages, including four after using in-vitro fertilization.

Kayser visited several fertility doctors, and none had answers as to why she couldn’t maintain a pregnancy.

“It felt like my body was just kind of failing me,” Kayser said. “I started to believe I was never going to be a mother.”

Doctors eventually suggested that Kayser rely on someone else to carry a pregnancy for her. When Kayser delivered the news to her family, her sister Lisa Auten chimed in.

“I, at first, said, ‘You can use my uterus,’ and we laughed,” Auten said. “Then as time went on, I told her I was serious. I would actually do this.”

Use of a gestational carrier — a woman who carries a pregnancy for another — has seen steady growth. Nationally, it has nearly tripled over the last decade, according to the American Society for Reproductive Medicine.

More couples may be turning to the practice because they’ve seen others use it successfully, said the group’s president, Dr. Richard Paulson. Same-sex couples as well as those who wait to start a family and encounter fertility problems may see it as an option.

Still, the practice isn’t common. Of almost 4 million babies born in the U.S. in 2015, a fraction of a percent — about 2,800 — were born via gestational carriers.

Nebraska doesn’t have laws governing the practice, which makes it risky for prospective parents. The biological father and birth mother — in this case, Kayser’s husband and sister — must be listed on the birth certificate. The biological mother — Kayser — has to adopt her own children, said Tracy Hightower-Henne, the Omaha lawyer handling Kayser’s case.

For as long as she can remember, Kayser wanted to be a mom. As a child, she often played with Barbie dolls, grouping them into families.

“When you’re younger, you have this vision of how your life is going to go,” Kayser said.

Auten, 35, has no children and said she doesn’t want any. Before the procedure last August, both Omaha women had to undergo psychiatric evaluations. Those sessions were a chance to discuss the situation and air any concerns.

“I had to accept that I wasn’t going to be able to carry my own child,” Kayser said. “There were a lot of times where I hesitated and asked, ‘Is this the right decision? Is this the right path?’ ”

Auten had to get approval from her primary care physician before moving forward.

Both women had to take several shots and medications. Kayser took medication to produce eggs; Auten was on medication that, among other things, made sure she didn’t ovulate.

Doctors transferred two embryos to Auten to improve odds for success. Five days later, she took a pregnancy test. When a faint pink color appeared, she started jumping up and down in her bathroom. She texted a picture to her sister.

Kayser was excited, but worried that her sister would have the same difficulty she did. Kayser had positive pregnancy tests, but never heard a heartbeat on an ultrasound.

At her sister’s appointment in September, she heard two. Kayser and Auten were shocked by the news of twins.

Using a gestational carrier can cost from $60,000 to $100,000. The Kaysers didn’t pay Auten but did pay for medical care that Auten’s insurance didn’t cover. They also purchased her maternity clothing and paid Auten’s legal fees.

Throughout the pregnancy, Kayser attended almost every doctor appointment, whether it was a five-minute checkup or an hourlong ultrasound. Auten played recordings to her belly of Kayser and her husband reading books. She sent back videos of the babies moving.

“It wasn’t just my pregnancy. It was theirs, too,” Auten said. “I went into the journey knowing and telling everybody that they weren’t my babies. I was just carrying them.”

The emotions involved in a pregnancy can be overwhelming, but Auten handled things matter-of-factly throughout.

Toward the end of the pregnancy, Kayser cleaned Auten’s house and did her laundry. She’d offer to go grocery shopping, and the sisters went out for pedicures.

A C-section was scheduled for March 28, at 36 weeks. But at a doctor appointment the day before, Auten had high blood pressure and a headache, symptoms that could lead to complications. So the babies arrived a day earlier. Kayser was in the delivery room.

“I was so in love with them already,” Kayser said. “I couldn’t believe they were finally here.”

The babies stayed in the neonatal intensive care unit for nine days to put on extra weight. For the Kaysers, that time was a baby boot camp where they practiced feeding, changing and caring for the newborns.

Now 4 months old, each girl weighs about 12 pounds and is more alert. Ashlynn is a goofball, her mother said. She’s always babbling and smiling. Tierney is mellow. She likes watching her surroundings.

Kayser and her husband read the books they had recorded for their daughters: “Guess How Much I Love You,” “The Very Hungry Caterpillar” and “How to Catch a Monster.”

Auten visits about once a week. She has a natural bond with her nieces. The best part for her, though, is seeing Kayser with twin daughters.

Kayser said she doesn’t know how to express how thankful she is for her sister.

Mom will need to adopt her own kids

Melissa Kayser is the biological mother of Tierney and Ashlynn. But to the State of Nebraska, she’s simply their guardian.

Nebraska law dictates that Auten is listed on the babies’ birth certificates, along with their biological father, Kayser’s husband.

So Kayser will have to adopt her children. And she can’t file for adoption until she’s lived with the twins for six months, said Tracy Hightower-Henne, an Omaha lawyer who practices family law at Hightower Reff.

In the meantime, Kayser has power of attorney for her children, which allows her to make medical decisions for the twins, among other things.

Over four years, Hightower-Henne’s firm has handled three cases involving gestational carriers, including Kayser’s. All have involved family or a close relationship between parents and the carrier.

Couples and the women who carry the pregnancies — known as gestational carriers — enter into a contract, though the contracts cannot be legally enforced in Nebraska or Iowa.

Contracts can lay out payment plans for medical care and how to handle medical problems that the carrier or baby might encounter. They also outline that the gestational carrier will relinquish parental rights after birth.

But without an enforceable contract, there’s a risk that the carrier may not have to give the baby to the biological mother, though Hightower-Henne isn’t aware of that happening locally.

She said the law needs updating to simplify things for parents like Kayser and her husband.

Kayser and her sister met in June with staff of State Sen. Mike McDonnell of Omaha to discuss introducing a bill to change the policy in the next legislative session. The sisters hope to eliminate the legal need for the biological mother to adopt her children.

'It just blew our minds': Identical triplets born to Nebraska couple are one in a million

Nebraska typically sees about 12 sets of triplets each year, according to a spokeswoman with the Nebraska Department of Health and Human Services.

Som Maya Rai, who has two other children, said that in Nepal it’s not uncommon for women to deliver at home, and even outside.

The reunion included a parade of parents and their NICU ‘graduates,’ which started at the hospital and wound down to the West Dodge Station Elementary School. Some children were costumed as Batman and other superheroes.

That leaves 2.4 million women of child-bearing age living in counties without hospitals that deliver babies.

The multibillion-dollar fertility industry is booming, and experimenting with business models that are changing the American family in new and unpredictable ways.

Melissa Kayser holds Ashlynn at her Omaha home. Kayser and her husband turned to surrogacy after struggling to have children. Melissa's sister Lisa Auten, left, volunteered to be a surrogate and gave birth to the twin girls in March.

Melissa Kayser, left, holding Tierney, and her sister Lisa Auten, right, holding Ashlynn. Kayser, 33, and her husband, Court, 32, spent three years trying to have kids. In that time, the Omaha woman had nine miscarriages, including four after using in-vitro fertilization.

Kayser, left, and Auten just before the embryo transfer.

Melissa and her husband watch their babies being born.