Risk of catching coronavirus on a plane is low, finds study co-authored by NU researchers
5 comments
Share this
Steve Liewer

A study co-authored by University of Nebraska researchers supports assertions by the airline industry that there is little risk of passengers infecting one another with COVID-19 while flying aboard commercial jets.

The scientists from the university’s National Strategic Research Institute spent more than a week in August conducting aerosol dispersion tests aboard a pair of United Airlines wide-body jets at Dulles International Airport near Washington, D.C. They worked with researchers from two private companies, Zeteo Tech and S3i.

The research team rigged a masked mannequin named Ruth to pump out a harmless aerosol every two seconds, meant to simulate the normal breathing of a person with COVID-19. Then they set up more than 40 sensors around the cabin to detect and monitor the aerosol particles.

The tests showed that only a tiny fraction (less than 1%) of the particles landed in the breathing space of other passengers, even those sitting in adjacent seats.

It also showed that 99.99% of particles were filtered out of the cabin air within six minutes. That’s because modern jet engines suck in huge quantities of air, push it into the cabin through super-efficient HEPA air filters, then circulate it top to bottom from ceiling vents and out through floor vents.

The study recommended that airline passengers and crew continue to wear masks, that thorough cleaning between flights continue and that air circulation systems be kept running at all times.

The command conducted the study because its mission includes flying service members from place to place on chartered commercial airliners it calls the Patriot Express.

In the August test, some 300 aerosol releases were performed over eight days and involved in-flight, simulated in-flight, and on-the-ground testing aboard Boeing 767-300 and 777-200 aircraft. They were selected because those planes are often used for Patriot Express flights.

United Airlines touted what it described in a press release as a “landmark study,” saying it “demonstrates that the risk of COVID-19 exposure on United aircraft is virtually nonexistent.”

But the study fell short of declaring air travel during the pandemic completely safe because of what it left out.

The study looked only at a simulation of tiny aerosol particles exhaled during normal breathing. It didn’t consider large droplets a person might expel when talking or coughing.

“If somebody’s sneezing or spitting at you, well then that’s different,” said Sean Kinahan, senior threat scientist for the NSRI, noting that droplets are heavier and might fly around the cabin instead of getting caught and filtered by the air-handling system.

The scientists also positioned the mannequin to face forward while remaining seated, without turning toward another person, talking to someone or walking around the cabin — all of which could lead to increased spread.

“In real life, people move around the plane, disrupting the airflow and probably resulting in higher exposures in some locations and lower exposures in others, compared to the study,” Linsey Marr, a professor of civil and environmental engineering at Virginia Tech, told the Los Angeles Times. “These real-life considerations could easily increase the risk by a factor of 10 to 100.”

The study also didn’t test other parts of a passenger’s journey by air, such as time spent in security lines, queuing up in the preboarding area, or waiting in the jet way. Nor did it simulate multiple passengers with a COVID-type disease on the same flight.

“It wasn’t meant to represent every possible situation you could be on an airplane,” said Dr. Joshua Santarpia, an associate professor at the University of Nebraska Medical Center and the NSRI’s research director.

Still, Kinahan said, the experiment offers evidence that an aircraft cabin is one of the safest indoor environments when it comes to exposure to the coronavirus.

The six minutes it takes to clear the aerosols from an airliner compares with 104 minutes in a typical single-family home and 35 minutes in a hospital operating room or patient isolation room, according to the study.

“Those of us that do aerosol science were surprised how quickly the aerosol cleared,” Kinahan said.

The transmission rate was so low, researchers estimated that it would take a flight of at least 54 hours before someone could possibly be infected through aerosol transmission, even on a plane that is completely full. That’s far longer than even the longest airline or Patriot Express flight.

A leading flight attendants union, the Association of Flight Attendants-CWA, cautiously welcomed the findings but urged airlines not to scale back safety measures already in place.

“This study affirms the importance of wearing masks. It also assumes ideal conditions with masks on throughout the flight and no movement in the cabin while onboard,” Sara Nelson, the union’s international president, said in a statement. “Airlines and regulators should not use this study to change or weaken current layered COVID safety procedures.”

The study was submitted to the Transportation Command in October. The researchers are seeking to get it published in a peer-reviewed journal.

“We look at this as one important leg of understanding the risk of flying,” Kinahan said.

The Rev. Dave Korth hopes people have fun with his hair tale and that it brings attention to front-line workers and teachers.

The man in his 60s died in a Lincoln hospital and had multiple underlying health conditions, according to a press release from Corrections Director Scott Frakes.

Lancaster County to mandate masks in all indoor places except homes

Editorial: It's time to double down on virus safety as we near holiday gatherings

"We have learned a lot since spring about how to be safe, but unless we actually do these things, we put ourselves and others at risk."

Burke High School is moving to fully remote learning and will do so through Nov. 20.

Midlands Voices: Mask mandate is appropriate, given the health threat to Nebraska

Despite the holidays right around the corner, things on the COVID-19 front are not looking up. The number of cases is rising. On Nov. 1, Nebra… 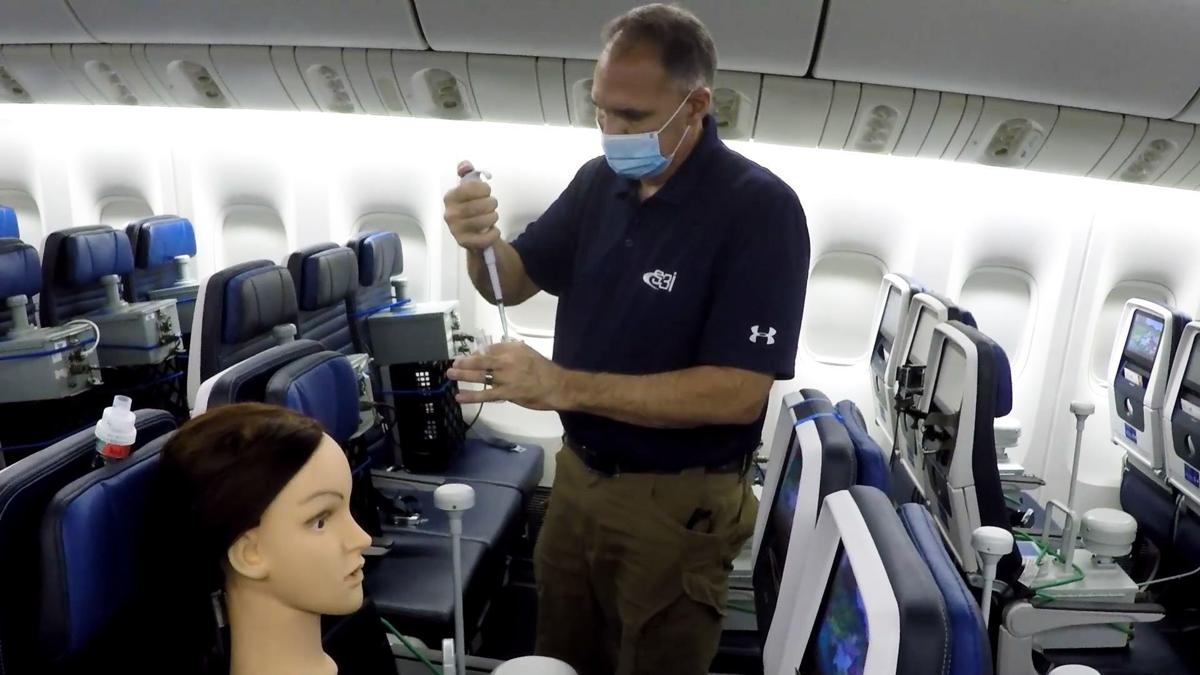 David Silcott, chief executive of S3i, a biological research company, on board a United Airlines jet at Dulles International Airport in August. The mannequin, Ruth, was set up to release an aerosol every two seconds to mimic the breathing of someone with COVID-19. Researchers set up 40 monitors throughout the cabin and found that the aerosol dissipated quickly and that less than 1% of the particles ended up in what would be the breathing space of another passenger. 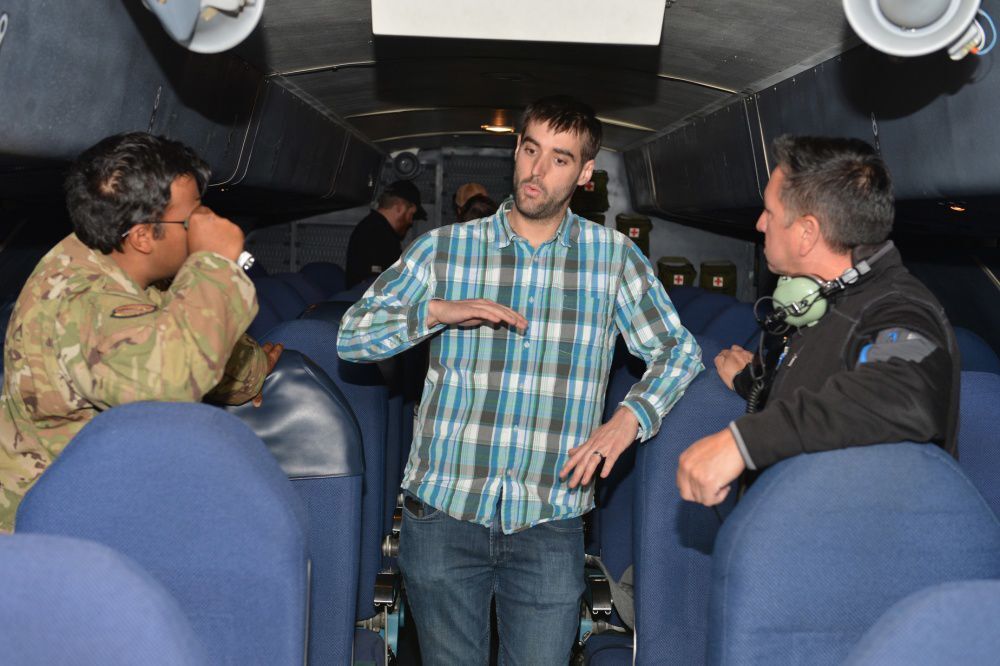 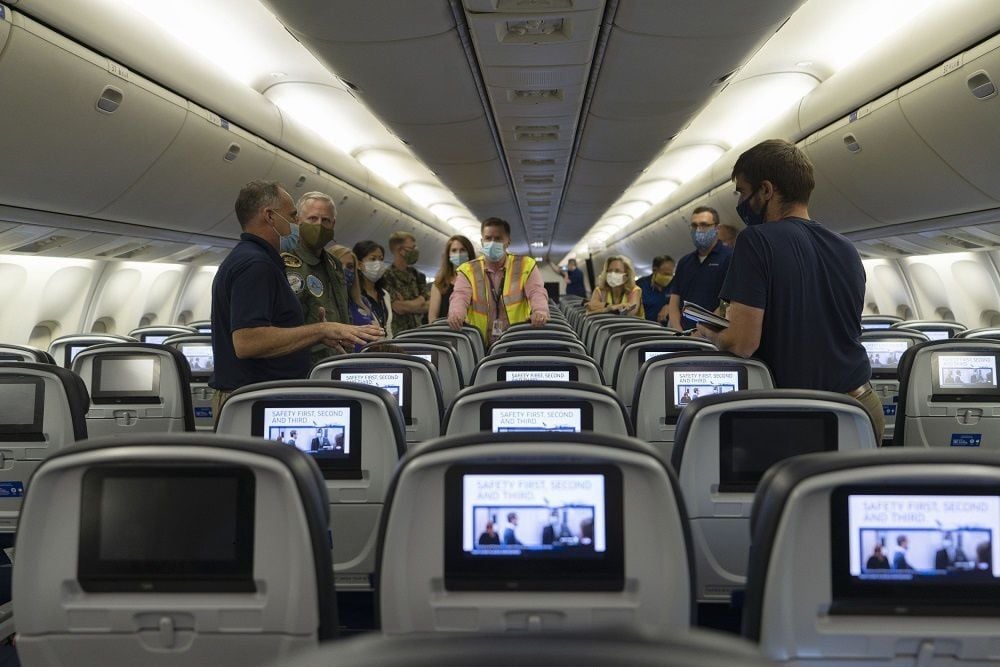 Scientists from the University of Nebraska’s National Strategic Research Institute and two private companies took part in the study, which has been hailed as “landmark” by United Airlines.