Wrestling with paid leave: New moms in Nebraska government rely on co-workers to donate time
1 comment
Share this
Only $5 for 5 months
1 of 2 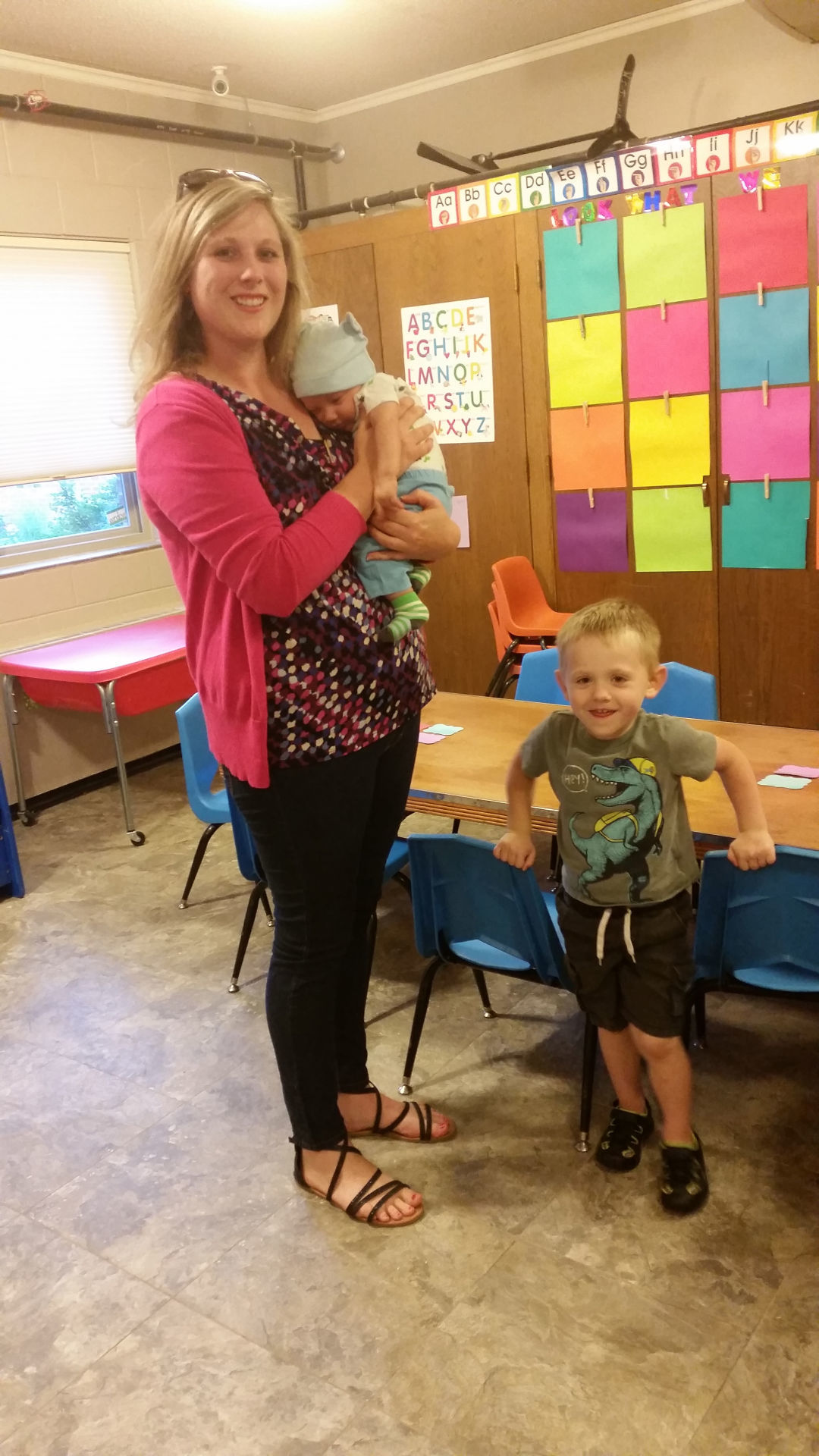 Jessie Sampson with sons Gram, 3, and baby Liam. Sampson, who works for the Nebraska Department of Health and Human Services, used a state maternity leave donation program launched in January to take more paid time off with Liam than she did with Gram.

When Jessie Sampson had her first son, Gram, now 3, she took about eight weeks off — mostly unpaid — from her job in state government to recover and bond with her new baby.

The second time around, things were different, thanks to a new program that allows state employees to donate vacation time to new and expecting moms within their agencies.

Sampson, who works for the Nebraska Department of Health and Human Services, took 12 weeks off — mostly paid — earlier this year after delivering Liam, now 5 months old.

The extra paid time, Sampson said, allowed her to keep Gram in day care — and hold his spot — while she bonded with new baby Liam.

“I think it works out pretty well,” said Sampson, noting that the state has a lot of long-term employees who often don’t use all of their vacation time. “It’s a use it or lose it; at least it’s doing some good.”

Leave donation programs are one of a number of solutions that have been developed or proposed in recent years as the nation continues to wrestle with providing paid parental leave.

The United States is the only industrialized nation that does not mandate paid maternity leave, according to the Organization for Economic Cooperation and Development.

There’s broad support for it. A 2017 study by the Pew Charitable Trust found that 82 percent of Americans supported paid leave for new moms and 69 percent backed it for dads.

Paid leave is seen as a good thing for a number of reasons. It helps businesses attract and retain quality employees, particularly when it comes to younger workers in the process of building families. Keeping people in the workforce — particularly women, who are most likely to drop out to care for young children and face pay gaps as a result — also helps bolster the economy. And brain science points to the importance of early bonding to children’s future well-being.

But it has also proved challenging, particularly for small businesses, largely because of its cost.

Right now, federal law protects for up to 12 weeks the jobs of men and women who take leave to care for a child, provided they work for a company with 50 or more employees. It doesn’t require that time off come with pay.

Some large companies in recent years have gotten attention for boosting their paid family leave benefits as the labor market has tightened. Locally, for example, FirstData in 2017 began offering eligible employees 12 weeks of paid leave for primary caregivers and two weeks for secondary caregivers in a policy designed to be gender neutral. Creighton University offers eligible employees who are new moms or dads four weeks of paid family leave.

Other companies instead have policies that consider a new mom disabled for a time after birth, typically six to eight weeks, qualifying her for short-term disability pay.

Governments, on the other hand, have to cover costs with tax dollars. That makes it harder for them to provide the benefit because they have to justify the expense to taxpayers.

The State of Nebraska currently doesn’t have paid family leave time. Nor does it have a temporary disability policy to cover time off with a newborn.

The donation program, Jackson said, was a step the state could take immediately with no budget impact to support expectant moms and to be more competitive with the private sector. The state already is obligated to cover the cost of the paid vacation time employees are donating.

A woman Jackson works with in the Governor’s Office inspired the program. Expecting her first child, she hadn’t accrued enough sick or vacation leave to cover the time she wanted to take after her baby was born.

So state officials broadened a catastrophic leave program that allows employees to donate sick or vacation time to a co-worker who is sick or injured. The expanded program allows new moms to tap donated vacation time. Gov. Pete Ricketts announced the change in January.

As of early September, 3,082 donated hours had been used and 41 moms had benefited from the donation program.

“Our workforce ... appreciates that we’re taking strong steps toward making them feel supported, allowing them to continue their careers in public service and accommodate their growing families without having their wages negatively impacted,” Jackson said.

But Tiffany Joekel, policy and research director for the Women’s Fund of Omaha, said strong family leave policies do better.

“You shouldn’t have to rely on the generosity of your co-workers to meet the needs of your family and protect your job,” she said. The Women’s Fund, a nonprofit, offers 12 weeks of paid leave for an employee’s own illness or to care for and bond with a new or adopted child.

Jackson, who previously worked in the tech industry, said the public sector will continue to draw upon the private sector for inspiration as government innovates in this area.

Paid leave programs, however, aren’t the norm in the private sector either: 15 percent of private sector workers were offered paid family leave last year, according to the U.S. Bureau of Labor Statistics. That was up from 13 percent in 2015.

They’re more common in state, or state-run, programs than in the private sector, he said. Smaller employers don’t have the resources to offer it and larger ones may worry about a negative perception if employees needed to rely on their colleagues’ donated time off.

A 2017 study by the Society for Human Resource Management found that 11 percent of companies allowed donations of vacation time and 7 percent had OK’d sick time donations.

A few states and cities instead have taken another tack. California, New Jersey, New York and Rhode Island all require companies that do business there to provide paid family leave. According to the National Conference of State Legislatures, the programs are administered through pre-existing temporary disability insurance programs and funded through employee payroll deductions.

Schembari said he expects the number of states and cities requiring employers to offer paid family leave to continue to increase, just as it has for paid sick leave.

For Sampson, the mother of two, the additional paid time off was welcome. Without the 150 hours of donated time she received, she’d have gone without pay for about four of the 12 weeks she was on leave. It also allowed her to keep back a few weeks of her vacation time in case her boys got sick. Her child care center is closed the week between Christmas and New Year’s Eve.

“Having that option was really helpful,” she said.

Are you satisfied with your company's parental leave policy?

The Omaha woman has stuck with her three-times-a-week CrossFit workouts during her third pregnancy.

At her heaviest in April 2016, Kerri Jones clocked in at 409 pounds. Two years later, Jones shed more than half of that weight.

Fischer's paid family leave program gets off the ground; a state senator has a plan, too

A number of proposals have been floated nationally in recent years to address continued interest in paid family leave for parents of new and adopted children.

Nebraska Medicine is one of two health centers nationwide to receive a $3 million federal grant to conduct a pilot project demonstrating how a regional response system could work — and help save lives — in a disaster large enough to overwhelm local hospitals.

Blair teen with Down syndrome, friend since 6th grade voted homecoming royalty; 'Everyone wanted him to win'

Homecoming queen Megan Sorensen said it was no surprise to see Alec Aman crowned king. Voting for him was the "talk around school" leading up to the Oct. 6 dance.

Minnesota woman saves husband in cardiac arrest. After he woke from coma, she gave birth to their son​

Her husband, Andrew Goette, went into cardiac arrest due to an abnormal heart rhythm, doctors said.

A shocking number of US women still die of childbirth. California is taking action

Here the maternal mortality rate has been climbing, putting the United States in the unenviable company of Afghanistan, Lesotho and Swaziland as countries with rising rates.

21 percent of babies are born by C-section, nearly double 2000 rate

Childbirth experts say C-sections would account for 10 to 15 percent of the babies delivered if they were done only because of complications.

We asked several experts on workplace technology, data, compensation and other issues to make predictions on the rest — their bets on the likely-but-not-obvious trends they believe will take hold, the challenges managers will face and the new perks employees could see.

The University of Nebraska would be allocated up to $250,000 to develop an "evidence-based, data-driven, strategic action plan" to address the impacts of climate change.

This gender reveal takes to the skies: Pilot helps Fort Calhoun couple with their big moment

About 30 friends and family of Chelsea and Chris Samson waited for Scott Olson’s Cessna 175 to release a stream of either pink or blue chalk and biodegradable confetti.

State Sen. Kate Bolz says her measure would give low-income families a boost toward self-sufficiency. The Nebraska Department of Health and Human Services opposed the change, saying it would cost "tens of millions of state dollars."

Sen. Deb Fischer, whose paid leave pilot program would provide tax credits to employers who offer paid family leave and was included in the GOP tax overhaul, described Ernst’s bill as “raiding” Social Security. Ernst countered that her proposal would be available to all Americans across the board.

It's the latest alarm sounded by researchers who have been both excited and unnerved by the powerful genetic engineering technique known as CRISPR.

Backers say providing such paid leave would help keep and attract workers at a time when workforce shortages plague many Nebraska businesses. Opponents say the measure is overly ambitious and unnecessary, and represents an extra burden on small businesses.

Under a defense spending bill Congress is poised to approve, more than 2 million Americans who work for the federal government will be guaranteed paid leave for the birth, adoption or foster care of a child for the first time ever, starting Oct. 1, 2020. 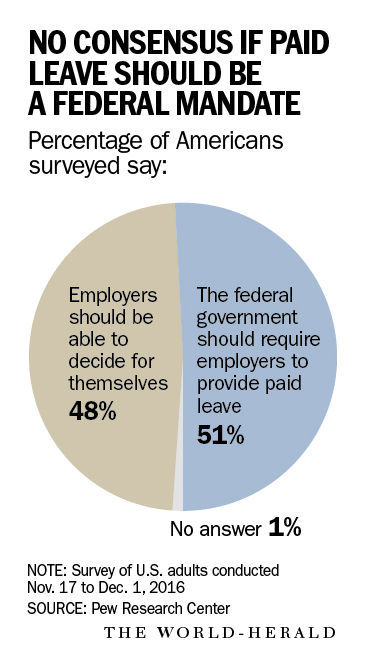 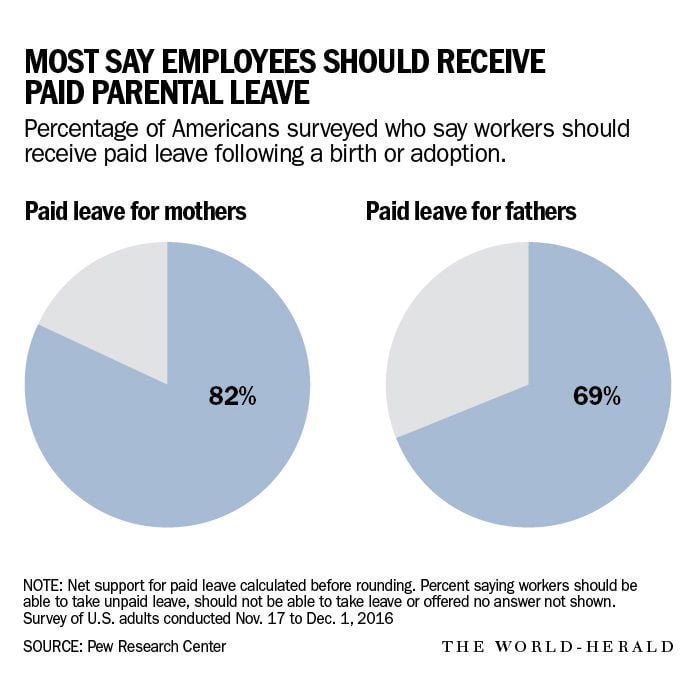 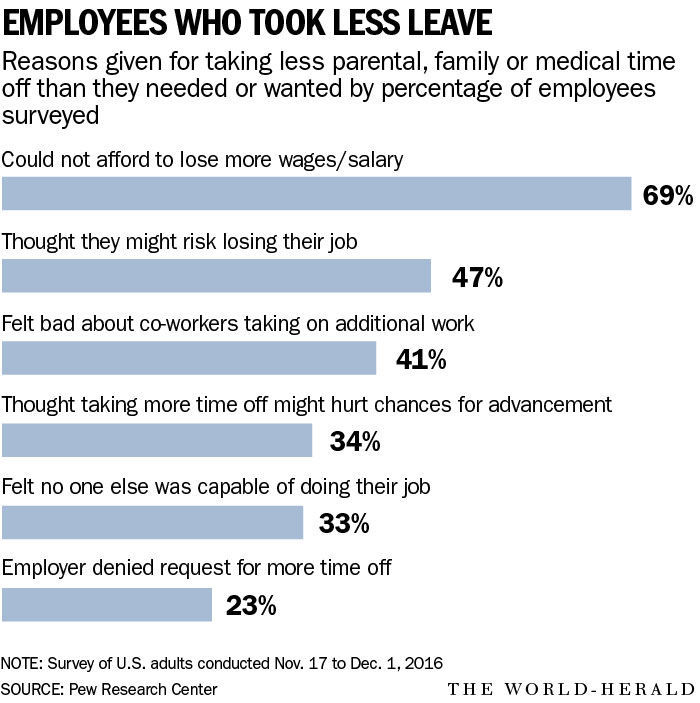 Jessie Sampson with sons Gram, 3, and baby Liam. Sampson, who works for the Nebraska Department of Health and Human Services, used a state maternity leave donation program launched in January to take more paid time off with Liam than she did with Gram.