Defense Secretary Mark Esper stopped by Offutt Air Force Base for his first tour of the new U.S. Strategic Command headquarters since it was completed in December.

He got a close-up look at what $1.3 billion can buy. And he liked what he saw.

“It’s great to see this new headquarters,” he told a gathering of more than 800 military and civilian workers in the atrium of the new Gen. Curtis E. LeMay Building. “I remember the old one. This one is quite (a bit) better.”

The trip to Offutt was part of a two-day swing through the Midwest that also included a visit Wednesday to Minot Air Force Base, where he visited a field of intercontinental ballistic missiles and viewed B-52 bombers capable of carrying nuclear weapons.

Esper, 55, served 21 years in the Army, National Guard and reserves after graduating in 1986 from the U.S. Military Academy. He is a veteran of the 1991 Persian Gulf War.

He later worked as a congressional staffer, including a stint with then-Sen. Chuck Hagel, R-Neb., and later as a lobbyist. He was named Secretary of the Army by President Donald Trump in 2017, and became Secretary of Defense two years later.

At Offutt on Thursday he met with Adm. Charles Richard, StratCom’s commander, and toured the new LeMay Building with him.

The building was dedicated in November, seven years after ground was broken and more than two years behind schedule. The project was plagued with difficulties: drainage problems that forced a redesign, mold growing in the ductwork, floods, a fire, even a tornado. When initial bids came in over budget, designers had to scale back the size of the building.

After the tour, he ate lunch with Offutt airmen before taking questions from the workers during a town hall meeting.

Esper also received a tour of the base, including the southern portion that was devastated by flooding in March 2019. The floods destroyed 137 structures, including 44 buildings with more than 1.2 million square feet of office space. More than 3,000 Offutt employees were displaced by the floods. Damage totaled at least $790 million and could reach $1 billion.

In his public comments, Esper talked up the need to modernize the nation’s nuclear triad, including nuclear submarines, long-range strategic bombers and land-based missiles. StratCom’s duties include maintaining the nuclear arsenal and preparing nuclear war plans.

“Russia and China are both modernizing and expanding their nuclear arsenals,” Esper told reporters at Minot. “We need to have the confidence that our triad and related systems are effective.”

The Congressional Budget Office has estimated the first 10 years of the modernization plan will cost nearly $500 billion, and that over a 30-year span the total would hit $1.2 trillion, including the cost of sustaining the current and future force.

The key new weapons are a replacement for the current Minuteman 3 ICBM, a new-generation Columbia-class ballistic missile submarine fleet, and a new long-range bomber, dubbed the B-21 Raider, to replace the B-2 stealth bomber that is to be retired even as the older B-52 bomber remains. The B-52, which entered service in the 1960s, is getting new engines and other major upgrades.

Last week, the Trump administration unveiled a proposed 2021 budget that included nearly $46 billion for nuclear weapons, divided between the Defense Department, which is responsible for operating the weapons, and the Energy Department, which maintains the warhead stockpile.

Under current planning, the Pentagon alone would spend a combined $85 billion in the coming five years for the new bomber, the new ICBM, the Columbia-class submarine and modernization of the communications and warning systems that support the whole system of nuclear command and control.

“I think we’re on the right path,” Esper said. “This administration is investing billions of dollars in all three legs.”

At the same time, Esper told the gathering of Offutt employees, the Defense Department must prioritize its spending with an emphasis on meeting the challenge of “great power conflict” with Russia and China.

“We are in an era of fiscal constraint,” he said. “It’s important that we’re making the best use of our people and money.”

Offutt Air Force Base is named for Lt. Jarvis Offutt — the first airman from Omaha killed in World War I.

Navy Adm. Charles Richard, the head of U.S. Strategic Command, testified Thursday on President Donald Trump’s proposed military budget and shot down suggestions that it represents the start of an arms race. “No nation has done more than the United States to reduce the reliance on nuclear weapons," he told the Senate Armed Services Committee. "No nation has divested more nuclear weapons than the United States has.”

Vice Adm. Charles Richard, a 27-year member of the Navy’s submarine force, served as StratCom’s deputy commander from 2016 to 2018. He will take the helm from Gen. John Hyten.

U.S. Strategic Command is taking action to make sure its nuclear arsenal is ready if needed as part of global pandemic plan, say leaders of the Offutt-based command.

A 22-year Navy veteran who once served at StratCom is accused of sending an email containing classified information to a Russian national.

The world has never been as dangerous," said former Secretary of Defense Chuck Hagel, a Nebraskan. 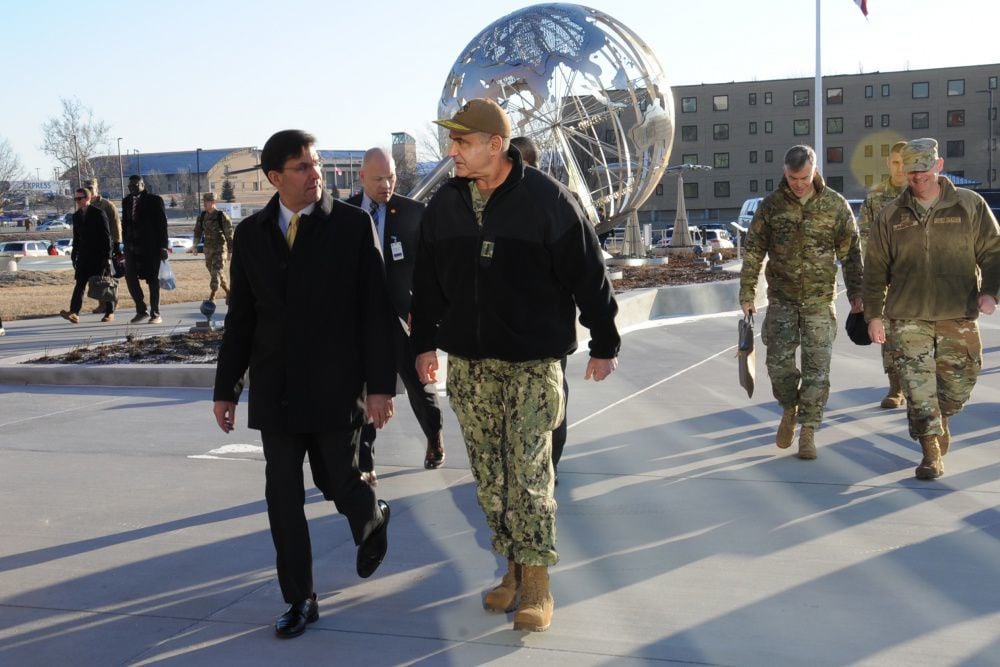 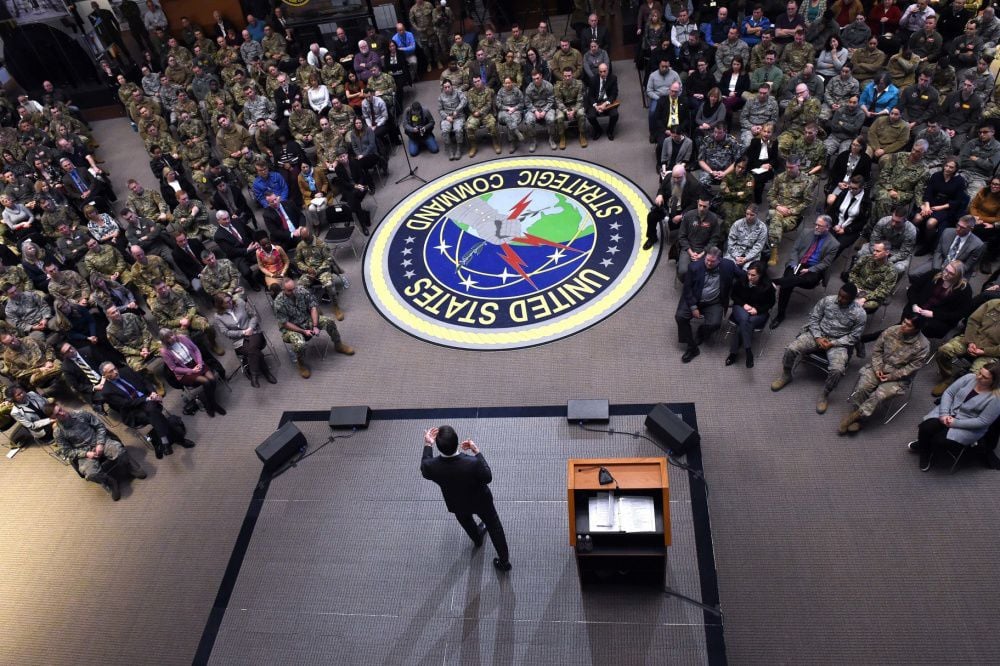 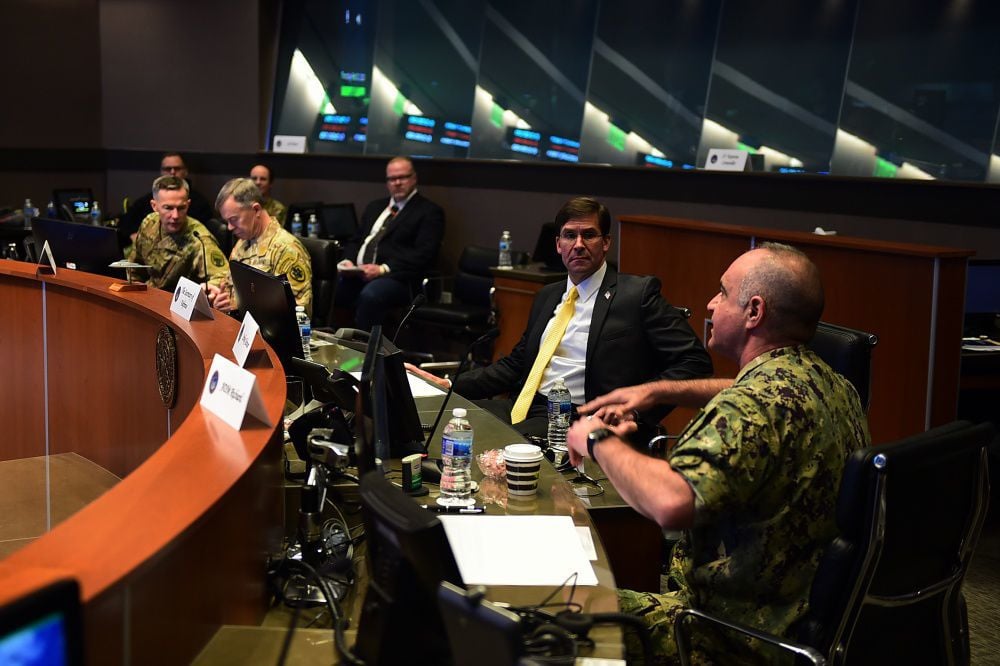