Just in time to cope with increased tensions with North Korea and Iran, U.S. Strategic Command is warily watching the world from a new bunker.

Last month, with zero fanfare, StratCom moved its battle-watch staff from the old hilltop headquarters building at Offutt Air Force Base — where teams have operated continuously since 1957 — into the brand-new $1.3 billion command-and-control facility about 500 yards away.

“It’s all come to life,” said Vice Adm. David Kriete, StratCom’s deputy commander, who supervised the move. “The first evening, we had one of our nuclear command-and-control exercises. We’ve been off and running ever since.”

The move, on Dec. 17, occurred two weeks after North Korean leaders lobbed the veiled threat of a “Christmas present,” which was widely expected to take the form of a missile test. That test hasn’t occurred (yet), but now the U.S. may be on the brink of war with Iran after killing the country’s top military leader in Baghdad.

As of Friday, about 90% of StratCom’s 3,300 personnel at Offutt had completed the move into the new building, said Karen Singer, a StratCom spokeswoman.

The global operations center, or “battle deck,” is slightly more than 1,000 square feet, the beating heart of a building that measures 916,000 square feet.

It features several semicircular rows of computer workstations facing a video screen 9 feet high and 32 feet wide. The back row can be set off by a soundproof divider, in case information is discussed that is too sensitive for even some of the commander’s closest aides to hear.

From their offices upstairs, Kriete and StratCom commander Adm. Charles Richard can reach the battle deck in 90 seconds on foot, or 30 seconds on a private elevator.

In the vacated 1957 headquarters building, the journey took five minutes.

The old headquarters was also outmoded, having never been designed for the thousands of computer workstations and high-tech communications gear needed in the command center for the nation’s nuclear arsenal.

Kriete described the transition to the new operations center as “seamless.” But it took months of work and practice before that seamless change could happen.

Because some of the monitoring equipment was new, everyone on the battle-watch teams had to be trained and recertified, Kriete said, both individually and in groups. That involved “a couple hundred” people, he said.

For weeks, teams operated in both buildings while the personnel, both military and civilian, got used to the new equipment and computer displays.

“It was kind of a parallel operations sort of thing,” Kriete said. “We didn’t skip a beat.”

Gen. John Hyten heralded the change Nov. 18, when he handed over command of StratCom to Richard. They also christened the new building in honor of Gen. Curtis LeMay, longtime commander of the Strategic Air Command. Hyten described the first full-scale test of the new operations center, which took place that day.

“If everything goes according to schedule, we could all be in by Christmas,” he told The World-Herald at the time.

StratCom beat that deadline by a full week.

“It was the culmination of years of work, by thousands of folks,” Kriete said.

It was one of the few times in the new building’s complicated history that things have gone according to schedule.

Congress approved funds to design the building in 2009, and construction began in 2012. By then, the project was already six months behind schedule after initial bids on the building came in too high. The building size was shrunk by about 10% to reduce the cost.

The contractor, Kiewit Phelps, ran into a series of problems, including drainage problems, mold in new ductwork, labor shortages, fires, floods and even a tornado. The project ended up $53 million over budget and 29 months behind schedule, taking 86 months to complete.

Kriete acknowledged the problems, but he said the overruns will be forgotten as the building ages.

“I know it cost $1.3 billion,” he said. “But this is the place where we’re going to be carrying out nuclear command and control for as far as we can see into the future.”

StratCom has undergone several changes under Gen. John Hyten. He has described StratCom's new $1.3 billion headquarters as a "weapons system, not a building." And his biggest push has been to keep funding on track for a massive modernization of U.S. nuclear weapons and the systems that deliver them.

A newly released Department of Defense inspector general’s report chronicled a litany of problems on the $1.3 billion project, which was begun in 2012 and is now more than two years behind schedule.

Congress ordered the investigation after the cost of constructing the building jumped nearly 10 percent, and the project fell at least 20 months behind schedule. Problems included mold, design flaws and the fact that the building was redesigned after construction began.

The leaders of the U.S. Strategic Command secured the Air Force's permission to carry the name of Gen. Curtis E. LeMay from the longtime StratCom headquarters to the sleek new headquarters building right across the street.

StratCom 'front and center' in discussions of space force

Seedorff Masonry, of Strawberry Point, Iowa, sued Archer Western Construction, of Chicago, and its insurer in 2018, saying it hadn't been paid nearly $610,000 for labor and limestone it supplied for the Omaha National Cemetery that opened in 2016.

Editorial: StratCom shows impressive professionalism in carrying out its range of duties

Construction of the new, 914,000-square-foot headquarters for the U.S. Strategic Command was a complicated, protracted project, but the $1.3 b…

Nebraska newpaper publisher Carroll Stewart told the story of his fellow airmen in "Ploesti: The Great Ground-Air Battle of 1 August 1943." Twenty-nine airmen from Nebraska and seven from western Iowa flew in the raid.

'We thought we were invincible': Midlands copter pilots forged bond in nearly forgotten battle in Laos

Despite its importance, Lam Son 719 is almost forgotten now — even by many Vietnam veterans. Yet to the small community of Army helicopter crews, it is their own Iwo Jima. They flew long hours, almost every day, against the fiercest anti-aircraft fire of the war.

Five Vietnam War photojournalists died when their helicopter was shot down in 1971. Nearly 30 years later, fragments of their remains were recovered, eventually ending up at Offutt Air Force Base, where they will stay until a permanent burial site can be found.

During a visit to Strategic Command, Defense Secretary Mark Esper says a multibillion dollar rebuild of the U.S. nuclear arsenal is the Pentagon's No. 1 priority.

A 22-year Navy veteran who once served at StratCom is accused of sending an email containing classified information to a Russian national.

Local boosters say Offutt Air Force Base has "a solid chance" to host the new U.S. Space Command. But the five other finalists will be tough to beat. 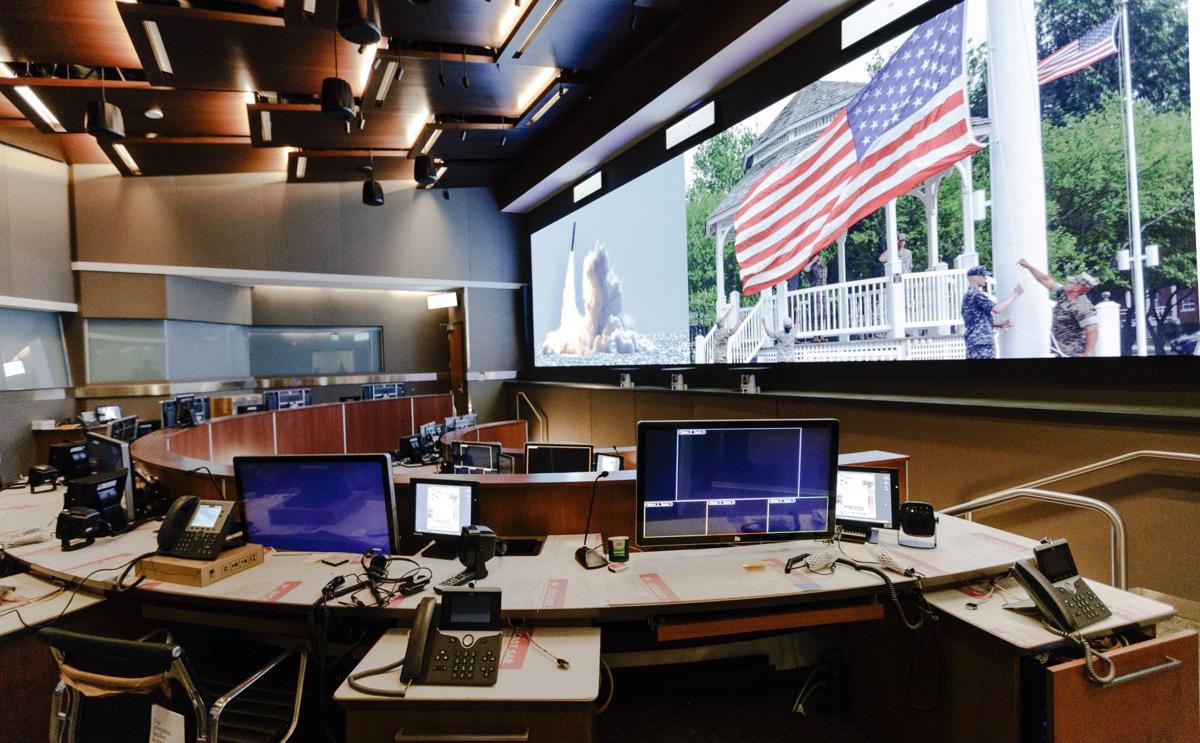 This is the CSR Battle Deck at U.S. Strategic Command's new Command and Control Facility at Offutt Air Force Base. 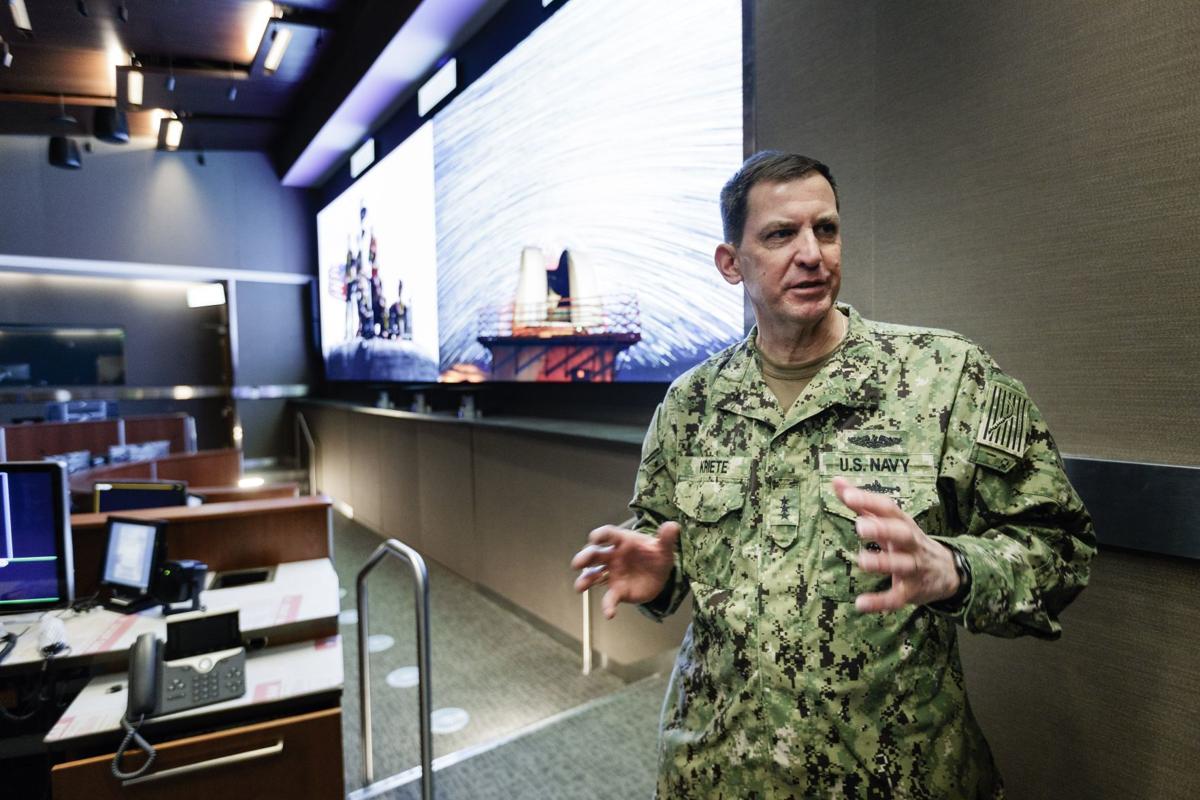 "The first evening, we had one of our nuclear command-and-control exercises. We've been off and running ever since," said Vice Adm. David Kriete, StratCom's deputy commander, who supervised the move.