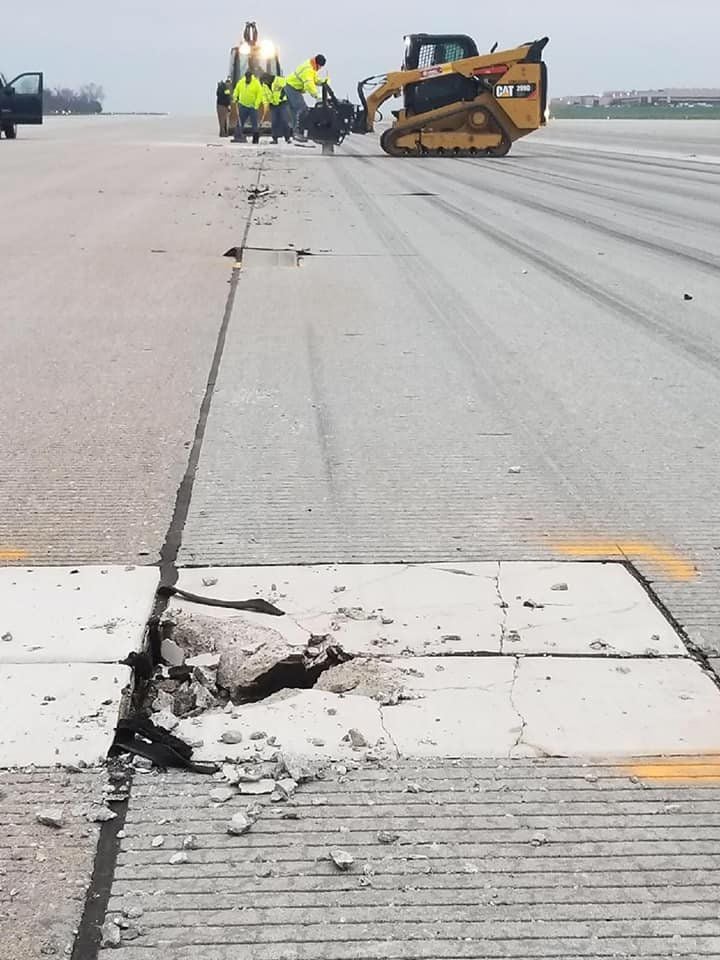 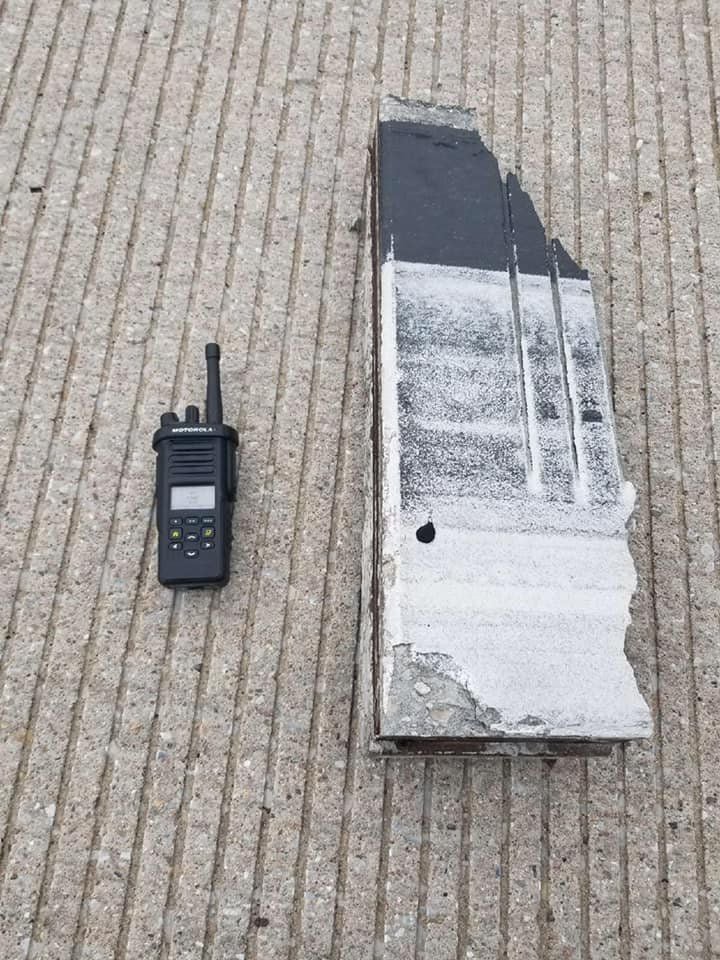 Multiple lightning strikes tore chunks out of the 2-mile-long runway at Offutt Air Force Base during a storm that hit late Wednesday night. 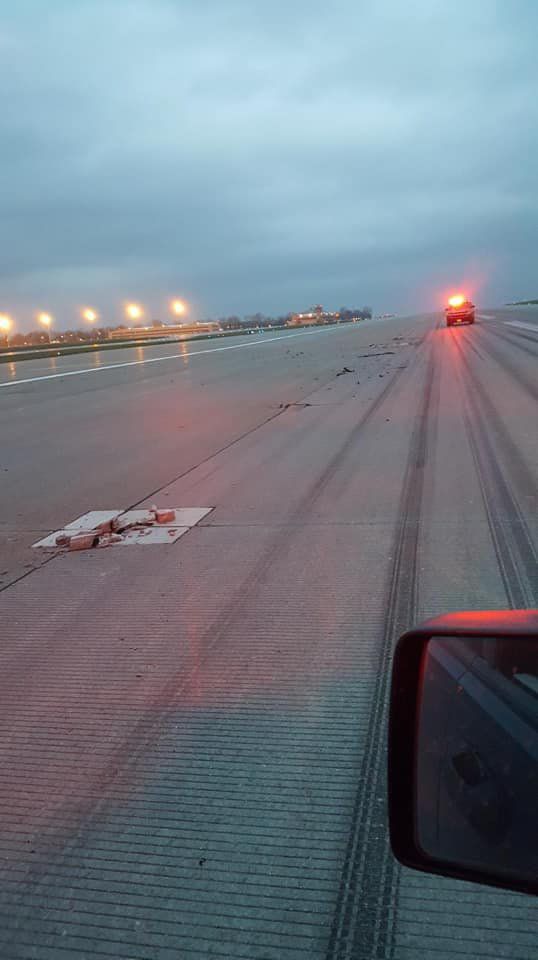 Multiple lightning strikes tore chunks out of the 2-mile-long runway at Offutt Air Force Base during a Wednesday night storm. 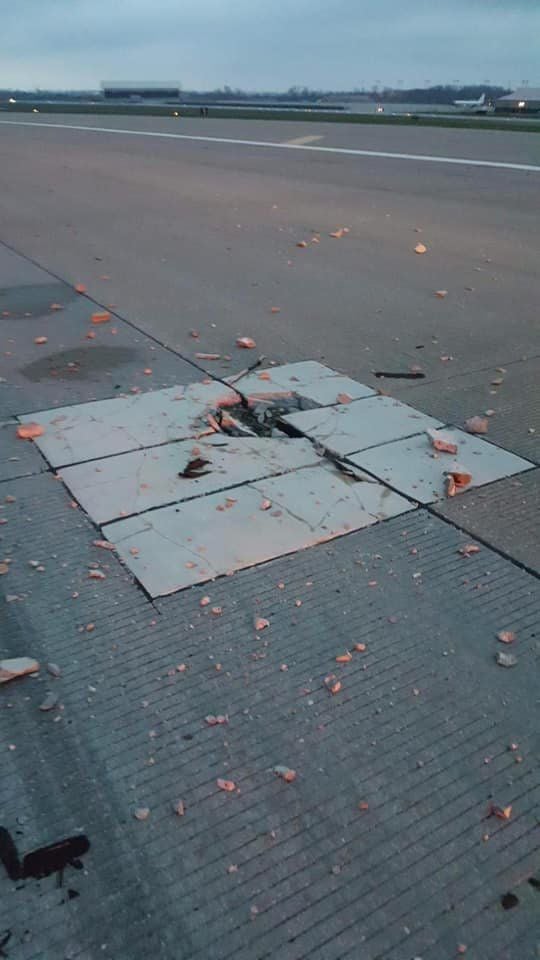 Multiple lightning strikes tore chunks out of the 2-mile-long runway at Offutt Air Force Base during Wednesday night’s storm.

Powerful lightning bolts danced up and down Offutt Air Force Base’s 2-mile-long runway during Wednesday night’s thunderstorms, adding to the weather-related woes recently inflicted upon the base.

Lightning struck the runway in at least 10 places, according to a Facebook post by 55th Wing Commander Col. Michael Manion. The strikes prompted emergency repairs by the Wing’s civil engineering squadron. A spokesman said the repairs were completed by noon, and the airfield was reopened.

Manion’s Facebook post said the lightning tore holes 3 to 5 inches deep in the concrete surface. One photo showed a broken chunk that appeared to be at least 2 feet long and 8 inches wide.

It dwarfed a hand-held radio that had been placed next to it for the photo.

The airfield wasn’t operating at the time. Some of the 55th Wing’s reconnaissance aircraft had been flown to other bases ahead of the storm, and others had been pulled into hangars.

“Big storm last night brought big lightning,” Manion said in the post. “We will put it back together and you will see/hear airpower again later today.”

55th Wing officials couldn’t confirm exactly when the lightning hit. But Katie Gross, a meteorologist at the National Weather Service office in Valley, said the peak of the storm passed over Offutt shortly before 11 p.m.

Flooding of base forces cancellation of Offutt air show in June

These are the first severe thunderstorms to hit the area this spring, part of a strong low pressure system that caused blizzard conditions Wednesday and Thursday in western and central Nebraska.

Gross said lightning seeks the shortest path to the ground, which often is through trees or structures. But in an open space like an airfield, bolts may hit the ground.

“Obviously, it was a powerful strike,” Gross said. “It’s going to leave a mark.”

Offutt is still recovering from last month’s flood, which submerged about one-third of the base under waters from the nearby Missouri and Platte Rivers. Forty-four buildings sustained damage, and about a quarter of the runway was underwater.

In 2017, an EF-1 tornado struck Offutt’s flightline, causing about $20 million worth of damage to buildings and aircraft.

The 55th Wing also is planning to rebuild the runway beginning in December, at a cost of $130 million. It is the most extensive reconstruction since the runway was built in 1941 and extended to its current length in the mid-1950s.

Photos: Signs of 2019 flood damage at Offutt Air Force Base

Lights back on in a few of Offutt's flooded buildings, but full damage tally still weeks away

Damage assessment is expected to take 90 days. Only then will engineers know which buildings can be saved, and which must be torn down.

In a joint press release, the entire Nebraska congressional delegation touted provisions of the Disaster Tax Relief Act of 2019:

Is springtime finally here to stay in Nebraska? Signs point to yes

“We can still get snow, but it looks like we’ve finally made the turn,” said Aaron Mangels, a meteorologist at the National Weather Service in Hastings.

Look, up in the sky! A Russian 'spy' plane flies over the Omaha area on Friday

A New Open Skies photo observation plane might be visible over Offutt Air Force Base at about 12:30 p.m. on Friday.

Some buildings will be torn down and rebuilt on higher ground north and west of the Offutt runway. Those being rebuilt in the area that flooded will be built to withstand high water.

Here's the science behind the severe weather expected this weekend

The weather forecast for the weekend is typical of spring in Nebraska and Iowa. In other words, it's not unusually ominous. But powerful super cell storms are expected, and it just takes one of those to strike a city for significant damage to occur from hail, straight-line winds or even a tornado.

State Sen. Sue Crawford of Bellevue, who now holds the seat, has endorsed Susan Hester as her replacement. Crawford is term-limited and unable to seek reelection.

The project had been scheduled to begin in December but is now being pushed back to October 2020, with completion one year later. And the cost of the project, estimated at $130 million when it was announced in January, has now jumped to $176 million, said Col. Alan Dayton, who heads Offutt’s 55th Mission Support Group.

Offutt projects spared in shift of funds to border wall, but 55th Wing could feel impact

Of the $3.6 billion in military construction funds the Trump administration is shifting to the border, about $180 million is for work at three overseas bases where the Offutt-based 55th Wing deploys RC-135 reconnaissance jets on a nearly continuous basis or plans to in the future.

The Trump administration is believed to be preparing to pull out of the 34-nation Open Skies Treaty, a plan that would idle two Offutt-based OC-135B reconnaissance jets and their crews.

The building and design firm Gilbane Federal of Concord, California, won the contract. The company built the National World War II Memorial and the Vietnam Veterans Memorial in Washington, D.C.

From 1954-65, the hangar at what was then the Lincoln Air Force Base housed planes that stood on alert to carry nuclear bombs in case of war with the Soviet Union.

Multiple lightning strikes tore chunks out of the 2-mile-long runway at Offutt Air Force Base during a storm that hit late Wednesday night.

Multiple lightning strikes tore chunks out of the 2-mile-long runway at Offutt Air Force Base during a Wednesday night storm.

Multiple lightning strikes tore chunks out of the 2-mile-long runway at Offutt Air Force Base during Wednesday night’s storm.