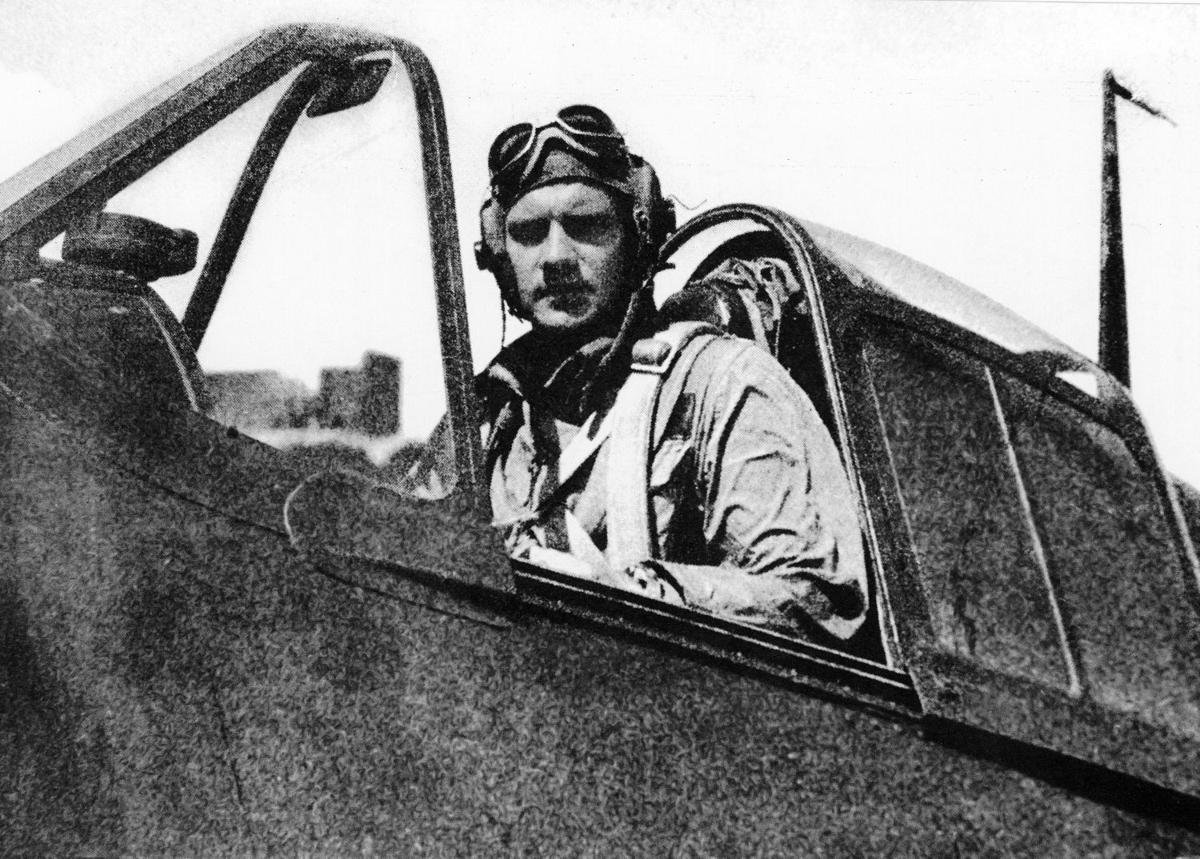 Donald McPherson during his military service. He flew his first combat mission in March 1945. 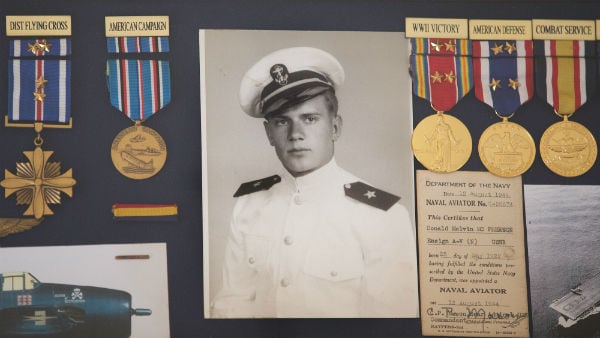 A photo of Donald McPherson as a cadet in 1944 along with his medals. McPherson, 93, was named to the Nebraska Aviation Hall of Fame in January, and he will travel to Washington in May to receive a medal from Congress alongside other living fighter aces. 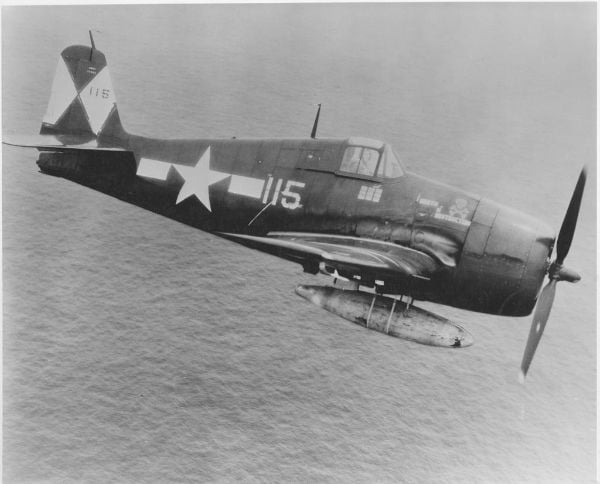 McPherson flew this F6F Hellcat fighter, the “Death ‘n Destruction,” which became famous for its skull-and-crossbones nose art and nine kills achieved by pilots while flying it.

Ensign Donald McPherson shot down three Japanese suicide aircraft as they menaced some American destroyers near Okinawa on May 4, 1945, in the midst of the fiercest kamikaze assault of World War II.

The three “kills,” added to two others the previous month, made the 23-year-old Nebraska farm boy a certified fighter ace, one of an elite corps of pilots to shoot down five foes in battle. He’d flown his first combat mission only six weeks earlier.

To McPherson, it didn’t seem like such a big deal. There were close to 60 aces aboard his ship, the aircraft carrier USS Essex, and 11 in his squadron, VF-83. Two of the other three Hellcat pilots in his division, called “Wonder 5,” also earned the distinction.

“It was kind of commonplace,” said McPherson, 93, during an interview last week at his home in Adams, Nebraska. “I was just in the right place.”

Seventy years later, he is part of a club that is rapidly disappearing. Of 1,450 American aces from the wars of the 20th century, only 79 are still living.

No new fighter aces have been minted since Vietnam, thanks to the United States’ crushing air superiority in the post-Cold War era.

“Short of another global catastrophe, we’re not going to have any more aces,” said JD Wyneken, administrative director of the American Fighter Aces Association.

Like McPherson, most of the living aces earned their status during World War II, and the largest number now are in their 90s. McPherson and Lester Arasmith, a retired Air Force colonel from Lincoln, are the only two left from Nebraska.

“They are the voice, the symbol of the people who have served our country with honor and distinction,” said Del Calzo, 78, a portrait photographer who lives in suburban Denver.

The book will feature one-page profiles of McPherson and the other surviving flying aces, each opposite a current black-and-white portrait of the pilot. It is expected to be published sometime next year.

“It’s to honor people who made sacrifices,” Del Calzo said.

Those are men like McPherson, whose life is by his own admission unexceptional, aside from his thrilling wartime achievements.

McPherson was the youngest of seven children in a farm family hit hard by the Great Depression. He graduated from high school in 1939 at age 16 and dreamed of attending the University of Nebraska, 30 miles away in Lincoln. He stuck around the farm, though, because he couldn’t afford tuition.

McPherson had no childhood dream of flying. But, when he was 19, his father urged him to enlist in the Navy so he could fly instead of getting drafted into the infantry.

He completed an 18-month flight program in the summer of 1944, trained to fly F6F Hellcat fighters. He married his high-school sweetheart, Thelma, and they traveled to San Diego before he left for duty in the Pacific.

McPherson spent some time in a replacement squadron before his assignment to VF-83 aboard the Essex the following spring.

He flew his first combat mission March 19, 1945, against an airfield on the Japanese mainland. He fired his rockets and destroyed a Japanese Betty bomber on the ground during a strafing run — but his engine quit as he pulled out of his dive at low altitude.

McPherson got the engine restarted even as he flew through enemy anti-aircraft fire. He wrestled his balky Hellcat back to the Essex, only to find out that a 20 mm cannon shell had penetrated the fuselage just behind his back and cut a cable leading to the controls in the aircraft’s tail.

“I came home that day with some holes in my airplane,” McPherson recalled. “(The mechanic) said, ‘It looks like you picked up a little lead today.’ ”

At first, they rarely faced enemy aviators. But during the two-month fight for Okinawa that began April 1, 1945, Japan sent waves of kamikazes against the American fleet.

He scored his first two kills just a few days into the battle during an aerial assault on Kikaijima, an island between Okinawa and mainland Japan.

“All of a sudden, I saw these Japanese dive bombers down low, coming towards us,” McPherson said.

He got on the tail of one and opened fire, scoring a hit on the aircraft. The pilot parachuted to safety.

McPherson outmaneuvered another and got behind him.

“I pulled the trigger, and he exploded,” McPherson recalled.

He’ll never forget May 4, 1945, the day the Japanese sent an estimated 250 kamikazes against the American invaders.

“They said, ‘Guys, split up and get all of ‘em you can,’ ” McPherson recalled. The kamikazes “were so low, you can’t hardly make a diving run on them.”

His section leader, Lt. j.g. Lyttleton Ward, shot down four that day, McPherson got three, and his friend Ensign Melton Truax shot down six — making him what pilots called “an ace in a day.”

“I was told we shot down a hundred planes in an hour’s time,” McPherson said. “But we didn’t get them all.”

Four Navy ships were sunk in the attack, and many others were damaged.

Decades later, McPherson would get a call from a former crewman aboard the USS Ingraham, a destroyer that had been hit by a kamikaze that day and narrowly missed by several others. The crewman had studied photographs and identified McPherson as the pilot who had shot down a Japanese aircraft just before it would have slammed into the ship.

“He said if they’d taken another hit, it would have sunk them,” McPherson said. “He wanted to thank us for saving their ship.”

The crewman later sent him a photograph of the Ingraham, signed by 35 surviving crew members.

In the waning days of the war, McPherson would get a distant aerial view of the mushroom cloud that resulted from the atomic bombing of Hiroshima. He would drop supplies to American POWs at isolated camps in liberated Japan. And he would fly over the USS Missouri on the day Gen. Douglas MacArthur accepted the Japanese surrender.

Within a few months, McPherson was back home to Thelma and his family’s farm. They raised four children, and he coached youth sports and was a Scout leader. For 30 years, he was a rural letter carrier as well.

Like many veterans of the era, McPherson initially said little about his war experiences. Later, though, he accepted invitations to speak at local schools.

“I found out, if I talked about it, it released things,” he said. “I don’t go into the gory part of the war, but I tell them war is not fun.”

McPherson worked his own fields until two years ago and still manages his farm. He’s been widowed for 14 years.

McPherson’s blue and white aircraft, called the “Death ‘n Destruction,” became one of the most famous Hellcats of the war because of its distinctive skull-and-crossbones nose art and the nine kills achieved by Wonder 5 pilots while flying it. In later years, the Revell model company sold a replica to model builders.

McPherson joined the American Fighters Aces Association more than 50 years ago and has told his story at AFAA events. He is a little embarrassed about a flurry of recent attention: He was named to the Nebraska Aviation Hall of Fame in January, and he’ll be recognized along with other living fighter aces in Washington this May. They will receive the Congressional Gold Medal, a prestigious award given only by an act of Congress.

McPherson’s dining room features military memorabilia, including a display case with his Navy medals, photos and models of his Hellcat, and of the aircraft types that he shot down during the war.

Someday soon, he is hoping to add the “Wings of Valor” book to his display.

“We appreciate,” he said, “that we aren’t a forgotten breed.”

Now Del Calzo has started a fundraising campaign on the Internet site Kickstarter to cover the substantial upfront costs of his new project, “Wings of Valor.”

The book will feature portraits and short profiles of surviving fighter aces from World War II, Korea and Vietnam. They live in 25 states.

Instead of shooting all the portraits himself, Del Calzo has hired local photographers, to save time. Most of the aces are in their 90s. Eighty have died since he started the project in 2012.

“It has been an absolute race against time,” he said. “They’re leaving us so fast.”

“I’m optimistic that when people learn about these men and their incredible stories, there’ll be a lot of interest,” Del Calzo said.

Once the book is published, royalties will benefit the Seattle-based American Fighter Aces Association. Administrative Director JD Wyneken, a former Nebraskan, hopes to revive the organization and tell the story of aces to another generation.

“These individuals had an outsized effect on the wars of the 20th century,” Wyneken said. “This generation is literally disappearing. This book is a way of capturing them near the end of their run.”

To support the project

Creative Creations customers are out hundreds of thousands of dollars, and the company's attorney, Steve Lefler, blames “an inadequate business model.”

In the NerdWallet metric, Omaha’s score of 76.59 was 2.72 points higher than that of second-place Kansas City, Missouri.

WASHINGTON — Donald McPherson remembers his first night aboard the USS Essex as a young fighter pilot in the Pacific theater during World War II.

Donald McPherson during his military service. He flew his first combat mission in March 1945.

A photo of Donald McPherson as a cadet in 1944 along with his medals. McPherson, 93, was named to the Nebraska Aviation Hall of Fame in January, and he will travel to Washington in May to receive a medal from Congress alongside other living fighter aces.

McPherson flew this F6F Hellcat fighter, the “Death ‘n Destruction,” which became famous for its skull-and-crossbones nose art and nine kills achieved by pilots while flying it.