The day is coming when Offutt Air Force Base’s giant “Doomsday” planes will fly off into the sunset.

The Air Force has started a program to replace the four E-4B Nightwatch jets — also known as the National Airborne Operations Center — within 10 years. The Doomsday moniker is because their primary mission is to take off and maintain control of nuclear weapons in the event of nuclear war. They also frequently are used as a transport plane for the secretary of defense.

In December, the Air Force posted a notice about the proposed replacement aircraft, which will be called the Survivable Airborne Operations Center, or SAOC. An “industry day” informational session for potential contractors was held in February.

Congress budgeted $20 million in 2019 and 2020 to begin looking for a replacement for the E-4B and two other types of military aircraft, the E-6B Mercury and the C-32A. The Trump administration is seeking $76.4 million in its 2021 budget, and is looking to spend more than half a billion dollars over the next five years developing the new plane.

The new planes would start joining the fleet in the late 2020s.

The big, white E-4s have been a familiar sight in Nebraska skies since they were introduced at Offutt in the mid-1970s. They are a military version of the civilian Boeing 747-200, which first flew in 1968. Production ended in 1991, and the last passenger airline retired the model in 2017 (though later versions are still in use).

“They’re the oldest 747s in the fleet,” said Rep. Don Bacon, R-Neb., who oversaw their operation when he commanded the Offutt-based 55th Wing in 2011-12. “Logistically, it’s a real challenge to find spare parts and maintain them.”

They’re also the Air Force’s most expensive planes to operate. The magazine Business Insider calculated in 2016 that the E-4Bs cost just less than $160,000 an hour to fly. That’s almost $30,000 an hour more than the next-highest, the B-2 Spirit stealth bomber, which is equipped to carry StratCom’s nuclear gravity bombs into battle.

In 2017, two E-4Bs were damaged when a tornado struck the Offutt flight line. Both were stored in a hangar at the time, but with their tails exposed. The tails, which stand six stories high, acted like giant sails and moved the planes inside the building. The planes sustained a combined $8.3 million worth of damage and were out of service, one for four weeks and the other for eight.

The Navy E-6Bs, although based in Oklahoma City, are also frequently on call at Offutt. Their primary job is to communicate with Trident ballistic-missile submarines through VLF (very low frequency) communications systems, which involve flying in tight circles above the ocean while trailing a 5-mile-long antenna.

The six C-32As are Boeing 757-200 narrow-body jetliners configured for use as executive transports for the vice president, first lady and members of the Cabinet. They were built in the late 1990s and are based at Andrews Air Force Base, Maryland.

When they are carrying the vice president, they are called “Air Force Two.”

Despite their age, the E-4Bs are newer and have a better service record than the C-135-variant reconnaissance jets flown by the Offutt-based 55th Wing on critical missions around the world.

Those planes were built in the early 1960s. A 2018 World-Herald investigation showed the C-135-variants had break rates far higher than the E-4Bs.

Only a handful of those aircraft are scheduled to be replaced before the 2040s.

The E-4B crew declared the emergency "out of an abundance of caution" after instruments indicated problems with the aircraft's hydraulic system, said Ryan Hansen, a spokesman for the Offutt-based 55th Wing.

“We never dropped the mission,” said Lt. Col. Douglas Dodge, the squadron’s commander. “We were always prepared and ready to do whatever was required.”

The 17-second video offers an unusual glimpse at one of the 55th Wing’s Rivet Joint jets doing its work. The gray-and-white jets with the distinctive “jowls” are a familiar sight over the skies of Douglas and Sarpy Counties, but it’s extremely rare to see one flying at altitude on a mission.

Airfield reopens for planes at Offutt; flooding did no long-term damage to runway, taxiways

Several planes returned to Offutt Thursday, but the 55th Wing declined to say how many.

Python 73’s crew contacted other aircraft crews and found they were able to fly. They informed the operations center, and then quickly arranged for aerial refueling from the only tanker in the area so the attack could go ahead. The crew managed that while limiting communication so enemy forces wouldn’t be alerted, and with minimal lighting.

There was no playbook for stopping an out-of-control RC-135S "Rivet Ball" reconnaissance plane on an icy airstrip in the windswept Aleutians. So Maj. John Achor, the commander of the Rivet Ball, made one up.

The Department of Defense lab at Offutt Air Force Base that identifies soldiers, sailors, airmen and Marines from past wars will move to a new home, possibly in Bellevue. Rep. Jeff Fortenberry and a bipartisan Congressional delegation toured the lab on Tuesday.

The $176 million runway reconstruction at Offutt Air Force Base will sideline popular air shows for at least the next two years.

The project had been scheduled to begin in December but is now being pushed back to October 2020, with completion one year later. And the cost of the project, estimated at $130 million when it was announced in January, has now jumped to $176 million, said Col. Alan Dayton, who heads Offutt’s 55th Mission Support Group.

Air Force, UNMC conduct 'urgent' tests in Lincoln on use of military jets for coronavirus patients

The Air Force flew six types of aircraft to Lincoln to determine which Air Force transport planes are safest to carry infected passengers when the need arises.

Dau Nguyen, who now lives in Lincoln, is one of 125,000 to 150,000 South Vietnamese refugees who fled the country 45 years ago this week as its army collapsed under an onslaught from communist forces.

A 55th Wing jet on a training flight made an emergency landing at Offutt Air Force Base Thursday morning.

A KC-135R Stratotanker from the 155th Air Refueling Wing in Lincoln will fly over 15 hospitals from Scottsbluff to Omaha.

The social media world wasn't quite sure what to do when the Nebraska-based U.S. Strategic Command tweeted out a bit of gibberish Sunday night on its official Twitter account. 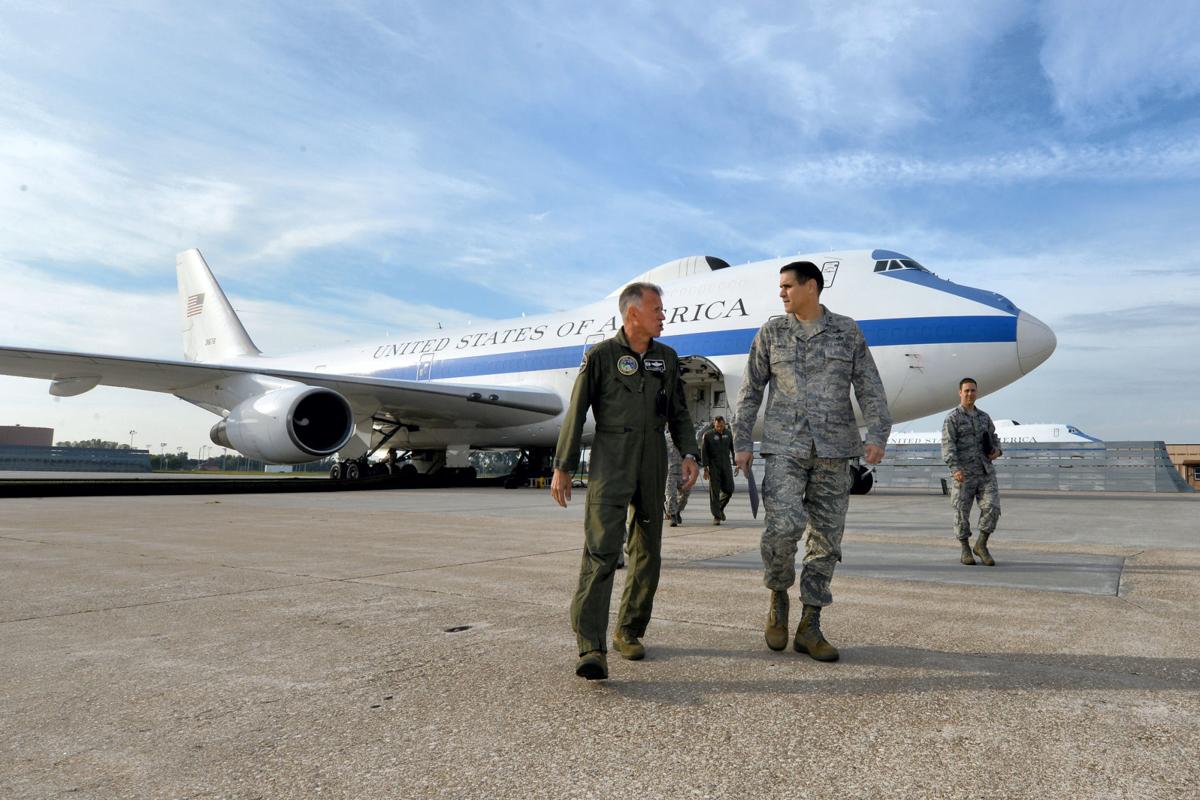 Air Force Col. Russell Mammoser and Maj. Gen. Bradford Shwedo after a tour of the E-4B Nightwatch in 2015. In 2021, the Pentagon is requesting $76.4 million to replace the jets. The new jets would start to join the fleet in the late 2020s. 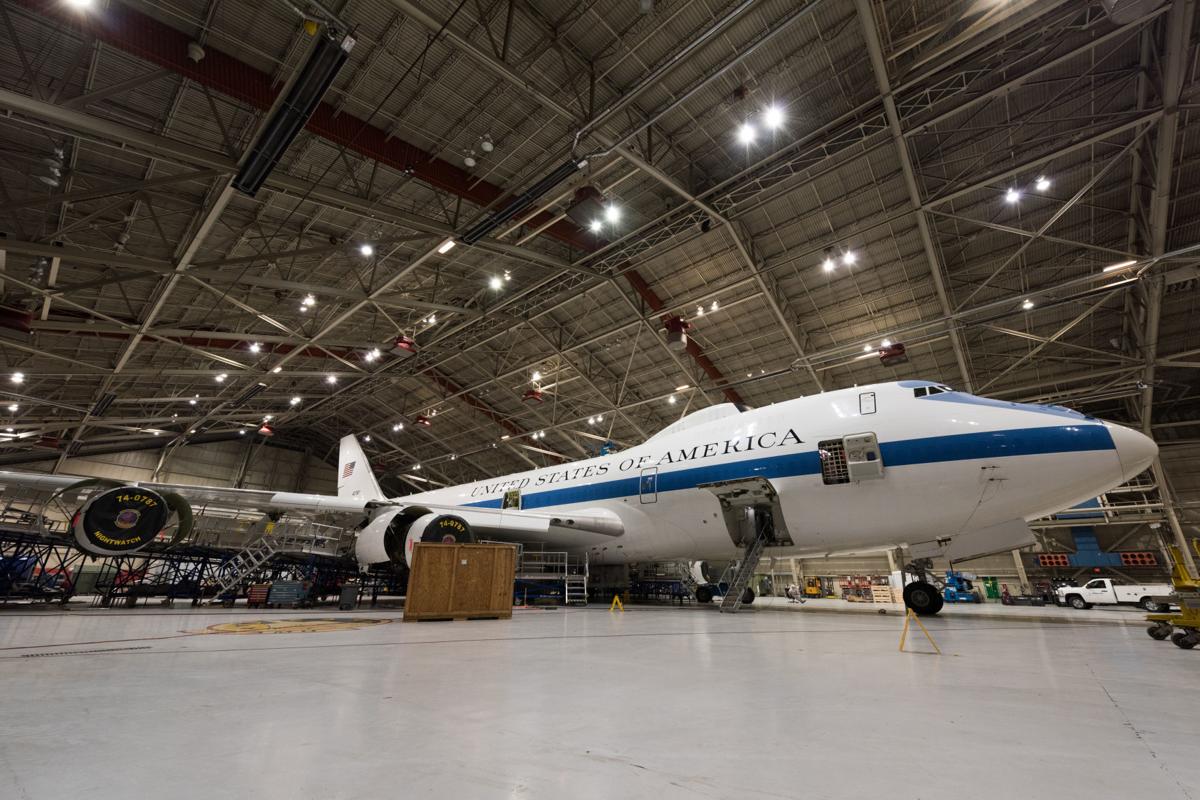