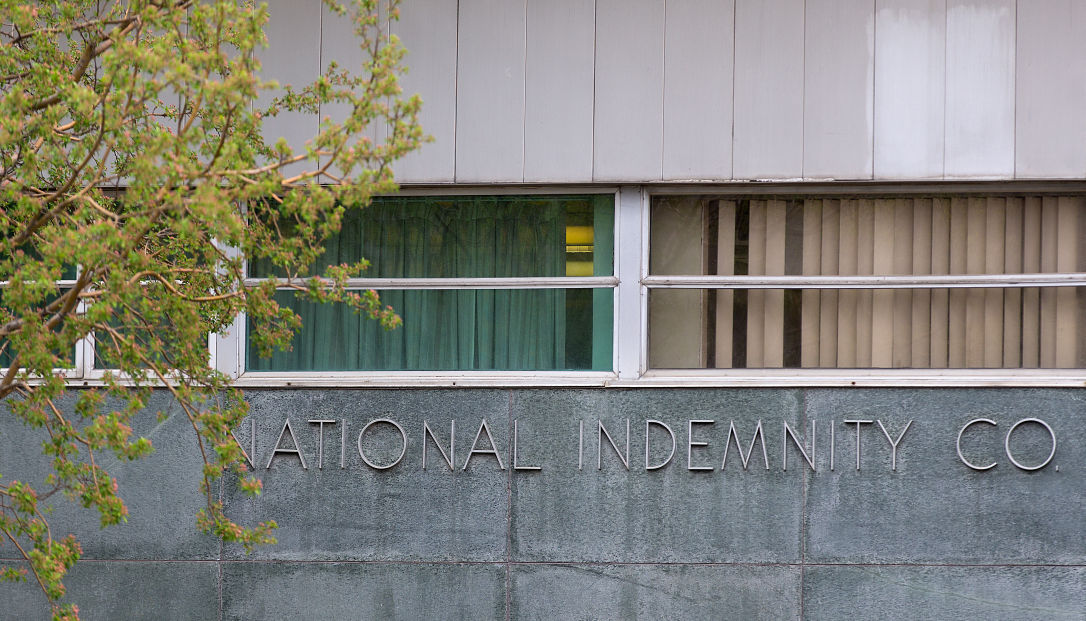 National Indemnity Co. at 30th and Harney Streets in Omaha was the host of the earliest Berkshire Hathaway shareholders meetings in the 1970s. 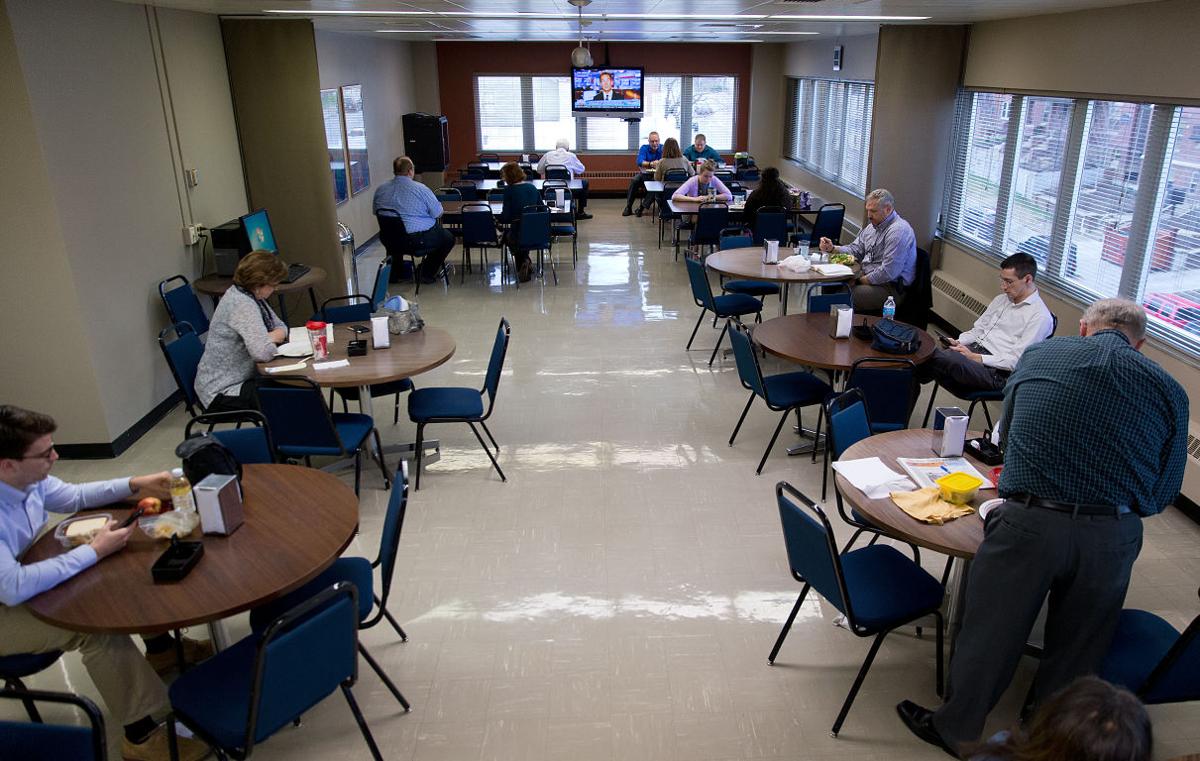 Employees eat lunch in the lunchroom at National Indemnity Co. where the first Berkshire Hathaway shareholder meetings took place in the 1970s.

Once a year, the double doors to National Indemnity Co.’s lunchroom were closed, with a hand-lettered sign taped at eye level:

Inside, alongside the vending machines and a coffee maker, Warren Buffett called the annual meeting of Berkshire Hathaway Inc. shareholders to order. The fourth-floor lunchroom was the biggest space available at a Berkshire-owned Omaha business, plenty big enough for the score of people expected.

As chairman, Buffett went through the perfunctory official business in about five minutes, and then some of the people left. “I’ve got an hour, and if anybody wants to stick around and talk about the investment business, I’m available,” he told those remaining.

Bill Scargle, who attended the 1979 meeting, stayed and listened. “That hour changed my life,” the retired stockbroker told The World-Herald.

Ever since, shareholders have been coming to Omaha hoping for similar life-changing lessons from Buffett. They outgrew the lunchroom and, year by year, filled larger and larger Omaha venues, attracted by Buffett’s financial success, his clear-minded discussions and his sidekick, Charlie Munger.

His admirers overflowed Joslyn Art Museum, where his mother, Leila, fell on the stairs and skinned her shin after one meeting. (During the meeting a baby cried out. “That’s my grandson,” Buffett said. “He just heard my policy on inheritance.”)

They packed the historic Orpheum Theater, where Buffett poured Coca-Cola in the lobby before taking the stage. (“Why did Berkshire’s stock go down?” 9-year-old Nicholas Kenner of New York asked Buffett in 1990. “You’re underage,” Buffett retorted. “Throw him out.”)

They swamped the Holiday Inn at 72nd and Grover Streets (Buffett said in 1995 that the investment firm Salomon Inc. “clearly has some problems”) and, later, Ak-Sar-Ben’s coliseum, where parking, for once, was plentiful.

They jammed the Omaha Civic Auditorium, now slated to be demolished (“There are all kinds of people with high IQs that go no place,” Buffett said in 2002), before settling in at the Qwest Center, now named the CenturyLink Center, in 2004 (“We are at or near the apex of a great civilization,” Vice Chairman Munger said in 2005).

Buffett’s appeal seems obvious now, but it took nearly two decades for large numbers of people to pay attention to him and attend Berkshire’s annual meetings so they could hear him firsthand.

In the pre-Buffett days, Berkshire shareholders met at the Massachusetts textile company’s office in New Bedford. The stock was controlled by the Stanton family, and the meetings were dry and rapid, no shareholder questions allowed.

Buffett acquired control in 1965 — 50 years ago this spring — but the first several shareholder meetings continued in Massachusetts. He took time to answer shareholders’ questions, although few of them attended, according to Buffett biographer Roger Lowenstein.

Word about Buffett’s expertise and his once-a-year openness to questions began to spread after he brought the meeting to Omaha.

Scargle, the retired broker, had invested in Blue Chip Stamps, a California company that sold trading stamps to supermarkets in an early customer-loyalty venture. Buffett was a much bigger Blue Chip investor, enough that he got a seat on the company’s board of directors.

“I went to the Blue Chip annual meetings, but he was the only director who never came,” Scargle said. “I was puzzled to find out who Buffett was. You had to be on the inside to know about him.”

A friend who went to the 1978 Berkshire meeting in Omaha told Scargle that he met Buffett, so the next year Scargle caught an early-morning flight, went to National Indemnity’s office at 3024 Harney St. and introduced himself.

“You mean you came all the way from San Francisco just for this meeting?” Buffett asked, flattered but somewhat incredulous.

Certainly, Scargle answered. But he didn’t blow any money on a hotel, catching an afternoon flight back home that same day.

Soon after hearing Buffett’s discussion about investing, Scargle invested his $12,000 life savings in Berkshire stock. He has held on to enough of the stock to become a wealthy man and a philanthropist.

“I knew at once this guy was one very smart investor,” said Scargle, now 76. “Nothing has ever changed my mind since. He was very impressive, of course. He explained things. He was like a professor. He was able to make it real clear.”

During a doubtful time with his employer, Scargle sold about three-fourths of his Berkshire shares to pay off debts and buy government securities to ensure his retirement. But he kept enough that he is still “happy,” he said.

Expecting more people the next year, Buffett moved the meeting to the Red Lion Inn in downtown Omaha. By 1985, about 250 people attended, and Munger had teamed up with Buffett to answer questions. The first reporter to publish details of a Berkshire meeting was The World-Herald’s Robert Dorr.

Buffett told shareholders that he couldn’t succeed as well in the future as he had in the past, but added, “I think we may be able to do better than American industry as a whole.”

Look for a similar comment during the meeting today. The refrain is familiar to longtime shareholders.

Sometimes Buffett would have breakfast at the Red Lion coffee shop before the meeting, and people could talk to him then, too.

“Even when it was 100 people, you got to meet everybody,” Scargle said. “People were getting his autograph.” Once he held Buffett’s coat while he signed a $100 bill. Buffett would mingle with the crowd and knew many of the people by name. At one of the Red Lion meetings, he sat down with the shareholders and just talked.

Scargle hasn’t missed a meeting. This year’s session will be his 37th.

“I just go to hear him talk,” Scargle said. “I never tire of listening to him. I’ve met him a few times at dinners. He’s unique. Let’s face it, he's a genius and he’s got a photographic mind, and he’s done it.”

And these days the meetings also are a social event with people who see one another once a year. “It’s not just the meeting anymore,” Scargle said.

Berkshire Hathaway Inc. has held annual meetings in nine different locations — eight of them in Omaha — since Warren Buffett took control of the company in 1965. The meeting sites and attendances:

Coverage from our commemorative section celebrating the 50 years of Berkshire Hathaway and the 2015 shareholders meeting in Omaha.

Their 56-year friendship helped form one of the world’s most enduring and successful business partnerships.

New life, and a nod to the past, as National Indemnity building set to become apartments

It didn’t take much convincing for Todd and Mary Heistand to buy the midtown building upon which grew much of Warren Buffett’s Berkshire Hathaway empire.

National Indemnity Co. at 30th and Harney Streets in Omaha was the host of the earliest Berkshire Hathaway shareholders meetings in the 1970s.

Employees eat lunch in the lunchroom at National Indemnity Co. where the first Berkshire Hathaway shareholder meetings took place in the 1970s.