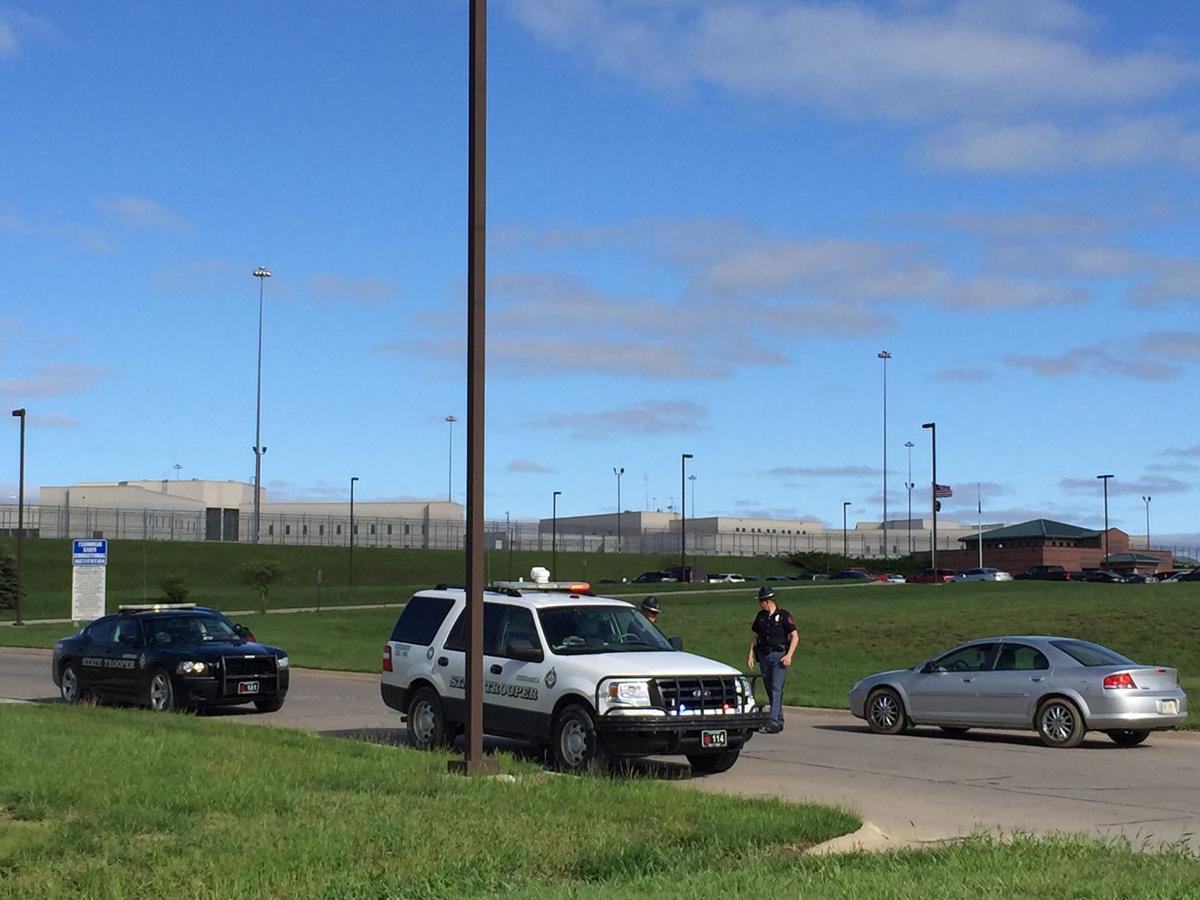 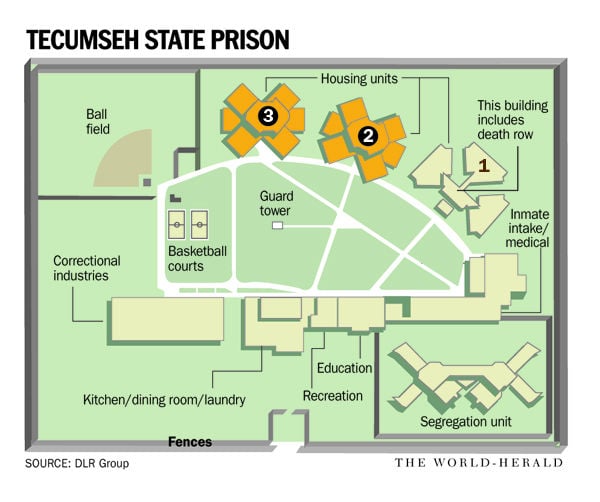 Map showing the layout of the Tecumseh prison grounds. 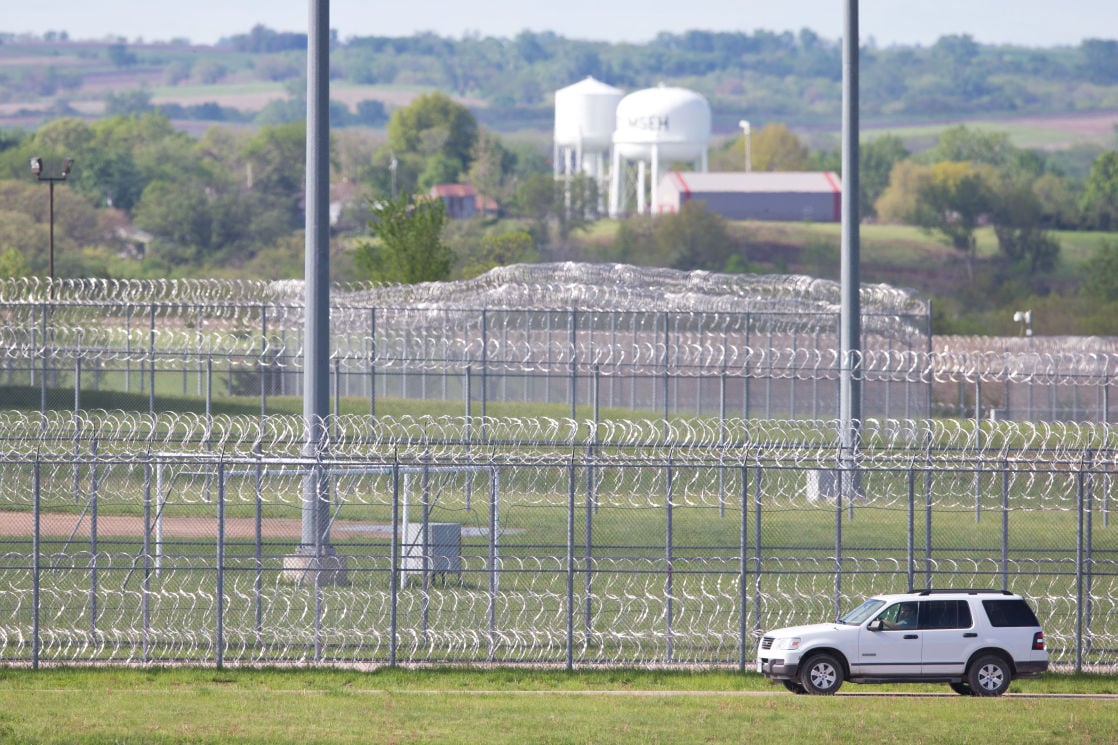 A vehicle patrols the northern edge of Tecumseh State Prison on Monday. 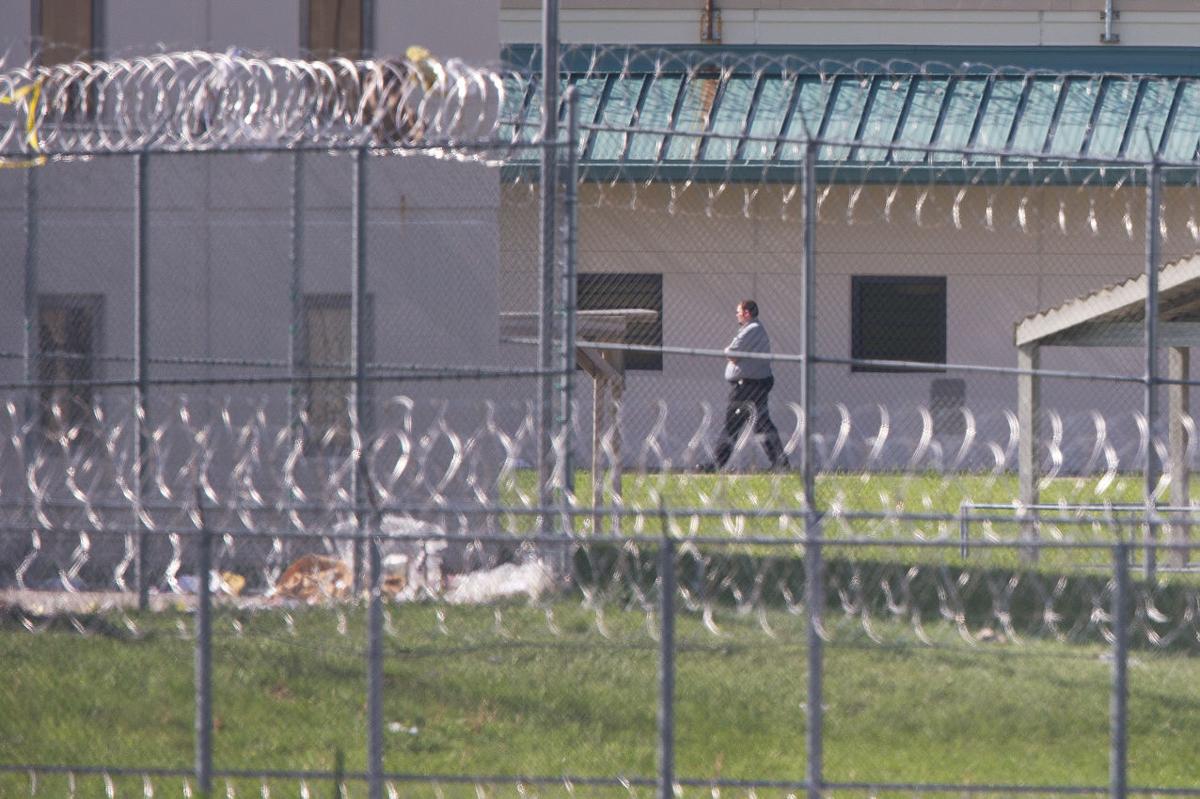 A guard is seen walking through Tecumseh State Prison on Monday.

LINCOLN — Nebraska’s top prison official offered condolences Tuesday to the families of two inmates killed during a weekend riot at the Tecumseh State Prison as investigators worked to identify their killers.

“We’ll pursue criminal charges and hold them accountable through the court system,” said Scott Frakes, director of the Nebraska Department of Correctional Services.

Two 46-year-old men serving lengthy sentences for sexually assaulting children were discovered dead in cells early Monday after a 10-hour takeover of two housing units that began Sunday afternoon. Frakes declined to release how the inmates were killed, pending autopsies that were to take place Tuesday.

The Nebraska State Patrol is investigating the slayings, which are believed to have been carried out by rioting inmates, Frakes said during a press conference alongside Gov. Pete Ricketts.

Frakes said a dollar estimate of the damage had not yet been calculated.

None of the displaced inmates had been moved to the other eight adult prisons in the state’s system, Frakes said.

Frakes said he did not yet know what prompted the riot, which involved 100 to 200 inmates and left two corrections officers and four inmates injured.

“We don’t have any good intelligence or information about what started this,” Frakes said.

He said he had recently met with about 30 inmates at the Tecumseh facility. They expressed concerns about the lack of yard time and activities allowed at the prison, which has been on a partial lockdown status, Frakes said.

“It was a good conversation,” he said. “I didn’t leave that evening with a sense there was an underlying tension.”

Frakes said he was aware of staffing problems at Tecumseh, which include high turnover rates of corrections officers and high rates of mandatory overtime to cover staffing shortages.

A “staffing model assessment” will be conducted this summer to get a better handle on whether staffing is adequate at the prison, Frakes said. But he said he was pleased to hear that all prison employees showed up for work Tuesday.

The lockdown at the Tecumseh prison will continue until further notice, he said. If behavior warrants, some inmates will be allowed to make outside calls as soon as today.

Ricketts said he brought in the new director from Washington state in February to make changes in the Department of Correctional Services and said Frakes should be allowed time to do that.

The governor said that Frakes is already working to change the culture at Corrections and that “Monday morning quarterbacking” about what might have happened is “irresponsible.”

When asked whether the incident at Tecumseh might change his view on constructing a new prison, the governor said that remains way down on his list of options.

“Building a prison will be the absolute last resort,” Ricketts said, adding that Frakes will assess the prison system and prepare a report to be released late this year.

Mike Steadman, a former guard at Tecumseh who now works for the Nebraska Association of Public Employees, said the mandatory overtime — which sometimes results in working double shifts — has to be a factor in the high employee turnover. While he said he understood the decision to move to two 12-hour shifts during the emergency, he predicted that it will put more pressure on prison staff members.

“It already is an issue,” he said. “Single parents are scrambling to find child care for their kids.”

The medium/maximum security facility, the state’s newest, opened in 2001. It includes Nebraska’s death row and the state’s largest solitary confinement unit, but neither unit was reportedly involved in the riot.

The 960-prisoner facility held about 60 more inmates than its design capacity at the time of the riot, which would make it the least overcrowded of the state’s prisons.

By contrast, the Diagnostic and Evaluation Center in Lincoln holds about three times as many inmates — about 340 — as it was designed for.

Officials said 76 additional staff members, along with state troopers and local law enforcement officers, were called in to help quell the disturbance, which began about 2:30 p.m. Sunday and wasn’t under control until about 1 a.m. Monday.

Relatives of Collins and Peacock could not be reached Tuesday.

Although convicted in Box Butte County in northwest Nebraska, Collins was from Kansas, according to court records. The Nebraska Attorney General’s Office handled his prosecution.

Peacock’s wife filed for divorce in December 2013 in Dodge County. A hearing in the divorce case had been scheduled for next week.

Johnson County Attorney Julie Smith, the county coroner, said she was at the prison from 1 a.m. to 4 a.m. Monday. She said she was taken to the bodies of Collins and Peacock in housing unit No. 2. She pronounced the men dead where their bodies were discovered.

Smith said she expected to receive a brief phone call from the Nebraska State Patrol after the autopsies were complete, but a full written report isn’t expected for about three weeks.

Two corrections workers, Cpl. Joseph Hatzenbuehler and caseworker Brandon Guern, were injured during the initial stages of the riot. Both were treated at a local hospital and returned to work.

Four other inmates were injured: one by a gunshot from a guard in a tower, another by a rubber bullet fired by corrections staff and two by other inmates.

Several staff members had to be rescued from the housing units, Frakes said, including a female recreation worker who barricaded herself in an office at the prison gym.

The riot began after a guard tried to break up a gathering of about 40 inmates outside one of the housing units.

Frakes said the department will conduct a critical incident review, which will include input from prison experts outside Nebraska. It will seek to identify what led to the riot and assess the department’s management of the incident, he said. The conclusions will be made public, he said.

» Inmates had control of two housing units, including staff offices

» Control centers were not breached

Housing Units 2 and 3 sustained the most damage:

» One inmate was injured in a “staff use of force”

» Two inmates were killed, apparently by other inmates

The two officials, as well as State Corrections Director Scott Frakes, are scheduled to give a preliminary report Thursday to a special legislative oversight committee.

After deadly prison riot in Tecumseh, some blame understaffing, others overcrowding

State officials were seeking answers Monday after the state’s worst prison riot in recent memory, with one state senator calling for another investigation by the Legislature into problems in the state corrections system.

A 10-hour battle to retake the Tecumseh state prison: Here's how it unfolded

Map showing the layout of the Tecumseh prison grounds.

A vehicle patrols the northern edge of Tecumseh State Prison on Monday.

A guard is seen walking through Tecumseh State Prison on Monday. 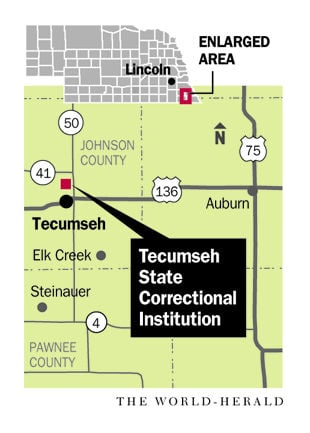