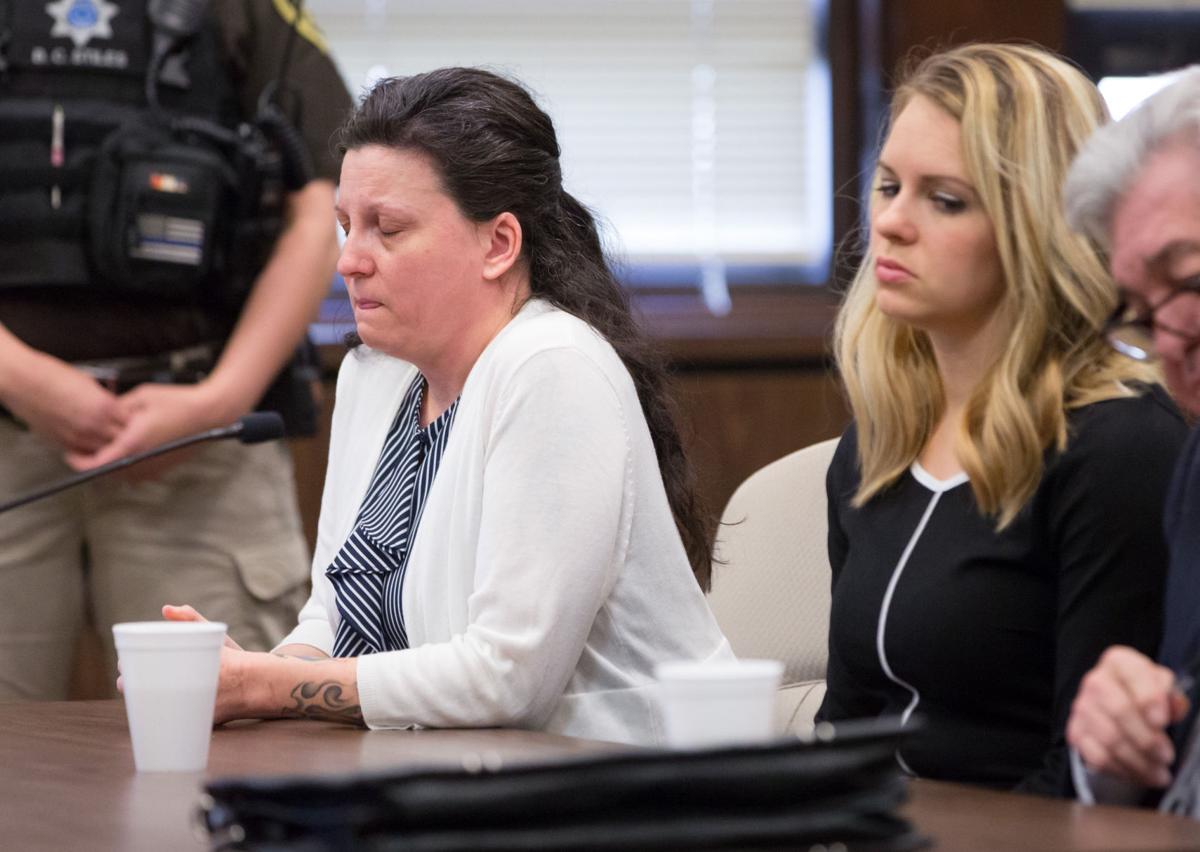 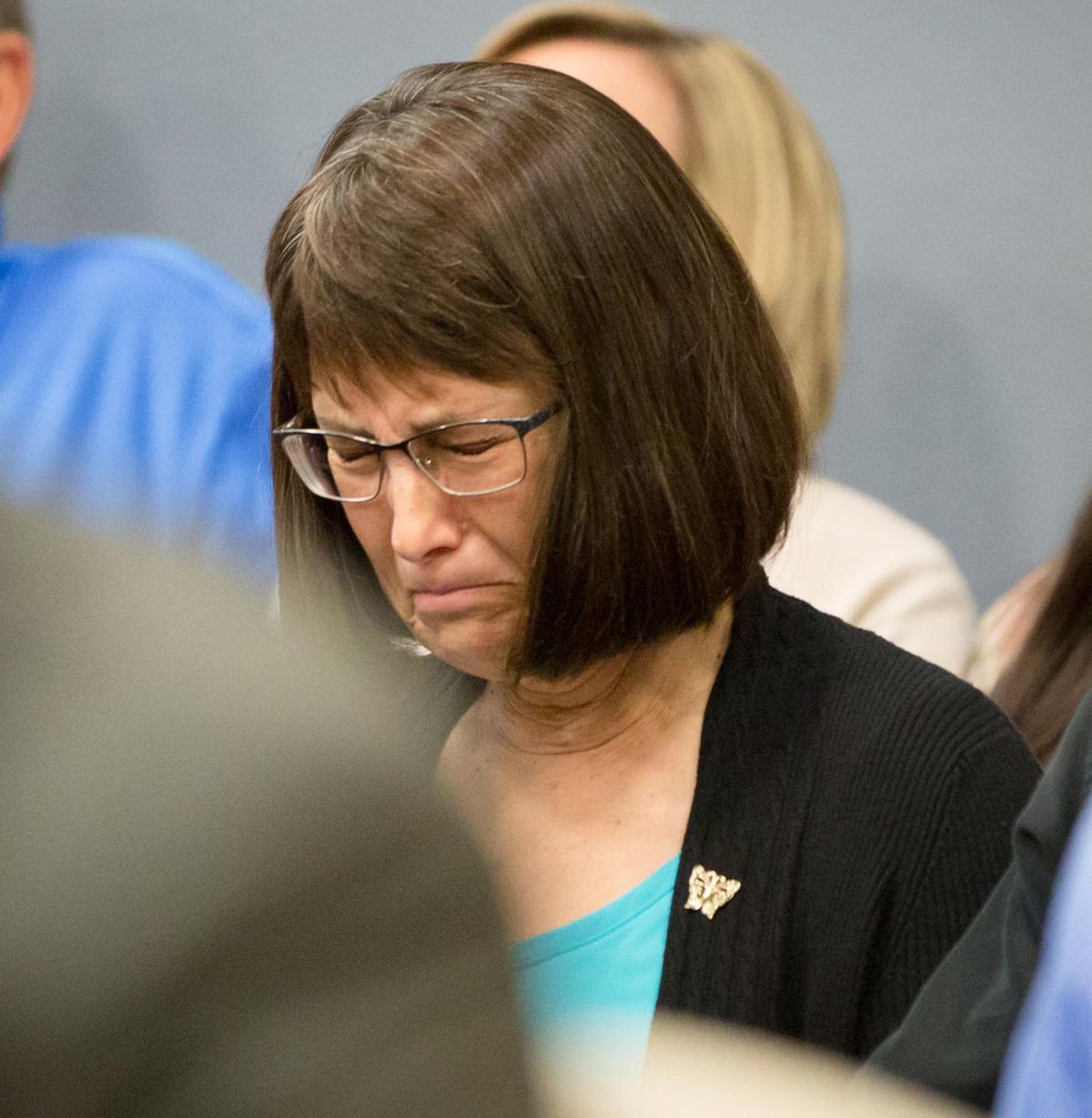 Nancy Raney, mother of Cari Farver, reacts as the guilty verdict is read. 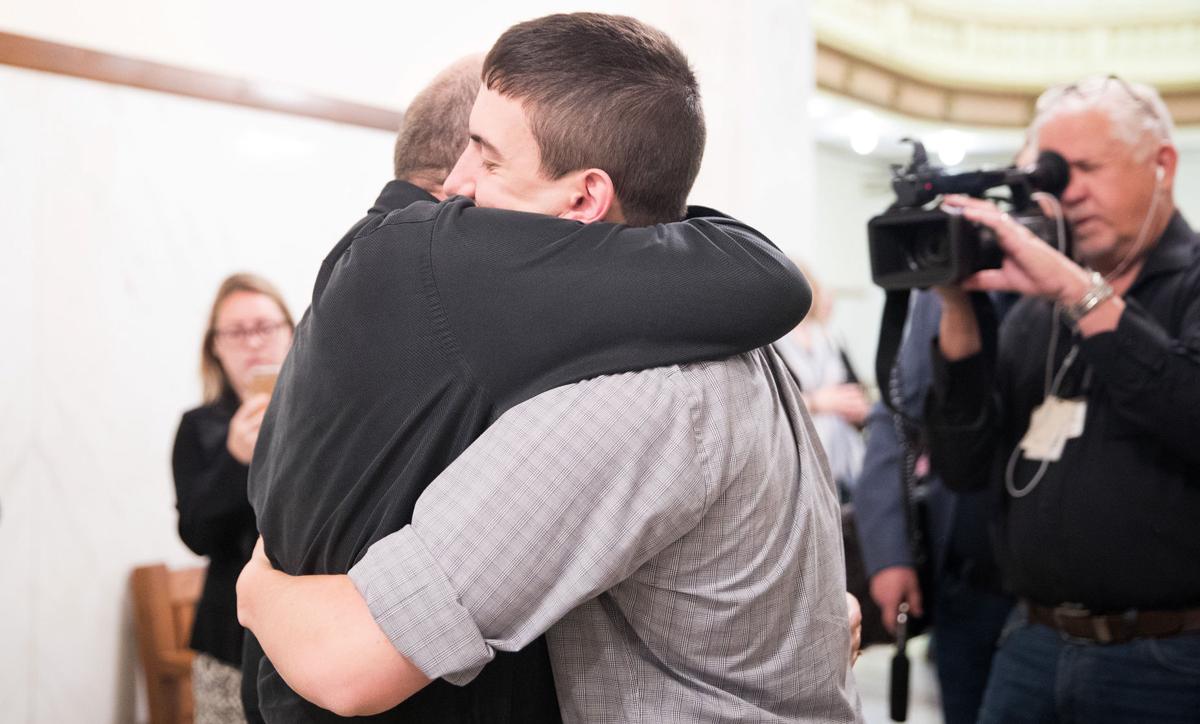 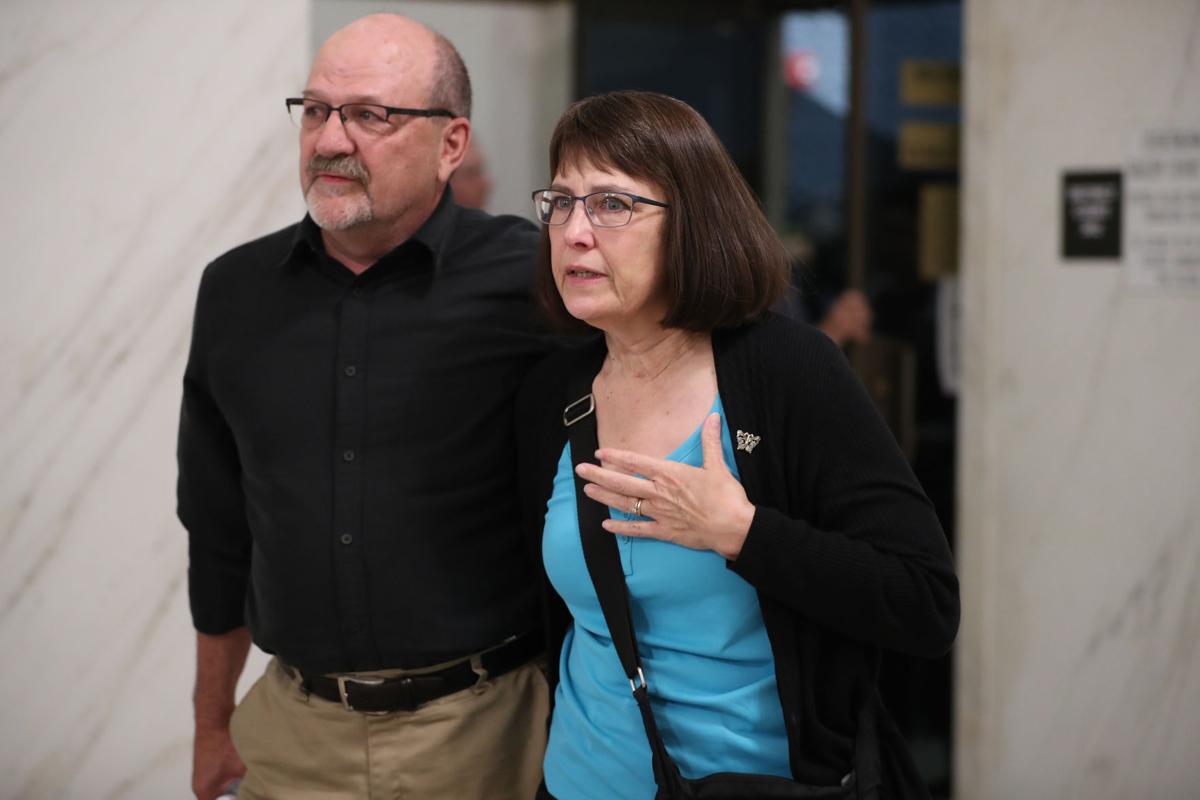 Mark and Nancy Raney leave Judge Timothy Burns' courtroom after he issued a guilty verdict Wednesday against Shanna Golyar on charges of first-degree murder in the 2012 slaying of Nancy's daughter Cari Farver. 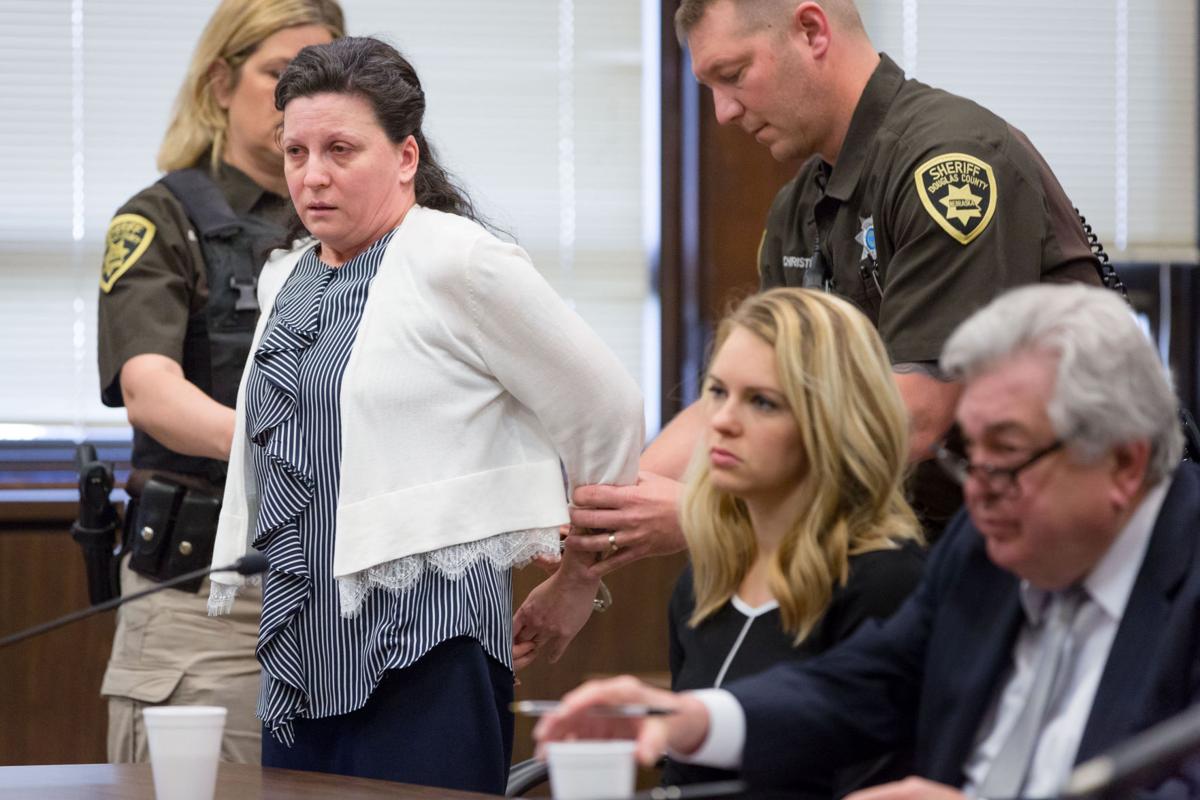 Shanna Golyar is taken from a Douglas County courtroom after the verdict. 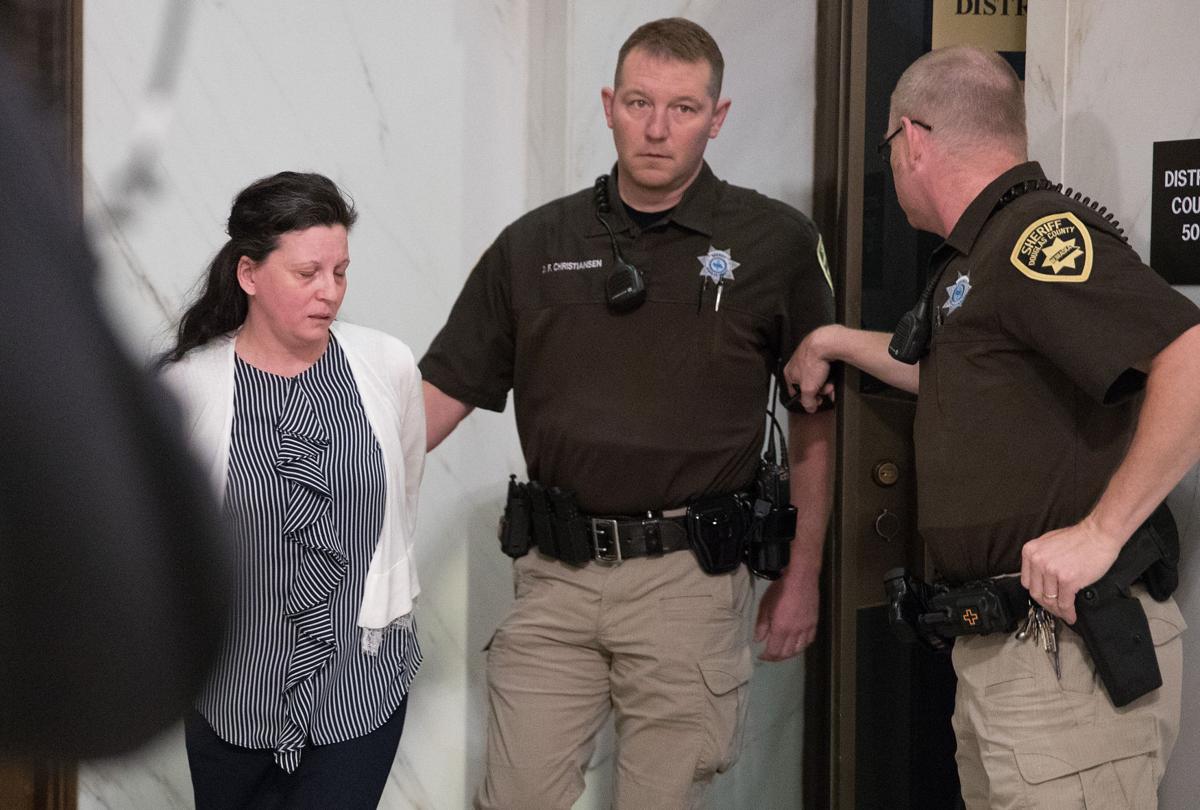 Shanna Golyar leaves Judge Timothy Burns' courtroom after he issued his guilty verdict on Wednesday, May 24, 2017. 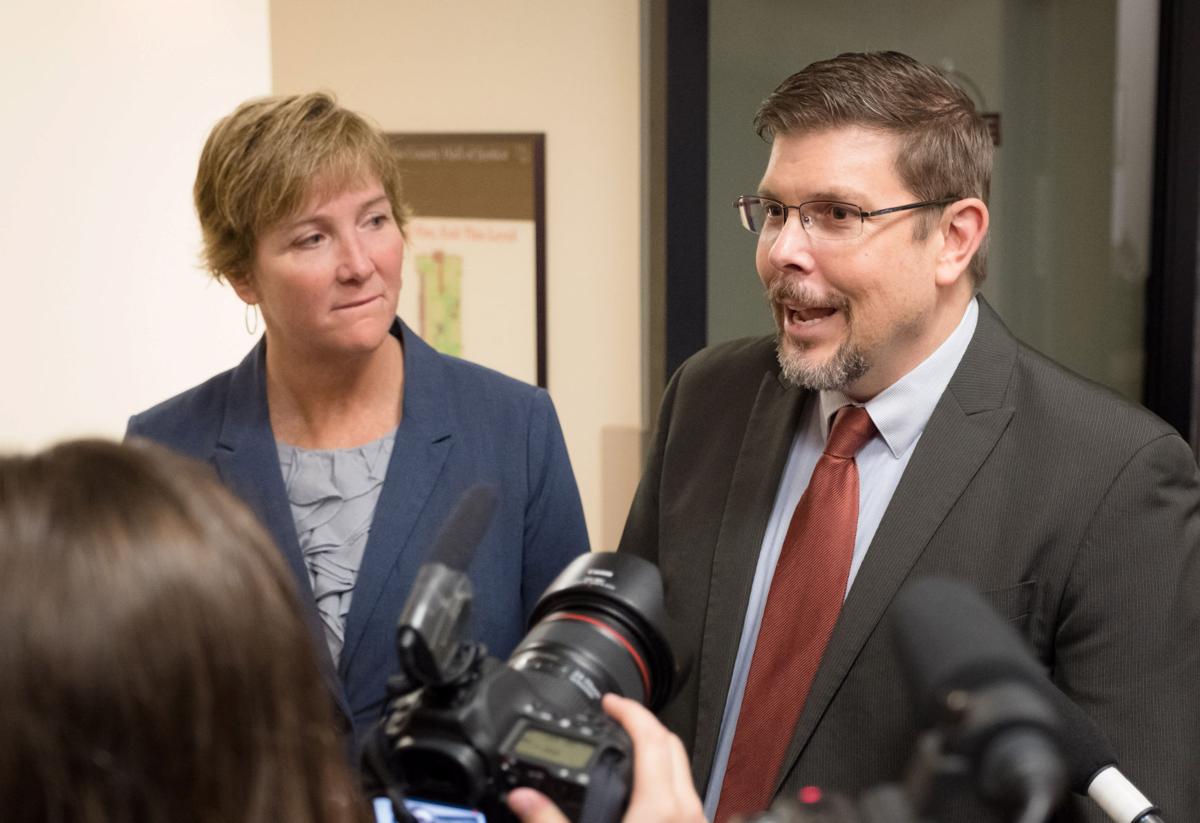 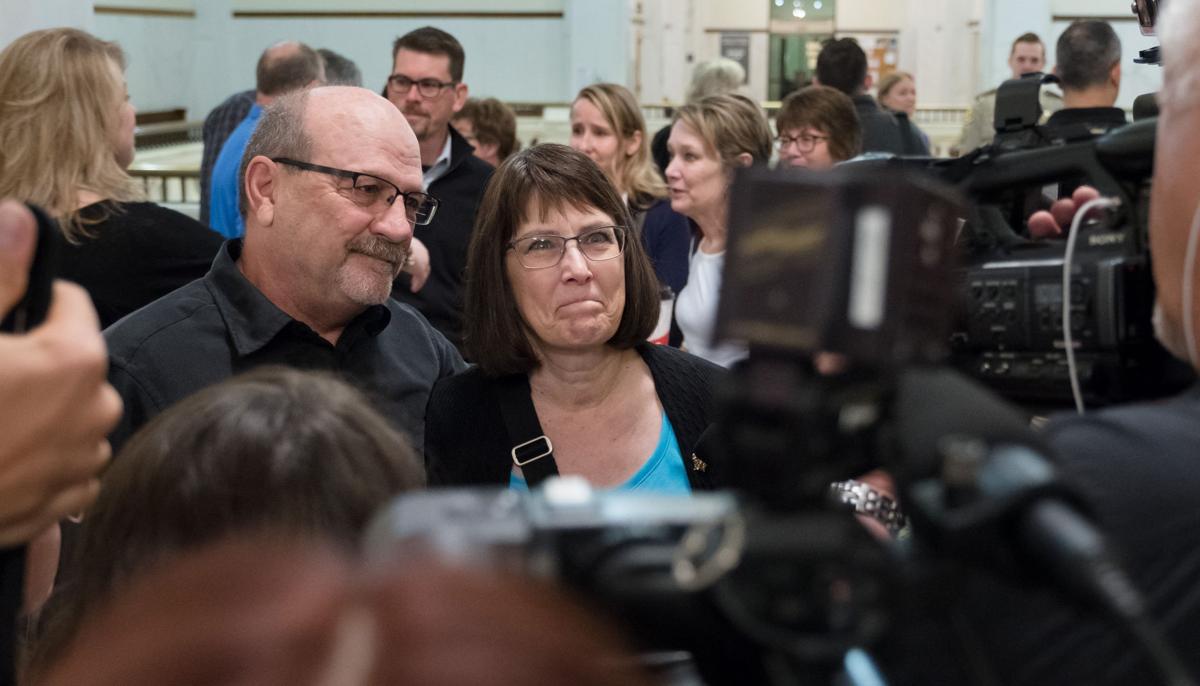 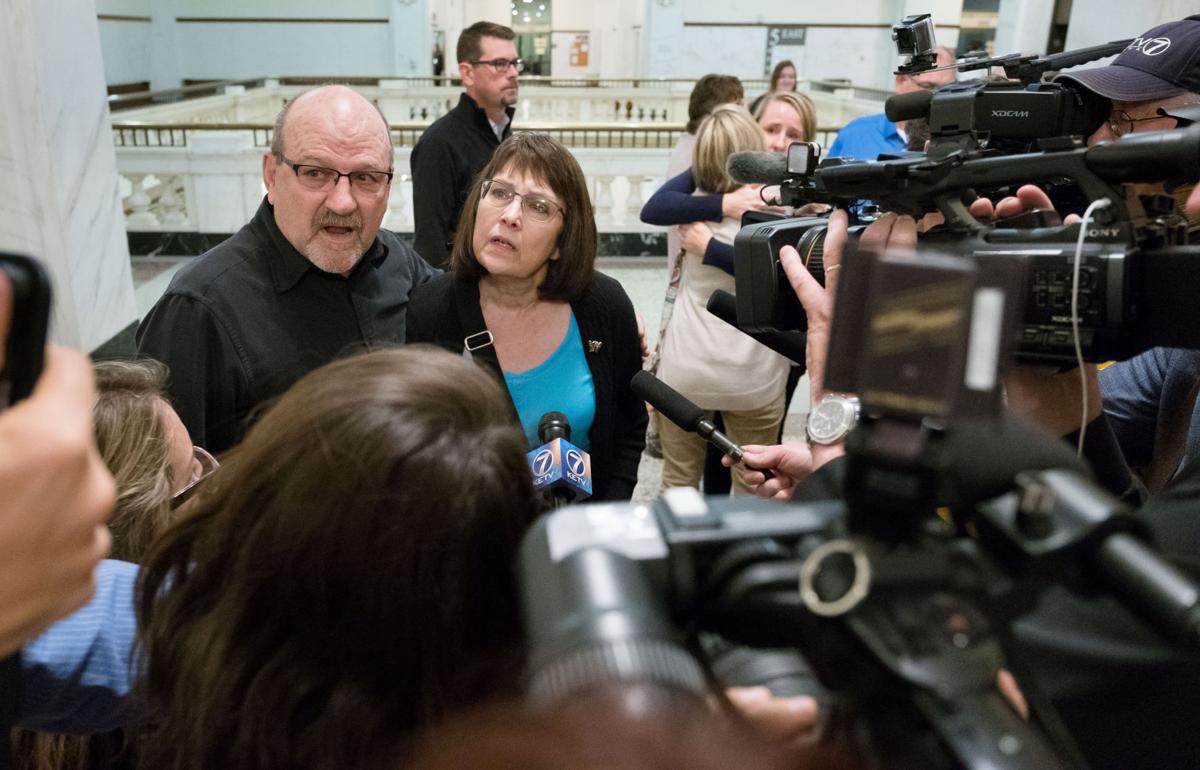 Mark and Nancy Raney talk with the news media outside the courtroom Wednesday after the judge handed down his verdict. 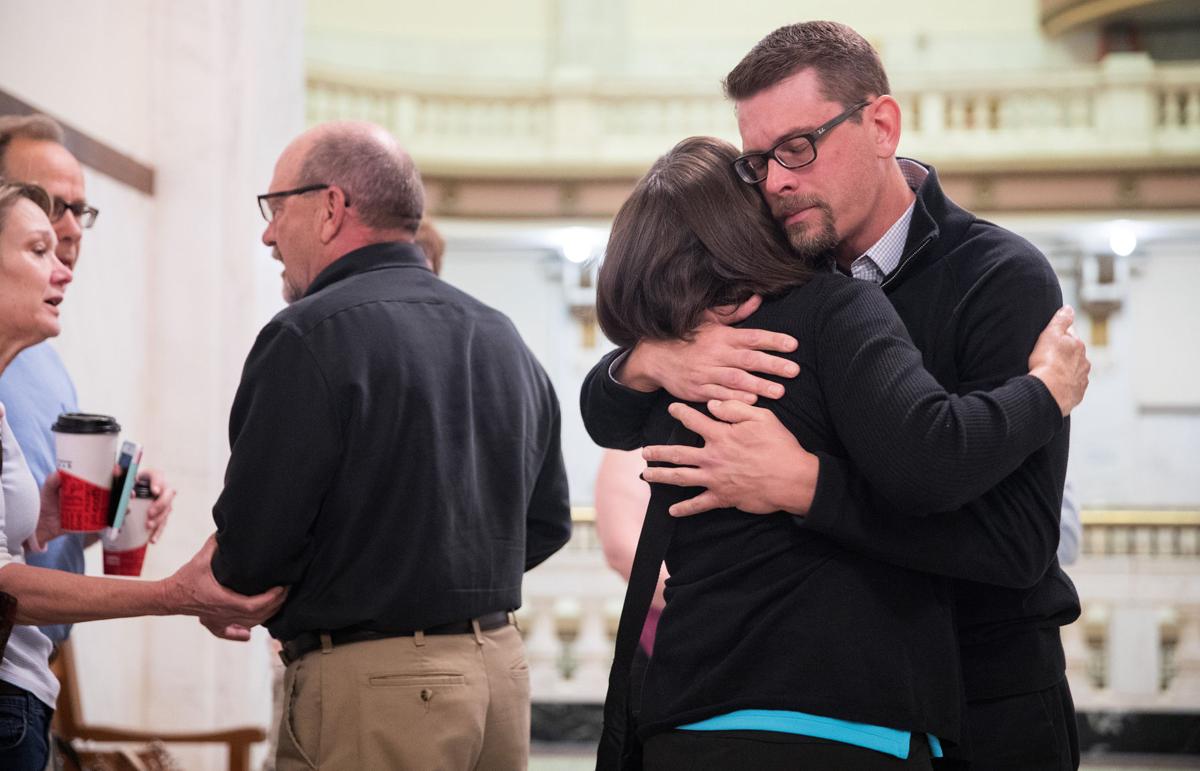 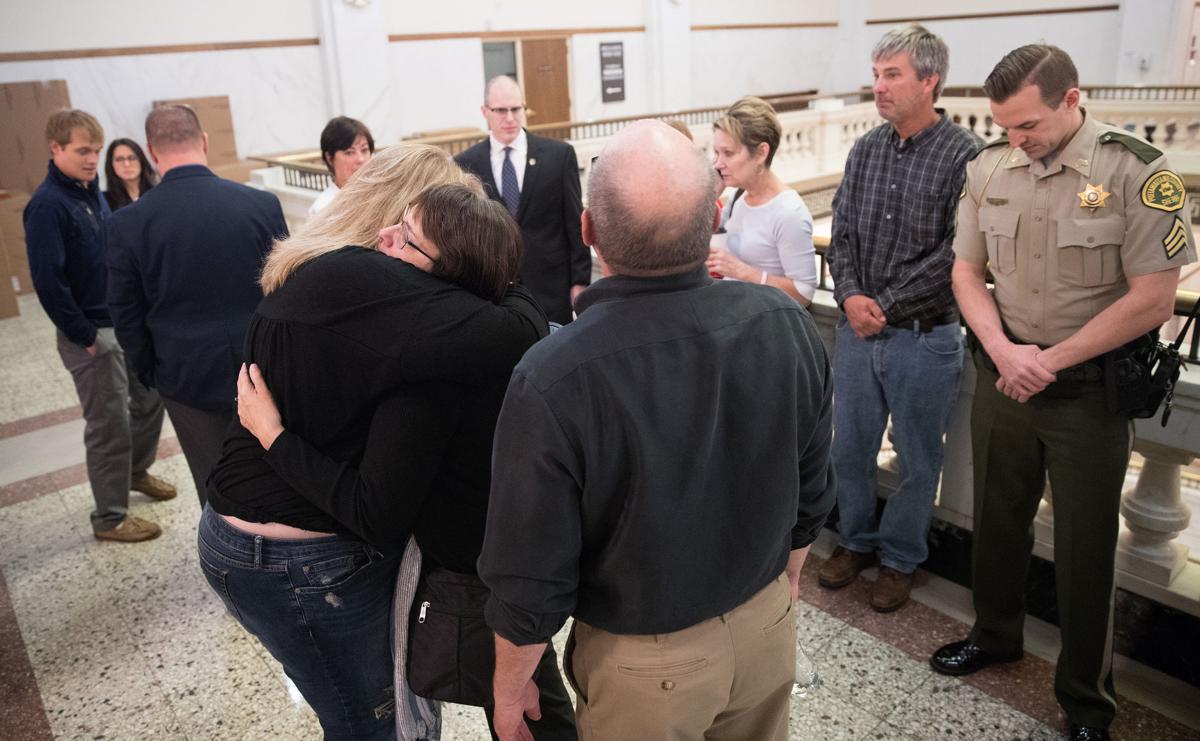 Nancy Raney knew all along that her daughter, Cari Farver, didn’t all of a sudden leave her family willingly.

Farver was a loving and hardworking mom — she rarely missed the sports games or band concerts her son, Max, was involved in.

She didn’t post expletives or threaten others with misspelled rants, as her online persona suddenly did.

That was Shanna Golyar, who brutally killed Farver in November 2012 and posed as Farver for years in fake emails and Facebook accounts to cover up the murder.

And on Wednesday, Raney said, everyone learned the truth.

“This morning, finally, all of that came to a head,” Raney said in a phone interview hours after the verdict. “She’s got her name back. It’s not tarnished.”

Douglas County District Judge Timothy Burns found Golyar guilty of first-degree murder and second-degree arson Wednesday morning, after 10 days of trial. She will be sentenced to life in prison in August.

Golyar killed Farver after Farver spent the night at the apartment of the man both were dating.

“Cari Farver did not voluntarily disappear and drop off the face of the earth,” Burns said just before delivering his verdict. “Very sadly, she was murdered.”

Golyar was so obsessed with the cover-up, she set fire to her own Omaha home — killing her two dogs, cat and snake — and blamed Farver, whom she had killed nine months earlier.

Golyar’s face reddened upon hearing the verdict. She kept her eyes closed as deputies led her out of the courtroom.

Raney wept, hugging her husband, Mark Raney. Farver’s father had died of cancer a month after she was killed. Farver didn’t attend the funeral even though the two were close — another clue that something was horribly wrong.

Farver’s relatives and friends were visibly relieved outside the courtroom, hugging one another and the detectives who worked the case for years. One woman pumped her fist, another cried out, “Finally ... finally.”

Max Farver, who now studies engineering at a nearby college, smiled and had few words.

Both Max and Raney had testified that they received messages from Golyar, who used Farver’s phone and created a new fake Facebook profile under Farver’s name.

Raney also got a message from the fake profile on Mother’s Day — the possibility that Farver was still alive tortured her family.

“It’s been horrid, never knowing whether she was really out there or not,” Raney said. “Nobody should have to go through this.”

Anthony Kava, a special deputy with the Pottawattamie County Sheriff’s Office, linked dozens of fake email accounts to Golyar, who sent thousands of emails pretending to be Farver and others. Kava examined memory cards and digital devices that Golyar took from Farver’s home and found deleted photos of Farver’s family, plus a photo of Farver’s tattooed foot that appeared decomposed. The digital forensic work on the case was tremendous and damning. Authorities never recovered Farver’s body or remains — just blood on the front passenger seat of her SUV.

“It was a lot of work by a lot of people,” said Kava, who testified for three days. “And it was important, because we did it for the family.”

Detectives worked together across the Missouri River — Farver disappeared from Omaha but lived in Macedonia, Iowa. And Golyar moved to Council Bluffs, then Persia, Iowa, after setting fire to her own Omaha home. Authorities believed Farver was killed in Douglas County, where the case was tried.

“This was a true collaboration,” said Chief Deputy Douglas County Attorney Brenda Beadle, adding that Pottawattamie County Sheriff’s Office deputies worked with attorneys daily on the case. “It’s just a gratifying feeling. All the work that was put into this, and finally coming to that conclusion is a nice feeling.”

Golyar’s attorney, James Martin Davis, credited Beadle and fellow prosecutor Jim Masteller for their work in weaving together the hundreds of pieces of evidence.

“In my three or four decades of practicing law, it’s one of the most powerful presentations of circumstantial evidence that I’ve ever seen,” Davis said. “I can’t quarrel with the judge’s verdict in this case. He ruled based on all the evidence.”

Farver’s mother said the most difficult part was listening to the emails Golyar sent with vivid and disturbing details of the final moments of Farver’s life. The emails said that Farver was stabbed in the stomach and chest, that she begged to talk to her family, that she was burned, stuffed in garbage bags, rolled in a tarp and left in a dumpster. It’s unclear exactly what happened, but prosecutors regarded those emails as a confession.

“If any of them are true, any inkling of it ... that’s your worst fear, that something happened to your child,” Raney said. “This fear that something was wrong with her, and I couldn’t get to her.”

Raney wants to ask Golyar why she did it — Farver hadn’t been in a relationship with the man for very long, and it was casual.

“It would be nice if at least (Golyar would) say she’s sorry. That she deprived my grandson of his mother,” Raney said. “But I don’t know that there’s really anything she could say to me. Because Cari’s gone. Nothing will bring her back.”

Raney is considering holding a celebration of her daughter’s life, now that it’s been made clear that her life was cut short. Farver wouldn’t have wanted a funeral, Raney said, or a headstone.

“She would have wanted a party and a big gathering,” Raney said. “She wanted to be cremated and thrown to the wind. It bothers me that I can’t do that for her.”

Her daughter’s face is ingrained in her mind. Raney said she will always remember the last day she saw her loyal, caring daughter, who was also a doting mother — November 11, 2012, two days before Farver was killed.

“She loved life,” Raney said. “I just wish she could have had more of it.”

In September 2015, for example, someone logged into Cari Farver’s fake profile using a device at a Council Bluffs address — the same address as Shanna Golyar’s boyfriend’s home, where she was living at the time.

Nancy Raney, mother of Cari Farver, reacts as the guilty verdict is read.

Mark and Nancy Raney leave Judge Timothy Burns' courtroom after he issued a guilty verdict Wednesday against Shanna Golyar on charges of first-degree murder in the 2012 slaying of Nancy's daughter Cari Farver.

Shanna Golyar is taken from a Douglas County courtroom after the verdict.

Shanna Golyar leaves Judge Timothy Burns' courtroom after he issued his guilty verdict on Wednesday, May 24, 2017.

Mark and Nancy Raney talk with the news media outside the courtroom Wednesday after the judge handed down his verdict. 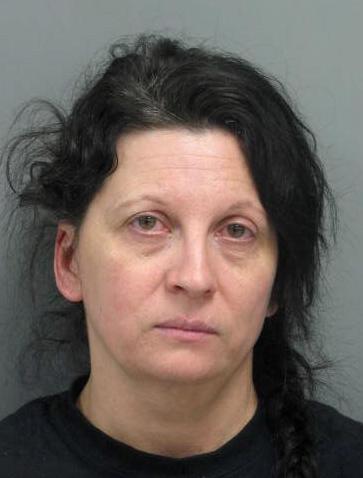 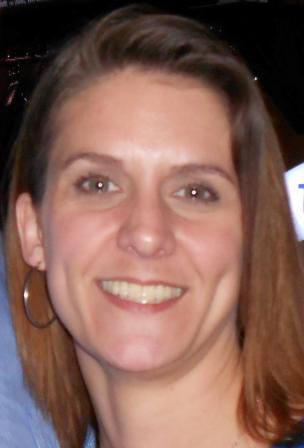