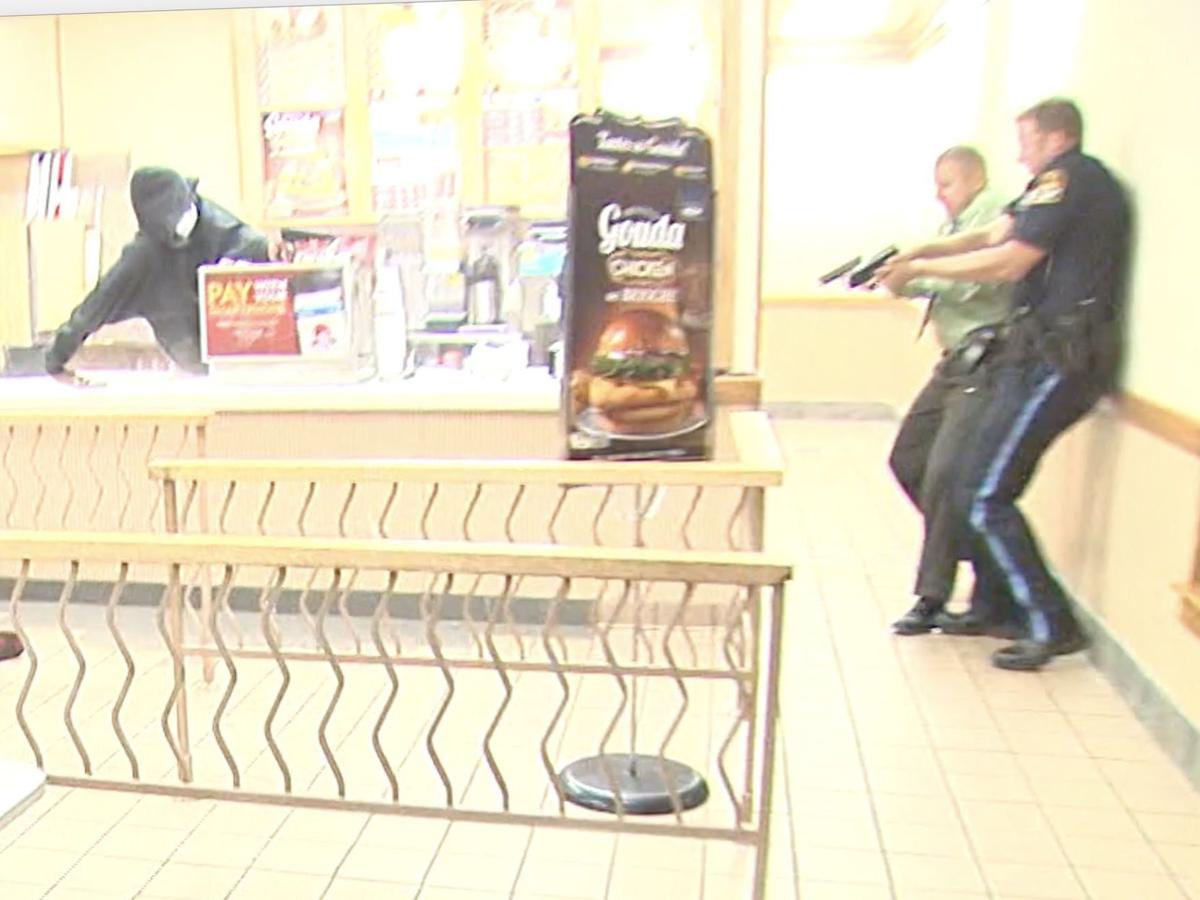 Frame capture from Aug. 26, 2014, from Cops TV show showing Omaha police shooting at a robbery suspect inside Wendy’s restaurant at 4308 Dodge St. after a report of a robbery. Cops TV crew member Bryce Dion was killed along with robbery suspect Cortez Washington. 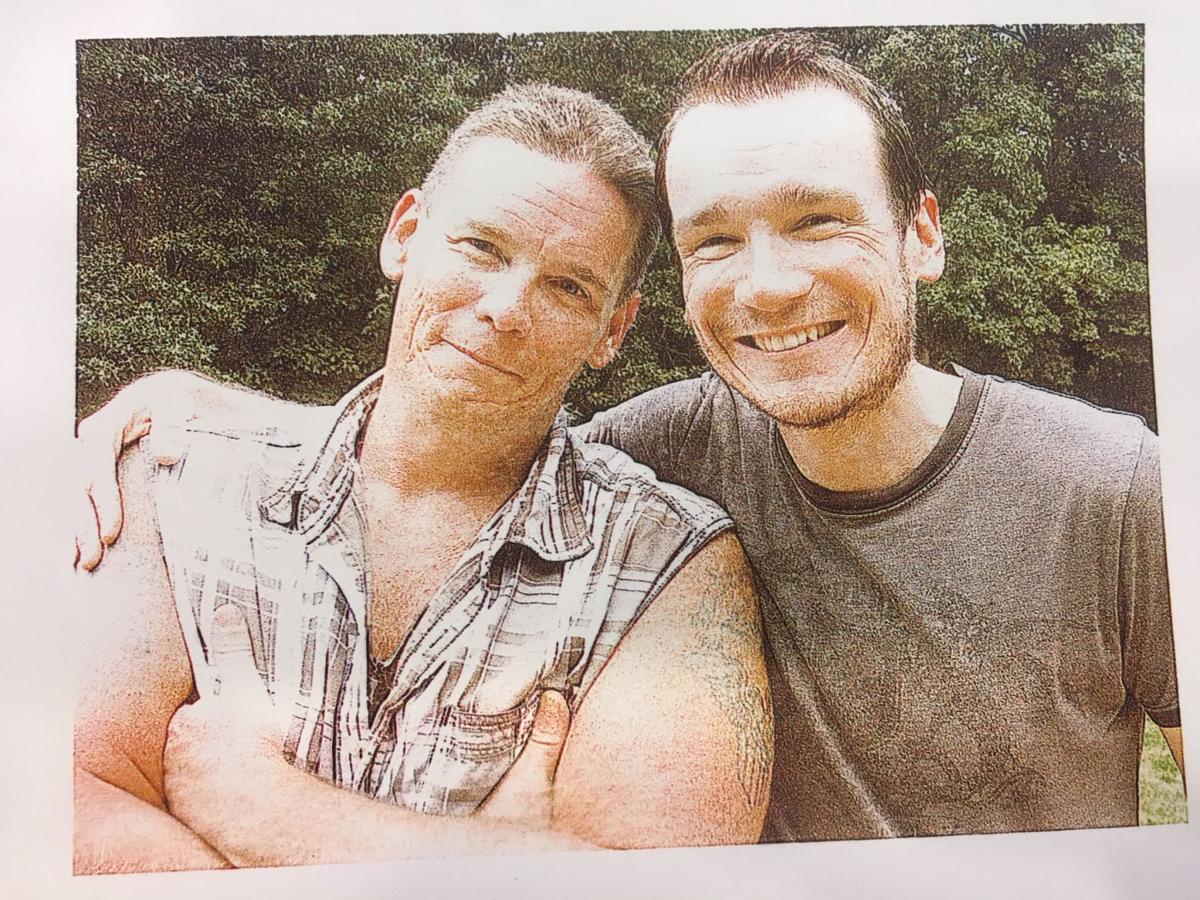 The three Omaha police officers fired 36 times in 17 seconds at a robber they confronted inside a fast-food restaurant in Omaha — striking and killing both the robber and, by accident, a “Cops” television show sound technician.

Thursday, a Douglas County district judge ruled that the officers’ actions were reasonable.

“When (the robber) pointed his handgun at the officers of the Omaha Police Department who had responded to the restaurant, those officers were forced to make split-second decisions in their use of deadly force under circumstances that were tense, uncertain and rapidly evolving,” Masteller wrote.

“In responding to this imminent threat with deadly force, the officers at all times acted reasonably.

“However, this calculation does not make Bryce Dion’s death any less tragic. In addition to being a loving son and brother, Bryce Dion was undoubtedly courageous and a credit to his profession.”

Brian Jorde, an attorney for Dion’s mother, Gloria, and brother, Trevor, said he “respectfully disagrees” with the judge’s order. He said he will talk with his clients about whether to appeal.

Both at the February trial and again on Thursday, Jorde questioned the propriety of Omaha police officers firing 24 of the 36 shots at robber Cortez Washington as Washington fled the Wendy’s restaurant at 43rd and Dodge Streets, his back to the officers.

The officers have testified that they did not see Dion in the vestibule as they were firing upon Washington about 9:20 p.m. Aug. 26, 2014.

Officers should have known that Dion — a member of a two-man crew on its last night trailing the officers for the TV show — was in the vestibule, Jorde said. A bullet slipped through the opening in the armpit of Dion’s bulletproof vest, killing the 38-year-old.

“It was very clear where Bryce was,” Jorde said. “That’s basically saying you can fire in the direction of an innocent person in the hopes that you might strike someone who is running away with his back to you.”

Masteller highlighted the split-second reactions that officers had to make. The judge noted that Officers Jason Wilhelm and Brooks Riley and plain-clothes detective Darren Cunningham had confronted a robber who fired what they believed to be a weapon directly at them, at point-blank range.

“Although it was later determined that the firearm was a pellet gun, the officers reasonably believed that it was a real firearm,” Masteller wrote.

Masteller agreed with Omaha Police Chief Todd Schmaderer and assistant Omaha city attorney Ryan Wiesen’s contention that police officers were justified in continuing to fire. Washington, perhaps fueled by PCP that was found in his system, was able to run into the parking lot before collapsing and dying.

“The officers continued to discharge their firearms at Washington after he lowered his firearm, exited the restaurant and ran through the parking lot because they believed that he continued to pose a threat to their lives and the lives of others as he was fleeing,” Masteller wrote.

Officers discharged their firearms because they believed their lives “and the lives of others were in danger,” Masteller wrote.

That they were shooting directly at Washington was corroborated by the line of bullets through the glass, the judge wrote.

“What is evident from …photos is that the officers’ shots were fired in a directed, not haphazard, manner.”

Jorde had argued that Schmaderer should have developed a protocol for his police officers after agreeing to allow the show to film in Omaha.

Schmaderer has said he regrets his decision to allow the filming, after several previous chiefs refused that request. Schmaderer attended and spoke at Dion’s funeral in the Boston area.

The only rules that Schmaderer and his staff developed: They requested that “Cops” not film as Omaha police tried to clear large gatherings so that crowds wouldn’t play to the cameras.

Jorde said Omaha police should have made the “Cops” crew wear vests that showed they were members of the media.

And the officers who were with Dion that day — Riley and Wilhelm — should have instructed the camera crew to stay at a distance as they entered a combustible crime scene, he said.

Masteller rejected Jorde’s argument that Omaha police should have taken special steps to protect the crew. The “Cops” show has made a name for itself by being on top of the action, with crews sometimes chasing down suspects alongside the officers.

Officers had testified that Dion himself had previously told “Wilhelm and Riley that they should ‘act like we are not here,’ ” Masteller noted.

“Bryce Dion was wearing a bullet-resistant vest at the time he sustained his gunshot wound — which is indicative that Bryce Dion understood the potentially dangerous nature of accompanying on-duty law enforcement officers,” the judge wrote.

In closing arguments, the attorney for Bryce Dion's family outlined steps officers should've taken in responding to a robbery at a Wendy's in 2014. An attorney for the city said the officers' "entire use of force was reasonable" and that Dion wasn't forced to go into the restaurant with officers.

A Douglas County district judge has refused the City of Omaha's request to bar the release of the video, which shows the fatal shooting of a crew member of the "Cops" TV program and a man firing a pellet gun at police.

People who attended the ribbon cutting got to see $1.2 million in hangar renovations.

Lincoln man identified as homicide victim in shooting near Fairbury

Three men and two women have been arrested in connection with the death of Marc C. Jarrell of Lincoln.

When rescue personnel tried to load the woman on a stretcher, the carpet stuck to the festering sores on her side.

Frame capture from Aug. 26, 2014, from Cops TV show showing Omaha police shooting at a robbery suspect inside Wendy’s restaurant at 4308 Dodge St. after a report of a robbery. Cops TV crew member Bryce Dion was killed along with robbery suspect Cortez Washington.