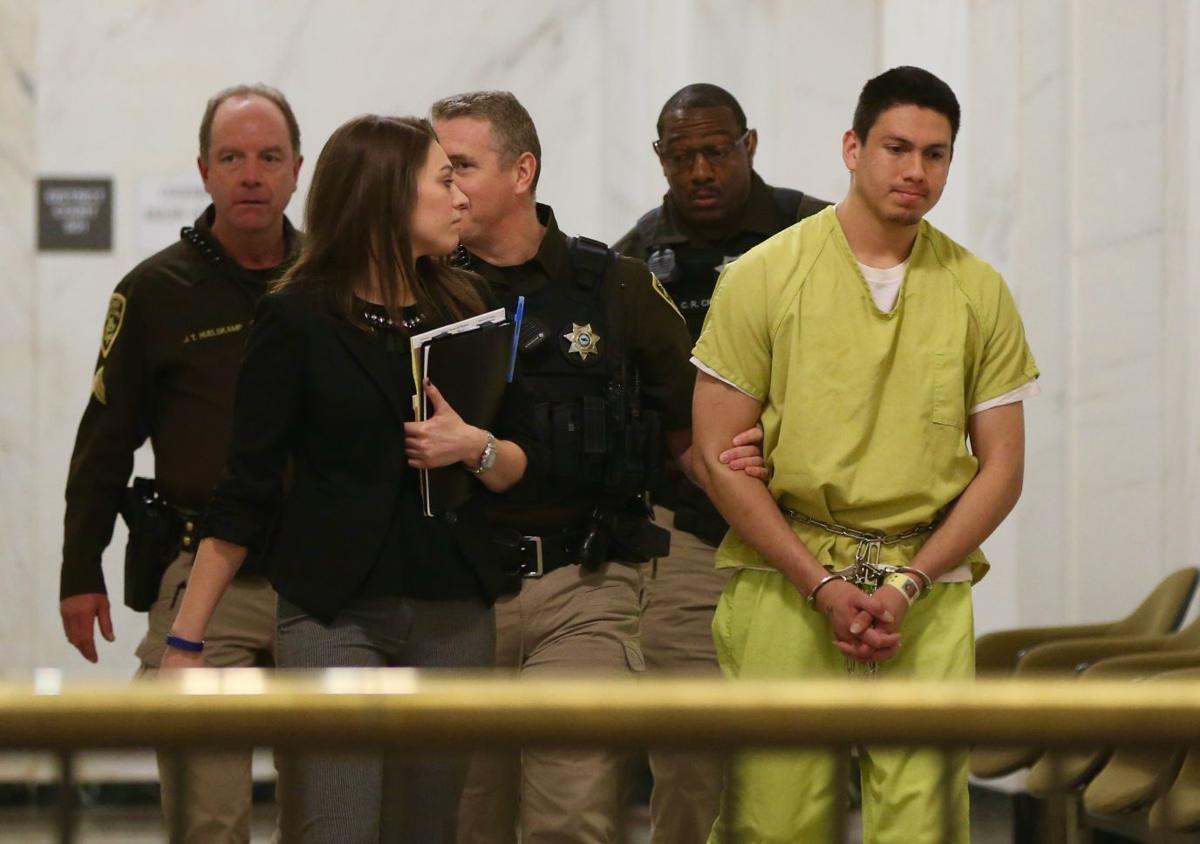 Roberto Martinez-Marinero, who is accused of stabbing and killing his mom and of throwing his little brother over a bridge and into the Elkhorn River, is led to a courtroom at the Douglas County Courthouse on Wednesday. 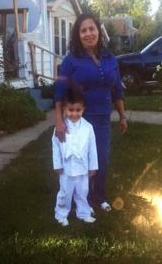 He killed his mother in a fit of rage, apparently losing it over a running dispute about money.

Roberto C. Martinez-Marinero, 25, then went on a half-hour drive and threw away two innocent witnesses  to the crime.

Why, in that 30 minutes, he didn’t take some time to ponder what he was about to do will forever haunt his family, the judge, prosecutors, defense attorneys — and Marinero himself.

Wednesday, Marinero pleaded guilty to two counts of first-degree murder in the May 5 deaths of his 45-year-old mother, Jesus Ismenia Marinero, and his 4-year-old half brother, Josue. Marinero brutalized his mom by hitting her in the head with a baseball bat and stabbing her more than 20 times in the head, neck and torso. Then, in an attempt to eliminate witnesses, Marinero threw Josue off the West Center Road bridge over the Elkhorn River.

On the way to the river, he put Angel Ramirez-Marinero, his 11-month-old half brother, in a dumpster in La Vista. The child was found and survived.

Josue’s body was discovered May 11 about a mile south of the bridge. He died by drowning.

“Frequently, you ask, ‘Roberto, OK, why?’ ” Douglas County Public Defender Tom Riley said. “And there’s no logical answer that can be given.

“Roberto told us there is no defense to what he has done. He was angry with his mother, and then he panicked.”

Marinero would have pleaded guilty the day after he was charged had his attorneys allowed him to, Riley said.

Marinero had admitted his acts to family, friends and even police — making Wednesday’s plea a mere formality and further compounding the question that dogs this tragedy. That is, if Marinero was going to admit everything, why did he get rid of his 4-year-old brother?

“I want to know, Roberto, why did you do it?” an aunt, Reina Marinero, asked Marinero in court Wednesday.

There was no answer. There are no answers.

“It doesn’t make sense,” said Veronica Rosa, Marinero’s cousin. “He’s my cousin — I’m nobody to judge. I’ve told him I love him. And I do. But if he’s guilty, he deserves it.”

Neither his mother nor his half brother deserved their fates, Reina Marinero said Wednesday. Roberto and his mother had been fighting for weeks — Roberto was a suspect in a burglary and arson of Ismenia Marinero’s home.

The tension came to a head May 5.

The argument got so heated that Ismenia slapped or swatted at Marinero. He exploded, stabbing her more than 20 times and hitting her in the head with the baseball bat. After killing her, prosecutors say, he and his girlfriend, Gabriela Guevara, hauled her body to a car, then dumped her near Fourth and Cedar Streets.

After dumping her, Marinero decided to get rid of witnesses. He grabbed Ismenia’s 4-year-old son, Marinero’s half brother Josue, and his baby brother, Angel, and put them in his vehicle.

On the way, Marinero left Angel in a dumpster near 84th and Harrison Streets — a trash bin that was scheduled to be emptied the next day. Fortunately, a passerby found Angel and rescued the 11-month-old boy.

Marinero and Guevara then traveled another 25 minutes, with Josue in his car seat, to the West Center Road bridge over the Elkhorn River.

Several months ago, authorities said they thought Josue was asleep when he was thrown into the river.

That may have been wishful thinking. Kleine said Wednesday the boy was crying as his brother ripped him out of the car seat.

Josue died by drowning. His body was found four days later, tangled in some trees, a mile south of the bridge.

“This pain will last for the rest of my life,” Reina Marinero told the judge. “And the punishment you have given him, he deserves it. It makes me feel good because ... he will never cause any other pain to any other family.

“I will never be able to forgive him. Not till God tells me to.”

His chin lowered near his chest, Marinero chose not to address the judge.

In fact, he said little at the hearing, save for “Sí” when the judge repeatedly asked if he understood his rights.

Riley said Marinero hasn’t been able to forgive himself.

Riley said Marinero, who had no record, grew up on his grandfather’s farm in El Salvador. His dad wasn’t involved in his life

Eventually, he paid “coyotes” — human traffickers — to bring him to the U.S. He rode on top of trains, was robbed and fought with other immigrants to sneak into the country.

After getting here, Riley said, he longed for his days on his grandpa’s farm in El Salvador.

It’s not clear whether that was part of his resentment toward his mother.

“Those were happy days in his life down there,” Riley said. “He came here because he had relatives here ... of course, with tragic results.”

Riley, a 40-year veteran of the Douglas County Public Defender’s Office, said he had a hard time reconciling the soft-spoken young man he met with the unspeakable acts he committed.

“When you first hear the facts of the case, they’re shocking,” he said. “Then when you go and meet the accused in jail ... it just seems unreal that the person I just spoke to who is soft-spoken and respectful could engage in this.”

“Whenever you talk about these kinds of cases, they’re very emotional,” Kleine said, catching himself. “It’s just draining when you think about the last moments of that little boy’s life — and his mother’s life.”

“The thought process (Marinero) had — some things you try and analyze, you try and figure out, you try to understand. And sometimes, it’s impossible.”

Gabriela Guevara had argued that she was so traumatized by, and scared of, Roberto Martinez-Marinero that she couldn't knowingly waive her right to remain silent with police.

Gabriela Guevara’s defense attorneys, Mallory Hughes and Sean Conway, had been setting up a Caril Ann Fugate defense: that, just as Charles Starkweather’s girlfriend alleged in his 1950s murder spree, Guevara had no control over what her boyfriend would do. Monday’s plea scraps that defense.

A 25-year-old woman went into a panic when Omaha police drove her to an Elkhorn River bridge so she could show them where, she says, her boyfriend threw his 4-year-old brother over the railing.

'There are no words to explain what we feel, the pain': Family mourns slain mom, 4-year-old thrown in river

The torture of waiting for word on the fate of 4-year-old Josue Ramirez-Marinero during a four-day search of the Elkhorn River turned into devastation for his family after his body was found Monday.

'Unspeakable' acts: 4-year-old was alive when he was thrown into river, law official says

Roberto C. Martinez-Marinero. 25, reportedly admitted that he killed his mother, left his 11-month-old brother in a dumpster in La Vista and then threw his 4-year-old half brother, Josue, over a guardrail and into the Elkhorn River. Josue's body was found Monday.

Gabriela Guevara had pleaded no contest to being an accessory — for helping boyfriend Roberto Martinez-Marinero carry his mother’s body to a car and then helping him dump her in southeast Omaha.

Roberto Martinez-Marinero, who is accused of stabbing and killing his mom and of throwing his little brother over a bridge and into the Elkhorn River, is led to a courtroom at the Douglas County Courthouse on Wednesday. 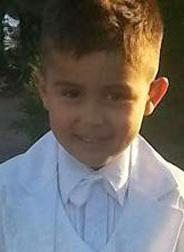 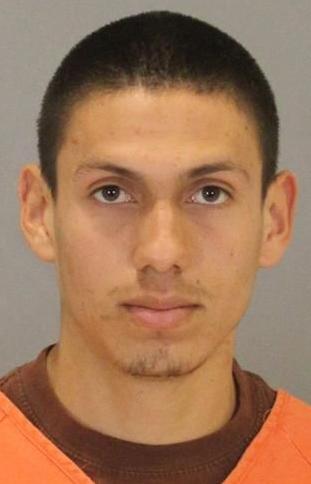