NBA Finals: Scores and updates as the Heat vs. Lakers tip off

LINCOLN — As promised, an advocacy group has filed a lawsuit seeking the end of private management of child welfare cases in Douglas and Sarpy Counties.

The lawsuit by Nebraska Appleseed follows through on a threat issued last week by the Lincoln-based group that advocates for the children and the poor, among others. It seeks to block a seven-year “pilot project” of hiring private companies to manage care of foster children in the two metropolitan counties.

The lawsuit, filed in Lancaster County District Court, claims that allowing privatization in Douglas and Sarpy Counties violates a clause in the Nebraska Constitution barring “special legislation” by allowing the state to manage child welfare cases in 91 counties in Nebraska, but not in the two eastern Nebraska counties.

An Appleseed official said that the Nebraska Department of Health and Human Services should provide “a strong and stable child welfare system” to the state’s children and families, “regardless of where they live in the state.”

The department, “as the legal parent of children in foster care, has the fundamental responsibility to provide equal access to care, treatment and services to children across the state,” said Sarah Helvey, director of Appleseed’s Child Welfare Program.

A spokesman for the Health and Human Services Department said the agency does not comment on pending lawsuits.

The department, a decade ago, tried to privatize management of all foster children’s cases statewide in an attempt to save money. But the attempt failed with all but one of the private contractors quitting or being terminated.

In 2012, the Nebraska Legislature opted against privatizing across the state, but allowed an exception for the Omaha area, allowing the lone remaining contract in Douglas and Sarpy Counties, held by an organization called PromiseShip, to continue as a pilot project. 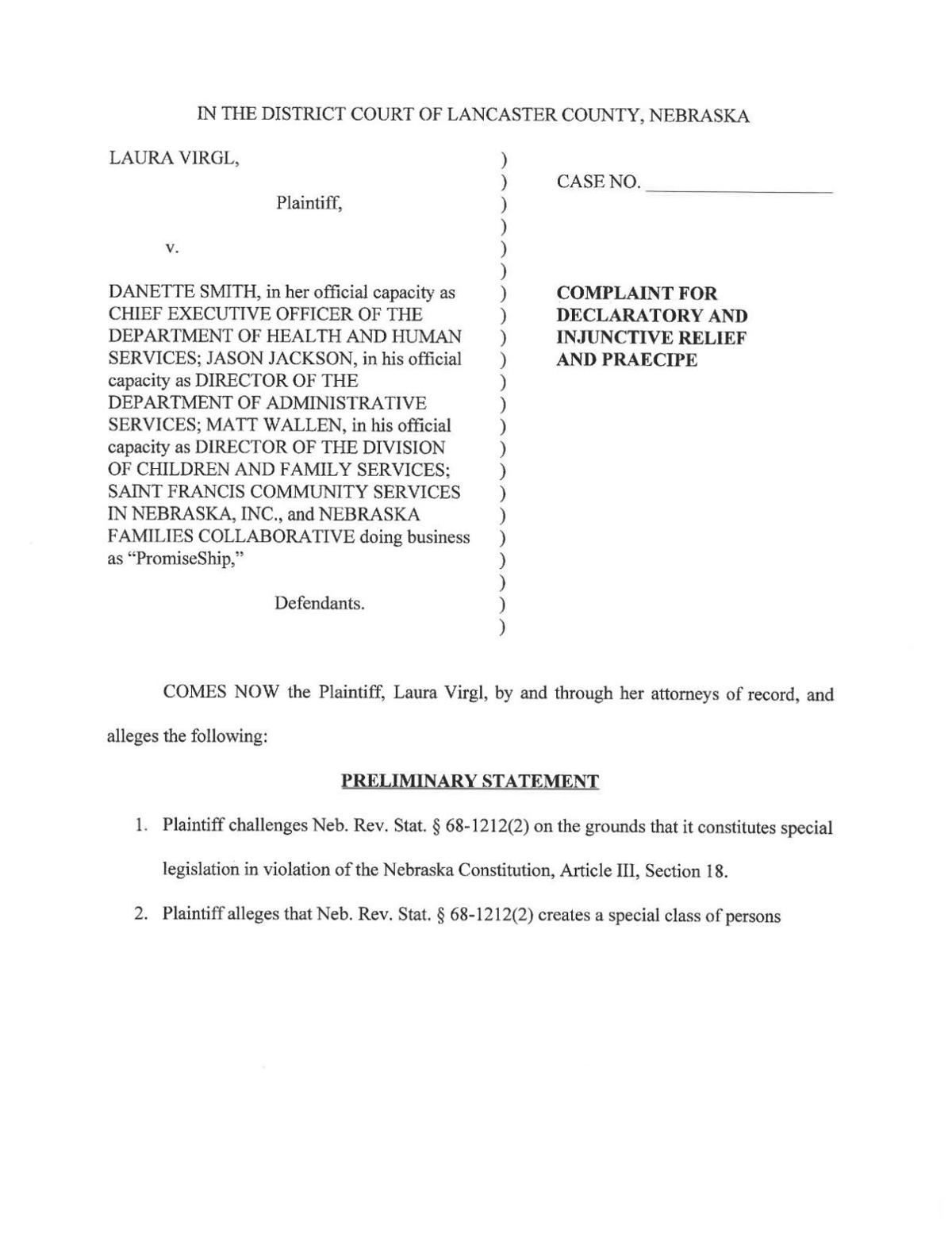 Three months ago, the state decided to switch contractors, awarding a new contract to a Kansas-based entity, St. Francis Ministries, which bid to perform the work for five years for $197 million. That was far less than the $341 million bid from PromiseShip. The swap prompted criticism of St. Francis’ track record, and a protest by PromiseShip, the current provider, over the awarding of the bid; PromiseShip is a nonprofit formed by Boys Town and other private, Omaha-area child welfare agencies.

Last week, Appleseed sent a “demand letter” to DHHS, giving the state a week to drop the privatization effort. It called on the state to resume case management work in the two counties, or face a lawsuit.

The “special legislation” clause in the Nebraska Constitution bars different — or special — treatment of Nebraskans in similar situations. The Appleseed lawsuit said that switching contractors now in the Omaha area would cause disruptions in services and that the rationale for allowing PromiseShip to continue its pilot project no longer applies if a new contractor is being hired.

Nebraska Appleseed argues in a letter to state officials that the contracts violate the Nebraska Constitution’s prohibition against special legislation, that is, legislation that treats similar groups of people differently. It gave the state one week to comply or face a lawsuit in Lancaster County District Court.

St. Francis' bid to do the job was less than 60% of the amount now being spent to care for children and families, a difference that troubles key state lawmakers and child advocates. The request for more money added to worries about the contract's feasibility. Tom Blythe, president and chief executive officer for St. Francis, said the nonprofit is "fully prepared" to satisfy the conditions laid out in the contract

PromiseShip will add St. Francis Ministries of Salina, Kansas, as a defendant after a Lancaster County judge said he would dismiss the suit if the Kansas nonprofit wasn't added within 30 days. The lawsuit alleges that St. Francis' bid should have been disqualified for failing to meet the terms of the request for proposals or comply with state law.

Kathy Bigsby-Moore, the founding executive director of Voices for Children in Nebraska and a former PromiseShip board member, said the contract with St. Francis would put children at “unnecessary risk of further trauma, neglect and uncertainty.”

St. Francis’ history in Kansas has drawn concern from some Nebraska lawmakers and child advocates. In particular, they cite concerns about foster placement stability, case manager workloads and costs. "Saint Francis will meet all expectations outlined in our Nebraska contract and conform to all applicable state regulations and laws," a spokeswoman said Wednesday.

St. Francis’ history in Kansas, along with its proposal for the Nebraska contract, worry some Nebraska lawmakers and child advocates. In particular, they cite concerns about foster placement stability, case manager workloads and costs.

St. Francis Ministries, based in Salina, Kansas, offered to handle child welfare case management in Douglas and Sarpy Counties over five years for $197 million, less than 60% of the $341 million bid from PromiseShip. The two were the only bidders for the contract.

Privatized child welfare in Omaha area has been neither wildly successful nor a failure, report says

St. Francis Ministries had been slated to take over child welfare case management from Omaha-based PromiseShip on Jan. 1. The head of Health and Human Services said the state wants to move up the start date because it wants a gradual changeover between the two private contractors, to avoid potential setbacks and disruption of service to children and families.

Health and Human Services CEO Dannette Smith said, "(We) will not make changes to protocols that are not thoroughly researched and consistent with industry best practice."

The judge’s order said public entities have broad discretion when selecting contractors. He said PromiseShip appeared unlikely to be able to prove that the choice of St. Francis was “arbitrary or motivated by favoritism, ill will or fraud.”

In a briefing for state lawmakers, officials said about 300 cases had been moved from the Omaha-based PromiseShip to the Salina, Kansas, nonprofit, along with 20 case managers since Monday.