A 38-year-old woman killed in her home Sunday had been involved in an abusive relationship with a man who served prison time for assaulting her.

Officials arrested Anthony Burries, 42, in Odessa, Missouri, Monday night and charged him with first-degree murder in connection with Hoult’s death.

Hoult said in a 2012 protection order against Burries that she feared for her life after he punched her repeatedly in the face at her apartment on Dec. 1, 2012. In the protection order, she described Burries as possessive, controlling and unpredictable.

She suffered a black eye, a bloodied lip and was transported to the hospital by ambulance. Burries was charged with two counts of domestic abuse — both misdemeanors.

Judge Joseph Caniglia imposed a maximum sentence on both counts, giving Burries a year in jail on each charge, and ordered him to serve the sentence consecutively.

Under state sentencing guidelines, his sentence was cut in half, so he served a year.

Burries requested and was allowed to serve his term in the Nebraska Penitentiary, a place he had been twice before.

A month after Burries went to prison, Hoult dropped the protection order. She said in court records that she didn’t believe he would retaliate and that she forgave him. Hoult and Burries dated for several years and had known each other for at least 12 years, Hoult said.

Burries was released on Nov. 29, 2013. Nearly six months later, Hoult was killed in the same apartment that Burries listed as his address on Dec. 1, 2012.

Burries served prison terms from 1989 to 1992 and from 1994 to 1999. In 1989, Burries was convicted in Sarpy County of theft and operating a vehicle to avoid arrest. He also assaulted an inmate while behind bars.

The second time he landed in prison was for possessing a firearm as a felon, using a firearm to commit a felony, unlawful discharge of a firearm and attempting to leave the state while on parole.

“She was an amazing woman who is gone too soon,” said Leffler, 28, of Grand Island.

She described Hoult as charismatic, outgoing, blunt and stubborn.

Leffler and Hoult were more like sisters than cousins, Leffler said. A conviction will help Hoult’s relatives heal, Leffler said, but they will never have closure.

Friends of a woman killed over the weekend gathered Tuesday night to honor her life outside the apartment where she died.

Anthony Burries had beaten up his girlfriend, Tina Hoult. On that, both prosecutors and defense attorneys agreed Thursday. But did he kill her? That will be the central question of Burries' trial, which is expected to last through most of next week. 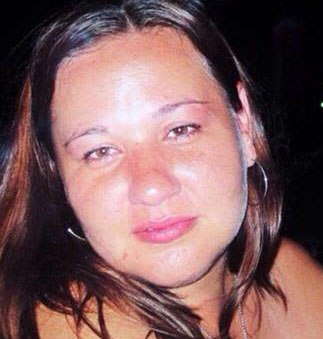