Virus briefing: US tops 5 million cases, with no end in sight

Since Friday, Omaha police have arrested 306 people involved in protests over police misconduct and the death of two black men, one in Minneapolis, one in Omaha.

The Omaha Police Department provided preliminary data, including a demographic breakdown and charges, for 262 of those arrested. The remaining 44 were booked into the Sarpy County Jail after Monday night’s protests in the Old Market, most for curfew violations.

Most of the protesters, many of whom are younger than 30 years old, were arrested on suspicion of breaking Mayor Jean Stothert’s 8 p.m. curfew, failure to disperse, unlawful assembly or a combination of the misdemeanor charges.

A smaller number of charges were more serious, such as resisting arrest or assaulting an officer, and 11 people were charged with various gun or weapons offenses, including possessing or concealing weapons. Monday night, police confiscated two handguns.

While police and others have blamed outside agitators for property damage and violence, the majority of those arrested — 244 out of the 262 — live in Omaha, Council Bluffs or other surrounding cities.

A small number came from other areas of Nebraska or western Iowa — Lincoln, Macy, Columbus, Morse Bluff — and four had Kentucky, Washington or Kansas addresses.

Nearly 75% of the 262 arrested were males. Just under 50% were white, 36% were black, 12% were Hispanic and the rest were Asian, Native American or another race or ethnicity.

Hundreds gathered Monday in the Old Market. It was the fourth straight night of protests against the killing of Minneapolis resident George Floyd.

The protesters also advocated for justice for Omahan James Scurlock, who was fatally shot Saturday night in downtown Omaha.

Douglas County Attorney Don Kleine announced Monday afternoon that he would not be filing charges against the downtown bar owner, Jake Gardner, who shot Scurlock as the two scuffled on the ground.

According to Omaha police jail booking records, about 120 people were arrested Sunday night into early Monday on suspicion of breaking curfew or failing to disperse.

Omaha City Council votes to extend city's state of emergency, which could lead to extended curfews

Whether Stothert will choose to issue a curfew for the coming nights was expected to depend partly on how protests played out Tuesday. By the 8 p.m. curfew, a smaller group of protesters outside the Douglas County Courthouse had dispersed.

In a change from Monday’s comments, Douglas County Attorney Don Kleine said that he is “weighing the potential” for a grand jury to look into the killing of James Scurlock.

Omaha police say an altercation between Calvin Strong Sr. and Charles Turner led to Strong's death and that they are investigating the death as a homicide.

Omaha police said they are looking for the person who was shoved minutes before the altercation between the Hive and Gatsby bar owner Jake Gardner, Scurlock and others.

Mayor Jean Stothert and Omaha Police Chief Todd Schmaderer said that after observing the protests Tuesday night, they felt comfortable rescinding the curfew that locked down the city from 8 p.m. to 6 a.m. Sunday, Monday and Tuesday.

Offutt leaders are discussing the possibility of holding a virtual town hall meeting at Offutt that would address race and discrimination.

Omaha police believe the public has video evidence that can assist in arrests. 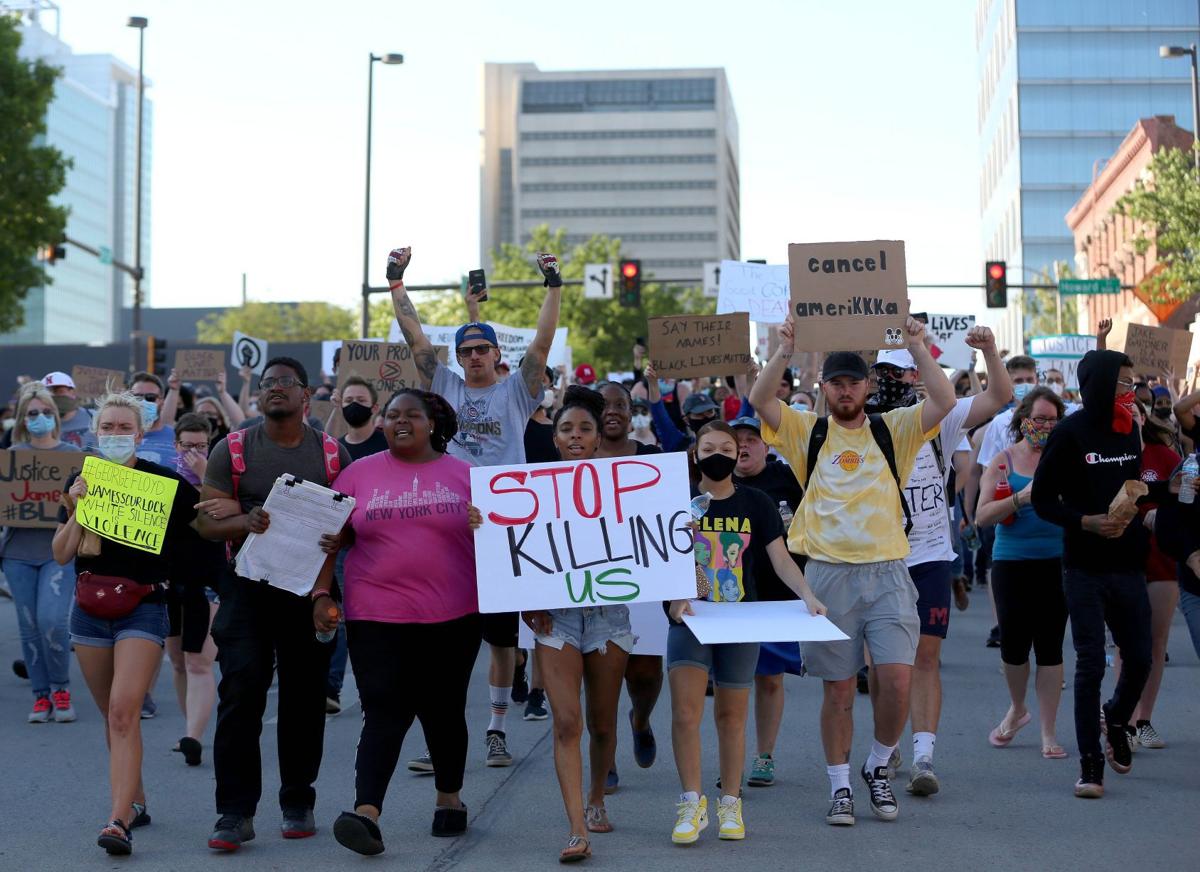 A group marches down 13th Street on Monday in Omaha. 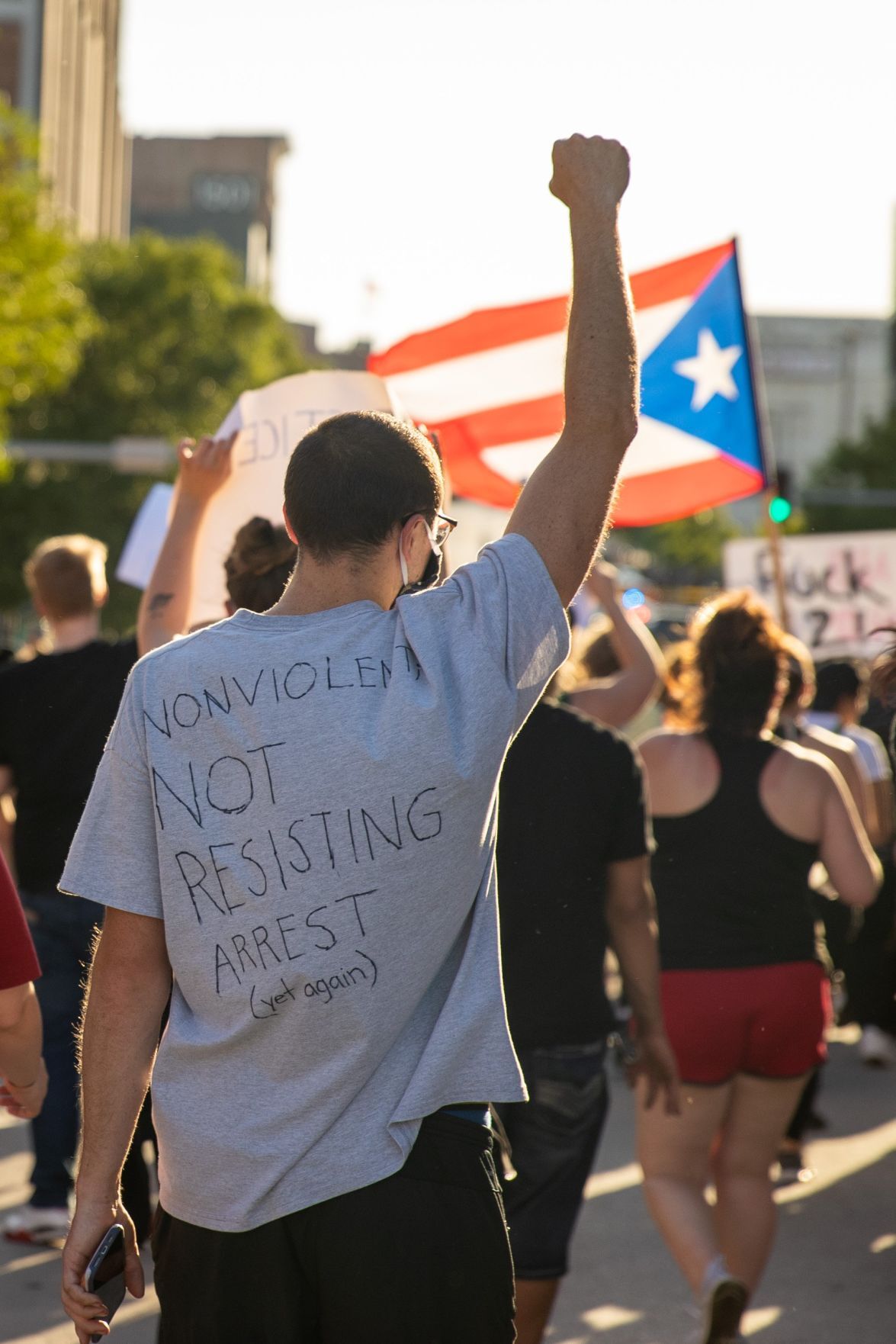